Disney Channel just debuted a new episode of Sydney to the Max on DisneyNow with a television premiere on April 2nd at 8:30/7:30 c. In this special episode, we get to meet Sydney’s mom as an 8th grader in addition to finding Sydney trying to make Harry her boyfriend. Here’s a recap of the episode “He’s All That.” 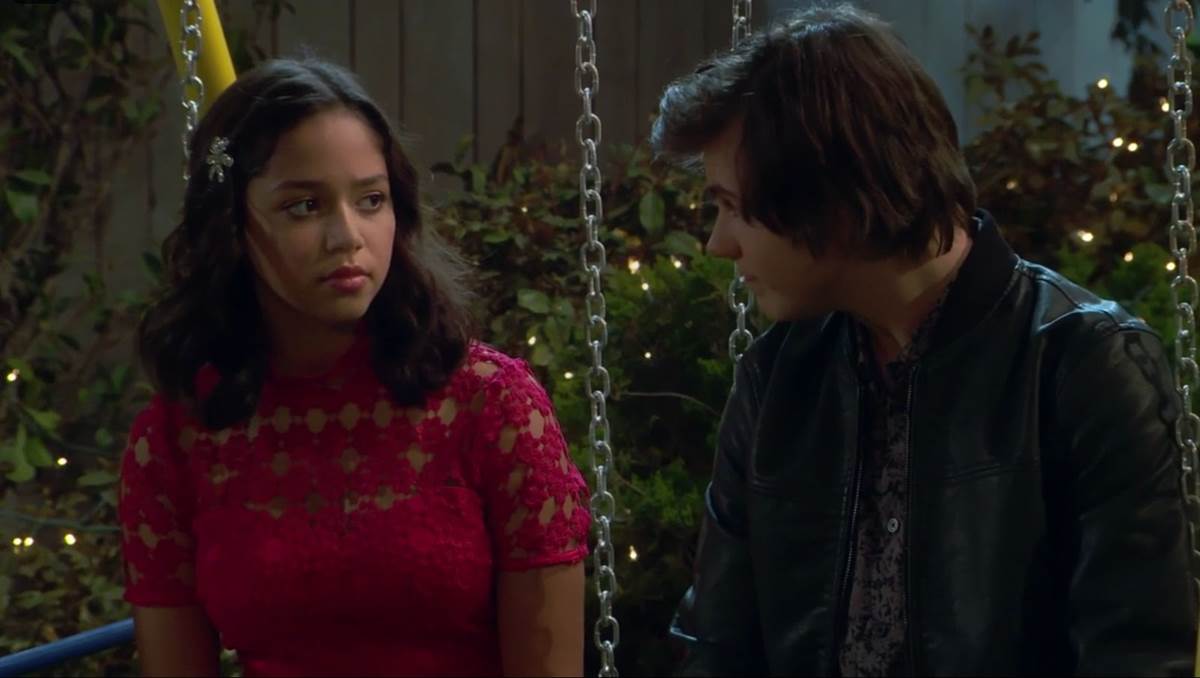 While having a sleepover party where Sydney and her friends are wearing cosmetic face masks, Sydney gets a video call from Harry in London. Peeling off her mask, he tells her that he’s moving back to Portland permanently. Sydney tells Max when he comes in and he’s excited to get his friend Randy back. Looking at the package, Sydney says “They’re not lying, these masks really do work miracles.”

The big day has arrived and Sydney is nervously trying to pick the right earrings with the advice of her friends, who think Harry must really like Sydney because he called her in the middle of the night London time. Sydney’s history with Harry goes back to when they were kids together at camp and she made him a macaroni necklace, which she thinks he’s going to give back to her as a romantic gesture.

Max is in the kitchen cooking food for Randy singing a happy kitchen song he learned from his deceased wife Alisha. Judy doesn’t care for Randy so she leaves as Randy and Harry arrive. Harry and Sydney hug and Harry tells her that he missed Portland. He tells her he brought her something, giving her a pen he borrowed and forgot to return. “I kinda thought it would be something I made for you when I was really young,” she tells him and Harry says the macaroni necklace is probably in one of his suitcases.

Max ordered 4 anchovy peanut butter banana pizzas from Enzo’s and a delivery man named Iggy compliments his tastes, but he ordered them for Randy because they’re his favorite. He’s bummed when Randy tells him he and Harry can’t stay for dinner and they have to go. Sydney asks Harry if they can hang out tomorrow and he says “Maybe, let me check and get back to you.” Both Sydney and Max feel let down that they left so soon and Sydney is questioning if Harry likes her as more than a friend. “So, you want any of this extremely gross pizza?,” Max asks Sydney.

At Reynold’s Rides, Sydney meets with her friends and tells them what happened. They think Harry was just trying to play it cool and that Sydney should do the same. She texts him to say she’s too busy to hang out and we see Harry in his house full of boxes as Iggy arrives to deliver a pizza to him. Iggy may not be bright, but he notices Harry is bummed and Harry reveals that he was hoping to ask Sydney to the first school dance at his prep school.

The next day, Max is setting the table because Randy is coming back over. Judy asks if he’s actually staying for dinner this time and Max tells him it’s confirmed. Seeing his phone, Judy notices that Max sent Randy 12 texts in a row and says he’s being too desperate. She steals the dinner he made, saying it’s to make him not look needy but also revealing that it’s her turn to make dinner for her sorority sisters and she forgot about it.

Sydney opens the door to let Randy and Harry in, acting like it’s not a big deal that he came over. Harry asks if she’s busy tomorrow night and she says “Let me check and get back to you.” Randy comes out of the kitchen and tells Harry Max didn’t think they were staying for dinner, they leave to go get food.

Sydney tells her friends what happened again and one of them reveals that Harry might have been trying to invite her to the  Portland Prep dance happening tomorrow. At Harry’s, Iggy delivers another pizza and gets an update on his love life. Iggy tells him to text Sydney that he’s going to the dance with friends, which should make her jealous. At the same time, Sydney was about to text him that she’s free tomorrow, but Harry presses send first. Sydney thinks Harry really isn’t into her.

That night, Max finds Sydney looking sad in her room, checking her phone to see if anyone is posting pictures from the dance. “Oh, the old play it cool only to watch it blow up in your face thing,” he tells her, having gone through the same thing with Randy after taking his mom’s advice. Sydney decides they should both trust their instincts and she goes to change, deciding to head to the dance to find Harry.

A little while later, Sydney returns home dejected, having searched the dance for Harry to no avail. With no ice cream in the freezer, she decides to check the garage and she finds Harry sitting on her backyard swingset. He tells her he left the dance after one song because he felt like he shouldn’t be there without her. Sydney apologizes for trying to play it cool. Harry pulls out the macaroni necklace and gives it to Sydney, who puts a song on her phone so they can share a dance.

With Randy and Harry over, Grandma Judy makes dinner and Max and Sydney warn them that he cooking is bad. She brings out chicken parmesan and it’s actually good. She reveals that it’s a recipe she learned from Sydney’s mom Alisha, a callback to Max’s story from this same episode. Max arrives at the arcade to find Leo with lots of prize boxes to unpack. Leo’s aunt is in town along with his cousin Alisha, who shows up at the arcade just as he mentions her name. A customer points out that the Crush-A-Mole machine is broken and Alisha fixes it with a kick, having lots of experience at her family’s arcade. Max is impressed and tells Alisha she should work there, but Leo is not excited. “It’s bad enough she’s at my school and my house, now she’s gonna be here?,” Leo asks. “She’s like a human Crush-A-Mole.”

That night, Leo comes over to Max’s house to apologize for giving him a hard time about Alisha, only to find that his cousin is also there. She found Max’s sweatshirt and brought it back to him, but ended up staying and teaching him how to make chicken parmesan and teaching him and Judy a happy kitchen song. “Alisha is so much fun!,” Max tells Leo, who says he needs a break from her and leaves.

The next day, Alisha arrives at the arcade for her first day on the job and Max has just set up a new game. He tells her that it’s a tradition for he and Leo to break in the new games, but he foregos that plan to play it with Alisha anyway. Leo walks in to find them playing and tries to get Alisha to move aside so he can play, too. In the fight, Leo fires Alisha and Max gets upset. “If she’s leaving, I’m leaving,” he tells Leo as he walks out.

That night, Leo comes over again to apologize. “You were right, I was jealous,” Leo tells Max, explaining that he felt like he was being replaced. As Max starts to describe why he thinks Alisha is so cool, he brings up how she smells like strawberries and Leo realizes that Max has a crush on his cousin. Max denies it as Leo leaves to apologize to Alisha and rehire her.

Sydney to the Max returns April 9th with another new episode titled “Three Amigas and a Harry.” Here’s the full episode description:

Syd wants her three besties to become close friends with Harry and winds up putting too much pressure on herself to make sure everything goes perfectly when they all hang out.