This week’s episode of Sydney to the Max was directed by Danielle Fishel, who played Topanga on Boy Meets World and the Disney Channel spin-off Girl Meets World. In “Three Amigas and a Harry,” Sydney is trying to balance time between her friends and boyfriend while Max comes to the realization that he has a crush on Alisha, Sydney’s mom. Here’s a recap of this brand-new episode. 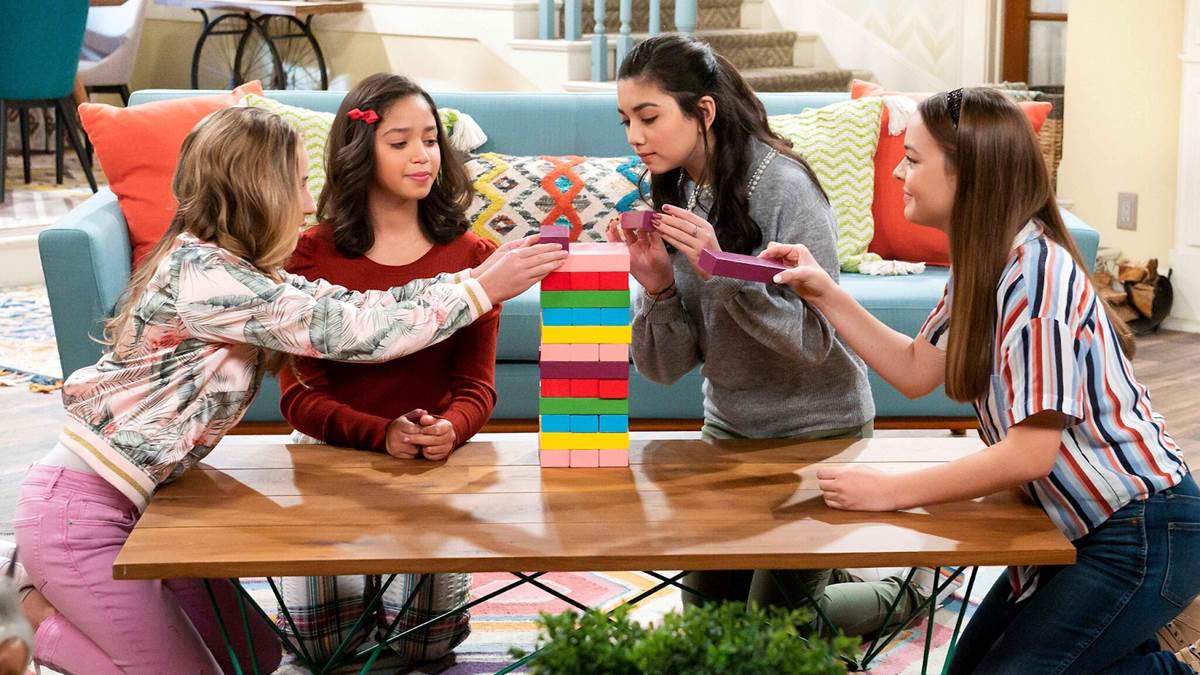 Finishing up a tour of Portland, Sydney and Harry enter the smoothie shop holding hands. Harry departs for the bathroom as Max approaches excitedly, asking his daughter if she was just holding hands with her boyfriend. She waves Grandma Judy over for help and she sends Max away, but then excitedly asks the same question and Sydney doesn’t mind sharing the details with her.

At the bike shop counter, Harry’s dad Randy comes in and tells Max he got them tickets to see the Monster Mayhem Truck Rally. Max asks his mom if she can watch the store so he can go and she tells him he won’t like the show now that he’s older. She agrees to cover so that she can say “I told you so” later.

Olive and Sydney’s friends arrive at the smoothie shop and also see Harry touch Sydney’s hand as he makes his exit. Sydney notices that Olive is wearing a cold new jacket and she tells Syd that she and the girls were at a pop-up flea market where she found it. Sydney feels left out, but they say they didn’t invite her because they knew she would be with Harry. “I wish Harry time and Amiga time could be the same time,” she says, asking the girls if it would be okay if Harry joins their game night.

Just as game night is about to begin, Max comes home with dirt all over his clothes, yelling because the truck show was so loud that he doesn’t know the volume of his voice. Harry arrives after the girls start playing “Tumble Tour” (a wooden block stacking game). They ask Harry to go first and the blue block he pulls out has a drawing of a bird on it, which prompts all the girls to run around like birds. They’ve played the game so many times that they added side rules, which he doesn’t know. Per the new rules, he should go again but with his eyes closed for not pretending to be a bird, but Sydney says Olive should do it since Harry didn’t know the rules. The block Olive pulls out has a drawing of a ball of yarn on it and the girls have to find a ball of yarn and try to throw it into the sink from across the room. Olive is successful at completing the challenge and should’ve won the game as a result, but because Harry didn’t know the rules, Sydney suggests they just drop the side rules and play the traditional way. Olive is disappointed and Harry says he doesn’t want them to change the game on his behalf, choosing to leave and let the girls play the game their way. “Well, that was a complete disaster,” Sydney exclaims.

The next day, Grandma Judy finds Max sleeping on the counter at the bike shop. She tries to get him to admit that he didn’t like the truck show but he refuses. Instead, he tells her he wishes he could go to the show every day. Just then, Randy walks in with more tickets for tonight’s show, this time in the “Crash zone.” Max tells Randy he couldn’t ask his mom to cover for him again, but she’s standing close enough to hear and gleefully says “I’ll do it.”

Sydney is sharing smoothies with her friends and says it was a mistake to have Harry join them for game night last night, but that she and Harry were going to watch his favorite British baking show tonight. She invites the girls to join them, but they’re not familiar with the show. That night, they talk throughout and ask lots of questions, causing Harry to miss some important moments. Realizing that they’re ruining it for him, Olive and the girls decide to leave before the show is over. Sydney decides that she’s going to split her time between Harry and her friends going forward.

Max asks his mom not to cover for him to get him out of going to the truck show again, saying he’s afraid to tell Randy that he didn’t have a good time because he might lose a friend over it.  “It’s the rabbit all over again,” Judy tells him, referring to Max’s story in this episode. Randy enters the shop with Harry and Max is honest with him, saying he no longer likes the monster truck shows. Randy jokes that they can’t be friends anymore before revealing that spending time with Max was his favorite part of the show.

Sydney’s friends come in and see Harry alone, apologizing for running the show for him. He apologizes for ruining game night and they sit together, talking about the one thing they have in common: Sydney. When Sydney walks in, she’s surprised to find them all sitting together. They make a plan to go to Corey’s Crazy Cones for ice cream together. At the end of the episode, they’re in Sydney’s living room playing “Tumble Tour” and Harry has not only learned the side rules, but he added a new one that Sydney didn’t know about.

At the arcade, Leo is trying to make weekend plans with Max to go see the new “Detective Rabbit” movie, forgetting that Max is afraid of rabbits. It turns out that when Max was in kindergarten, a petting zoo mishap caused him to be bombarded by bunnies and he’s afraid of them now. Max tells Leo that his weekend plans are to spend as much time as possible at a new skate park and that nothing could change his plans. But when Alisha walks in and tells him she needs help with a science fair project about how different items affect heart rates, he volunteers. “Well the verdict’s in,” Leo taunts his friend. “Max is officially guilty of having a crush on Alisha. If I had a gavel, I’d pound it.”

On Saturday, Alisha and Max come back into the arcade where Leo is working. He finds out that Alisha got max to eat broccoli and try yoga as part of her experiment. When Alisha goes in the back to get ready for her shift, Leo questions how much Max is changing for Alisha, which he denies. But when Alisha comes back out, she reveals that tomorrow’s experiment will require Max to hold a bunny. He acts like he’s fine with it, but he’s secretly freaking out.

The next day, Max tries to watch the first “Detective Rabbit” again and is scared of it. His mom walks through and asks why he’s watching a movie he’s so afraid of. He tells her about Alisha’s experiment and Judy walks away with a knowing look in her eye. Leo comes to the door saying he’s there to bail Max out of the experiment, reminding him about that one time at a birthday party when he almost fainted because a magician pulled a rabbit out of a hat. Just then, Alisha arrives with a bunny in a cage, introducing him as “Sprinkles Von Twinklebutt.” While Alisha gets her stethoscope ready, Max steps close to the cage and tells her he felt his heart rate decrease and then steps back. She tells him she needs to listen to his heartbeat while he holds Sprinkles and once the rabbit is in his arms, Max actually calms down, lowering his heart rate like Alisha’s hypothesis. She tells Max he’s the best as she goes into the kitchen to fill Sprinkles’ water bottle. Max sits on the couch in a daze and says “Leo, I totally have a crush on Alisha.” Leo scoffs, saying “Yeah, I’m pretty sure even Von Twinklebutt figured that out.”

Sydney to the Max will be back April 16th with a new episode titled “Boy Story.” Here’s the episode description: