Melissa De La Cruz is a radically amazing person. While that isn’t the most professional terminology to highlight her career successes, you can’t argue that it applies. A writer of buckets of books, her resume makes me worry that she doesn’t have time to sleep. Since coming into the Disney fray, she has written the highly successful Descendants series, with Isle of the Lost spending fifteen weeks at #1 on the NYT Bestseller list. 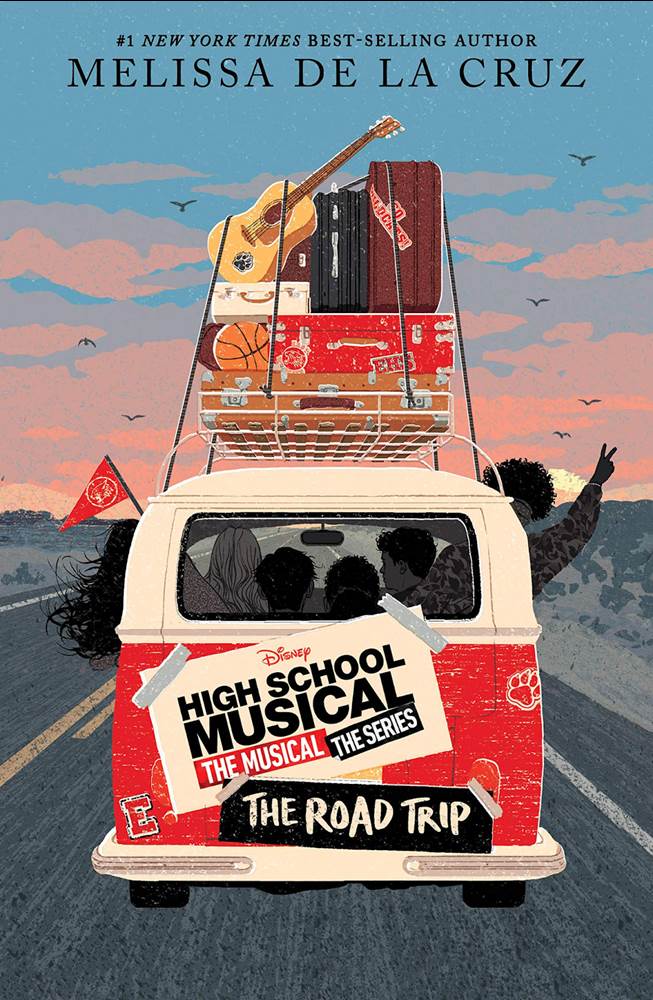 Stemming from that success, among others, her YA novel 29 Dates is becoming a Disney+ original movie and her Melissa De La Cruz Studio at Disney Publishing will now package and produce middle grade and YA books for a wider audience. She is now, without a doubt, an essential part of the Disney family.

All this in mind, it makes sense that she was asked to tackle the last young adult juggernaut for the company with High School Musical: The Musical – The Series. As a bridge piece connecting the first and second seasons of the show, The Road Trip follows our favorite East High students as they venture on a last minute trip to a High School Musical convention.

Now, if this brings in a new generation to reading through the optimization of a rabid fan base, be my guest. Unfortunately, this book is not…good. It’s seven different things thrown together, bound with a hardcover, and sold with no real need.

The guise of this story is through various points of view. Every chapter is written from the viewpoint of a different character. Carlos, Courtney, Gina, Nini, and Ricky get normally formatted chapters, while in the first 50 pages we also receive EJ’s “Instagram Interludes” and a listicle from Miss Jenn. A whiplash treatment plan comes with every copy of the book.

On top of this, the story just isn’t necessary. To compare to the other world-building series Melissa has written, Descendants is ripe for these interstitial stories. We can learn backstories for the villain kids, frenemy origins, or just a side adventure. HSM isn’t necessarily the type of property that is well suited for this type of storytelling.

The story opens on the Carlos chapter and I was immediately a little off-put as the dialogue read as disingenuous. It was an instance of someone trying to write in the voice of a teen that isn’t a teen. Pepper in some wording that made me slightly uncomfortable (The energy of it could be best described as, “Oh honey, I know he’s the gay one, so let’s gay it up!”) and we’re off to a shaky start.

The book meanders through Nini and Ricky’s love story, Courtney’s need to break out into the spotlight, Miss Jenn’s fascination with Lucas Grabeel, and one of Sharpay’s dogs. It’s just too much for a middle-grade novel that didn’t need to exist in the first place.

Maybe I’m being too harsh on this book, as I am clearly not the key demo. Yet, as a fan of the show, I respect it’s ability to not talk down to it’s viewers. The content on the show was for a younger demographic, but it’s never neutered for its audience. This book, unfortunately, does the office. It’s sanitized for no one’s real benefit.

I had the wonderful chance to speak with Melissa (and Dove Cameron) a few years back and it was a wonderful time. During our discussion, the conversation about the Descendants series was that it was always intended to be multi-platform. It would be an overarching, multiple-platform franchise. It showed in the book, as the writing and the series as a whole melted together effortlessly. Unfortunately, it feels like this HSM novel was an afterthought and, because of this, the need for a written bridge story isn’t there.

Melissa being the face of Disney Publishing is so phenomenal, especially now that she has her studio. I love Melissa! She is a kind, wonderful writer who now gets the control and power she deserves. However, can we not ask her to write these types of books if there isn’t a purpose?