Sydney and Max are back in Disney Channel’s newest episode of Sydney to the Max, titled “Boy Story.” In this episode, Sydney continues to struggle to find the right balance between her boyfriend and the rest of her life while Max in the past tells a lie about Alisha to try and spend more time with her. Here’s a recap of this new episode. 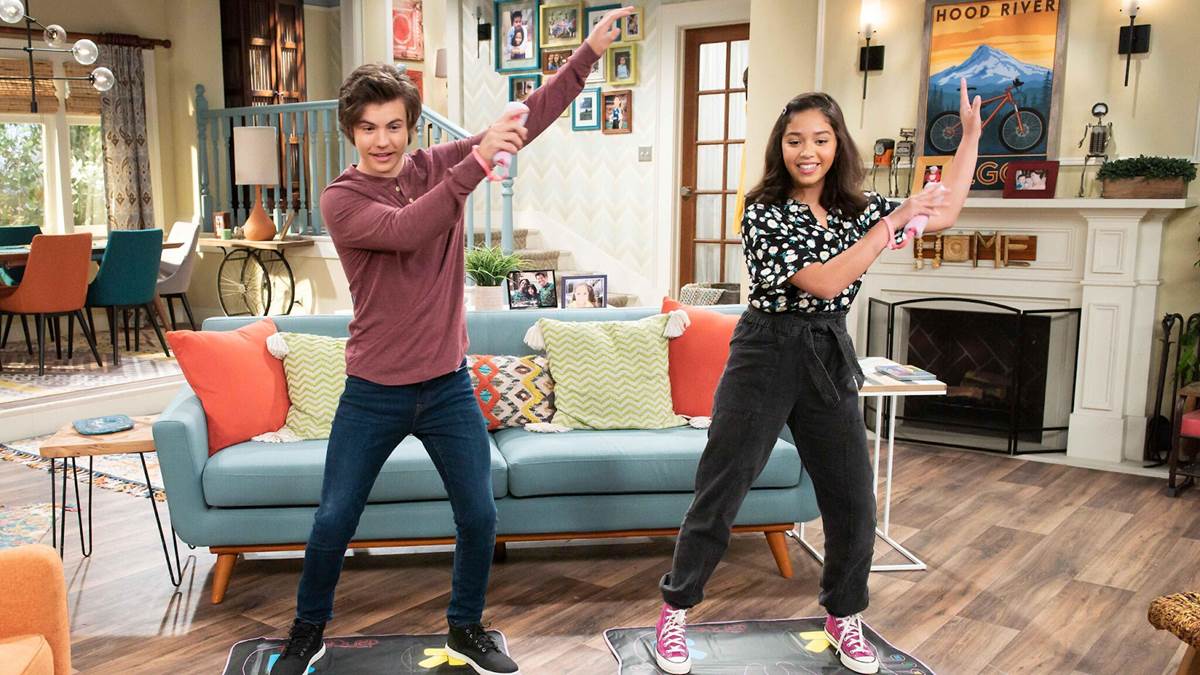 Sydney and her amigas are holding a study session in her living room, the first that Sydney’s attended in a while because she’s been spending so much time with Harry. Grandma Judy walks through the room showing off her new sorority pin, which she got for being there two years. The girls are trying to avoid another distraction when the doorbell rings and Harry surprises Sydney with a picnic in the park for their 1-month anniversary. Olive reminds Sydney about their study session and she decides to go anyway, leaving the amigas alone in her house.

The next day at school, all of the amigas got an A on their english test, but Sydney got a B-. She didn’t study because she was having too much fun with Harry, but she commits to studying with the girls on Friday for their math test, which she will do after going to the new skate park with Harry. As she leaves, Sydney is reminded that she’s supposed to be at a fencing practice right now, which she would have known about if she hadn’t left the last practice early to be with Harry.

At Reynolds Rides, Judy comes in to grab smoothies for her sorority sisters ahead of a photo shoot of them with thier pins when Max asks where hers is. She realizes it’s not on her shirt and starts freaking out, retracing her steps. Sydney comes in and Max offers to help her write her songs, but she can’t because she’s meeting Harry. Max asks if she’s spending too much time with him when the amigas walk in for another study session that Sydney forgot about. Sydney decides she’s going to tell Harry that she can’t go to the skatepark with him when he walks in, hearing her say “I just hope Harry understands.” The girls encourage Sydney to talk to him about what’s going on, but she chickens out.

Max is cooking dinner when Judy enters through the back door covered in trash, having searched theirs and the neighbor’s garbage for her pin. Max asks why she doesn’t just tell her sorority sisters that she lost it and she confesses to having already lost the house goat, so they will think she’s not taking them seriously. The amigas arrive for the math study group, but Harry keeps texting Sydney, distracting her. Olive suggests that maybe Harry doesn’t have any other friends, so they check out his social media and see it’s just photos of him and Sydney and the amigas.

Sydney has a plan to try and learn more about Harry’s friends, inviting him over to play her new dance video game while she asks a lot of questions about his friends. He talks about his friends in England and she asks if he’s made any since moving back to Portland. He gets bummed and says he’s danced out, leaving even as she asks him to wait.

That night, Max finds Sydney in her bedroom looking sad, who tells him what happened with Harry. “I can’t be his only friend,” she tells her dad. “He should be making his own life here, not just becoming part of mine.” Sydney wonders if Harry was spending so much time with her to avoid making friends of his own.

The next day, Harry finds Sydney on her swing set and apologizes. Sydney tells him not to be embarrassed, “It’s hard making new friends.” Sydney suggests that they spend some time apart and take a break from hanging out to give him the chance to make new friends. He agrees it’s the right thing to do. “It’s for the best even if it’s the worst.” Harry says.

Finding Sydney in the kitchen, Max tells her he’s proud of the way she was honest with Harry. Judy comes in wearing her pin, revealing that she tore apart her room and Max’s room looking for it when she remembered that she put it in her jewelry box where she “Wouldn’t forget it.” While digging through Max’s room, she found an old bracelet that would change colors when he lied (introduced in Max’s story from this episode), which he puts on. Sydney asks him if he’s ever read her diary and when he says no, the bracelet turns red. “Oh no, it still works!,” Max cries as he runs out of the room.

Max is behind the counter at the arcade using a giant novelty comb from the prize booth to make sure his hair looks okay in preparation for Alisha starting her shift. Leo tells Max to finally tell Alisha that he likes her when she walks in. Alisha is excited because an Exploration Emporium just opened in the mall, which Max says is for “Geeks.” She says they’re hiring and she wants to ask Leo if she can go apply. Max tries to stop Leo but is unsuccessful, with Leo giving his approval for her to go apply.

That night, Alisha comes over to Max’s house and tells him the interview went well. She says all that’s left for them to do is check her references, which she explains means they’re going to call the arcade to ask about her performance. Max’s eyebrows raise as Judy comes in, offering Alisha a celebratory sundae. She had to go tell her parents and after she leaves, Judy also tells Max he should tell Alisha he likes her. He says he has another plan, revealing that he’s scared that Alisha won’t like him back.

In his arcade uniform, Max goes to the Exploration Emporium and meets the owner, Darwin, who puts a bracelet on his hand that he tells him will change color if he lies. Forgetting about it, Max introduces himself as a mall neighbor from the arcade. “Hayley’s comet, I just interviewed a girl from there yesterday,” the manager says. Max suggests that he save himself a call and just ask him about Alisha, with Max telling him that she’s always late to work and unfriendly towards customers.

That night, Max is playing in his backyard when Alisha comes over upset. Darwin told about his conversation with Max. “Why would you say that Max?,” she asks. “The truth is I like you,” Max says before panicking and adding “As a friend.” He tells Alisha that he was worried that if she wasn’t working at the arcade, they wouldn’t hang out anymore. She tells him she got the job because Darwin saw Max’s bracelet change color, adding that she must be great if he didn’t want her to leave the arcade so much. She tells Max they can still hang out even though they won’t be working together anymore.

Sydney to the Max will return on April 23rd with another new episode called “My Own First Enemies.” Here’s the official episode description:

Sydney struggles with navigating the pitfalls of social media when she posts her music online and receives negative comments. Back in the ’90s, Instant Messenger has just hit the internet, and young Max decides this is the perfect way to tell Alisha he “likes-likes” her.