Author Jennifer Brody, under the pen name Vera Strange, is on fire with her Disney Chills series.

Book one in the series, Part of Your Nightmare¸ was released less than a year ago, and yet the first four books have already been published as of the date of this article. Safe to say, these books are coming in hot (in more ways than one)!

If you are not yet familiar with the series, Disney Chills is Disney’s answer to Goosebumps. It is a middle-grade horror anthology series premised on all-new protagonists striking deals with famous Disney villains in an attempt to achieve what they most desire. The books see young people face moral lessons on various social issues, including popularity versus true friendship and the price of fitting in. In these contexts, the stories explore whether or not making supernatural deals is the best option (spoiler: it often is not). Each Disney Chills story is geared to end tragically for the hero or heroine with the villains victorious, which is also like Goosebumps.

Fans with a taste for darker Disney stories are encouraged to check out the first four books: Part of Your Nightmare, Fiends on the Other Side, Second Star to the Fright and Be Careful What You Wish Fur in anticipation for book five. However, the stories are not connected to one another, so you can pick and choose which tale tickles your fancy without having to stick to a particular reading order.

Now to the exciting stuff! While Liar, Liar, Head on Fire is not set for release until August 10th, 2021, we are today delighted to share with you the exclusive cover reveal (you are seeing it here first, folks!): 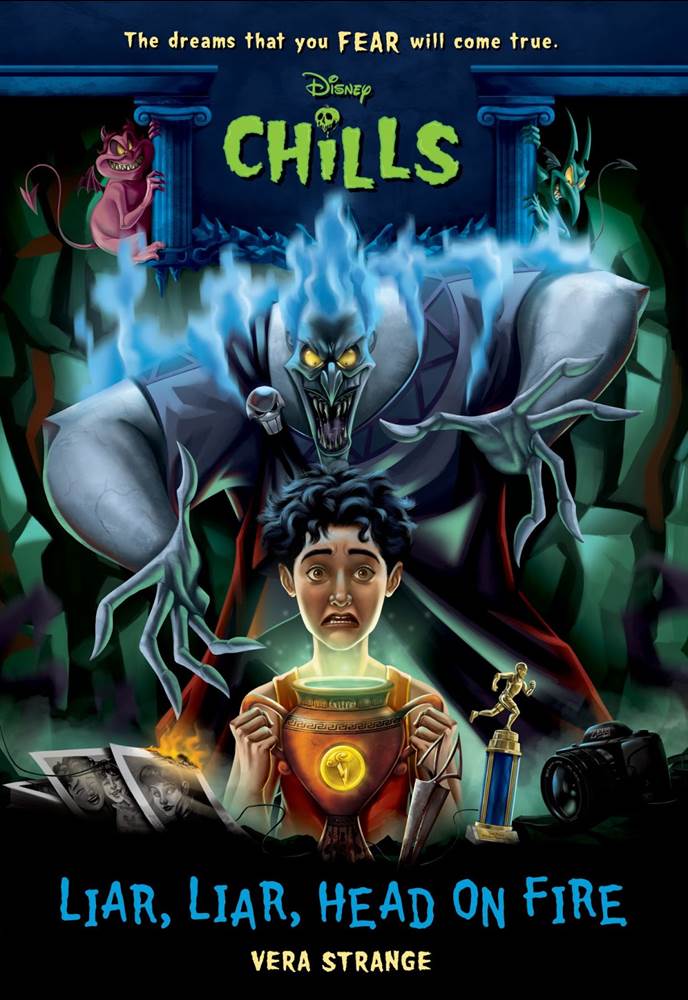 We are loving the rich imagery consistent with the other book covers in the series. Each cover also brings with it its own unique flavor, making us even more excited to get our hands on a copy and dive right in.

… Want to do a partial dive into the story right now?

In his beat-up cherry red pickup truck, Phil drove through the center of Mt. Olympus, a quaint town square filled with local shops and governed by that one stoplight.

Hector cringed at that reminder of his future. It wasn’t just that he had to get through the race in two weeks. If he did well, he knew that wouldn’t be the end of it. His parents would want him to keep training in the hopes of getting a track scholarship to college, just like Phil was doing. The more successful he was in these races, the more hopes would be pinned on his promising athletic career. It was like a double-edged sword.

If he failed, then he let his whole family down. But if he succeeded—if he won the race and captured the Zeus Cup—then it would never stop. But what choice did he have?

Oblivious to his angst, Phil cracked up the radio, bobbing his head to the upbeat rock song. Hector glanced at him.

Phil looked like an older version of Hector. He still had a boyish face, but he was taller, with long, awkward limbs and a curly mop of hair that was shaved close on the sides. It seemed to be all the rage these days on social media, but Hector just thought it looked silly.

“Your haircut makes you look ridiculous,” Hector blurted out with a giggle. “You look kind of like a celery stalk. Tall and narrow with curly leaves on top.”

“Hey, dude, I look super-rad,” Phil shot back, running his hands through his hair and primping in the rearview mirror. Hector snorted out another laugh at his brother’s antics.

“Yeah, like a rad celery stalk,” he quipped. “Not sure vegetables are ever cool, though.”

Phil winked at his reflection. “Whatever. You’re just jealous of my sick style.”

Hector cracked a smile, then turned his gaze back to the window, watching the storefronts flash by as they drove through the familiar downtown.

Mt. Olympus often felt like a piece of history, perfectly preserved and untouched by modern conveniences and the passage of time, almost like a relic of some ancient era that had long since passed into memory, like their history lessons. While that made it a safe place to grow up, it also meant little ever happened there.

Safe meant boring, at least in Hector’s opinion. The race was the town’s one claim to fame, and the source of all the excitement around these parts. Cuz it’s not like there’s something else to get excited about, Hector thought glumly.

They didn’t have a major sports team or even a concert venue. You had to drive two towns over to see the newest movie releases at the multiplex and even further for concerts.

Mt. Olympus had the Spartan race.

And that was it.

The thought made Hector’s smile fade, and he couldn’t help thinking about the grueling torture session Phil had planned for him at the field. He sometimes hated how he could go from fine to annoyed or sad like someone had flipped a switch. His mom said he was moody, and his moodiness had seemed to intensify when he turned twelve. His assumed it was because he was a tween now, and it came with the territory, but Hector knew it was something else. It was the race, and the fact that turning twelve meant this was his year to qualify. It was too much pressure, but he couldn’t tell them that.

His eyes landed on their family’s store. They had the prime spot in the center of town.

“Hero’s Sporting Goods—Official Sporting Goods Supplier of the Mt. Olympus Spartan Run since 1917,” read the sign printed on the red awning. The business had belonged to his mom’s side of the family, but when she married his father, they’d taken over the day-to-day running of the place. They carried everything anyone could ever want in sports.

The only thing missing from the store was . . .

Through the large storefront windows, which were always glistening and spotless (Hector had scrubbed them many times under his mom’s careful watch), he saw the empty glass trophy case, prominently placed front and center. This is where the Zeus Cup was supposed to be displayed. His grandparents had it built years ago, hoping someone in their family would one day bring the Cup home.

Unfortunately, it had remained empty ever since.

Hector knew that winning the Cup and displaying it proudly in the front window would bring glory to the family and bump up business for their store, too. He felt the added pressure building inside him like a valve that needed to be released. He did want to win it—not for himself, but for his family. They loved him and took care of him, putting a roof over his head and food on his table.

But he didn’t feel worthy.

Inside, he felt weak and afraid.

Mom stepped outside to sweep the front steps as they drove past. She waved at them, grinning at Hector.

“Good luck training!” she called out in her singsong voice. Her long, dark braid swung around her neck. “Break a leg . . . or actually . . . don’t break it. But you know what I mean,” she said with a wink. Her eyes still sparkled with youthful energy, despite her age.

“Thanks, Mom!” Hector shouted back through the window.

He sat back again and tried to focus on the positive. Like last night, Juan and Luca had slipped him candy bars after dinner, knowing he would be famished from practicing so hard, breaking their parents’ no candy during the week rule. Apparently, they’d snuck into the pantry and swiped them from the top shelf where Dad hid his stash, unbeknownst to Mom, who was always on him to eat healthier. Dad had a serious sweet tooth.

Their truck curved around the central town square, which had large marble statues of famous Greek gods, an homage to the town’s founders. The town had been settled by Greek immigrants, who had been big on celebrating their history and culture.

Under the leafy trees and scattered among the benches where people lounged and snacked and played with their kids, stood the statues—Zeus, Hera, the Fates, the Muses, Pegasus, Hercules, and of course Hades in the middle of it all. He was the God of the Underworld.

Hector shuddered picturing the god, who ruled over the souls doomed to the River Styx. He’d loved their father’s lesson on Greek mythology, partially because it related to their town. He knew the names of all the gods by heart and what they controlled. The Hades statue stood a little bit taller than the others—and he looked creepier, too. It was befitting of his role.

Hector’s eyes locked onto the statue of Hades. The god had spiky, needlelike teeth, a wicked grin, and wore long robes. Flames took the place of his hair, curling upward into a peak.

Suddenly—for a split second—the hair flashed with blue flames. The statue’s eyes lit up yellow and locked onto Hector.

They bored into him.

Hector flinched back in shock and grabbed his brother’s arm. Phil jerked the steering wheel in surprise and before Hector could blink, the car veered off the side of the road with a deafening squeal of the tires.

Liar, Liar, Head on Fire is set for release on August 10th, 2021 but can be pre-ordered today at this link.