Did you know it’s harder to get to sleep when you’re using screens like a phone, tablet or TV? It’s because of the blue light they emit, which prevents your brain from making melatonin, the hormone that makes you sleepy. Raven knows all about it in the newest episode of Raven’s Home that premiered April 23rd on Disney Channel titled “The Slumber Years.” Here’s a recap of this brand-new episode. 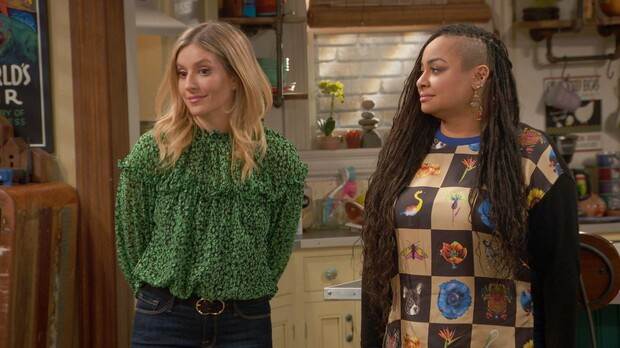 It’s nighttime in Raven’s apartment and Levi is wearing his old cow pajamas, which don’t fit him well anymore. Nia asks why he’s wearing them and he tells her they’re good luck, but doesn’t say why he needs them. Bending over, they rip and he runs back to the bedroom as Booker comes out, having finished brushing his teeth for bed. Raven announces that it’s bedtime, going through her normal routine, telling the kids to go to their rooms and Tess to go home. Nia tells Raven that Tess hasn’t been over all week.

Booker argues that since he and Nia are 15 now, they should get a later bedtime, asking it to be pushed to 9:00. “Think of it like this: It’s 9:00 somewhere,” Raven jokes before reminding them “No screens for sleeping teens.” Chelsea is impressed by how fast Levi is, who was already in his room when Raven told them to go and then appeared behind her in different pajamas that fit better. With the kids gone, Raven and Chelsea are trying to keep it down, both up to something.

In their room, Booker sees on his phone that the time traveling vampire show he and Levi likes, “Fang Times,” is leaving FlixWeb at midnight. Raven comes in to check on them and they pretend to be asleep, but she knows Booker was on his phone and takes it. He agrees with her, but as soon as she exits, he pulls out his tablet. “Clearly you learned your lesson,” Levi sarcastically says as Booker invites Levi to join him in watching as many episodes as possible before midnight. Levi says no.

Nia is in her room reading a book when Raven comes in to check on her. Nia’s phone dings and she tells Raven it’s just a notification that she gets anytime Tess posts something on social media, which is usually about Ramon. Nia brings up Wyatt and Raven refuses to call him her boyfriend. After Raven leaves, Nia gets a text from Wyatt who reminds her that tomorrow is their 1-month anniversary and he wants her to stay up until midnight with him to celebrate. She resists at first, but soon gives in and decides to look for a place to hide where she can call him and not get in trouble with Raven.

In the living room, Raven uses codes like “The eagle has nested” and Chelsea doesn’t understand, but pulls out a can of oatmeal. “It’s time to indulge in the one parental joy we have left,” Raven says as they sit on the couch. Raven questions why there’s oatmeal in the can and Chelsea says it’s to hide the smell of chocolate, thinking the kids would be able to smell it without the oats inside.

Watching “Fang Times” under his covers, Booker keeps talking back to the show and Levi can’t sleep. Booker asks him to join him again and Levi says they’ve already seen every episode. Booker argues that they’re older now and parts of the show will make more sense to them. Levi says he has a test tomorrow and he needs to sleep, but Booker has a vision of Levi saying “Thanks, Booker, that show actually saved me.” Booker tells Levi about the vision and Levi questions if it was real, but agrees to watch one episode. Booker sneaks off to the kitchen to grab some snacks.

Raven and Chelsea are on the couch eating their chocolate, talking about how if the kids knew about it, they would eat it all. Booker sneaks up behind them and asks “Whatcha doing?” They each grab a book and pretend to be reading, Chelsea’s book is upside down and Raven is reading a 6th grade science        book. Booker questions what they’re doing and they say they were just reading and eating oatmeal. He asks where the milk or water is and Raven lies: “Back in my day, we didn’t have that fancy milk or water stuff.” Raven asks Chelsea to show Booker how they eat it raw and she insists Raven do it with her. Shoving their mouths full of dry oats, Booker goes to the kitchen and closes the door. They both spit it out after he leaves, grabbing their candy and taking it to their bedroom.

Nia was hiding in the kitchen and got trapped when Raven and Chelsea moved to the living room. She whispers to Booker, asking if they’re gone, making a comment about how disgusting the chocolate they’re trying to hide is. She tells him she’s trying to call Wyatt for their 1-month anniversary and he suggests she go to the roof. He admits that he’s trying to get Levi sugared up so he’ll stay up late watching their favorite show.

Up on the roof, Nia finds Tess in her pajamas who notices that Nia looks a little scared. “It’s the middle of the night, there’s nothing but bats and rats up here,” Tess tells her. They’re both up there for the same reasons, to talk to their boyfriends without their moms hearing. But when they hear Ravena and Chelsea coming, they hide behind chairs. Raven and Chelsea hid more of their chocolate on the roof under a potted plant, grabbing it and going back to the apartment. Alone again, Nia and Tess reminisce about the last time they were up this late together, which was during a sleepover. Tess gets a call from Ramon and goes to another part of the roof to talk to him.

Booker and Levi are chowing down on their snacks as they talk about the show. Levi yawns and is shocked at how late it is, having unintentionally watched seven episodes. He realizes that Booker sugared him up so he would stay up and gets upset. Booker says he just wanted to hang out because Levi is always busy studying now. Levi confesses that he feels left behind because he’s a year younger than Booker and the reason he was studying was for an advanced history test that would put him in Booker’s 9th grade class. He kept it from Booker because he didn’t want to get his hopes up. Climbing into bed, Booker pulls the covers over Levi, hoping they can both be in the same class together if Levi passes his test.

On the couch eating their dark chocolate, Chelsea asks Raven if she’s the only one who saw Nia and Tess on the roof. “Are you gonna go back there, Ray? Is Nia ‘Gonna get it?’” Raven decides not to intervene and Chelsea brings up one of her favorite memories from their teenage years, a time when they stayed up late at a camp after making up from a fight. “Nia’s getting a little too old to get it,” Raven tells Chelsea. “But Booker, on the other hand…”

Nia and Tess both end up off the phone at the same time, with Ramon and Wyatt both almost getting caught by their parents. Nia starts to talk when he phone rings. They both ignore their calls to tell each other that they feel like they need to hang out more. They commit to having a weekly boyfriend-free roof hang out going forward, with Tess saying “Besties before boyfriend time.”

The next afternoon, Booker is at home pacing, anxious to find out how Levi’s test went. Raven tells Booker that she knows he kept Levi up watching their show. “I’m gonna get it,” Booker says, with Raven saying she's going to retire that phrase. Nia and Tess walk in and Raven says she knows they were on the roof last night. Then Levi enters, having passed the test. Booker is excited when Levi tells him “A lot of the test questions were straight from the episodes we watched, so thanks Booker, that show actually saved me.” It’s one of the few times Booker’s vision has gone exactly the way he planned. They decide to watch a different show tonight.

That night, Raven and Chelsea decide to let the kids in on their chocolate secret, revealing their stash of dark chocolate and giving each of them one. They put it in their mouths and Booker is the first to give feedback, repeating the word “No” and looking for a place to spit it out. “Why would they make this?,” Levi asks. “Why would anyone make this?” Nia hates it, too, and the kids go off to bed. Alone again, Raven turns to Chelsea with a smile and says “Bring out the real chocolate, Chelse.” They pull out a different bag of better chocolate and sit on the couch in peace, knowing the kids won’t come looking for it.

Raven’s Home will return on April 30th with a new episode called “Bless This Tess.” Here’s the official description from Disney Channel.

When Raven tells the kids that Tess can’t keep coming and going during quarantine, Booker, Nia and Levi suggest Tess temporarily move in.