Touchstone and Beyond: A History of Disney’s “Medicine Man”

Sean Connery has found the cure for the plague of the 20th Century, but he lost it. That is the premise for this week’s film from 1992, Medicine Man. With the Amazon rainforest as his backdrop and the assistance of Lorraine Bracco, will the magical cure for cancer be found before the encroachment of progress into the rainforest? 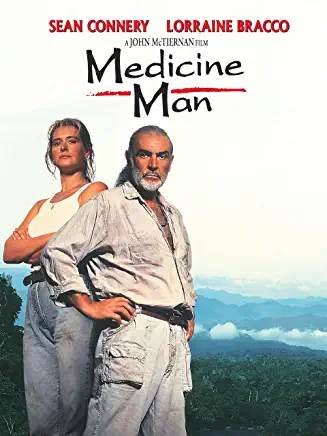 Dr. Robert Campbell (Sean Connery) is a reclusive scientist deep in the Amazon. After years of isolation, he communicates with the company that supports his work for machinery and a research assistant. In comes Dr. Rae Crane (Lorraine Bracco). She is there to observe Campbell and to evaluate whether the company should continue to fund his work.

Campbell sees Crane as an outsider that will compromise his work. Reluctant at first, Campbell realizes that he needs Crane on his side, so the secret of his work is revealed. Campbell has found the cure for cancer, but he is unable to duplicate the serum he created.

Skeptical at first, Crane reads Campbell’s work and conducts an experiment on a guinea pig. After monitoring the animal who had cancer, and after administering a dose of his usable serum the animal recovers with no signs of the deadly disease, Crane is a believer and agrees to work with Campbell for a week trying to duplicate his work.

The more time they spend together the icy relationship between the two begins to melt. Campbell knows which flower he derived the serum from, but there is some missing element that completes the serum. Only growing at high altitudes in the local trees, a threat that is far more dangerous than a lack of funding is on the horizon. A road development through the Amazon causes Crane and Campbell to intensify their efforts, which leads to a conflict with government authorities. Just as the two scientists solve the mystery, their forced removal cause Campbell, Crane, and the local aboriginal group to flee further into the jungle, hoping to find the mysterious plant.

I like the fact that Medicine Man is a new take on Joseph Campbell’s Heart of Darkness. Francis Ford Coppola’s Apocalypse Now brought the classic tale into the Vietnam War with all the violence and lunacy of the main characters to the modern world. Medicine Man comes from the same mold as the other two works. Unlike Heart of Darkness where the main character Kurtz is a murderous monster, our ‘Kurtz’ Robert Campbell is a noble figure.

The stories parallel each other from the moment the opening credits. Lorraine Bracco’s character is our Marlow. She has been sent to evaluate Campbell and to decide if he should be shut down. Much like the written work and the latter Vietnam War film, Crane falls under Campbell’s spell and agrees to work with him.

For a film starring Sean Connery in the 1990’s, to have the villain be a nameless source of modern progress is a risky move. The destruction of the Amazon rainforest and the impact this has caused has been a growing concern for the last four decades. To have the loggers and the road builders turned into a nameless body that inhabits the force of world progress was a good choice rather than establishing one villainous character. The fact that someone who could be on the cusp of curing cancer is forced out of the area for the sake of a road is a truthful possibility.

Lorraine Bracco is a gifted performer, but she spends most of her time on screen either in a hysterical state or unnecessarily loud as she reacts to Campbell’s moods. Sean Connery spends much of his screen time looking annoyed.

Ending the film with a burgeoning romance between Campbell and Crane was silly. The film would have had a more powerful and meaningful ending if Crane had chosen her path because of a respect she had for Campbell and his work, and not because she fell in love with him.

The attempt to tell a new version of Heart of Darkness is admirable but the result in Medicine Man is not a must see. If this film were made today, I suspect the direction of the film and the characters would be very different and might make a more memorable story.

Medicine Man isn’t a bad film, it’s just not that entertaining. The film gets a 1 ½ Golden Popcorn Bucket rating.

Next week in honor of Mother’s Day we look back at Steve Martin’s hilarious return to the role of George Banks in Father of the Bride II.