It’s time to quarantine on Raven’s Home with the newest episode of the Disney Channel sitcom, “Bless This Tess.” Even though the series has incorporated the pandemic in different ways, such as the holiday episode where Raven had a big order to make face masks or episodes showing the kids at school with extras in face masks, this is the first time they’ve featured the whole family stuck in the apartment together. Here’s a recap of this new episode. 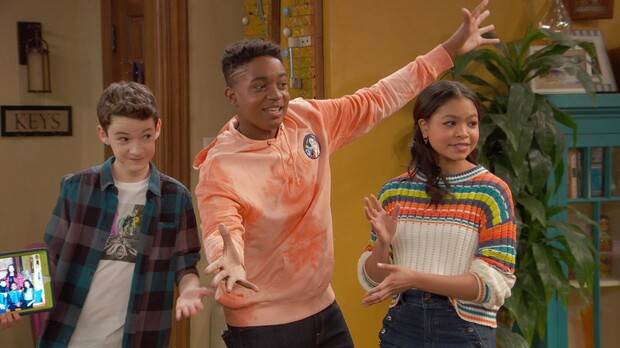 Tess is teaching Nia, Booker and Levi a new dance that’s taking over the internet, with Booker getting it wrong and Nia doing it right. Raven and Chelsea watch from the kitchen, with Raven asking the kids why they feel the need to document every moment of their lives. Booker asks her why she has so many photo albums of them and she gets emotional, going down the hallway to look through them.

Since they haven’t made a music video in a while, Nia is really excited to make one. Tess leaves and Raven calls the kids into a huddle, telling them that because Tess’ parents are working outside the apartment in essential fields, she thinks it’s too risky to have Tess over. It turns out that Raven hasn’t worked for Scoot in a while because of it and Nia is upset that she has to quarantine from her best friend.

With everyone home all day, Raven is having a hard time finding some peace and quiet. When she finds the living room empty, she’s excited to read her book, “No Tea, No Persuade” by S. Smith, but Chelsea comes in bored and keeps distracting Raven.

In Nia’s room, Booker and Levi help her come up with a way to break the news to Tess. Ultimately, Nia decides that Booker should tell him, but he has a vision of Tess saying “Moving in with you guys has been amazing.” He turns to Nia and tells her they don’t have to tell Tess anything.

Intruding on Raven’s reading time, Nia, Booker and Levi walk Raven and Chelsea through a slideshow presentation on a tablet about why Tess should move in with them. Raven agrees that it reduced the risk of exposure and says she’s fine with it if Tess’ parents are. Tess comes over randomly and finds out that she wasn’t allowed to come over but that now she’s allowed to move in at the same time. It’s all settled and Tess will stay in Nia’s room.

The next morning, Raven and Chelsea are afraid to enter the living room because the kids have been slacking on their chores and they think it will be a mess. Not only do they find the living room spotless, but the floors have been waxed and the table is set. Tess got up early and also made breakfast for everyone, pancakes, waffles and french toast. It’s part of her regular morning routine where she gets up at 6:00 am and works out, then does chores and makes breakfast for her parents. Raven makes a joke that when Tess’ parents are ready, she’s going to send Booker and Nia back and keep Tess.

Out in the hallway, Raven is looking for a new place to read when Chelsea finds her, having just gone to get the mail. Chelsea wants to join Raven wherever she’s going, but Raven tells her Levi needs her. Chelsea says she’ll be right back after helping Levi, mentioning how nice it is that Raven doesn’t work for Scoot anymore, which gives Raven an idea. She goes to the parking garage and sits in her car to read.

With Tess out of the living room, Booker shows Nia how fluffy the towels are and tells her that Tess is unraveling his list of reasons not to do chores. He gets a text from Raven asking him to clean the windows and tells Nia it’s pointless to clean the inside if you can’t also wash the outside. Just then, Tess comes down on a window washing rig, cleaning the outside of the apartment windows.

Chelsea finds Raven in the car and asks her where she’s going, figuring out that Raven is avoiding her. Raven says she has “Quarantine claustrophobia” and needs some time alone. Chelsea is offended.

Gathering in Nia’s room, Booker and Levi tell her that having Tess live with them isn’t working out because she’s showing them up. Nia agrees and they decide to tell Tess that she has to go, exiting the room as Tess slides out from under Nia’s bed where she was dusting, looking heartbroken. She goes to the living room to tell them that she heard everything. Nia apologizes, saying she misses neighbor Tess and that now she seems more interested in cleaning and trying to impress the moms. Tess explains that this is her normal routine and she comes from a family of hard workers, with her mother being a nurse and her dad a truck driver. “Things have been super stressful and living with you has been amazing,” she says, fulfilling Booker’s Vision. “At least it was.”

Tess opens the apartment door to exit just as Raven comes in, grabbing Tess and telling her all about the book she finally finished. Discovering that Nia, Booker and Levi asked Tess to leave, Raven stops it from happening, having promised her parents she would live with them for two weeks. Sending Tess back to Nia’s room, Raven tells Nia, Booker and Levi that they need to fix the situation with Tess.

Back in the garage, Raven finds that Chelsea has transformed her car into a spa, getting her audiobooks of the rest of the series she was reading and providing her with mocktails and a basket of muffins. She tells Raven she understands that she needs alone time and is very grateful that she took her and Levi in years ago, saving them. Chelsea starts to exit the car, but Raven asks her to stay and enjoy their secret spa.

In the living room, Nia, Booker and Levi set up their phone on a tripod and call for Tess, eventually luring her out with the promise of sandwiches, which they don’t actually have. Once she’s out, Nia explains that she thought having Tess live with them would be like having a sister, calling her an inspiration for what she does for her family and telling her they learned the dance, tagging it “Essential Tess Day.” As they finish their performance, they fire confetti all over the living room and Tess forgies them, asking to do the dance again with her included.

Raven and Chelsea walk in to find the kids dancing and join in with their own improvised dance. Raven sees the confetti on the ground and tells the kids to clean it up, with Tess volunteering to do it. Nia says she will do it and Tess says they are like sisters. Later, Nia is sweeping the living room while Raven and Chelsea sit on the couch. Raven asks where the boys are and the last thing we see is Booker and Levi sitting in Raven’s car/spa listening to her audio books.

With his bar mitzvah approaching, Levi realizes he didn’t take full advantage of being a kid. Booker encourages Levi to enjoy his childhood to the fullest before becoming a man.