Disney Channel touched on a very important topic with the April 30th episode of Sydney to the Max, titled “The Hair Switch Project.” Between these two stories, we learn how Sydney started straightening her hair while also seeing her mother at the same age feeling equally conflicted. For this week’s recap, I’m presenting Max’s story first because it makes more sense to learn more about Alisha before reading about Sydney. 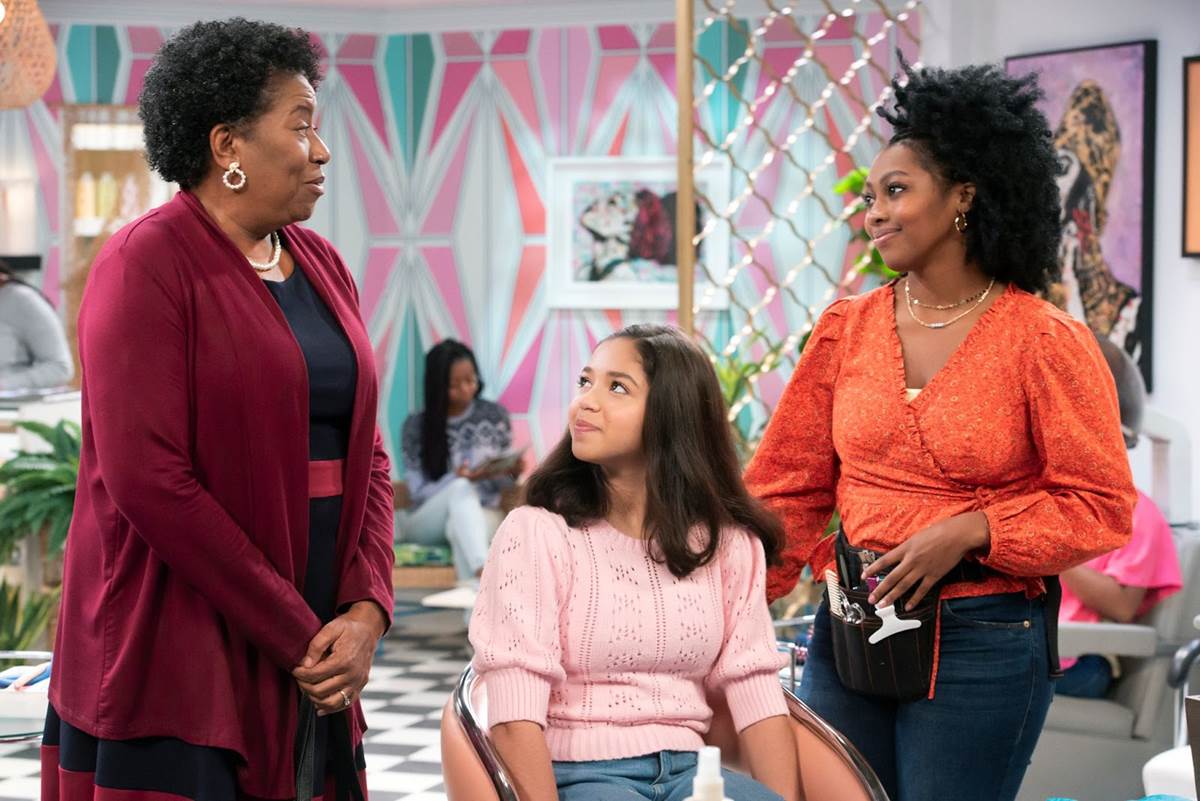 Alisha sneaks up on Max in the hallways and Max tells her that picture day is in two days. She gets upset, saying that if her mother finds out, she’ll make her get a “Relaxer.” It’s a chemical treatment that will straighten her hair and she says it’s like having your hair dipped in a volcano.

Later, Alisha comes to Max’s house upset because her mom got the letter about picture day and made her a hair appointment. She tells Max that she likes her hair the way it is and in the future when she looks back on her school pictures, they won’t reflect the real her. She asks Max if she can hide at his house until the appointment is over so she misses it. But when the phone rings, Judy walks through the living room and answers it, telling Alisha’s mom Maya that her daughter is there.

While waiting for Maya to pick her up, Alisha uses her compact to take one last look at her natural curls. Max tells her that he thinks she’s pretty no matter what and Judy notices that Alisha is upset. Max’s mom suggests that Alisha tell her mom how she feels, but she doesn’t think she will listen. When Maya arrives to pick her up, Max tries to be brave and tell Alisha’s mom that she doesn’t want her hair straightened, but he gets intimidated. “Thanks for trying,” Alisha tells him as she leaves with her mom.

Maya takes Alisha to a salon run by her friend Nina, who just had a baby. Nina steps away to get the relaxer and Maya sees that Alisha looks sad, asking her what’s wrong. Alisha says nothing, but as Nina is about to start the process, Alisha asks her to stop. She asks why straight hair is more beautiful than curly, asking specifically if they do it to fit in with white people. Nina steps away as Maya, a lawyer, explains that as the only Black woman at her firm, she needs to look professional. “I don’t ever want your hair to hold you back from success,” Maya tells Alisha. When Alisha tells her mother that relaxers make her feel like she’s losing a piece of her, Maya apologizes, telling her to pick whatever hairstyle she wants. Alisha says she has an idea and in the end, we see her with braids that lead to a wavy ponytail.

Sydney and her lab partner Jada are working on a project at Max’s smoothie shop, but Sydney was late because she was straightening her hair. Jada tells her that she gave up on straightening her hair a while ago, asking Sydney if she’s ever tried to not flatten her hair. Sydney realizes that she’s never even considered it before, feeling the sudden urge to look at her reflection and taking off for the bathroom.

Later, Max finds Sydney on the couch looking at old photo albums. She asks him when she started straightening her hair and he calls Judy in for help. After Judy points out a few photos of Sydney with curly hair, she notices that all of them were taken with her mom. Judy tells her that after her mom passed away and she stepped in to help raise her, she began taking Sydney to her salon, which was where her hair was flat ironed for the first time and Sydney asked to buy one then.

Later that night, Sydney is in her bedroom playing with her hair when Emmy comes in, asking what the emergency is. Sydney tells her that she doesn’t know how to style curly hair and she’s already looked through online tutorials, but doesn’t know what number she is on a chart of hair types. Sydney tells her friend that she wishes her mom was there because she would know what to do. She gets the idea to call her grandma Maya, leaving her a voice message. In the end, she decides to just straighten her hair for the school photo since she can’t figure it out.

The next day, Max ran out to a beauty school and bought three mannequin heads of different types of Black hair and a variety of hair products. Judy tells him that she asked a Black sorority sister named Monica who is going to send over hair care products that might help Sydney, too. Sydney is impressed by their attempts, but doesn’t know how to use any of the products. She’s surprised when the doorbell rings and in walks her Grandma Maya, who decided to take a few days off work as a judge in Washington D.C. “This discussion is way too important not to have in person,” Maya tells her granddaughter when Sydney asks why she didn’t just call her.

Up in Sydney’s newly redesigned room, Maya tells Sydney that she likes it as Sydney tells her about Jada and wanting to try having her natural hair. Maya tells Sydney that when her mom was alive, she had her hair in braids, pigtails and puff balls whenever she would visit her in D.C. with her mother. Maya believes that when Alisha died, Sydney wanted to fit in with the world around her and didn’t want to look different. Maya encourages Sydney to be proud of her Black side and Sydney says she wants to get in touch with it. “Our hair is our identity, self expression and liberation, so you treat that hair like it’s your crown, embrace it,” Maya tells Sydney, revealing that she already made her a hair appointment and it starts soon.

Entering Nina’s old salon, Sydney meets Kelly, Nina’s child. Sydney tells her about her confusion finding her hair number and Kelly tells her that’s normal for biracial women, examining Sydney’s hair and saying she’s both a 2a and 2b, just like Kamala Harris. Kelly tells Sydney that she has a lot of options for how she wants to express herself with her hair and Maya reminds her that whatever she chooses isn’t her forever hair. Sydney tells them she has an idea.

Back at home, Judy returns from a barbeque at Monica’s, bringing back a plate full of food. Maya and Sydney return and Sydney is wearing her hair in breads that lead to a wavy ponytail, a similar style to what Alisha chose in Max’s story. Both Max and Judy think she looks great and Max thanks Maya for coming to help. Judy apologizes for not taking Sydney to Alisha’s salon after she died. After telling Sydney that her mother would be proud of her, Maya reveals that it was Alisha who inspired her to keep her hair curly in the workplace. They all go into the kitchen to share Judy’s barbeque leftovers.

At the end of the episode, Sydney and Jada are in her bedroom working on their project again. Max comes in with a box full of new hair products for Sydney to try and it turns out they’re the same ones that Jada uses.

Sydney to the Max will return with a new episode on Friday, May 7th, called “The Bat Mitzvah Planner.” Here’s the episode description from Disney Channel:

When a storm ruins Olive’s dream bat mitzvah celebration, Sydney helps her figure out a backup plan. In the ’90s, it’s Leo’s birthday, and all he wants is to win a radio contest for passes to meet their favorite rapper, MC Gavel.