4K Review: “Speed” Has All the Heart-Pounding You Remember, Starring Keanu Reeves and Sandra Bullock If you were a box office analyst in 1994, odds are you didn’t have a lot of money down on Speed becoming one of the highest grossing films of the year. After all, it had been passed around through several studios, including Disney, before being produced by 20th Century Fox on a modest budget of $30 million. Sandra Bullock was not yet a household name and Keanu Reeves was far from the first choice to headline the film, but against the odds, the film was not only an instant success, but has endured as a classic over 25 years later. Now available in 4K Ultra HD from Buena Vista Home Entertainment, fans can experience Speed in a whole new way.

LAPD Officer Jack Traven (Keanu Reeves) is used to diffusing high stress situations, but nothing could prepare him for his next assignment. When a terrorist blows up a city bus and reveals that he has another one set to go if he doesn’t receive ransom money, Jack chases it down and jumps on board. Revealing to the passengers that the bus can’t slow down under 50 miles per hour or the bomb will detonate, Jack has to work together with Annie Porter (Sandra Bullock) to keep the bus going while he tries to figure something out. But keeping a city bus above 50 miles per hour is going to be a lot harder than it seems.

Fully restored in 4,000 lines of resolution, Speed now looks better than it ever has before in your home theater. All the action, excitement and thrills of this blockbuster movie come alive in a whole new way in the “Ultimate Collector’s Edition” on 4K Ultra HD and Digital 4K. Packed full of all of the previously released extras, this is the only version of Speed you’ll ever need.

The film that gave the world the line “Pop quiz, hotshot” has never looked better. Every heart-pounding moment of Speed looks stunning in your home theater and with every bonus feature carried over from previous releases, this truly is the “Ultimate Collector’s Edition.” Available now wherever movies are sold. 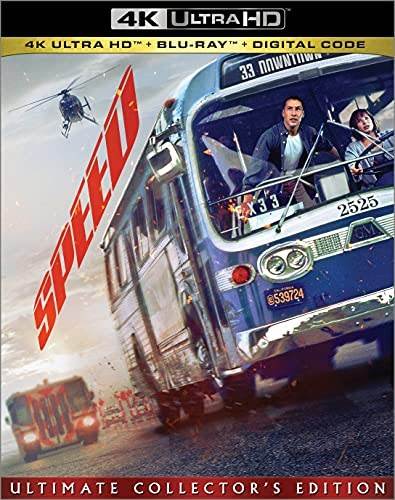