This week’s new episode of Raven’s Home is called “American Torah Story,” which finds Levi getting ready for his bar mitzvah. The Disney Channel sitcom deals with what it means in the Jewish faith to become an adult and the way Levi and Chelsea process that transition. Here’s a detailed recap of this funny new episode. 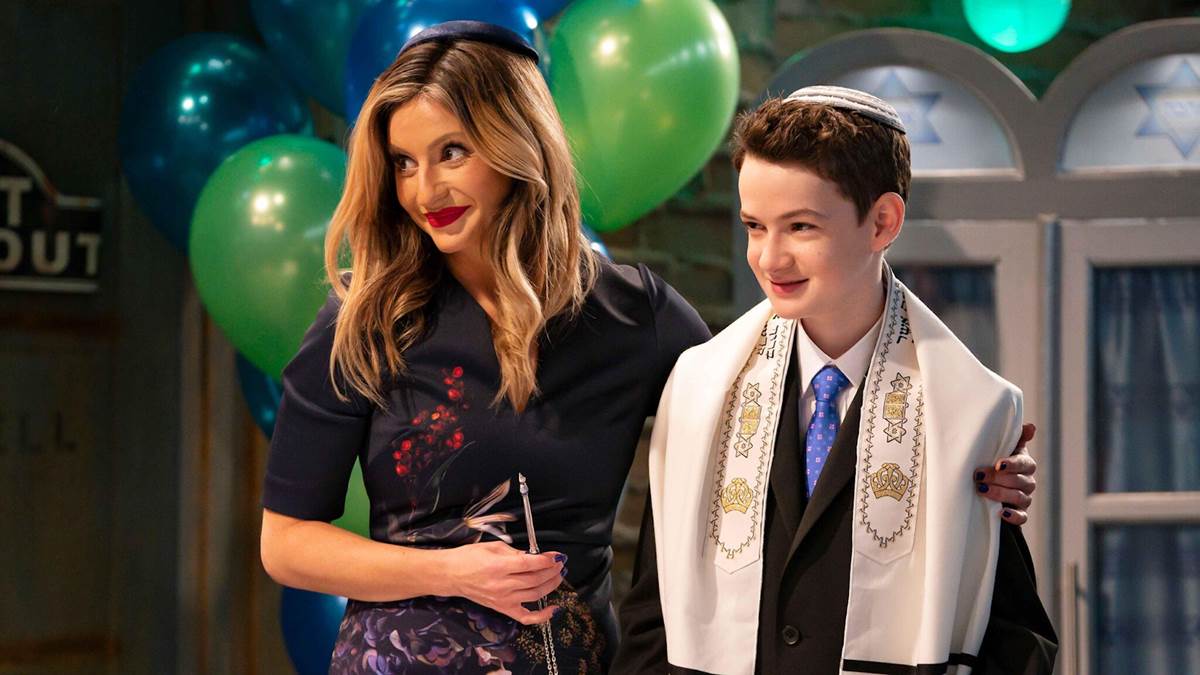 Raven, Booker, Nia and Tess are in the living room when Chelsea comes in, reminding everyone that Levi’s bar mitzvah is this Saturday. They’re returning from his last lesson with their rabbi and Booker makes a joke that Levi’s bar mitzvah is going to be “Litzvah.” Raven starts to get emotional as she realizes that Levi, the youngest kid in the house, is about to grow up. Levi goes to his room to start practicing his Torah reading and write his speech as Chelsea reviews the plans with the rest of the family. It’s going to be a virtual event and they each have a responsibility: Raven is handling the swag, Booker is making a slideshow, Nia is getting flowers, and Tess is learning to dance the horah. When Chelsea’s phone rings, she snaps on someone for asking if she wanted chairs with or without padding for the people who are attending in person.

Booker finds Levi in their room boxing up some of his toys, saying he won’t need them anymore since he’s becoming a man. Booker salvages a few items and starts playing with a yo-yo, with Levi saying with studying, school and meetings with his rabbi, he won’t have time to play. Booker reminds him that he didn’t play much before and Levi says he’s right, starting to feel like he missed out on some of his childhood. He decides he’s going to cram as much playtime as possible into the days leading up to his bar mitzvah.

Raven is working in her studio when Chelsea comes in wearing a power suit and glasses, talking on her earpiece at a bakery and yelling at them for getting her order wrong. When she is put on hold, Raven tells her that she’s not acting like herself. Chelsea says she’s just focused on Levi’s big day and asks Raven about the swag. Her idea is a pop socket and she shows Chelsea the prototype, which says “Levi’s Bar Mitz” due to space limitations. Chelsea scraps that idea as she makes the baker cry on the other end of the phone.

In the apartment, Levi goes wild jumping on the couch. When he knocks a pillow into a plant, he starts to clean it up when Booker stops him, reminding him that a kid would just blame it on someone else. Next, they turn the hallway into a soap suds slip and slide and Nia and Tess are shocked to see it when they come upstairs. Levi acts very childish with them and they threaten to not help with his bar mitzvah if he keeps acting like this. Left alone again, Booker gets a vision of Levi at his bar mitzvah turning standing at the Torah and saying “I can’t do this.” Booker tells him about his vision and says he should go study, but Levi continues his immature antics, pretending to puke silly string. “I may have created a monster,” Booker says to himself.

At the studio, Chelsea has been given three types of chairs to try out, examining them like Goldilocks. But instead of the last one being “Just right,” she says “And this one is just wrong.” Raven reminds her that it’s only going to be the family sitting in the chairs since most people will be viewing it online. She suggests that Chelsea is suppressing her feelings about Levi growing up into party planning and Chelsea gets defensive, saying a bar mitzvah is a once in a lifetime event. Asking about Raven’s new swag ideas, she cycles through pens, socks and mugs before saying “Listen, it’s not about the swag, it’s about Levi.” Chelsea takes another call about meals for the bar mitzvah.

In the kitchen, Nia stops Booker from getting a snack, complaining that Levi has been playing pranks on her and Tess. He gave Tess soap that turned her hands green and put Nia’s phone in a gelatin mold, which she’s having a hard time getting out. She’s worried because Wyatt has been texting her and she can’t text him back.

In the bedroom, Booker finds Levi in bed reading a comic with shark slippers on his feet. Booker asks if the comic is about a bar mitzvah, telling him he should go back to his old self and study. “You’re right. I had my fun but it’s time for me to get serious,” Levi says, suggesting they go to bed and he will study in the morning. But when Booker climbs in bed, he sits on a whoopie cushion and Levi laughs, telling him he’s going to his couch fort to play instead of sleep.

Booker wakes up a short time later with Nia scratching at his door. Levi put glue in her hand sanitizer and her hands are stuck to a hairbrush and slipper. Raven comes in and tells Nia to use nailpolish remover to get the glue off. “What is going on?,” she asks. “Chelsea isn’t Chelsea, Levi isn’t Levi.” She starts to tear up again about Levi growing up and Booker asks why she didn’t cry when he turned 13 and she says it’s because of the ceremony that symbolizes him becoming an adult. Booker tells his mom that he thinks he messed everything up by telling Levi to be a kid again. “It’s time for a grown up to handle it,” Raven tells him as she prepares to go talk to Levi. Booker accidentally sits on the whoopie cushion again and Raven laughs.

Levi is eating string cheese in his pillow fort and watching cartoons when Raven joins him on the floor, telling him he needs to get ready for his bar mitzvah. He tells her he knows the Torah well enough to do his speech and she reminds him that his mom knows the Torah well because she studied hard for her bat mitzvah. She shares that Chelsea never got to actually have her ceremony and Levi says he didn’t know about that, asking her what happened. Raven says he’ll have to ask his mom. As Raven leaves, Chelsea comes in, offering to help Levi clean up his fort. He asks about her bat mitzvah speech and she says it was going to be about giving back to the community and helping people. The reason she didn’t have her bat mitzvah is because she wanted to help with an earthquake cleanup effort instead.

The next morning, Booker wakes up to find Levi sleeping at the desk, speaking Hebrew when Booker wakes him up. Levi now feels like he wasted his week when he should have been working on his speech, saying his brain has turned to mush. Nia and Tess enter and Levi apologizes, begging for their help. As he steps out of the room, a bucket of ping pong balls drop on him, a prank from Nia and Tess. “I deserve that,” he says as they promise no more pranks.

Levi’s bar mitzvah is held on the roof and Booker’s slideshow is mostly photos of Booker with Levi badly photoshopped in. Raven’s swag turns out to be pillows that say “Levi’s Bar Mitzvah” that are on everyone’s chairs. Levi’s dad arrives just in time for the event and the rabbi comes out to start the service. We see Levi reading from the Torah when he pauses, telling everyone that he’s thought a lot about his act of kindness. “I can’t do this,” he says, fulfilling Booker’s vision, but then continuing, “…Without my mom.” He asks Chelsea to join him so she can have her bat mitzvah too. Chelsea starts to cry and says “You’re about to become my young man.” Raven, already crying in the audience, cheers on Chelsea’s tears. “Let it out, mamma, let it out.” The event ends with everyone dancing the horah around the roof, led by Tess, and Levi being lifted on a chair by Booker and his dad.

Raven’s Home returns with another new episode on May 14th called “Say Yes to the Protest.” Here’s the episode description from Disney Channel:

Nia wants to take part in a protest to protect the environment, but first, she has to convince her mom to let her attend. Meanwhile, Raven volunteers to help Levi with his S.T.E.M. project but inadvertently takes over.