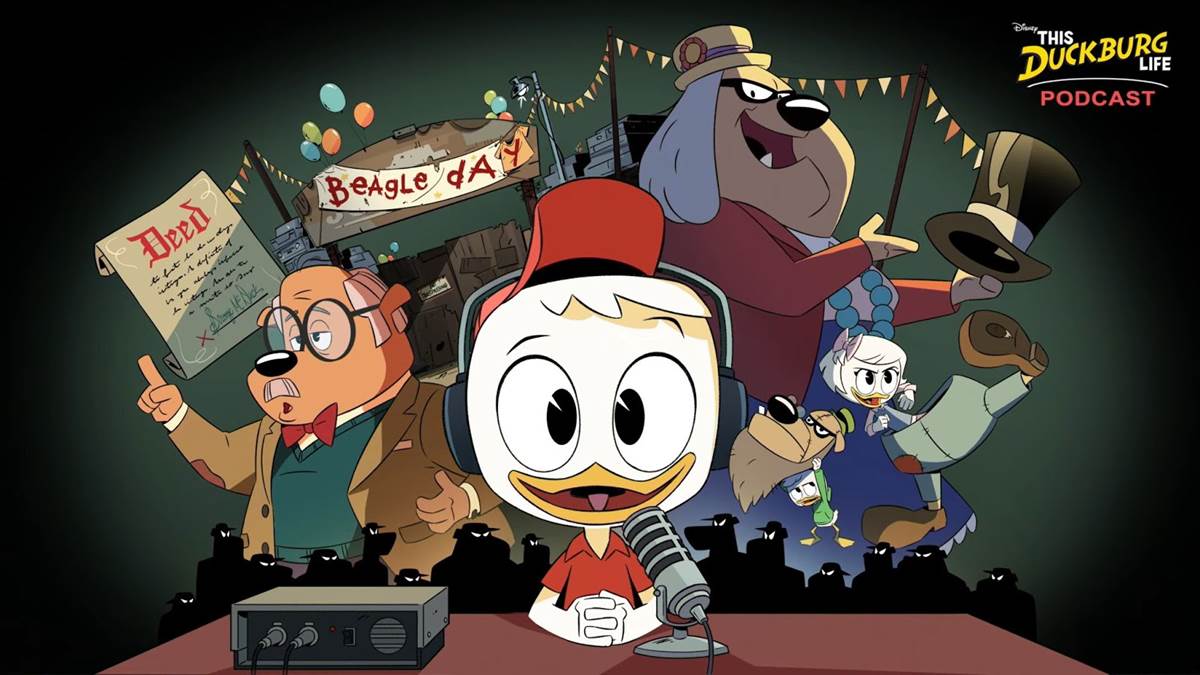 Hello and welcome to the final installment of Laughing Place’s regular recap of the scripted podcast This Duckburg Life, which expands upon the characters and universe established in Disney XD’s recently completed DuckTales reboot.

Episode 7 of This Duckburg Life begins with a montage of interviews with citizens of Duckburg talking about their interactions with the criminal gang known as the Beagle Boys. Host Huey Duck (voiced by Danny Pudi) introduces the premise of the story: “What happens when one of their victims has had enough, and finally takes a stand?” A commercial break has tech guru Mark Beaks (Josh Brener) announcing “the most awesome music festival ever,” namely #FeatherFest– hosted on his private island in Birdmuda. Day passes start at $10,000. Huey brings in his brother Louie Duck (Bobby Moynihan) as a guest on the show to relate how he started a business called Louie’s Leftovers– selling unused items from McDuck Mansion like art and furniture– but was robbed by the Beagle Boys. Webby (Kate Micucci) interrupts, as she wants to use Huey’s equipment to work on her undercover accents.

Louie says the Beagles got away with their uncle Scrooge McDuck’s top hat, “but he probably has a thousand of those.” Webby reacts in shock to this news, telling the brothers that Scrooge keeps the deed to Duckburg stored in his hat. Louie and Webby declare that they’re going to rescue the top hat, but Huey first wants to mic them up and use the audio for his show. “Ah yes, documenting our mission. Very wise,” says Webby in her best Russian accent. We hear another #FeatherFest ad from Mark Beaks, reminding us to book our tickets and listing off a bunch of pop stars who will evidently be performing at the event, “assuming they all say yes to my DMs.” He also tells prospective ticket buyers to “bring your own food and sleeping bag.” Meanwhile back in the studio, Huey welcomes a Beagle Boys expert named Professor Barksley to the show. 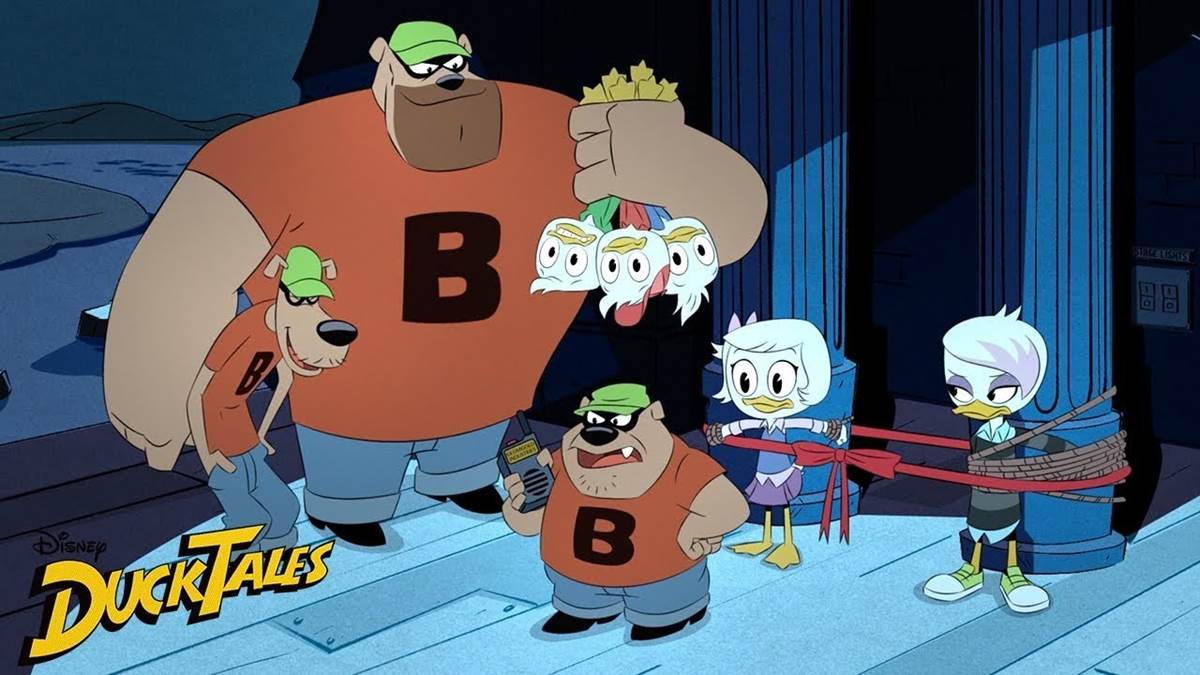 Barksley explains that Webby and Louie “have chosen to infiltrate the Beagles’ junkyard on none other than Beagle Day, a Beagle holiday commemorating the time when the Great-Grandpappy Beagle stole the deed to Duckburg and ruled the city.” Huey remembers that the deed was returned to the citizens of Duckburg by Uncle Scrooge, and we start to hear what Louie and Webby experienced in the junkyard. They hide under a crate and listen to some Beagle Boys argue about popping balloons. “My spy senses are tingling,” says Webby, as she lifts the crate to see what they’re up against. There are carnival games and costumed characters themed to Beagle Day and even a Scrooge McDuck piñata filled with real gold coins for the occasion. Louie wants in on the gold, but Webby insists they focus on finding Scrooge’s top hat.

They get into a Grandpappy Beagle costume with Louie wearing the head and Webby wearing the legs, and they find a “giant creepy statue of Scrooge,” which the professor proceeds to explain. “The Wicker Scrooge– erected specifically for the festival– which they then cover in garbage.” Webby theorizes the Beagles may have made the statue because “deep down in their hearts they actually secretly love Scrooge,” but then one of the Beagles shouts, “Let’s burn him!” “I stand corrected,” admits Webby. Barksley explains that the statue is set on fire as the grand finale to Beagle Day, with the goal being for the smelly fumes to reach Scrooge’s mansion. Louie spots Scrooge’s hat resting atop the garbage sculpture, but before they can climb it, Ma Beagle (Margo Martindale) starts making a speech and encouraging her many Beagle offspring to burn down the statue.

In a third commercial from Mark Beaks, the entrepreneur concedes that #FeatherFest may have been too ambitious, “and the feds charged me with fraud and reckless endangerment.” But that doesn’t stop him from announcing his brand new festival, #PrisonFest, direct from Duckburg Jail– complete with several members of the Beagle Boys gang as performers– for only the $10,000,000 cost of Beaks’s bail. “Cheese sandwiches to be provided.” At the junkyard, Ma Beagle is about to start the fire and burn down the Uncle Scrooge effigy when Webby leaps into action. Louie attempts to help her but is immediately captured by the Beagles. “You gotta put out the fire! The deed to Duckburg is in that hat!” cries Louie. “I’m realizing I probably should not have said that out loud.” Ma Beagle is thrilled at the prospect of finally owning Duckburg again, so she begins to climb up the statue to claim the deed. 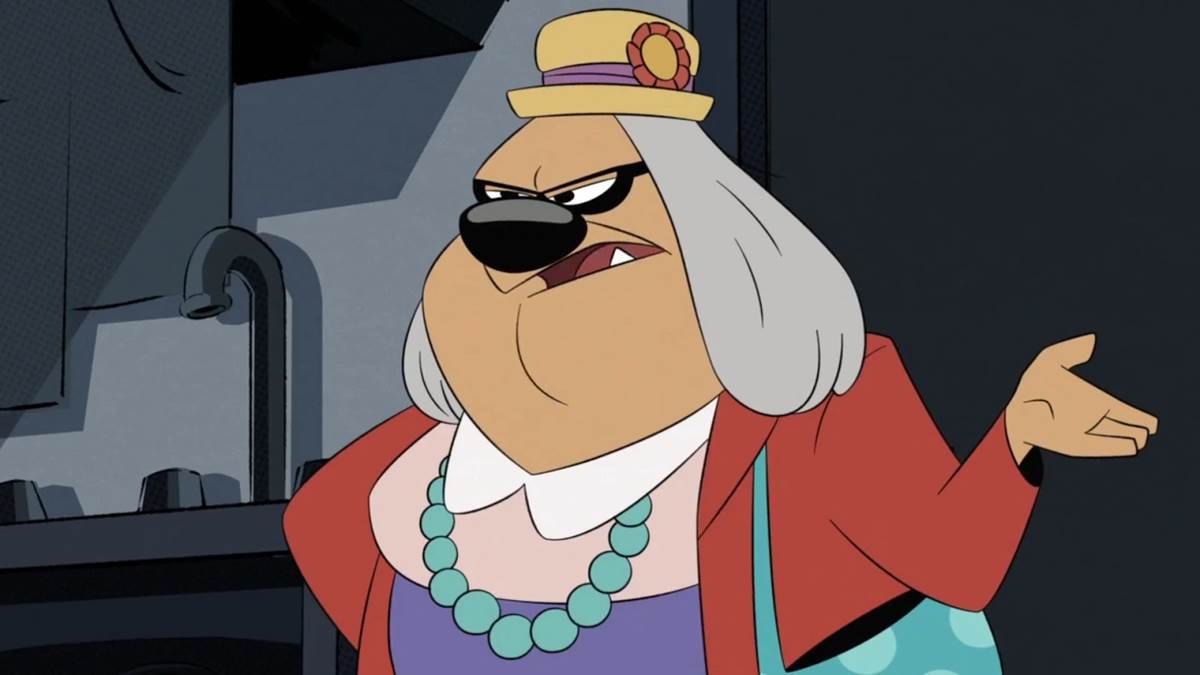 Webby races Ma Beagle to the top of the structure, but it begins to fall apart. Webby gets the hat first, but has trouble getting down from the top of the statue. Louie tries to think of a plan, but is distracted by the Beagle Boys popping balloons. “Wait… those balloons are filled with helium. That’s it!” exclaims Louie. He offers to hold some of the balloons, and then flies away leaving the Beagles behind. Webby is battling Ma Beagle on top of the garbage sculpture when Louie reaches them and grabs Webby’s hand. They fly away on the balloons, hat and all. “Next time you’d better think twice before you steal from Louie Duck! Happy Beagle Day!” In Huey’s studio, Professor Barksley reveals himself to actually be Baxter Beagle, “a spy from the Beagle clan sent to reclaim the deed to Duckburg.” Huey says they gave the deed back to Uncle Scrooge, and it’s now locked away.

“Locked away? But I need to bring something back to Ma!” says Baxter, who then realizes Ma would love starring in a podcast, so he just steals all of Huey’s equipment instead. Then we hear the intro to a new podcast called “This Beagleburg Life,” which will include topics like advice for robbing a bank, the best presents for Ma, and how to make the perfect PB&J sandwich. We hear Webby attack Baxter Beagle, using her Russian accent and undercover spy identity to retrieve the stolen equipment. Huey wraps up the show and introduces his uncle Donald Duck (Tony Anselmo) to read the podcast’s credits one last time. 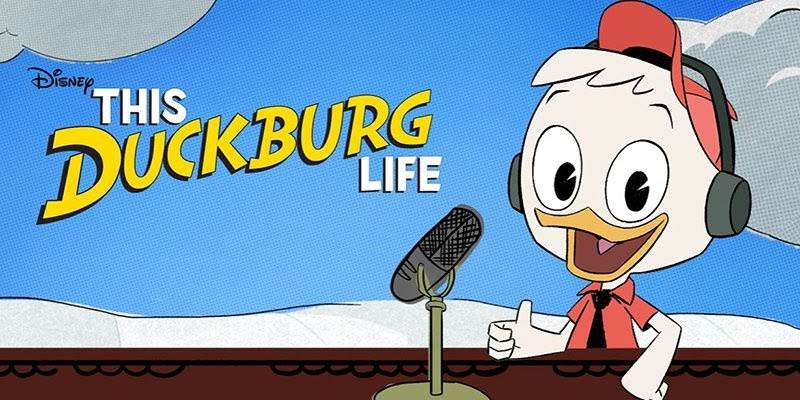