Nia takes a stand for what she believes in on this week’s new episode of Raven’s Home. Titled “Say Yes to the Protest,” Nia tries everything to get her way on the hit Disney Channel sitcom. Here’s a full recap. 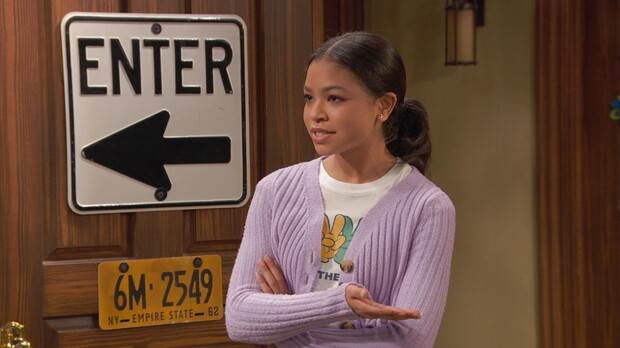 It’s 6:00 am and Nia and Tess are sitting in the living room making signs for a protest. A historic building five miles away is being torn down to make way for a city garbage dump. When Tess tells Nia that she needs a rest, Nia says “Don’t get tired, get inspired,” promising her bestie a donut from Iconic Donuts afterward. Raven comes into the living room asking the girls why they’re up and Nia tells her about the protest they’re doing to. Raven tells Nia she can’t go because it’s a hot topic on the news and things could get out of hand. Nia pushes back, saying she wants change. Raven reaches a hand into the couch and hands her a nickel.

On the roof, Nia is upset that they can’t do anything about the city dump. Tess asks her why it’s such a big deal and Nia tells her that on a hot day, they’ll be smelling garbage wafting from the dump. Nia decides to refine her powers of persuasion before asking her mom again, deciding to try them out on Booker.

Chelsea and Levi enter the living room with a box they picked up from school, which contains materials for a S.T.E.M. project for Levi. Items in the box include a floatation device, a fan blade, a power chord and canvas material. Saven suggests that he use the canvas to sew something together, arguing that sewing could be considered engineering when Levi tells her it’s not S.T.E.M. Raven tells him that she’s magic and he agrees to let her help him with his weekend project.

Nia finds Booker reading in his room as she tries to convince him to want to come to the protest at City Hall with her. He heard their mom say no already and she asks him when the last time she needed him was. He can’t think of a time and agrees to join her.

In the living room, Raven looks over Levi’s shoulder as he sketches ideas for his project. Chelsea leaves to get the laundry and Nia, Booker and Tess enter the living room with their protest signs. Nia tells Raven that she should’ve asked her permission first, asking now if they can go. Raven still says no as Chelsea returns with her laundry. Nia tries to get Chelsea to join their cause because she’s an environmentalist, but Raven tells Nia to use her voice in safer ways. Raven walks out of the room, leaving Nia, Booker and Tess huddled together. Just then, Booker gets a vision of Chelsea looking at him in the car saying “You can protest all you want.” He tells the girls that they will be able to get Chelsea to take them.

Raven took Levi to her studio to work on the S.T.E.M. project and the kids find Chelsea in the kitchen making herself a sandwich. She puts her foot down, saying no to taking them because that’s what Raven said. Booker reminds Nia that his vision shows that they can get Chelsea to agree and Nia pretends to be sad, telling Chelsea that a donut would cheer her up. Chelsea agrees to drive the kids to Iconic Donuts and Nia thinks that when she sees the protest nearby, Chelsea will want to join, too.

Chelsea gets near the donut shop, but people are blocking the road past City Hall where the protest is taking place. At the studio, Raven realizes she hasn’t heard from Booker or Nia in a while and checks their location, seeing that they’re near City Hall. She calls Chelsea, ending up on speaker phone in the car. Chelsea realizes that she’s been tricked and gets mad. She asks Raven if she needs anything before she lets the kids know “What is what.” Raven tells Chelsea she’s got this and hangs up.“Well, what do you have to say for yourselves?,” Chelsea asks, upset with the kids. Booker says “We might as well show up for justice since justice won’t show up for us” and she tells him that was good, but asks why her “No” isn’t as good as Raven’s since they had already been told no by both of them. Finishing her lesson, she says “You can protest all you want, we’re still going home.” Booker hollers back to Nia that this was his vision and she tells him she knows.

In Raven’s studio, Levi comes out of a changing room with his project, a jacket made of different materials that has 56 accessories. “It’s my everything gadget,” he tells Raven, who tries to suggest some stylistic alterations, which Levi refuses. “I think you’d get a better grade if people wanted to wear it,” she tells him. Levi lets her know that he actually made 3 jackets and put a “Ravenous Designs” label inside them.

Back in the apartment, Chelsea returns with Nia, Booker and Tess to find Levi ready to head back to school with his completed project. He says “It was nice knowing you” to Booker on his way out. Alone with Raven, Nia apologizes, saying she just wanted to save the neighborhood. Raven tells her she needs to be more concerned about the people living inside the house than those outside the house. “At a protest, all you have to do is be at the wrong place at the wrong time,” Raven tells Nia. “But we can’t let fear control our lives or hold us back. So at the next protest, we’ll go as a family.” As punishment, Raven makes Nia and Booker wear the extra jackets Levi made, which have a buckle that keeps their arms locked to their sides.

Levi returns later with his grade, having earned a B+. He tells Raven that his teacher liked it, but would have giving him an A+ if he had paid attention to style. “You were right, esthetics matter.” Tess comes into the apartment with a box of donuts and Raven tells Nia and Booker they’re only for “Mamas and people who listen to mamas.”

Next Friday, Disney Channel premieres two back-to-back new episodes of Raven’s Home followed by a special short episode with puppets called “Far From Raven’s Home.” You can see a sneak peek of a song from the special below.