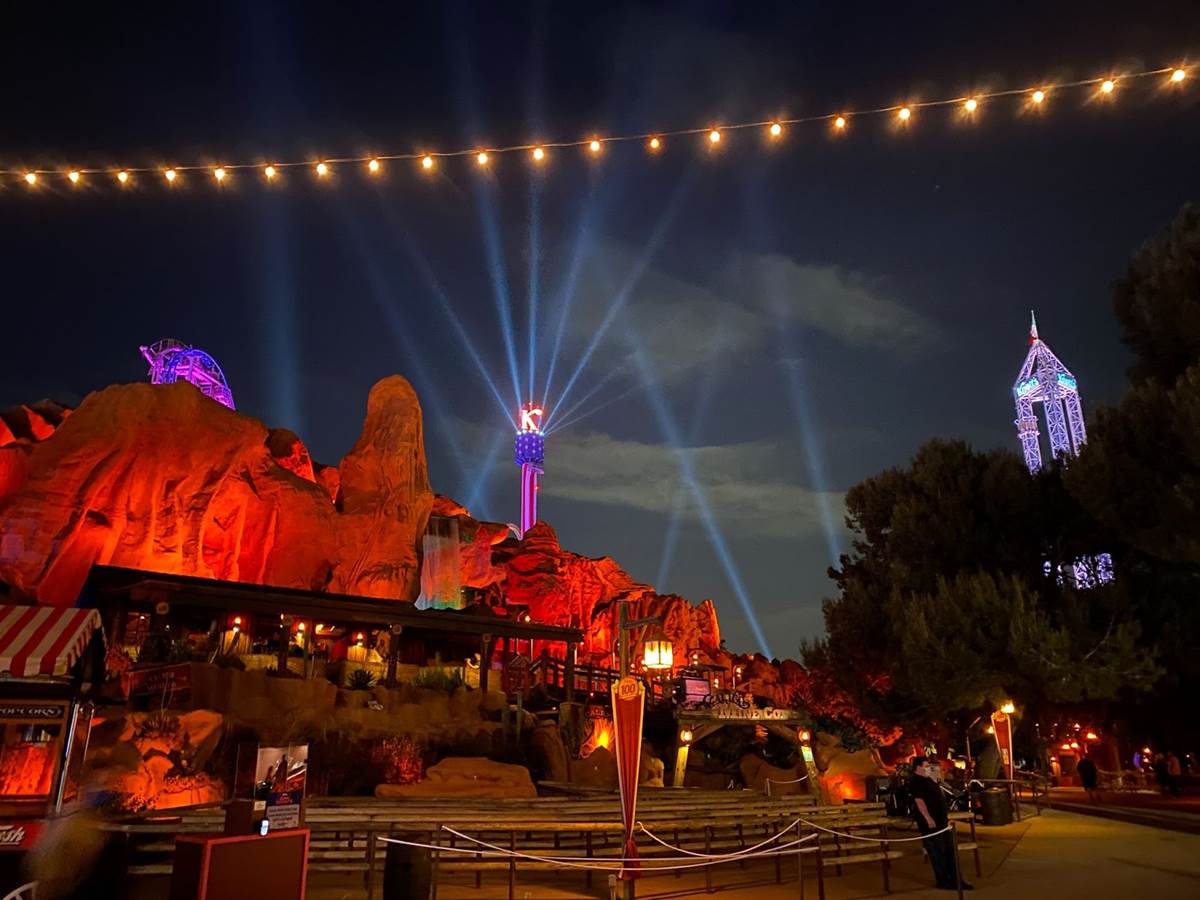 The Southern California theme park community came together in Buena Park last night to celebrate Knott’s Berry Farm’s 100th anniversary– not the anniversary of the park itself, but the anniversary of the literal berry farm (that later evolved into a famous chicken dinner restaurant and Ghost Town) founded on the same property by Walter and Cordelia Knott in 1920. Yes, this celebration was due to be held last summer but a certain pandemic got in the way. Thankfully, the event felt no less special than it would have a year ago. Heck, even Disney Parks Chairman Josh D’Amaro was on hand to help Disneyland’s Orange County neighbor usher in its second century.

As the evening began, attending guests and media gathered in front of the Calico Mine Stage for a 20-minute presentation filled with celebrity video tributes, musical performances, character appearances, and of course a tribute to Knott’s Berry Farm and its heritage delivered by the park’s Vice President and General Manager Jon Storbeck.

Upon entering Knott’s Berry Farm, guests were dazzled by new (and appropriately berry-colored) 100th anniversary decorations around Calico, and attendees of the event were treated to a sampling of some of the park’s tasty food and beverage offerings.

The big news to me during the presentation was that Knott’s 1971 Charles M. Schulz Theater (previously known as both the John Wayne Theater and the Good Time Theater) had been officially renamed the Walter Knott Theater in honor of the park’s founder and original proprietor. Guests were reassured that once indoor performances started happening again, the Walter Knott Theater would play home to Knott’s traditions such as “Snoopy On Ice!” during the Merry Farm season. 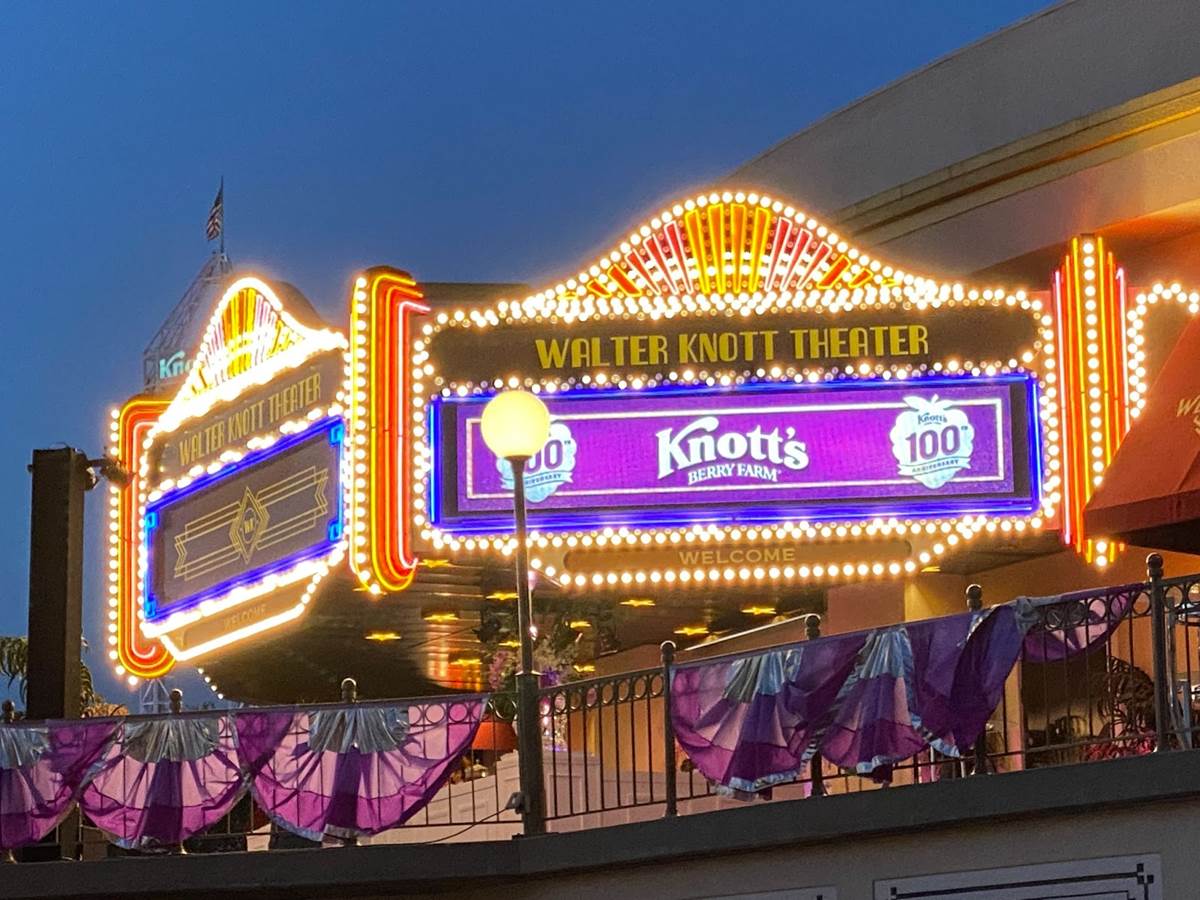 Other fun commemorative activities spread out around the park included photo ops for extinct Knott’s Berry Farm attractions such as Kingdom of the Dinosaurs, Soap Box Racers, and Sky Jump.

And what would a theme park celebration be like without characters? I spotted Whittles the prospector hanging around during the party, plus familiar friends from Knott’s Bear-y Tales and the Peanuts gang.

This morning marked the grand reopening of Knott’s Berry Farm after a couple weeks of Season Passholder previews, and I couldn’t resist stopping by just one more time to get a look at Ghost Town’s decor during brighter daylight hours. I also noted that the musical show “Happiness Is…” (introduced during 2020’s Peanuts Celebration seasonal event) is being performed regularly on the Calico Mine Stage.

And of course I had to finally take the plunge on my absolute favorite Knott’s Berry Farm attraction– the Timber Mountain Log Ride– for the first time in over a year.

During my visit today, I live-streamed a stroll around Knott’s Berry Farm while chatting remotely with Laughing Place’s Doobie Moseley. Together we checked out the setting for the current Knott’s Summer Nights event and the other special offerings in place for the park’s 100th anniversary, in addition to simply enjoying the park’s usual atmosphere and decor.

One final photo op I wanted to point out in Knott’s Boardwalk area is the giant “K” next to the informational plaque about the icon’s history. If you watch the very end of the 100th Anniversary Celebration video above, you’ll see the inspirational lighting ceremony for the new K perched atop the Sky Cabin tower, complete with very cool lighting effects, soaring music, and fireworks. It’s going to be a great summer at Knott’s Berry Farm.

Knott’s Berry Farm is currently open daily in Buena Park, California. Both theme park tickets and reservations are required for entry. For more information, be sure to visit Knott’s official website.