Susan Egan originated the role of Belle in Beauty and the Beast on Broadway and provided the speaking and singing voice for Megara in Hercules. On May 7th, she was the special guest at Happily Ever After Hours, a guest speaker virtual series from The Walt Disney Family Museum. During the hour-long event, Susan Egan answered questions about her incredible career from fans and moderators. Here are 10 things we learned from Susan Egan. 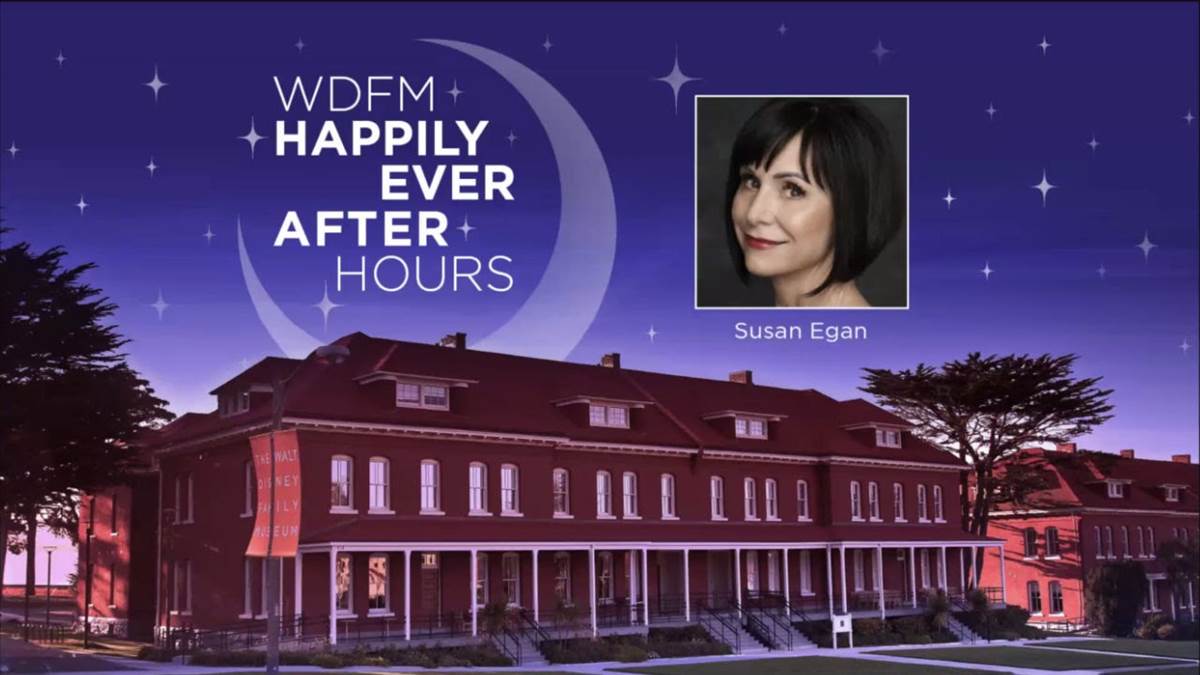 1. She Didn’t Expect to Be Cast in Beauty and the Beast

“I was new to New York and my agent said you should go,” Susan Egan shared about the audition experience for Beauty and the Beast. With spiky red hair and a punk rock look, her agent simply wanted her to meet the casting director. “I had not seen the movie. I had seen The Little Mermaid… and [Jodi Benson] sounded a lot like a Broadway actress named Liz Callaway.” Based on that connection, she chose a song from the show Baby originated by Callaway and thinks it set her apart from other girls trying out for the part, who were doing their best Paige O’Hara impersonation. “I think innately Paige and I are not dissimilar so I think my choices weren’t betraying her.” Because Disney Theatrical had added over an hour of new material to the show, having her own take on Belle also helped her as she proceeded through the audition process to land the role of Belle, her first Broadway show, which also earned her a Tony and Drama Desk nomination.

Tony winner Terrance Mann originated the role of the Beast, but at times, Michael Piontek stood in for Beast and Gaston. He also happens to be Paige O’Hara’s husband and Susan joked that on those nights, she felt like an imposter because he was going home to the real Belle. But working with Terrance Mann was a bit of a full circle moment for Susan. “I had gone to a Broadway show when I was 10 and he was in it, so meeting him, I was so nervous… and he could not have been more lovely, he put me at ease.” The production was caught in some behind the scenes drama on Broadway, with other producers and shows viewing Disney as invaders of their space. “We were kind of caught in the crosshairs of a lot of that bad press,” Susan explained, sharing that Gary Beach, the original Lumière, became a literal light for her. When things would get tense backstage, he would take Susan outside the Lunt-Fontanne Theatre to look at the long line of families waiting to get in. “You couldn’t be upset. It would put my heart in the right place to do the show every day.”

3. She Coaches Other Belles, Including on the Disney+ Series Encore

While most fans didn’t get to see Susan Egan coach another actress on how to play Belle until the Kristen Bell Disney+ series Encore, it’s something she’s been doing for a long time. Traveling around to colleges and community theaters, Susan Egan teaches a master class on all things Beauty and the Beast. One of the special moments in the episode was getting to teach the actress the adult version of “Home,” which has an alternate version for high school productions. “It was exciting to take the high school version of Home that she sang and explore the woman version of Home because I knew her story and how it applied.” She appreciates Encore for showing the long-term impact of high school theater experiences, hearing from them later about how that opportunity helped them feel comfortable in their voice and body, which can help in all areas of life.

4. She Had to Beg to Audition for Megara

“Wouldn’t you think that it would be like, well, she’s already working for the company, we should give the role to Susan?,” the actress joked when asked how the part came along. Directors Ron Clements and John Musker were looking for a Barbara Stanwyck-type. “I guess I was convincing enough as Belle that they didn’t see me as Meg.” While her dream was always to be on Broadway, doing that through Disney gave her a new dream of being a voice in a Disney animated feature. “I really wanted to audition. I was also a diehard fan of all these 1930’s, 1940’s actresses.” Every day on her way into work, she would ask to audition until they finally said yes. When she sat down with the directors to read the scene where Megara meets Hercules, their heads popped when they heard her Megara voice. “I was trying to tell you guys,” she quoted herself. “When I’m Belle, I’m acting. Meg is how I really live, it’s where my voice sits.”

5. Recording “I Won’t Say I’m in Love” Was a Humbling Experience

“It was amazing and mortifying,” Susan jokes, saying that she admired all of the actresses who played the Muses, all of whom were Broadway performers. “I had just listened to those five ladies record ‘Gospel Truth’ and then they were like ‘Okay Susan, it’s your turn.’” She felt intimidated by their powerful performance and then had to join them in a bubblegum pop song, which Susan Egan describes as a duet between Meg and the Muses. Alan Menken asked Susan to “Riff something” at the end and she had to confess that she didn’t know how to do that in front of some pros. The composer sat Susan at a piano and played an example of what he wanted so she could match it. “It was very humbling and also a greater honor.”

“Meg was the very first time I had ever done a voice over,” Susan shared, recording her dialogue while still performing the role of Belle. Because she couldn’t rely on her facial expressions, she learned to put more emotion in her voice. It occurred to her that a lot of people in the audience at Beauty and the Beast weren’t close enough to see her facial features clearly and she started to use those same techniques in her performance every night. Having several recording sessions with Tate Donovan and James Woods also allowed her to adlib a few lines. Woods, who would go on a rambling spree as Hades, sometimes made it hard for her to get a line in. During one take when he finally finished, she said “Are you finished, your oneness?,” which made it into the film.

7. An Interesting Fact About Meeting Meg at Disney Parks

“It’s always been so funny to me but there’s quite an audition process to be a face character in the parks,” Susan shared about the characters that do meet and greets at Disneyland and Walt Disney World. People are chosen based on their height, weight, eye color and facial shape to play characters and they’re usually trained to play multiple. In the case of Megara, women cast in that role also meet the same requirements to play Belle, mirroring her real-life journey from Belle to Meg.

8. Recording Dialogue for Spirited Away Was Unlike Recording for Meg

“It’s the exact opposite of what I did for Hercules,” Susan Egan shared about voicing Lin in the Academy Award winning Studio Ghibli film Spirited Away, which was distributed in the U.S. by Disney. “Instead of getting to do anything I wanted, I had to take the lines that were provided, watch Lin’s mouth and make sure mine was opening and closing at the same time.” On top of the technical aspects, she also had to act. The character of Lin was modified from her Japanese counterpart, who was more harsh in the original version. For the U.S. audience, the character was made more streetwise and sassy. Susan had ideas for the character, but inside the recording studio, they soon found that she was chosen because they wanted Lin to sound like Meg. But through that connection, she got to work on another Studio Ghibli dub, Porco Rosso, where she got to play a different type of character and act opposite of Michael Keaton.

9. Kristin Chenoweth Was Supposed to Play Her Role in Gotta Kick it Up!

“Kristin Chenoweth was supposed to play the character of the teacher and then she booked something else,” Susan shared about the fan-favorite DCOM she made in 2002. Her hair was long at the time and had to stay that way because she was on a TV series for The WB. “So they put me in that terrible wig!,” she joked. “I should never be blonde, never.” While most of Susan Egan’s castmates on the film were young, giddy, boy-crazy teenagers, America Ferera made an impression on her because while the other girls were flirting with boys on the crew, America was studying calculus. “It was a blast to do and it still lives on because of Disney+. Who knew?”

10. She’s Going on Tour This Winter with Disney Princess: The Concert

A one-night-only event at Feinstein's/54 Below with fellow Broadway actresses who played princesses on the stage quickly turned into a touring cabaret show. As the show grew in popularity and outgrew small venues, the artists had a hard time managing things and decided to call Disney before calling it quits. “It’s one of those synchronistic things where all the pieces landed at the right time,” Susan shared, sharing her surprise that executives at Disney were already aware of their Broadway Princess Party shows and liked what they were doing with the material. “They thought this would make a great symphony concert and it happened to coincide with The Ultimate Princess Celebration.” Disney was already looking for some kind of a live show component to the celebration and asked Susan and her team if they would like to become Disney Princess: The Concert. “So now, instead of just playing these little clubs, we’re in giant theaters with all the animation and special effects and magic that Disney brings to it.” Susan spent about 30-hours per week during quarantine working on the project, which will stop at 85 cities starting this November. “The added magic is that we’re all coming out of this hibernation with a show that is so celebratory and for every demographic.”