For the first time ever, Walt Disney Animation Studios has teamed up with a newcomer on a groundbreaking new series, Iwaju. Disney and Kugali teamed up today to give animation fans a taste of what’s to come when the series hits Disney+ in 2023 at Annecy Festival. While no plot elements or characters were revealed, we learned a lot about how the collaboration started and the incredible world being created. 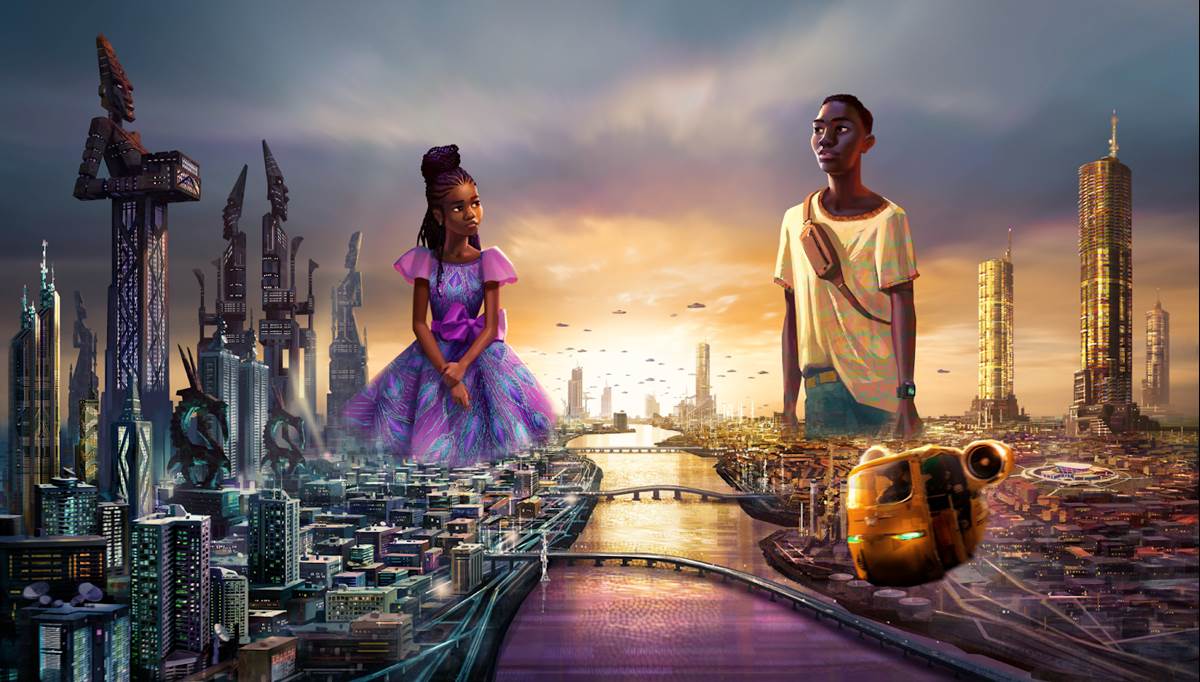 Kugali was formed from a podcast by longtime friends Ziki Nelson and Tolu Olowofoyeku, who were analyzing comics, animation, and video games from Africa. After two seasons, they ran out of media and realized there was a void they could fill. Partnering with visual effects artist Hamid Ibrahim, Kugali was born, starting as a web-based comic company.

Animation was always part of the vision for the company and during a BBC interview, Hamid specifically mentioned that they wanted to take on Disney Animation as a rival in the industry, a headline that was noticed one morning by Jennifer Lee, Chief Creative Officer of Walt Disney Animation Studios and executive producer on Iwaju.

In early 2019, the trio received a message from a Disney executive on Linkedin, a request they assumed was phony. “I think the person who reached out to us didn’t use Linkedin a lot, which sort of led more credence to this might not be something,” Iwaju director Ziki Nelson revealed, adding that following their BBC interview, they had a lot of requests from other companies that never turned into anything. But when one Zoom call turned into multiple, they realized Disney wasn’t pulling their chain. Having never made a studio pitch before, cultural consultant Tolu Olowofoyeku was surprised when the team at Disney Animation taught them how to make a pitch. “Imagine someone wants to send you on a mission and then they prepare you for that mission… They taught us how to pitch to them.”

“One of my initiatives really is that we, as Disney, can tell stories of the world, but by the people of the world,” Jennifer Lee shared about why partnering with Kugali aligned with her vision, similar to the way the studio has formed culture trusts on films like Moana and Raya and the Last Dragon. “I was blown away by the storytelling. In many ways it’s epic… There were themes that I had never seen put together in that way, there were folklore that I had never had access to.” The initial conversations started with a plan to create several animated shorts, each with a different style and from different artists. But as they got farther along, it became clear that there was an idea that was too good not to product that would be best served as a long form series.

For visual effects supervisor Marlon West, who’s Disney Animation career started with The Lion King in 1994, the project was too exciting to resist. “I was having a good time [working on Encanto] and I was working on my own little short on the side.” When he saw the superpitch, which included the Nigerian-inspired setting and afrobeat music, he knew he couldn’t just watch the final product, he needed to be involved.

For head of story Natalie Nourigat, who directed the next animated short from Disney Animation, Far From the Tree, having a graphic novel background made the project very appealing. “Head of Story gets more time with the creators and you kind of get to be that bridge between Ziki, Hamid, Tolu and the story artists,” she shared, her first time serving as a head of story. Jennifer Lee added that Natlie has the special skill required to be able to pull all of the ideas from multiple contributors together and make a decision that best serves the story. “This idea that we build a team that collaborates instead of drives in a way that diminishes Kugali was important,” Jennifer added.

Due to the international scope of Iwaju, had the Disney Animation team not been forced to work from home, they might not have been able to collaborate as closely with the Kugali team.  “If we had tried to do this in Burbank, in our hat building, working with Hamid, Ziki and Tolu, they would be on a big giant screen and we would be in a conference room, tiny faces in a conference room,” Marlon explained about the studio’s typical teleconference system. With Zoom, everyone’s faces become equal in size, it’s easy to see everybody and communicate better. “It’s a sight to see when we all get together on a production meeting. There’s just shy of 50 people working on the [project] right now.”

While it’s too soon to reveal any details about the plot of characters, the Kugali team teased the Annecy audience with some details about the world of Iwaju, which is inspired by Lagos. “Lagos is the commercial capital of Nigeria and what’s unique about Lagos is that it’s physically separated into two areas, there’s the island and the mainland,” Tolu explained, adding that the island is a more affluent spot connected to the mainland by several bridges, while the mainland is more impoverished and overcrowded. “That means it has very unique problems that require very unique solutions.” In Iwaju, many of those problems are solved.

Flying cars will solve many problems, helping people avoid flooded roads and even offering door-to-door delivery in high-rise skyscrapers. Flanker taxis on the mainland have wheels to drive on roads, but propellers that allow them to go up and down. Your typically automobile can zigzag through traffic with wheels that can go completely parallel at a moment's notice. But your more luxury cars have wheels that can transform into blades, allowing them to fly. Another premium feature for the wealthiest residents includes the ability to project a smooth surface over potholes for a bump-free ride.

The mainland has an iconic skyline with huge, spiraling towers as a solution to the overcrowding problem. Over on the island, architecture is a little more expressive, with less of a focus on economics. Houses are shaped like traditional huts, but with domed ceilings, solar panels, and tech that would make Tony Stark jealous. And while your average resident has advanced mobile phone technology, the wealthiest have their phones built into their glasses with augmented reality.

While we don’t know much about the story, Ziki did share that it will look at class divide and the consequences it has on society, a major issue in Nigeria. “It’s really about that inspiration for aspiration and desire to try to engineer society forward in a more positive way,” he concluded as the presentation wrapped.

Iwaju is expected to start streaming in 2023 on Disney+.