After meeting this mysterious variant Loki and the TVA are hunting last week, this week’s episode of Loki let us get to know her a lot better as she and the titular character set off on their own adventure. With two different versions of Loki working together, it’s hard to guess who is going to betray who and whether or not you can trust either one of them. 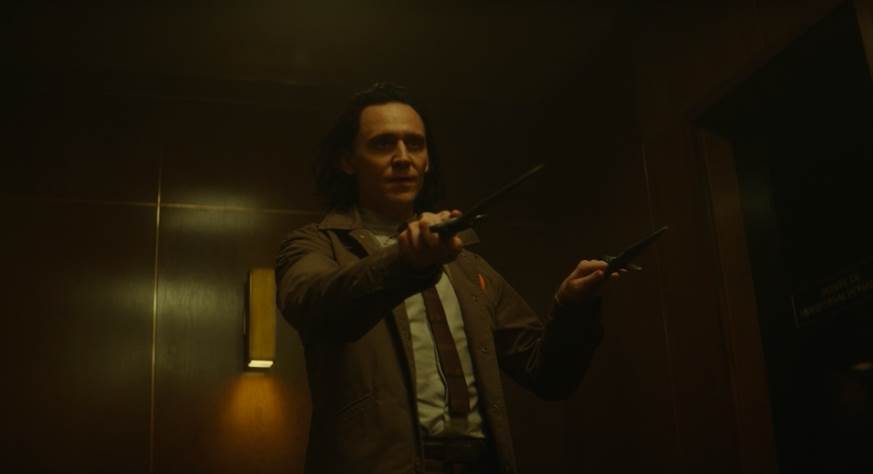 This episode opens up with the variant and the hunter she abducted sitting in a restaurant, enjoying drinks as if they are friends. They share a friendly conversation for a bit before the variant asks about the timekeepers and how many people are guarding them. The hunter hesitates before a time jump, which seems to unsettle her further. The variant asks about the timekeepers again and the hunter begins to question things. The variant tells her she’s just tired and we then see that she is using her enchantment powers to create an illusion in the hunter’s head. The variant learns that she can take gold elevators to the timekeepers before she turns to the security cameras (from the store in last week’s episode) to see that Loki, Mobius and the rest of the team has arrived.

Jumping back to where we left off after last week, the variant walks through her time gate into the TVA and begins attacking guards. She takes out several of them before Loki arrive and takes his daggers from the locker in which they were stored. Loki catches up to the variant and tries to get some information before she attacks him. Ravonna shows up as they’re fighting and as she takes a swing at them, Loki uses the TemPad to open a time gate, which they both fall through.

As they land in a mysterious new location, they fight again for the TemPad and the variant gets angry when Loki refers to her as “a Loki.” The variant eventually gets device and sees that it needs to be recharged. Loki gets it back and uses his magic to hide it. They’re interrupted by a small meteorite of some sort that crashes through the roof and the variant asks where Loki sent them. They step outside to learn that they have been sent to Lamentis-1 in the year 2077, which the variant calls the the worst of all the apocalypses saved on that TemPad because no one makes it out of there.

The two of them scramble through the falling meteors before taking shelter in a mining shed. The variant tries to enchant Loki, which doesn’t work because of his “mind is too strong.” Loki proposes a truce until they can recharge the TemPad and both get out of there before the impending apocalypse. The variant tells him the plan he interrupted was years in the making and as soon as they charge the TemPad, she’s going back to the TVA to finish what she started. 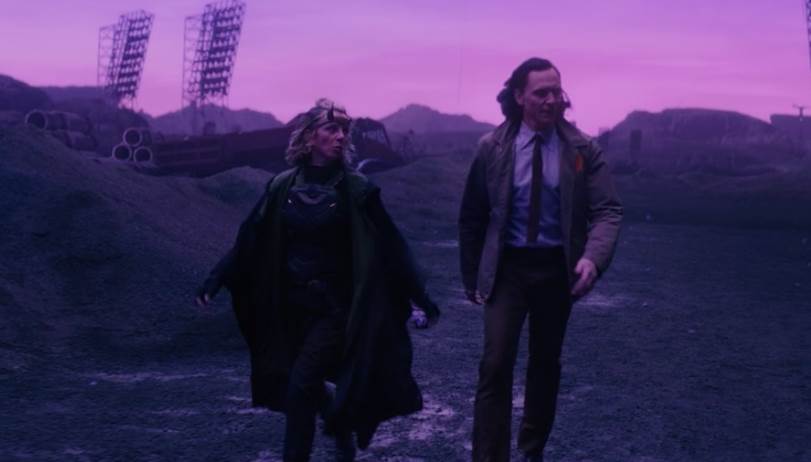 The two go out in search of a power source and Loki learns that the variant prefers to be called Sylvie, which is great because I’m tired of typing “variant.” This name is significant because it appears to be a connection to Sylvie Lushton, a character from the comics who gets godlike powers when Asgard makes its new home in Oklahoma. She eventually takes on the monicker of Enchantress and joins the Young Avengers. This could be in the cards for her in the MCU as well.

The two of them get to a small mining town that has been largely destroyed by the meteor shower. Sylvie tries to trick Loki into giving up the TemPad so she can charge it using a light on a building but Loki doesn’t fall for it. She explains that the device will need a massive power source and the light would not have worked.

The pair reaches a home where they try to get information out of an old woman. Sylvie kicks down the door and is immediately blasted with large weapon that knocks her several yards back. Loki tries to trick the woman by masquerading as her husband before she blasts him too. The woman tells them everyone is on the ark being used to evacuate the moon. Sylvie explains that the ark would have enough power to recharge the TemPad and the woman tells them how to get there.

When they get to the train they need to take to the ark, they discuss their plan for how to get on board. Eventually, Loki disguises himself as a guard and treats Sylvie as a prisoner. With the help of some enchantment they manage to get past some difficult guards and get on the train.

The two take a seat in a luxury car and begin a conversation that leads to Loki talking about his mother. It’s clear he’s emotional when talking about her, knowing what happens to her in what was his future. The two discuss the concept of love, which eventually leads to Loki explaining that there were “a bit of both” would-be-princesses and other princes in his past. Director Kate Herron took to her Twitter account to explain how important it was to her to have Loki acknowledge that he is bisexual.

From the moment I joined @LokiOfficial it was very important to me, and my goal, to acknowledge Loki was bisexual. It is a part of who he is and who I am too. I know this is a small step but I’m happy, and heart is so full, to say that this is now Canon in #mcu #Loki 💗💜💙 pic.twitter.com/lz3KJbewx8

Sylvie eventually falls asleep and awakes to find Loki back in his normal clothes and sining drinking songs. She notices a man looking at him before he makes his way out of the car. Loki finishes his song and his drink before smashing his glass on the bar and yelling “another,” much like his brother in the first Thor film.

Sylvie tells Loki she noticed someone watching him and eventually some guards enter and ask them for their tickets. Loki of course doesn’t have any tickets and that leads to a fight. Loki and Sylvie handle themselves well but eventually Loki gets tossed from the train. Worried about the TemPad, Sylvie follows him. When they meet up off the train, they learn that the TemPad was broken when Loki was thrown from the train. Now trapped on this dying moon, they decide to head for the ark.

As they walk to the ark, Loki tries to get more information from Sylvie and she explains how her enchantment works. She explains that with some of the tougher minds, she needs to create an illusion based on the person’s memories. She tells him that’s how she got information from the hunter, creating a memory from her life before she ever worked for the TVA. that of course shocks Loki as he was told TVA workers were created by the timekeepers, but Sylvie explains that this hunter was previously a regular person on Earth. She tells him all of the TVA workers are variants and Loki tells her they don’t know that. They arrive in a panicked city and see the ark ahead of them. A voice announces that there are just five minutes until launch. The two of them scramble through the rioting city and look up to see their impending doom raining from the sky. This whole thing is done in a single shot and it is cinematically stunning. The sequence is loaded with action and horror and they way it is shot puts the viewer right in the middle of all of it. Eventually, they look up and see the ark destroyed by the storm of meteors and all hope is lost as the episode comes to a close.

This episode was a departure from the previous two, finally getting outside of the TVA for an extended period and changing up the feel of the show. However, it does so in the best way possible. The episode was loaded with action and while the TVA-based episodes were incredibly interesting, it was refreshing to be put in a new setting. We didn’t learn a great deal of information about Sylvie here, but we’re starting to peel back some of the many layers of this new character and she seems like she will be a very exciting addition to the MCU going forward. That is, if she and Loki can make their way off this doomed moon. Of course, Loki is ever the trickster so maybe that TemPad will mysteriously work at the last possible second.