Hello and welcome to Laughing Place’s regular recap of the Lucasfilm animated series Star Wars: The Bad Batch on Disney+. This week’s new episode, entitled “Bounty Lost,” is the ninth episode of the show’s first season. 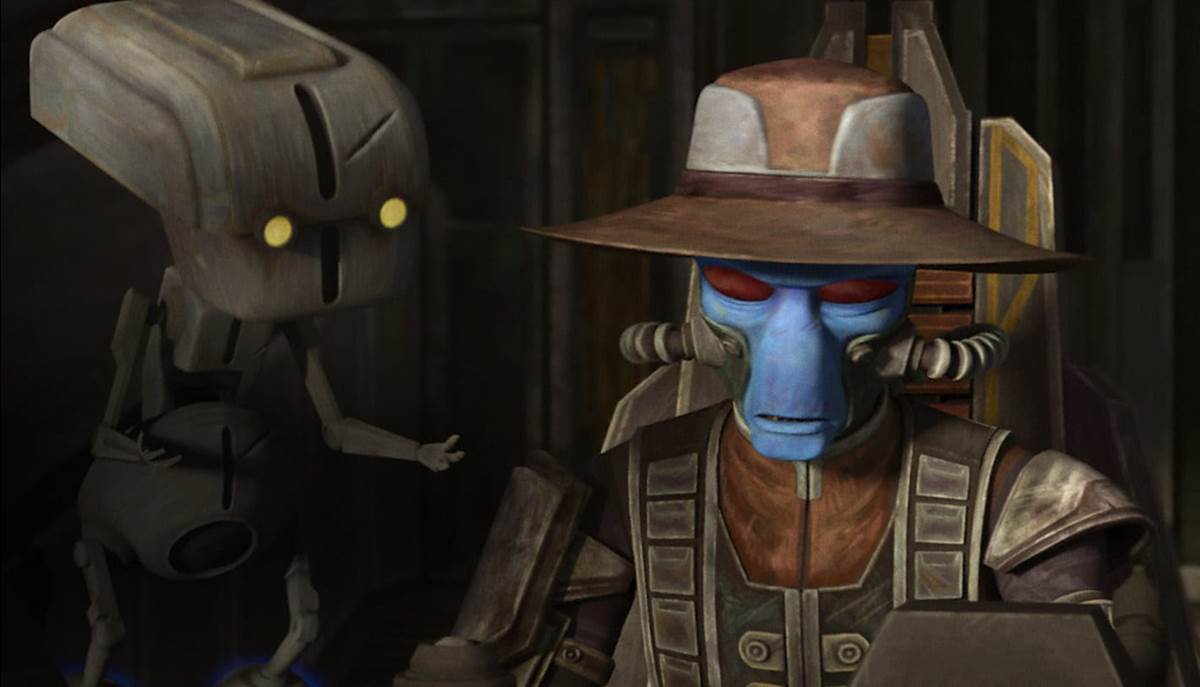 “Bounty Lost” opens with the titular Bad Batch being pursued by Crosshair’s vessel through the atmosphere of the planet Bracca. Tech (voiced by Dee Bradley Baker, as are all the Jango Fett clones) prepares to jump to hyperspace, but Hunter doesn’t want to leave without Omega, who has been taken by the bounty hunter Cad Bane. “We’ll have no chance of finding them if Crosshair shoots us down,” argues Echo. Tech says the Havoc Marauder’s rear deflector shields are failing, and Hunter allows him to make the jump. On Cad Bane’s ship, Omega wakes up in an electronic holding cell and the droid Todo 360 (Seth Green) refuses to let her out. Todo says Omega’s communication device has been confiscated and placed in a secure compartment, and that “Mr. Bane does not respond well to prisoners who are difficult.”

Cad Bane (Corey Burton) comes around the corner and inquires as to how his asset is doing. Omega tells him her name and demands to know where she is being taken. “You’ll be sorry when my friends come for me.” “Your friends are long gone. I made sure of that.” Todo asks Bane to fix his leg, but he wanders off back to the cockpit where he reports to the Kaminoans via holo-transmission that he has the girl alive, and to bring his unmarked credits to a predetermined rendezvous point. On Kamino, Lama Su (Bob Bergen) sends Taun We (Rena Owen) to their abandoned facility on Bora Vio, because he says Nala Se’s (Gwendoline Yeo) attachment to Omega has threatened their operation enough. He orders Taun We to terminate Omega after retrieving her genetic material. Meanwhile, Omega offers to fix Todo’s leg, but Todo refuses.

On the Havoc Marauder, Echo recalls that Cad Bane “had multiple run-ins with the Jedi” during the Clone Wars. Tech says Omega is more valuable than they realized because of her “pure, first-generation DNA,” meaning she is a genetic replica of Jango Fett, much like Jango’s “son” Boba, who was evidently originally code-named “Alpha.” He says Boba disappeared at the start of the war, making Omega “the sole living source of Fett’s raw genetic material.” They figure out that the Kaminoans put the bounty on Omega, and Hunter orders Tech to check with Cid to see if her contacts know anything. On Cad Bane’s ship, Omega convinces Todo to let her help him repair his leg, and the droid opens the cell door. Todo says he’s been working for Bane for many years, but Omega replies that “he’s not very nice to you.” While working on the repairs, Omega manages to deactivate Todo 360 and retrieve her comm device.

Cad Bane comes out of hyperspace above Bora Vio and lands on the platform of a cloud city similar to what we’ve seen on Bespin. Bane orders Todo to come to the cockpit to no response, so he returns to the rear cabin to investigate, and finds Todo “unconscious” on the floor. He reactivates him and tells the droid to wait in the ship while he pursues Omega into the floating city. Omega calls out to Clone Force 99 using her transmitter, and manages to speak with Hunter. “The signal’s too weak to establish a direct connection trace,” says Echo, so Tech requests that Omega create a power surge to help them locate her. She activates a panel, but is then immediately recaptured by Cad Bane before Tech can get a good read. Bane smashes Omega’s communicator and begins dragging her back to the ship, but Todo reports an unidentified ship approaching.

“You’re lucky they want you alive,” says Bane as he pulls Omega through the station’s hallways. They hear a blaster go off and Bane cautiously rounds a corner to find Taun We dead on the ground. Fennec Shand (Ming-Na Wen) steps out of the shadows and says, “She was my score first.” Shand takes the payment from Taun We’s corpse and Bane says, “Hand it over and I’ll let you walk outta here.” Fennec offers to trade the case for the girl and Bane agrees, but Todo comes up behind her and grabs the case. A blaster fight breaks out between the two bounty hunters and Cad Bane rolls a thermal detonator toward Fennec Shand, who kicks it toward Todo 360, who shatters through a window causing the payment case to break open and all the credits to spill out. Omega runs away and Bane orders Todo to find her while he deals with Fennec Shand.

Bane rounds a corner and gets hit with an explosive that Shand had armed on a wall, knocking him to the ground. Omega sneaks her way through the facility and comes across a group of cloning tanks with green liquid and what looks like bodies inside. She activates another control panel and attempts to send out another signal to the Bad Batch, who track her to the Lido system as Echo tries to pinpoint her exact coordinates. The Havoc Marauder jumps into hyperspace again as Clone Force 99 heads to help their new friend. On the station, Todo vows to recover the target when he finds Cad Bane’s seemingly lifeless body on the ground. Fennec Shand locates Omega in the cloning chamber and tells her she should thank the bounty hunter for killing Taun We: “What the prime minister has planned for you is far worse than why I’m here,” says Shand.

“What does he want me for?” asks Omega, to which Shand replies, “You already know the answer.” Omega looks up at the cloning tanks ominously. Todo enters the room and Fennec immediately kicks the droid to the floor, but this allows Omega to press some buttons on the console, opening up one of the tanks and dumping a strange being out onto Shand. Omega runs out to the exterior part of the station’s structure, where Cad Bane once again emerges from the mist and holds her at blasterpoint. “Playtime’s over, little lady,” says Bane, but Fennec Shand comes up from behind Omega and sends a bolo hurtling into Bane’s hand, disarming him. Shand and Bane fight on the ledge while Omega sneaks away again and starts climbing a ladder down to a lower level. Todo 360 hovers down to her and tries to take her back up the ladder, but Omega jumps onto the floating droid and both of them tumble to a platform below.

Todo begins short circuiting and can’t right himself as Omega makes her way further downward and into an escape pod. She activates the pod just as Todo grabs ahold of its front and the droid is ripped away by sheer inertia. Cad Bane and Fennec Shand continue their fight as Todo calls Bane to report the target is getting away. “Get to the ship!” yells Bane, who tries to fry Shand with his flamethrowers but finds himself wrapped in her grappling cable. Shand kicks Bane over the edge of the platform, but he activates his hoverboots and returns to the ledge. In the escape pod, Omega tries to override the controls but instead gets intercepted by the Havoc Marauder, where Wrecker and Hunter welcome her back aboard. Omega asks why the Kaminoans are after her, and Hunter tells her she’s more valuable to them than all the other clones. “You’re different.” “Different how?”

Cad Bane returns to his ship and tries to fire up the engines, but Todo says the systems are not responding. “They appear to have been sabotaged.” Bane watches Fennec Shand’s ship fly off and growls to himself, while Shand reports back to Nala Se via hologram. “As long as she is not in the hands of Lama Su, she is safe,” concludes Nala Se. On the Havoc Marauder, Omega can’t sleep because she keeps thinking about the cloning tanks: “I don’t want to end up an experiment in a tube.” Hunter swears that won’t happen, and that the Bad Batch will protect her against any other bounty hunters Lama Su sends. “You don’t have to worry. You are never going back to Kamino… I promise.” New episodes of Star Wars: The Bad Batch are released Fridays on Disney+.