TV Recap: “Gabby Duran and the Unsittables” – Gabby Learns the Importance of Family Heritage in “Ratitas and the Ultras”

Gabby continues to do her thing in the fourth episode of season two of Gabby Duran and the Unsittables. In “Ratita and the Ultras,” the best babysitter in the universe discovers the importance of treasuring your family’s heritage when she trades an heirloom for the latest pair of sneakers. Here’s a full recap. 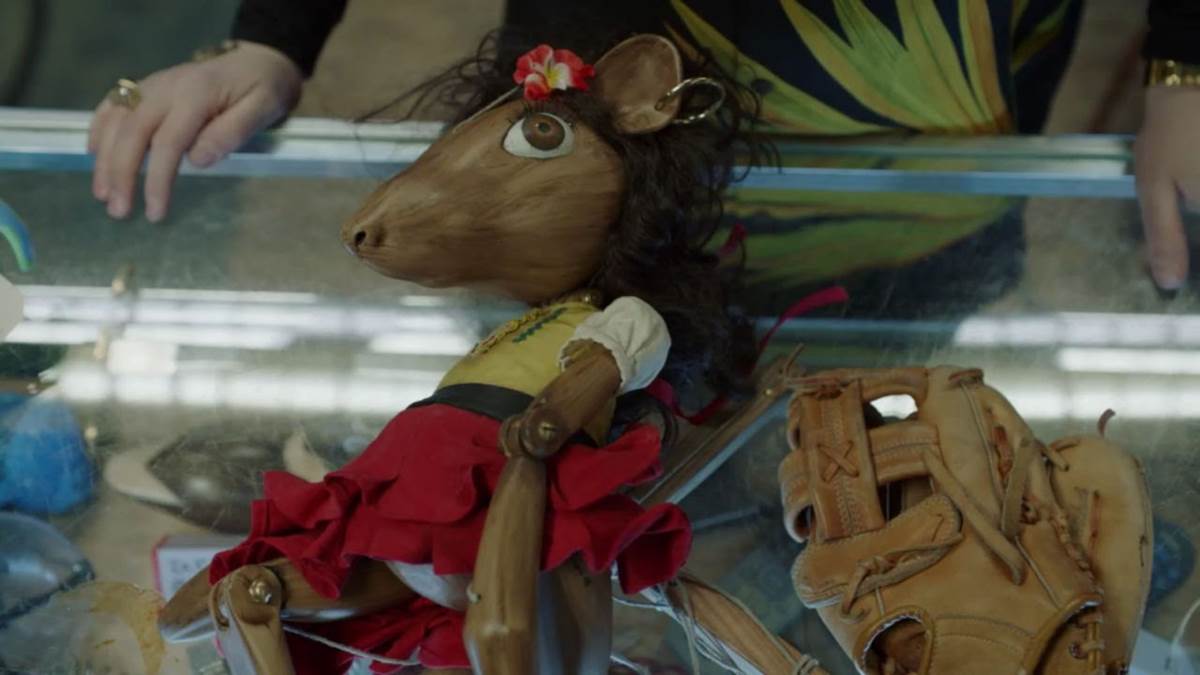 Gabby shows up at school wearing Platinum Ultras, white sneakers with glowing blue accents that impress all her classmates. When one suggests that they aren’t that cool, the shows emit an electric charge that knocks her off her feet. And when Gabby is ready to get to class, the shoes cause her to levitate off the ground to the applause of the other students. But actually, it was all a dream and Gabby fell asleep in a booth at Luchachos, looking at her laptop screen and seeing the shoes she wants so badly, which cost $500.

When Gabby tells Jeremy about how badly she wants the shoes, he tells her about an alien who buys human stuff and resells it to other aliens who think it’s rare. Soon after, Gabby and Jeremy arrive at an abandoned stripmall with a wagon full of junk Gabby wants to get rid of. Inside an elevator, Jeremy pushes all the buttons, which takes them to a secret basement pawn shop for aliens. Among the items in Gabby’s wagon is a wooden marionette puppet of a female rat, the name written on its foot: “Ratita.” Gabby receives $700 for her stuff, more than enough to buy her shoes. Jeremy brought with him one of Principal Swift’s bowties, trading it in for a paper fortune teller.

Jeremy shows his fortune teller to Wes, who tells him he got a worthless cootie catcher. Jeremy insists that it tells real fortunes and Wes plays along, getting a message that says “Beware.” He walks to the kitchen and Jeremy stops him just in time before a chandelier falls, which would have hit him in the head. Swift arrives home and when the boys tell him about the magical fortune teller, he wants to join in.

The Platinum Ultras arrive in a sleek metal box and when Gabby slides out the compartment, a glowing blue light emits. She pulls the sneakers out and puts them on, admiring their blue glue. Walking to the living room, she shows them off to Olivia, who isn’t interested. Just then, their mom comes in freaking out because she can’t find Ratita, referring to it as a family heirloom. Gabby tells her mom that she sold it and learns that it was made by her great grandfather, who used it to make a living performing on the streets in Venezuela. Gabby asks why her mom never told her before and we see a montage of many times that Gabby was told about it when she wasn’t paying attention. The family is supposed to have a video call with their grandma and she expects to see the puppet. Gabby is given two options: Get Ratita back or tell her grandma she sold it herself.

Gabby returns to the pawn shop with her sister and asks to buy Ratita back. Unfortunately, the owner just sold her to a “Torquad,” but he gives Gabby the address of their temple. The girls sneak into what looks like an abandoned building and inside, they see a mural of a rat god that looks just like Ratita. Going further into the building, they find cloaked figures on the floor worshiping an altar, on top of which sits Ratita.

Chaos ensues for Wes, Jeremy and Principal Swift, who are so convinced that the cootie catcher is magic that they track down the girl who made it. Appealing to a girl named Kimmy and her mother, they end up getting the door slammed in their faces. Wes believes the only option is to destroy the fortune telling device, but Swift says they should let it guide them on what to do.

While thinking about a way to get Ratita back, Olivia reveals to Gabby that Ratita is the reason her ancestors were able to move to America. Using her sneakers, Gabby sneaks around the hooded figures and picks up the puppet. Turning around, she notices that all of the cloaked aliens have risen and are looking at her. Using the marionette strings, the makes Ratita dance and moves her way through them closer to Olivia by the exit. They make a run for it, but soon find themselves cornered in a dead end. Gabby pleads for them to let them take Ratita, explaining the puppet’s significance to her family. They agree to make a trade for her Platinum Ultras and she thinks they want them because they’re cool, but they form a circle around them and start to feast on rubber.

By a serene lake, Wes, Jeremy and Swift arrive with a wooden canoe and a bow and arrow. They place the cootie catcher on the boat and push it off into the lake. Swift lights the tip of his arrow on fire and shoots it towards the boat, but he misses. They suddenly realize that the cootie catcher might not have been magic after all, but as they say it out loud, lightning strikes the boat and red glowing dust swirls out.

The last scene shows Gabby making Ratita dance on the coffee table with her grandma watching from her laptop. All’s well that ends well.

Gabby Duran and the Unsittables will return on Friday, July 2nd, with a new episode called “Mimi from Miami.” Here’s the episode description from Disney Channel:

Gabby gets sucked into a game of one-upmanship when her friend Mimi from Miami visits to celebrate their shared birthday.