With last week’s episode leaving Loki and Sylvie stranded on a moon that was about to be obliterated, we were all left wondering how they would survive the impending apocalypse. Well, we got that answer and so much more in this week’s episode titled “The Nexus Event.”

The episode opens with a look at Asgard, where we find a young Sylvie playing in the palace. TVA agents, led by Ravonna identify Sylvie as a variant and they take her and reset her timeline. We watch the child go through the same process Loki went through, which was funny then, not so much now. As Ravonna leads Sylvie to the judge, the child manages to escape by swiping Ravonna’s TemPad and creating a gate.

We then see Ravonna come face to face with the Timekeepers before the title card comes up. When we come back, Ravonna exits the Timekeepers’ room and is greeted by Mobius, who asks if she’s ok. She tell him she’s not and that no part of their current situation is ok.

Mobius asks to speak with Hunter C-20, telling Ravonna he needs to figure out what she was talking about when they found her at Roxxcart. Ravonna informs him that the hunter is dead, which shocks Mobius. She tells him the hunter’s mind was scrambled and she rapidly declined once they got her back. She also tells him nobody else in the TVA knows about this and that he can’t tell anyone.

We then cut to Lamentis-1, where the apocalypse is drawing closer and Loki and Sylvie appear to have accepted their doom. Sylvie finally opens up to Loki and admits she remembers her life on Asgard. She explains that the universe is trying to break free by creating chaos and the TVA is trying to control that chaos. She tells Loki about when the TVA took her and how she’s been on the run ever since. She also explains that wherever she went, she would cause a Nexus Event and the TVA would find her, hence her hiding out in apocalypses plan. 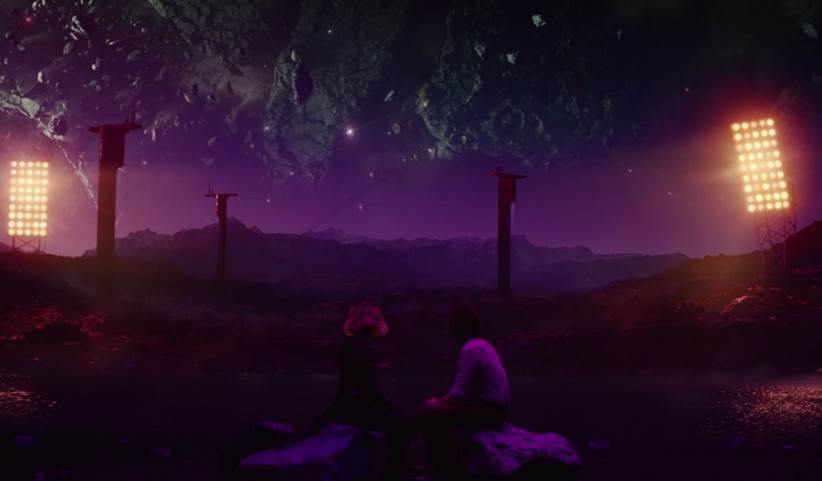 Mobius and the TVA scramble to try and find the two missing variants by looking for even the slightest Nexus energy. Hunter B-15 asks Mobius if there is any news about C-20 and he of course tells her there is not. B-15 is visibly distraught for a moment before she tells Mobius they need to find these variants.

Loki and Sylvie continue to bond in the face of death and their connection creates a branch, which the TVA notices. As the moon begins to crumble, Mobius stresses the severity of this branch and the TVA agents get to Lamentis-1 just in time to save Loki and Sylvie.

The two of them are brought back to the TVA as prisoners and are brought to separate rooms. Mobius and two guards bring Loki to his office where he tries to warn Mobius that the TVA is lying to him. Remember, last week we learned that TVA agents were once variants who have had their minds erased. Mobius shrugs him off and the guards throw loki through a red time gate.

Loki ends up in a familiar, Asgardian-looking room. Confused, Loki looks around before Lady Sif enters holding a lock of her own hair in her hand. She blames Loki, who now realizes he is in a bad memory prison, and hits him several times before leaving. Moments later, she enters again, says the same things, hits Loki again and leaves the same way. It’s a time loop prison.

Mobius meets with Ravonna in her office and tries to get her to allow him to interrogate Sylvie. She refuses and tells him to continue to work on Loki. On his way back to his office, Mobius checks in with B-15 who is part of the team guarding Sylvie’s room. Interestingly, Mobius mentions that the TVA has brought in “Kree, Titans, vampires” but Loki and Sylvie seem to be the most difficult. This is the first mention of vampires in the MCU, which could be setting the table for the Blade film we know we will eventually be getting. Before he walks away, B-15 asks Mobius if Loki said anything to him. He tells her about Loki’s warning that the TVA is lying to him. Something is clearly going on with B-15 at this point.

Back in the time cell, Loki pleads with Sif and delivers a moment that clearly shows us that he has progressed a great deal from whatever time it was that he did this to her. She doesn’t hit him this time and when she leaves, Mobius enters instead of her again. 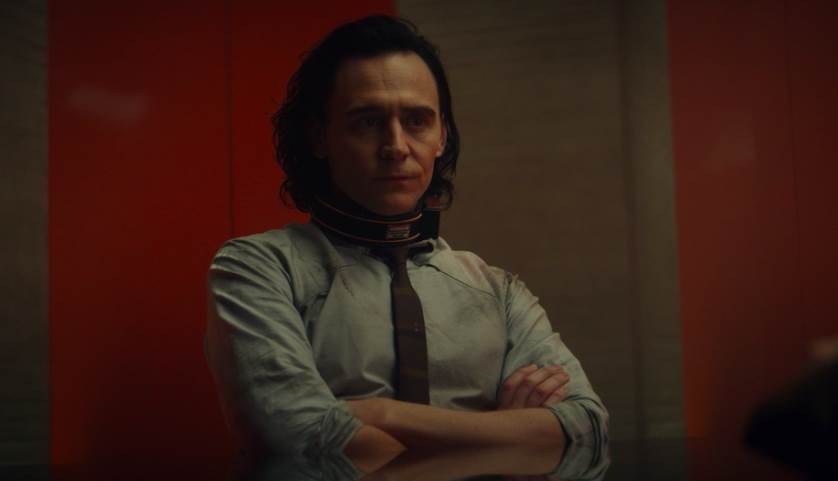 Mobius takes Loki back to his office ot begin his interrogation. After some back and forth, Mobius asks what caused the Nexus Event on Lamentis. Loki spins a lie about how he was pulling the string and he planned to betray Sylvie. Mobius tells him that Sylvie has already been pruned, which of course gets a reaction out of him before he tries to play it off. Mobius sees through his lie though and points out that the two of them were “swooning over each other,” which created the Nexus Event. Loki becomes frustrated and tells Mobius they are all variants who were all taken by the TVA. He tells Mobius he had a life and maybe a family. Mobius appears to believe him for a moment before he shuts him down and the guards throw Loki back in the time cell.

B-15 storms into Sylvie’s room, opens a gate and tells the prisoner to come with her. In Ravonna’s office, Mobius is celebrating closing the Loki case with his boss. Mobius is clearly not satisfied though and begins to question Ravonna. She tries to urge him to relax and celebrate his victory. She even concocts a lie about how she was trying to protect him from Sylvie because she saw what happened to C-20. Mobius accepts her explanation, but when her back is turned, he swaps their TemPads and quickly makes his way out of the office.

B-15 brings Sylvie back to the apocalypse where they first met. She asks what Sylvie did to her when she was enchanted. Sylvie explains to her that the TVA took her life from her just like they did to everyone else. B-15 asks Sylvie to show her and she uses her enchantment again. B-15 is brought to tears and says she looked happy before asking Sylvie “what now?”

Mobius examines Ravonna’s TemPad and finds a video from the interrogation of C-20. The hunter is trying to explain that she was shown her past life and she clearly believes the idea that Loki has been telling him. Ravonna then enters and says she’s “ending thing.” That’s enough evidence for Mobius to buy Loki’s story.

Mobius finds Loki in the time cell and tells him the Nexus Event he and Sylvie created could bring the whole TVA down. After some convincing from both sides, they agree to work together again, this time against the TVA. When they leave the cell though, they are greeted by Ravonna and four minutemen. Ravonna asks for her TemPad back and Mobius gives it to her. They try to play it cool for a moment but it’s clear they are in trouble so Mobius tells Ravonna the one place on the timeline he would like to go is back to his old life. Ravonna orders a guard to prune Mobius and looks away as he does.

The guards then take Loki out of the room. As he is led down the hallway, Ravonna walks into Sylvie’s room and learns that B-15 had been in there with her. Ravonna puts out an alert for B-15 and leads Sylvie out of the room. Both Loki and Sylvie are led to the elevator to the timekeepers. 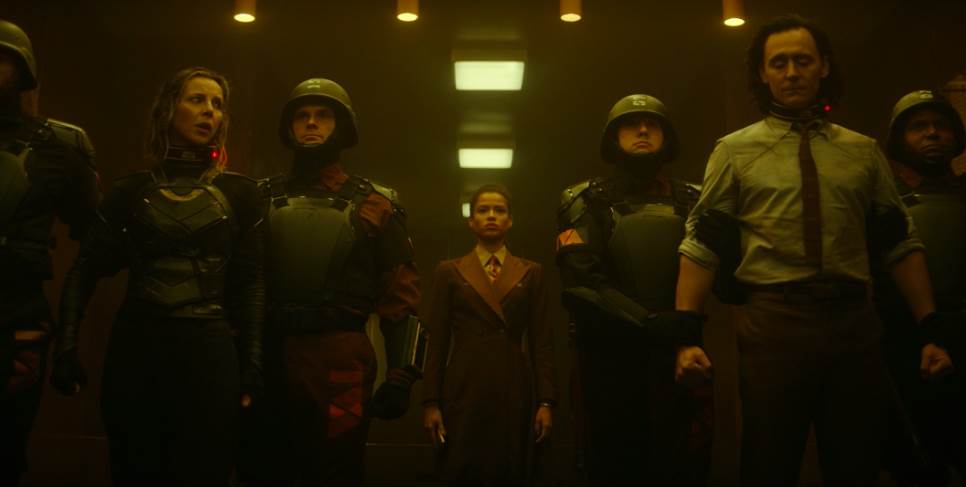 Ravonna leads the two of them to the Timekeepers who inform them that they are to be killed. Loki and Sylvie remain defiant and Sylvie even tries to take a step toward them before Ravonna uses the collar around her neck to loop her back. When the Timekeepers give the order to kill them. Sylvie tries again and this time Ravonna’s control glitches and we see B-15 enter. The hunter frees Loki and Sylvie and gives the latter a weapon. A fight breaks out that mirrors the throne room scene from Star Wars: The Last Jedi and eventually ends with Sylvie decapitating one of the Timekeepers, only to learn that it was actually some kind of android.

Loki and Sylvie share frustration as they realize they still have no idea who created the TVA. After a moment, Loki decides to open up to Sylvie and tries to explain his feelings for her. He grabs her by the shoulders and before he can tell her, Ravonna prunes him. Sylvie gets the weapon from Ravonna and demands that she tell her everything as the episode comes to a close. 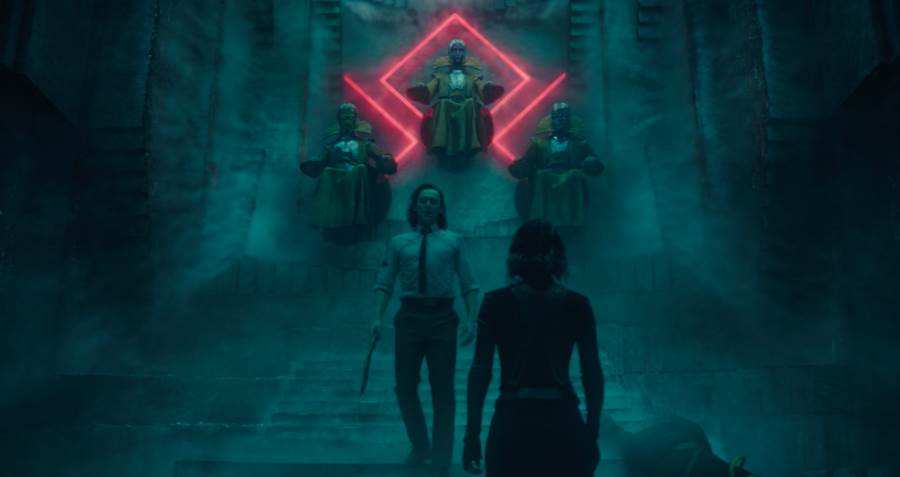 Except the episode is not quite over yet. We get a mid-credits scene in which Loki wakes up in a mysterious new location. He asks if he is dead and a voice replies “not yet, but you will be unless you come with us.” Loki sits up to see three very different Loki variants in what appears to be a post-apocalyptic New York staring down at him. 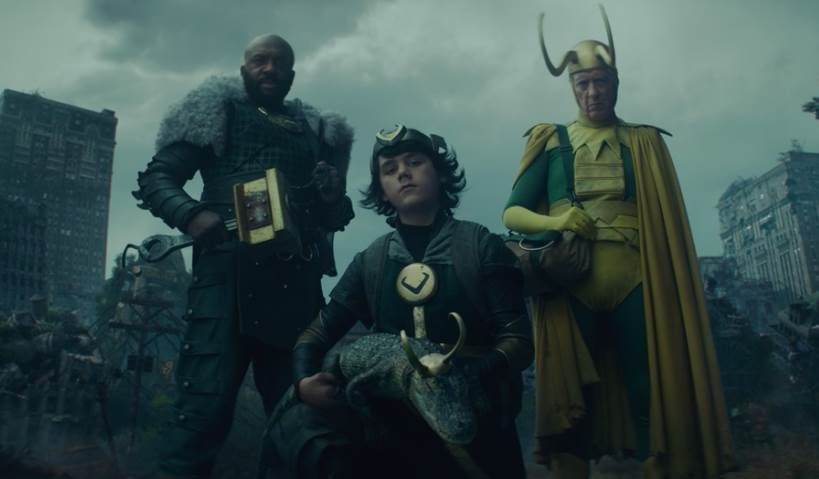 This show has been wild and unpredictable up to this point and yet this episode still managed to turn those qualities up a notch. Most viewers certainly would not have predicted the apparent deaths of two of the main characters. Nor would they have predicted even seeing the Timekeepers this early, nevermind them not being real. And the cherry on top is of course these three new Loki variants. It’s these kinds of twists and turns that keep the audience on the edge of their seats and wondering what’s going to come next. This is an episode that will have everyone talking until we get another next week.