Gabby Duran’s jealous side comes out in “Mimi from Miami,” the newest episode of Gabby Duran and the Unsittables that just debuted on Disney Channel and DisneyNow. It’s Gabby’s birthday and she’s excited to not have to share this one with her best friend. But when her mom pulls out a special surprise, Gabby thinks her special day is ruined. Here’s a full recap. 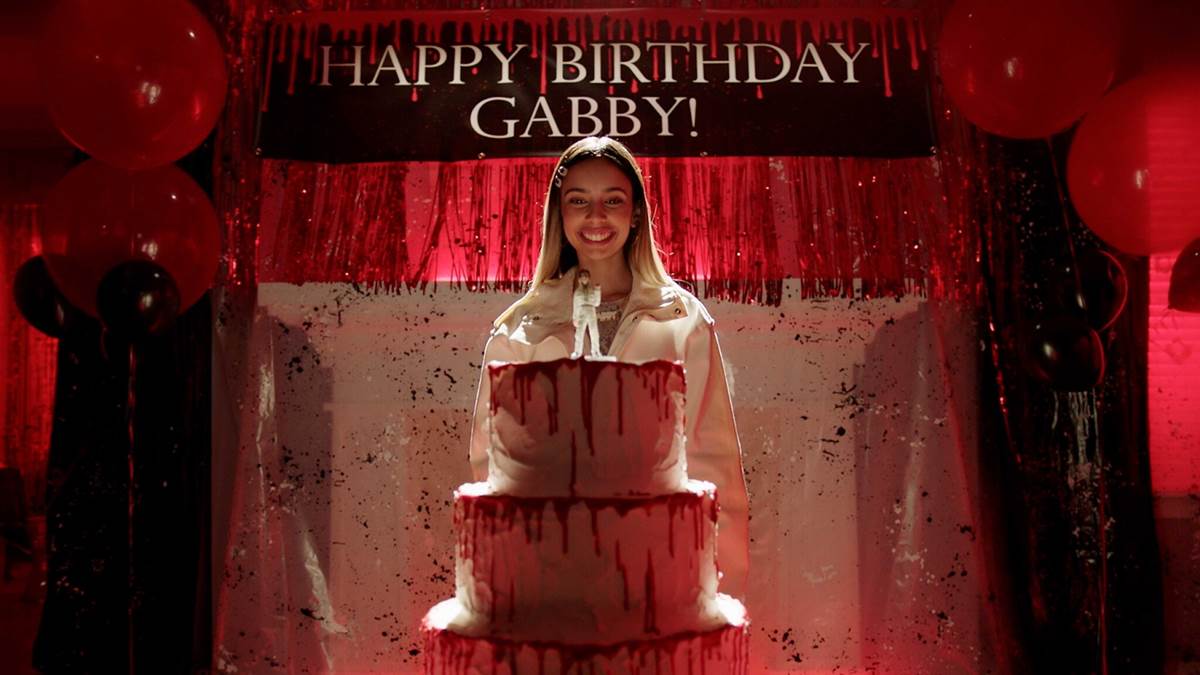 Gabby is in her room on a video call with her best friend Mimi, who lives in Miami. Gabby gives Mimi a hard time for going to their favorite restaurant without her and then they congratulate each other on their upcoming birthdays, establishing that they are “Birthday twins.” They both act sad that they won’t get to spend this birthday together. Ending the call, Gabby examines her party invitations for her “Bloodbath” themed party, which squirts fake blood when they’re opened.

At Luchachos, Gabby tells Wes about her friendship with Mimi and how because they share a birthday, the first year they had parties on the same day and time, nobody from school showed up to either to avoid hurting anyone’s feelings. The next year, their moms decided to host a joint party and it’s been that way ever since. Gabby says she feels like her special day is always taken from her by her best friend, who one-ups everything she does. Wes asks her why she never told Mimi how she feels and Gabby explains that they are “No drama mamas.”

Principal Swift and Jeremy received their invitation to Gabby’s party, fake blood all over their faces. They see the phrase “RSVP” and get confused, not knowing what it means. Jeremy thinks it’s too much work to figure it out, but when Swift tells him there will be food with little toothpicks in it, he changes his mind. They wander off to try and solve the mystery as Orb tells them the real meaning of RSVP, which neither of them hear (It means répondez s'il vous plaît, French for "Please respond.")

Dina and Olivia have worked really hard on Gabby’s party, with Oliia personally making the pinata and Dina spending more than $200 in decorations. They wonder if they’ll finally get a thank you from Gabby this year. Dina thinks they will, but Olivia doubts it.

Wes is the first to arrive for Gabby’s party, the house looking like a scene from a horror movie. Wes asks Gabby who decorated and she says “Who cares?” as she dreams about impressing her guests when she breaks the pinata, plays a mix CD she made, and hacks into her birthday cake with a hatchet. The doorbell rings and Gabby thinks it’s the first party guest, but to her horror, it’s Mimi. Her best friend from Miami gives Gabby a hug as Gabby unenthusiastically says “Yay.”

Mimi gives Gabby a giant bag with a present inside, but Gabby tells her she didn’t get her a present because she didn’t know she was coming. Dina comes downstairs and reveals that she paid to fly Mimi out so they wouldn’t miss a birthday together. Dina expects to hear a “Thank you,” which doesn’t come. Gabby feels comfort that at least Mimi isn’t dressed up, but she tears away her hoodie to reveal a silver party dress. She also pulls out a cake topper of herself and adds it to the cake. It’s a lot bigger than Gabby’s cake topper.

Using a markerboard, Principal Swift and Jeremy have written down every possible combination of English words that RSVP could mean. Swift thinks they will have to do all of them and Orb announces that the party has started and lasts two hours, giving them a tight deadline.

Gabby watches with jealousy as Mimi mingles with her friends and appears instantly popular with them. Wes tells Gabby that she should just tell Mimi how she feels, but she repeats that they are “No drama mamas.” It’s pinata time and Gabby’s whacks aren’t working. Mimi asks for a turn and gets on a table, body slamming the pinata to the ground and bursting it open to the applause of the party guests.

Among the items Swift and Jeremy try are “Rupture Swift’s Volcanic Pimple,” “Ridicule Someone Very Precious,” “Ride Super Vain Pony,” and “Record Song Vocals Professionally.” At the end of the montage, Swift has crossed out all of the items on the markerboard and he and Jeremy feel that they can now go to the party.

Gabby brings out her mix CD when the doorbell rings and Mimi opens it, bringing in DJ Candy Bean (like Marshmello) from Miami and one-upping Gabby. To try and get the attention back, Gabby does a cool dance and Mimi looks upset. Wes tells Mimi that it looks like Gabby stole the spotlight and she acts like it doesn’t bother her.

When the guests sing the “Happy Birthday Song” and they get to the name part, it sounds like most of them sing Mimi’s name instead of Gabby’s. It becomes a competition as Gabby and Mimi blow out the candles and when Dina offers the hatchett, the girls both race for it and Mimi wins. Gabby has an outburst of emotions, telling Mimi that this was supposed to be her special day and her party. Gabby grabs Mimi’s cake topper off the cake and bites the head off, spitting it out. One of the guests says that Gabby is running Mimi’s party. Mimi grabs the cake and runs out of the house.

Principal Swift and Jeremy arrive just as Gabby runs out of the door to chase after Mimi. They proudly boast that they did the RSVP and as Gabby runs down the street, she yells back that they haven’t RSVP’d. It’s easy for Gabby to follow Mimi because the cake is leaking a trail of red frosting. Gabby catches up to Mimi, who tells her that she’s going back to Miami and taking the cake with her. Gabby grabs the cake board and they begin a tug-of-war over it.

Back at Gabby’s house, Principal Swift and Jeremy sit on the porch confused. Jeremy mentions the food with tiny toothpicks and Swift tells him he lied about them to make Jeremy want to come. A boy from the party is also sitting with them, who realized that Gabby’s name has two “B”’s because of the banner at the party, telling them he “Realized Something Very Profound.” Those words create the acronym RSVP and Swift and Jeremy think that’s what they needed to do, claiming that as a realization of something profound and getting up to go into the party. They exit quickly, saying it was “Dead” inside.

While Gabby and Mimi fight, the cake drops and bounces, but stays intact. They breathe a sigh of relief, but then it explodes, covering both of them in blood-red frosting. They laugh about it and Gabby confesses to Mimi that she wants to have her own birthday parties going forward. It turns out that Mimi felt the same way and they hug it out, agreeing to never see each other on their birthdays again.

That night, Gabby and Mimi hang out in her room and Mimi brought Miami to her in the form of inflatable palm trees, beach chairs, and shirts that say “I heart Miami,” all though Gabby points out that they left out the “I” in Miami, so the shirt’s actually say Mimi. Gabby gets up, remembering she has to do something. She goes downstairs to thank her mom and sister for putting so much time and effort into her party, but as the camera zooms back, we see that they’re both sound asleep on the couch and don’t hear her.

Gabby Duran and the Unsittables will return on Friday, July 9th with a new episode called “The Mile.” Here’s the full episode description from Disney Channel:

With the Congressional Fitness Test coming up, Gabby dreads her least favorite physical activity—running! She devises a plan to get out of it that causes mayhem for Swift.