On Wednesday, July 7th, Disney+ invites audiences back to Monstropolis in Monsters at Work, a new original series that picks up right where Monsters, Inc. left off. At a recent event to celebrate the show’s launch at Lemonade, where restaurants were transformed into the Monsters, Inc. Laffateria, I had the opportunity to sit down with producer Bobs Gannaway, who also developed the series. His list of Disney Television Animation projects is huge and includes Timon & Pumbaa, Mickey Mouse Works, House of Mouse, Lilo & Stitch: The Series, plus the DisneyToon Studios Planes film series. I asked Bobs about the origins of Monsters at Work, Easter Eggs fans should be on the lookout for, and getting the original voice actors to return for this project. 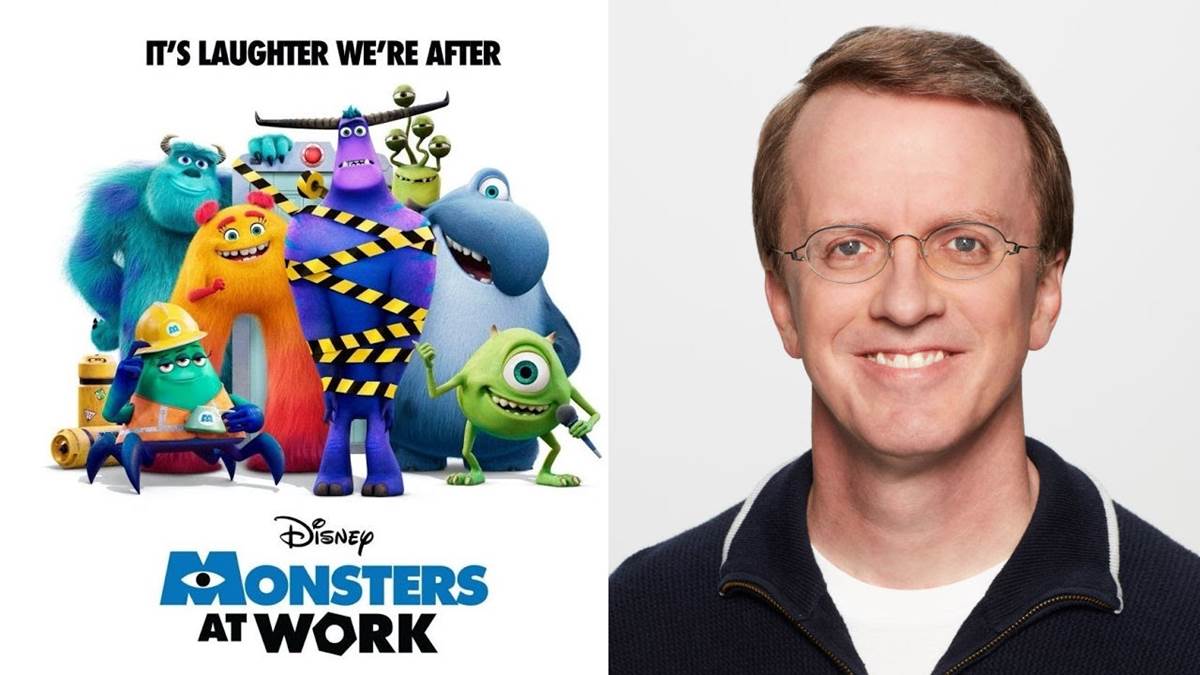 Alex: You've worked on a lot of Disney Television Animation projects that take a well-established property and further expand the story. I'm curious to know how long was Monsters at Work or some kind of a Monsters, Inc. television project in development. How long did it take for it to get to this point?

Bobs Gannaway: Well, I've been working on this show for three and a half years. As you likely know, animation has a long lead time. But I was asked by Disney Television to come in and develop a show based on Monsters, Inc. and it took a long time. Like I said, it took a long time to get to the very simple idea we landed on, which was a character who, Sully was his idol and went to Monsters University School of Scaring, dreamed of becoming a scarer. The day that Monsters, Inc. switches to laugh power is the day he was going to go become a scarer on a scare floor. And now the world has thrown a curve ball and he has to navigate this new world. That took about a year for us just to come up with that simple idea. We explored a whole lot of Monstropolis and all other areas trying to find our characters.

Alex: You mentioned Monsters University. You guys have definitely brought in elements from both of the Monsters films. How difficult was it to replicate the look and the characters that we've already known from the series and bring them over? Did you have the ability to upload from Pixar's computer archives, or did it all have to be recreated from scratch?

Bobs Gannaway: Well, my joke is I think it's all on floppy disks, the stuff from Pixar, because it was twenty-years ago. Fortunately, the limitations they had back then worked to our benefit because we are able to, we think, get very close to the look of Monsters, Inc. They had challenges of groom on Sully, and of course, sim on cloth, and other elements like foliage. They had all those challenges. We had the same challenges, but doing it for a series, a little bit more screen time. But, it was very important to us to make sure you're going back to Monsters, Inc. and that it looks like it and feels like it and sounds like it. And a lot of that hopefully is invisible to the audience from matching the camera work, the lens choices on the camera, to the lighting, and obviously the color, and doing our best with the animation. I'm super proud of the crew and what they've been able to accomplish.

Alex: You were also able to get some pretty big names to come back from the original films, some of whom are not usually known for doing TV or even animation. What was it like bringing in Billy Crystal, John Goodman, Jennifer Tilly, Bonnie Hunt, all these easily recognizable names back to the Monsters world?

Bobs Gannaway: It's been my experience that most of the actors, if not all the actors, who create a character for Disney feel great ownership of that character. And if you ask them to come and do more of that character, they often, given their availability, will do it. So, we didn't have to twist anybody's arm. Billy Crystal, John Goodman, Bonnie Hunt, all wonderful, talented people, excited to put themselves back in those characters and really own them. For us, I'm asking you as a viewer to come spend time with your old friends. It better look like them and sound like them, or honestly, it's not them. So, I'm super pleased that everybody came back. I will say this, Dan Gerson, who did the voice of Smitty and Needleman, passed away. So, at first I was considering not having Smitty and Needleman in the series out of respect for Dan. But, like any good characters, they would not allow themselves to not be in the show. When you create great characters like Pixar has done, they have their own voices and their own wants, and you're just there to service them. So, we did bring back Smitty and Needleman being voiced by Stephen Stanton. And we did a little tip of the hat to Dan, because if you look on Smitty and Needleman's trash can, now there's a little sticker on it that says "Gerson Industries". So, we did that as a little tip of the hat to Dan.

Bobs Gannaway: There's a few things we did that were by design, one is the code system. The code system has a logic behind it. Some people know what it is. If you don't, you're going to have to figure it out. So, the codes do have relevance. We worked very hard with an artist named Marty Baumann, who did all of our graphics, to make sure the world was filled with graphics. We live in a world, there's a lot of signs on the street and signs on buildings and signs on a bulletin board at work. So we wanted to make sure and populate the world with those things. So Marty worked with us and like any good animated film, if there's a newspaper, the entire article is written. I don't know if you can zoom in and see the whole article. So keep an eye on all of the signage because that is very world expansion… Keep an eye on Roze's "Daily Glob,” keep an eye on that newspaper, there might be something there… Something that I was really excited to do was the credits. There's a different version of Randy Newman's theme at the end of each episode. We do a different arrangement by Dominic Lewis of the Monster's Inc. theme because I felt it's important to entertain the audience all the way until the end. I want to reward people who sit through the credits. So, not only do you get to hear a different arrangement of the Monster's Inc. theme, of Randy Newman's theme, but we always put a little dialogue cap at the very end. So, if you stay until the very end, one of the characters is going to pop in and say something

Alex: I waited through the end of the second episode to see if it was the same or if it was going to be different.

Bobs Gannaway: Originally, I had created a thing called "Mike's Comedy Class,” which was a little self-contained short and I wanted to put that after the credits. But everyone liked them so much they didn't want people to miss them, so we bumped that up. That was originally going to be my closing credit reward, but they were just too good. And they had to actually bump them up into the content of the show.

Alex: From a storytelling perspective, Monsters at Work was designed for streaming rather than broadcast, which gets rid of the 21-minute time constraint. Did that open up  new opportunities for this introductory season?

You can stream the first two episodes of Monsters at Work when the series premieres on July 7th on Disney+.