In the current era of Star Wars content creation with numerous comic book lines, live-action and animated tv series, nearly annual film releases, a new portion of the timeline being explored in all of those media and even entire sections of Disney theme parks dedicated to the universe George Lucas crafted, it is hard to imagine the Star Wars content desert in play eight years after Return of the Jedi finished playing in theaters. Picking up the recent reprint of Star Wars: Heir to the Empire — this edition featuring a golden “the Essential Legends Collection” banner — carried me back to that very different era of Star Wars fandom. I can still recall the excitement when this book first appeared on shelves in 1991 and its success sparked a collection of Star Wars novels that helped fill the void until 1994’s announcement that Lucas was working on prequel scripts. And while many of those titles have been relegated to “Legends” or non-canon status, the impressive military strategist Grand Admiral Thrawn introduced in this series has continued to appear in various ways including as a name drop in the recent season of the highly popular Disney+ series The Mandalorian. 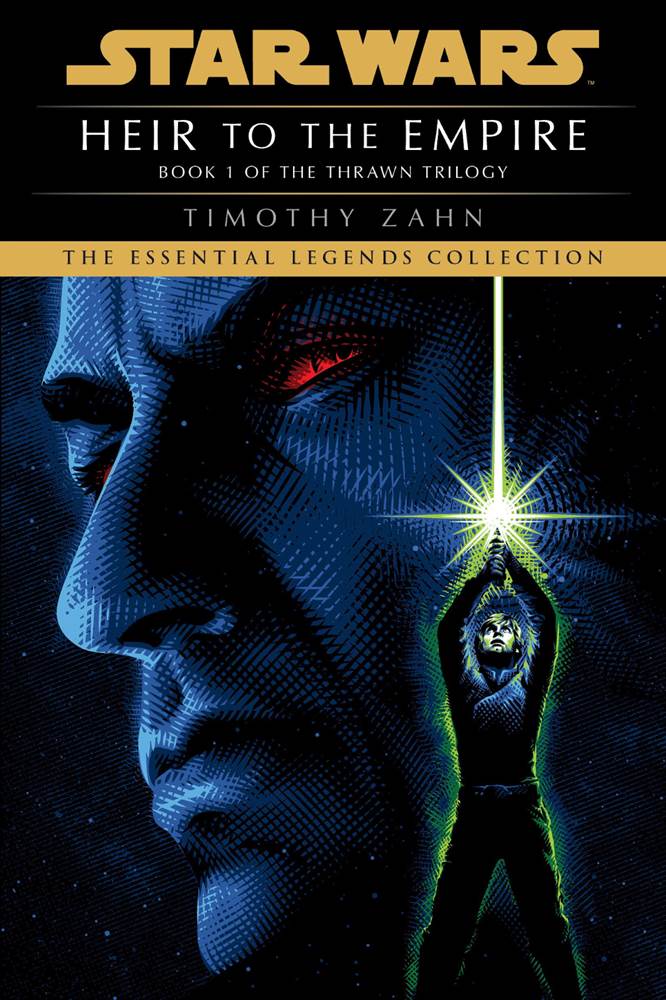 Given that Heir to the Empire appeared in an era of very little new content and introduced the popular Thrawn, I had wondered if this artificially inflated the title’s status, but was pleasantly surprised to discover that the book did indeed deserve its strong reputation. Set in the period five years after the events of Return of the Jedi, author Timothy Zahn beautifully captures the characters we fell in love with on screen. I could hear the voices of Mark Hamill, Harrison Ford, Billy Dee Williams, Carrie Fisher, etc. as I read conversations between Luke, Han, Lando or Leia. We encounter a pregnant Leia trying to help the still young and seemingly fragile New Republic, and soon to be dad Han supporting her, yet pushing for her safety and the safety of their not yet born twins. It's fun to discover Lando’s current operation and to once again have him team up with Solo and share a little bit more of their scoundrel days.

But it was Zahn’s portrayal of Luke and the exploration of his Jedi journey that most interested me. In this first novel of the series Luke, while masterful in ways of the Jedi as he demonstrated when he freed Han from Jabba, is still very much in the process and unsettled. He struggles to understand mysterious visions and unknown voices reaching out and questions whether he can successfully mentor Leia. Flashes of wisdom from Ben or Yoda replay for him and he ponders if he is properly applying the lesson. And while in an environment that suppresses his connection to the Force he encounters Mara Jade, a female driven to kill him for reasons we discover along the way. For more about that aspect, you can read Mike Celestino’s full recap of the title from its 20th anniversary release.

While I read a few of the Star Wars titles throughout the era, Zahn’s Thrawn trilogy sat unread on my shelves due to the opening chapter’s bridge discussions and military strategy. Thrawn, while a deeply fascinating, brilliant strategist, is simply not the type of character to catch my interest. I was reminded of this when I first started the title for this assignment. However I found the audiobook by Mark Thompson with score and sound effects overcame my waning focus in  those portions. It also afforded me the delightful interpretation of the Talon Karrde with a vocal pattern reminiscent of Ricardo Montalban. Thankfully the Kindle makes it easy to swap back and forth between the audiobook and the text.

With Thrawn’s arrival at the Toydarian Toymaker on Batuu and his reference in The Mandalorian it was fun to revisit his introduction to Star Wars fans. The other titles of the trilogy Dark Force Rising and The Last Command reprinted under the new “Essential Legends Collection” banner will hit shelves September 7th.