Gabby Duran learns that sometimes you have to do things you don’t like in “The Mile,” a new episode of Gabby Duran and the Unsittables that premiered on Friday, July 9th. It all starts when Gabby shows up twenty-minutes late for class and fails to do the homework. The teacher is already upset with her, but when her cell phone rings, he sends her to Principal Principal Swift’s office, where he and Gabby have a “Jam session” eating jams on toasted english muffins. 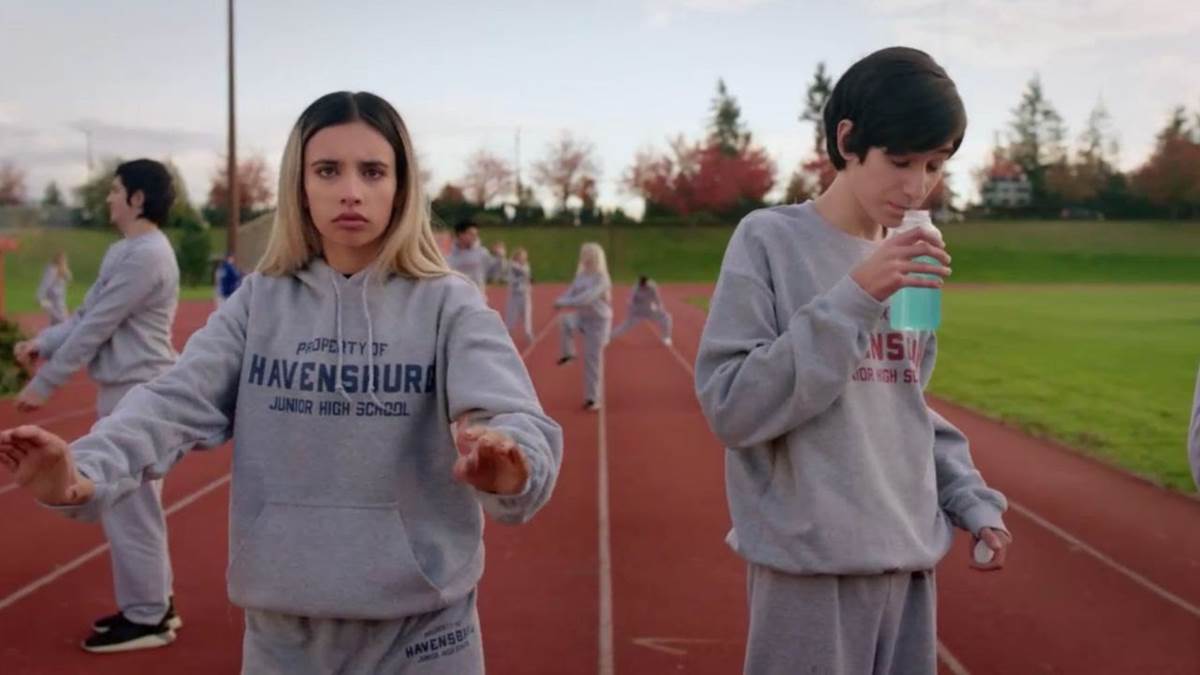 Finding Wes in the hallway, Gabby shows him a flier for the Congressional Fitness Test and she’s upset because they’ve added a new activity this year: running a mile. Wes looks forward to the test every year because he’s great at the “Sit and reach.” Gabby remembers that she and Swift are friends and thinks he will let her out of it, but in the next scene, he tells her no. Swift believes the Congressional Fitness Test is prestigious and declares that the “Sit and reach” is the king of exercises.

Meanwhile, Olivia asks Jeremy for help in getting over her stage fright so she can participate in the Havensburg Geography Bee. Her mother won the bee when she was a kid and Olivia feels pressure to win a trophy, too. Jeremy is reluctant, but Olivia convinces him by promising to give him the grand prize, a gift certificate to an island-themed restaurant called “Tropics.”

Gabby finds herself back in Swift’s office the next day because she edited together soundbites to make it sound like he was excusing Gabby from the test, but the gym teacher shared it with him. Swift tells Gabby that he will forgive her if she takes the test, but she says no. “Then the jam-bronies are no more,” he tells her, bringing their “Jam sessions” to an end. While babysitting Fritz that night, Gabby vents to the furry little android maker as she plays with a robotic arm.

Principal Swift has taken over for the gym teacher to personally oversee that every student is prepared for the Congressional Fitness Test. He sees Gabby with a neck brace on and tells her he knows it’s fake. During a montage, Wes achieves a new personal best on the sit and reach.

The next day is the real test and Wes tells Gabby that he’s proud of her. His phone rings and he sees that it’s Gabby calling. Answering, he learns that the Gabby Duran in front of him is an android built by Fritz, who is sitting inside the head.

Jeremy uses hologram people for Olivia to help her overcome her stage fright, but when the holograms start heckling, Olivia freaks out and curls into a ball on the ground. Taking a lunch break at Luchachos, Olivia remembers that when she was five, she created an alter ego named Barbara who was braver than her and from Australia. She switches into Barbara and is suddenly loud and brash, she and Jeremy both getting asked to leave when they loudly insult Luchachos.

The Gabby Bot is doing really well at all the tests and it’s now time for the mile. Gabby, communicating with Fritz from his basement, tells him to have the Gabby Bot do a happy dance and it bumps into another student with an energy drink, which spills on the Gabby Bot and it short circuits. As Swift blows the whistle to start the mile run, the Gabby Bot reboots and enters into a new command that Fritz can’t stop: “Break a Jam-Broni.” The Gabby Bot heads towards Principal Swift and throws him across the field.

Wes tries to come to Swift’s rescue, but he pulls a hamstring from reaching too far. Fritz tells Gabby that there’s a device she needs to bring him from the basement so he can power down the Gabby bot. Gabby grabs it and has to run to the school, finding Swift cornered in his office by the Gabby Bot. When she gets there, Gabby confesses that she had to run over a mile to get there. The Gabby Bot sees the button in Gabby’s hands and grabs it, destroying it before it can be used. Thinking quickly, Gabby grabs the Gabby Bot’s hand and puts it in the toaster, creating an electric current that powers the Gabby Bot down (and shocks Swift in the process). Fritz climbs out of the Gabby Bot and he’s fine.

Dina watches proudly as Olivia takes the stage at the Havensburg Geography Bee, with Jeremy sitting next to her. When the moderator calls Olivia, who is wearing a kangaroo lapel pin, she corrects him that her name is Barbara. She gets the first question wrong and gets upset, becoming aggressive with the moderator. Afterwards, Olivia apologizes to her mom, who confesses that she had an alter ego when she was a kid, too (Masha from Moscow). Jeremy asks if they can go eat at an island themed restaurant.

The next day, Gabby apologizes to Principal Swift, telling him that she got so used to being friends that she has a hard time when he put his foot down. Gabby will do a make up test and they make up, pulling out the jams.

Gabby Duran and the Unsittables will return on Friday, July 16th, with another new episode called “Dude, Where’s My House?” Here’s the official episode description from Disney Channel:

When Gabby leaves Jeremy unattended during a babysitting job, she finds he has lost Swift’s house in a bet with Jimbuk. Together, they must retrieve the house before Swift returns.