In easily the most Monsters, Inc. episode of Monsters at Work thus far, we see Tylor and MIFT repair a damaged room while Mike and Sulley have to babysit a human child in Monstropolis while the work is being done. 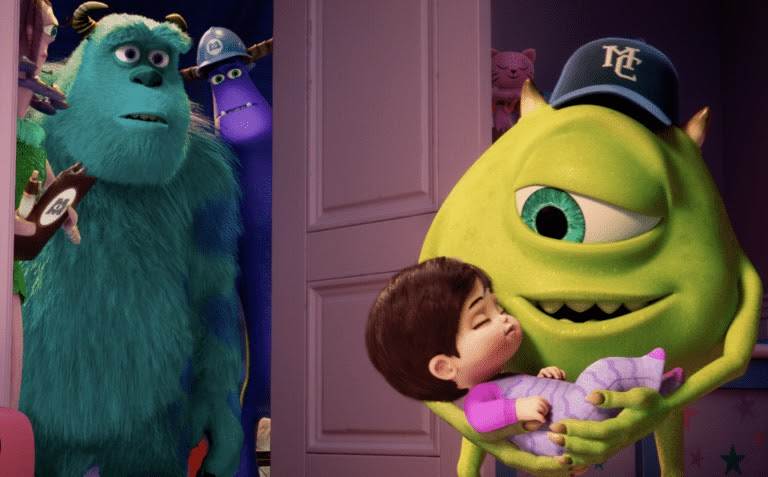 Phlegm is going to the room of one of Monsters Inc.’s top gigglers, but he has a cold today. Laying his props out to ensure the human child gives the laughs he needs to collect to power Monstropolis, he tries to hold back a sneeze to no avail, blasting his acidic snot all over a wall while stumbling over all the toys he left out to make the child giggle. When he finally regains composure, he realizes his snot is now eating a hole through the bedroom wall, and alerts Maria and Celia to the newly damaged room.

Celia evacuates the floor and calls MIFT to come in and repair the room.

Down at MIFT, Fritz is playing paper football with himself while Val tries to reminisce with Tylor about their M.U. experience, to which Tylor has no recollection. The order for a 418 (a damaged room) shows up, and Duncan volunteers to go take care of it, but Fritz tells him to take Tylor too. Duncan refuses, so Fritz sends Val with Tylor instead. Cutter too.

They group goes in and examines the damage to the room and realize they cannot fix the room with the baby still there. Mike gives a few callbacks to the original film, initially hesitant to bring yet another human child into Monstropolis but gives in, placing the “thing” in a mop bucket turned rolling bassinet.

The MIFT team goes back to repair the room with Val still reminiscing on different events that happened to her at M.U. with Tylor, who still doesn’t remember any of this.  As they are fixing the room, Duncan appears as well, saying that as deputy supervisor, he must watch and observe the rest of his subordinates, and takes a seat in the room to watch the rest of the group.

Back at Mike’s office, Sulley not only realizes that Mike is beginning to get attached to little “snore,” and also tells him he got tickets to a Monstropolis Creepees baseball game. Familiar hijinks ensue as Mike once again dresses a small child to look like a monster and they head to the baseball game (with sports commentary by Bob Yuck-er) .

In the child’s room, Duncan reminds the rest of the MIFTers that they are running out of time when Cutter realizes it’s time for her union regulated lunch break and heads out. Tylor, upset he can’t go to comedy class disappointedly kicks a soccer ball out of the door as Cutter leaves, which bounces around the Laugh Floor, knocking into the keypad and deactivating the door. This goes unnoticed until they start cleaning up their repairs and Tylor fumbles around like a klutz and wakes the parents, but the gang cannot leave so they hide amongst the toys, and even convince the parents that Duncan is their baby, who just happens to be learning her first words (in full sentences, no less!)

Mike and Sulley are at the baseball game, trying to keep the baby from waking but conflict ensues with a rowdy fan, and other little mishaps including feeding her a rot-dog and a dirty diaper. Either way, we can tell easily Mike is way more attached to the child than he is letting on.

While Tylor and Val are trapped in the room, he had finally had enough and said he doesn’t remember any of the things she’s talking about and Val is devastated and says she remembers him because nobody else noticed her, and then one day in class he showed up next to her and asked if that seat was taken.

Cutter returns from her union lunch break and realizes the door had been deactivated, powering it back on and saving her friends. At the same time, Mike and Sulley return from the baseball game, and are ready to put Snore back in her crib. Mike, now having to say goodbye to the child (not nearly as heartbreaking as Sulley and Boo years ago). He sings her a song which loosely channels “Put that thing back where it came from or so help me” but in the exact opposite tone, called “I’m Not Going to Sing You A Song.” As he is singing, he lays Snore down in her crib and tucks her in with the baseball from the game and then exits the room.

Mission accomplished. The room has been repaired, the door doesn’t need to be shredded, and the Laugh Floor can reopen. This also makes me wonder if we’ll see Mike go back to Snore at some point.

Tylor confesses that he does remember his first encounter with Val, reminiscing that she shared her candy with him because it was his favorite kind of candy. Val then says they can start stealing that candy from Duncan because she knows his hiding spot, and the friendship seems to not only be repaired, but will perhaps grow stronger as we continue the series.

As was the case with the last episode, we got a look into another session of Mike’s Comedy Class, where he is demonstrating the proper use of a Whoopie Cushion. After inflating, we see Mike try and figure out what to do next, staring at the lifeless device, and going back to the instruction manual before he sits on it, releasing the flatulent air noise. Yes it’s still funny for humans watching the show, but the reaction of one monster in the class is what makes the moment truly great.

The end credits roll with a reprise of the Monster’s Inc. theme, but this time with instruments and sounds like those of a baseball game organ, fitting considering a good portion of the episode took place at a baseball game.

This episode of Monsters at Work, as well as the first two episodes of the series are now streaming on Disney+.