In this second episode, titled “Finders Keepers,” Abby looks into the history of the goal keeper. This leads us down a long road of soccer history that dates back long before even the invention of the soccer ball itself. It also takes us from the pitch to the rink as Abby explores hockey a little bit as well. Abby meets with Orlando Pride goal keeper Ashlyn Harris to explore the history of the position dating all the way back to the bronze age. At this time there was no keeper and no ball. Players instead tried to kick random objects through wholes in a cloth. Next, they upgraded the cloth and introduced the ball, but still no keepers. Eventually they worked their way up to including a keeper in front of a goal with no height limit. As Harris’ teammates fired shots well over her head, they realized why the crossbar was eventually introduced. The net was introduced in 1891 and soccer became soccer.

Abby then flies from Orlando to New Jersey to meet with NHL goalie Ilya Bryzgalov. Together they discuss the legendary keeper and goalie Lev Yashin. The two talk about the Russian soccer and hockey player and how he invented what the position of keeper is today, introducing moves like the punch and rushing the shooter.

After the history lesson, Abby actually suits up in full goalie gear to try and stop shots from Bryzgalov. After she struggles to get onto the ice, she gets in net and faces the hockey torture. After a few dozen shots, she does manage to stop one. Call it a successful experiment. 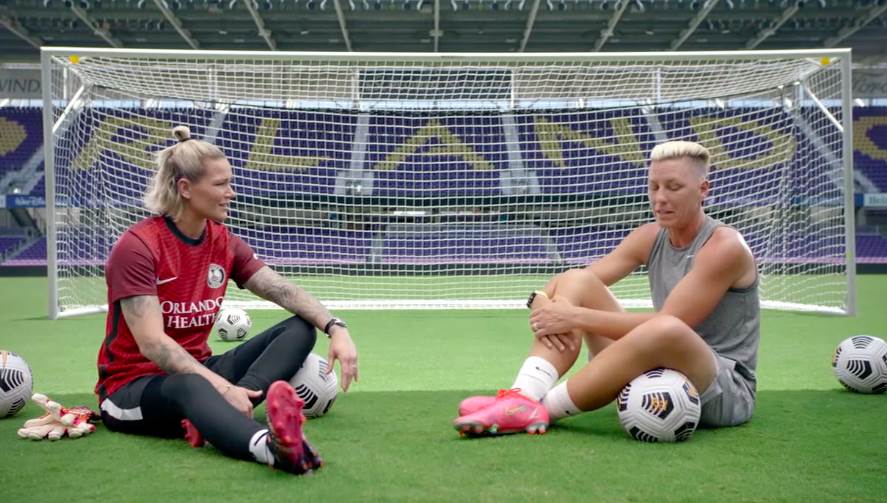 Abby then heads back to Orlando to meet with Harris again and discuss the psychology of a keeper. Harris credits a “loose screw” for wanting to be a keeper. Harris discusses filling the shoes of Hope Solo, who is considered to be one of the greatest keepers to ever play the game, for the US National Team.

Eventually, Wambach gets in the net as Harris walks her through all of the fundamentals of playing the position. She stops a shot from Harris and shows off some impressive punching skills. They also talk about penalty shots and show off some of Harris’ talents in net with a recent highlight.

Finally, the two discuss the pressure behind playing the position of keeper. And in order to allow Harris to blow off a little steam, Abby introduces her to the “rage cage,” where they… well, they smash stuff with sledge hammers. There’s not much soccer going on here, but it makes for a fun close to this episode.

Wambach is proving to be every bit the host that Peyton Manning is. This was another entertaining episode and you don’t need to be a soccer fan to enjoy it. Abby’s fun-loving attitude with her guests and the fascinating history lessons will make this series interesting to anyone who watches.