Change is happening on episode 5 of The Mysterious Benedict Society. Reynie and Sticky, (Mystic Inscho and Seth Carr) begin the show being fitted for their new Messenger uniforms. As they suit up for their new role, Mr. Curtain (Tony Hale) tells them that they should never underestimate the effects of a well-tailored outfit. While the boys are impressed by their accomplishment, they learn the truth about why they were promoted so quickly. Curtain tells them that Reynie’s aptitude was at the highest levels and Sticky’s loyalty to his friends in the previous cheating incident impressed Curtain. While Kate and Constance (Emmy DeOliveira and Marta Kessler) tease the two about their snazzy new uniforms, Reynie and Sticky start to see life at the Institute from a new lens. Now that they are Messengers, the boys get to sit at a special table with the other Messengers and start to pick up on the gossip of those in the know. They quickly learn that Jackson and Jillson (Ben Cockell and Katherine Evans) have spotted Mr. Benedict’s morse code signals coming from the shore and everyone is on high alert at the Institute. The kids inform Mr. Benedict (Tony Hale) that their lines of communication are compromised, and now the children are on their own with no help.

Distressed over losing communication with the kids, Mr. Benedict (Tony Hale), Rhonda (MaameYaa Boafo) and Number Two (Kristen Schaal) try to establish a new line of communication. An attempt to train a falcon goes awry when during a test at the camp the falcon destroys the straw dummy made to look like Reynie.

Ms. Perumal (Gia Sandhu) arrives at the camp and confronts Mr. Benedict and his group about Reynie, and soon learns about the operation that the children are involved in at the Institute. At the same time as Perumal is grilling Benedict, Reynie and Sticky are brought on official Messenger business to the tower where they meet Mr. Curtain in an isolated room with a special machine called ‘The Whisperer’.

Constance’s boredom at Kate’s tetherball practice gives her some free time to solve the riddle of Mr. Benedict’s last message. While the group was stumped about the meaning to the last morse code message, Constance deciphers the clues given by Benedict to determine the location of the secret entrance to the tower. Kate finds her later and is upset about her leaving the practice only to be thrilled by what Constance has discovered. Together they crack the code on how to open the secret entrance.

‘The Whisperer’ is very reassuring and comforting to Reynie and especially for Sticky. As Sticky sits back and converses with the machine, they come to an agreement that there is something reassuring about learning. With Mr. Curtain attached to the machine opposite the boys, they begin repeating various phrases that have no real meaning except that these phrases are subliminally broadcasting ‘The Emergency’. 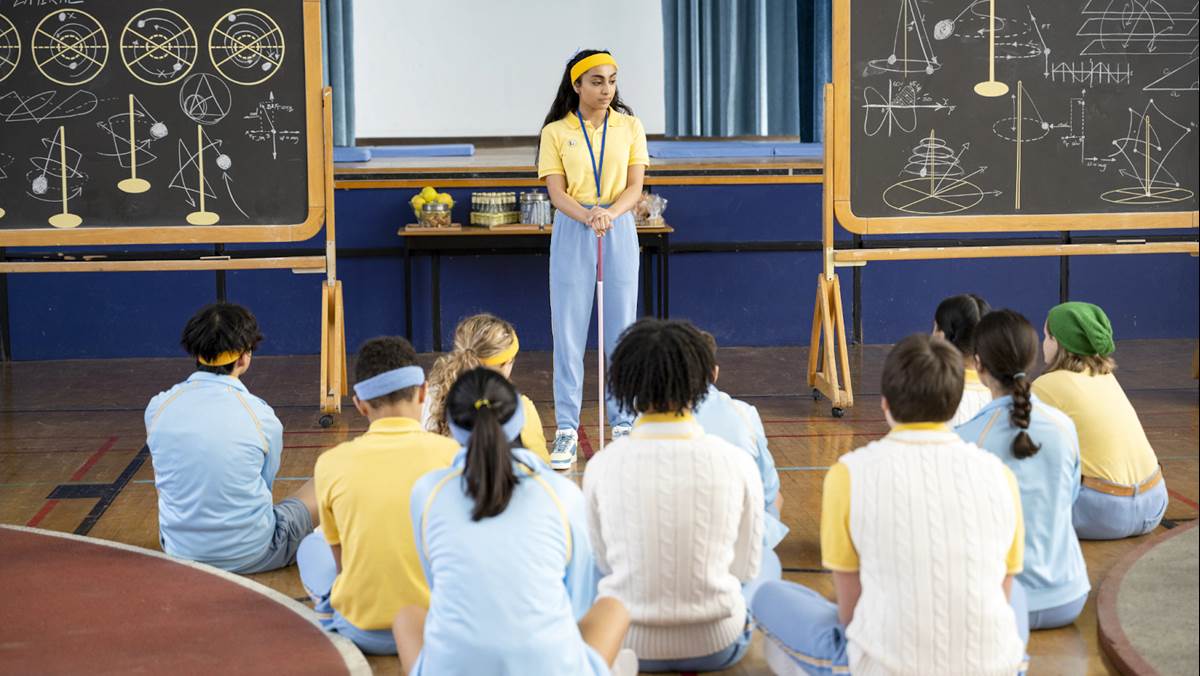 When the boys return from their duties, they meet with Constance and Kate and describe their experience. Sticky doesn’t see the harm they have done, while Reynie sees his work as helping to create ‘The Emergency’ for today. A plan starts to form amongst the kids, despite Sticky’s hesitance, to disable ‘The Whisperer’.

Plagued with doubt about the mission and fearing for the safety of the kids, Mr. Benedict announces to Rhonda, Number Two, and Milligan (Ryan Hurst) that they must gain access to the island and remove the children from the mission. Meanwhile, Curtain is ecstatic about the progress being made with ‘The Whisperer’ and plans to move ahead with his diabolical deeds. Ms. Perumal makes good on her threat to phone the authorities but when she does rather than connecting with the police, Perumal is directed to an automated message that offers no help at all.