Gabby Duran and Jeremy end up in a jam in “Dude, Where’s My House?” The newest episode of Disney Channel’s hit comedy series Gabby Duran and the Unsittables finds the two literally losing a house while Wes’ and Sky’s relationship becomes more serious. Here’s a recap of the latest episode. 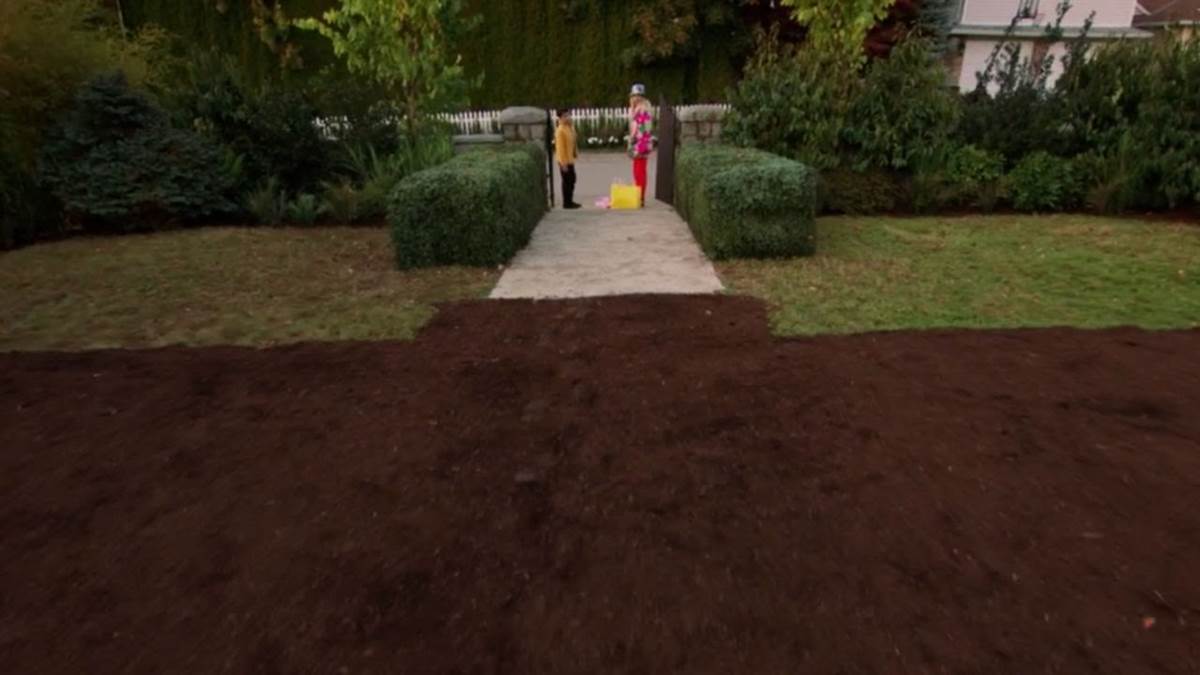 Gabby is babysitting Jeremy overnight for the first time and Principal Swift is nervous, quizzing Gabby about unlikely scenarios and how to handle them. He’s heading to the “Uncle Conference” where he hopes to learn how to be a better uncle to Jeremy. As Swift begins his emotional farewell on the porch, Jeremy slams the door in his face.

Despite telling Swift that she will be extra safe, Gabby has plans for she and Jeremy to eat a lot of Luchachos, mess with Orb, and make a megacity out of toys and then destroy it. But when Gabby gets an alert about a 90’s themed pop-up shop closeby, she wants Jeremy to go with her. He’s not interested and against her better judgement, Gabby tells herself that she will be back in no more than 20-minutes and nothing could go wrong in that time.

Gabby arrives back at Jeremy’s shortly after with four bags, wearing a new jacket and bucket hat. When she opens the gates, she finds Jeremy standing on an empty lot and she drops her bags. “So I kind of lost the house,” he tells her. Jeremy tells Gabby that one of his alien friends named Jimbuk came over and bet Jeremy that he couldn’t do 10 sit ups in a row. Because he lost the bet, Jimbuk shrunk the house and took it. Just then, Gabby’s phone rings and Swift asks her why she didn’t answer the house phone. She tells him everything is fine, despite the chaos she’s now found herself in. Gabby and Jeremy decide to go find Jimbuk to get the house back.

Wes is having his first dinner at Sky’s house and is about to meet her dad as Sky’s boyfriend. He’s very nervous and Sky helps him calm down. Wes’ first mishap comes when he opens the bottle of sparkling apple cider he brought, which sprays all over Sky’s dad. Sitting down, he lets out a loud fart and the chair he sits on breaks. He goes to the bathroom to coach himself, but when he sees toilet paper stuck to his shoe, he sits on the toilet to pull it off and the porcelain throne breaks under him. Sky opens the door with her dad right behind her and her dad is angry, telling Wes that they must now have a mind duel.

Gabby and Jeremy find Jimbuk in an alley and he asks for a list of impossible items as a trade for the house, including a milkshake of lost souls and ashes of a phoenix who hasn’t risen yet. Before Gabby can argue, Jimbuk disappears, so she and Jeremy apprehend him at his house where he’s using Swift’s home as a doll house. Gabby tackles Jimbuk to the floor and hits him with a magazine, but he yells at Jeremy, saying this wasn’t part of the plan. It turns out that Jeremy didn’t lose the house in a bet, but asked Timbuk to shrink it and take it away because he feels like Gabby only likes spending time with him when there’s a crazy alien adventure. Gabby tells him he’s actually one of the coolest kids she knows, but when Jimbuk gets up, he slips on the magazine and falls on the shrunken house, crushing it.

Swift calls Gabby again, sounding distressed this time. It turns out the “Uncle Convention” was actually the U.N.C.L.E. Convention, an acronym that means United Network of Cheetah and Leopard Enthusiasts. We see him surrounded by people dressed like wild cats, circling around him like prey. He tells Gabby that he’s coming home early and will be back in a few hours. Turning to Jeremy, Gabby shares her new plan: Order lots of food from Luchachos and fix the house.

After fixing the house, Gabby and Jeremy bring it to their vacant lot and set it down. Jeremy presses a button and nothing happens, but he tells her that Jimbuk told him it could take a minute to work. Just then, a Taxi pulls up and Swift gets out. Gabby runs to the street to distract him, asking lots of questions until the house expands back to regular size. She and Jeremy watch with interest as Swift walks up to the house and enters.

Wes and Sky’s dad put on metal helmets for the mind duel and Sky helps him calm down again, but Wes notices that she is acting differently than she did when they first got to her house. Sky’s dad tells Wes that if he wins, he gets to use Wes’ bones to fix his toilet, but if Wes wins, he can keep seeing Sky. The duel begins and Wes and Sky’s father are suddenly in cosmic space standing on opposing platform’s. An ugly monster hologram emerges out of Sky’s dad’s helmet and Wes thinks of his own creature to battle it, conjuring an image of Sky’s dad. Wes tells him that he chose an alien telepath dad who could make a dinner appear to go horribly wrong, even if it’s just in that person’s head. Sky’s dad asks Wes how he figured it out and he tells him that Sky has been acting differently towards him since he got there. Sky’s dad is impressed and gives Wes his blessing to date his daughter, asking him not to tell Sky. Cut to Wes at the door shaking Sky’s dad’s hand, the entire event took place in a matter of seconds.

Back in Swift’s house, Gabby apologizes to Jeremy again for ditching him. Just then, Orb floats in the size of a fly asking for help. Gabby and Jeremy smile at each other, planning to mess with her using both a fly swatter and a vacuum.

Gabby Duran and the Unsittables will return on Friday, July 30th with a new episode called “A Song of Gabby & Susie.” Here’s the full episode description:

Gabby teams up with her bitter rival, Susie, to masquerade as best friends in order to win a contest to meet her favorite YA book author.