On Wednesday, July 28th, Disney+ subscribers will be treated to a brand-new take on the classic characters of Chip ‘n’ Dale in Chip ’n’ Dale: Park Life. From being best friends and Donald Duck’s smallest nemesi to becoming gumshoes who tackle cases big and small, audiences have generational history with these two characters. In advance of the launch of their brand-new series, I got to speak with series director Jean Cayrol about the new animated series and why it will be such a fun experience for kids and families to enjoy together. There’s also a brand-new advance clip from the show at the end of this interview. 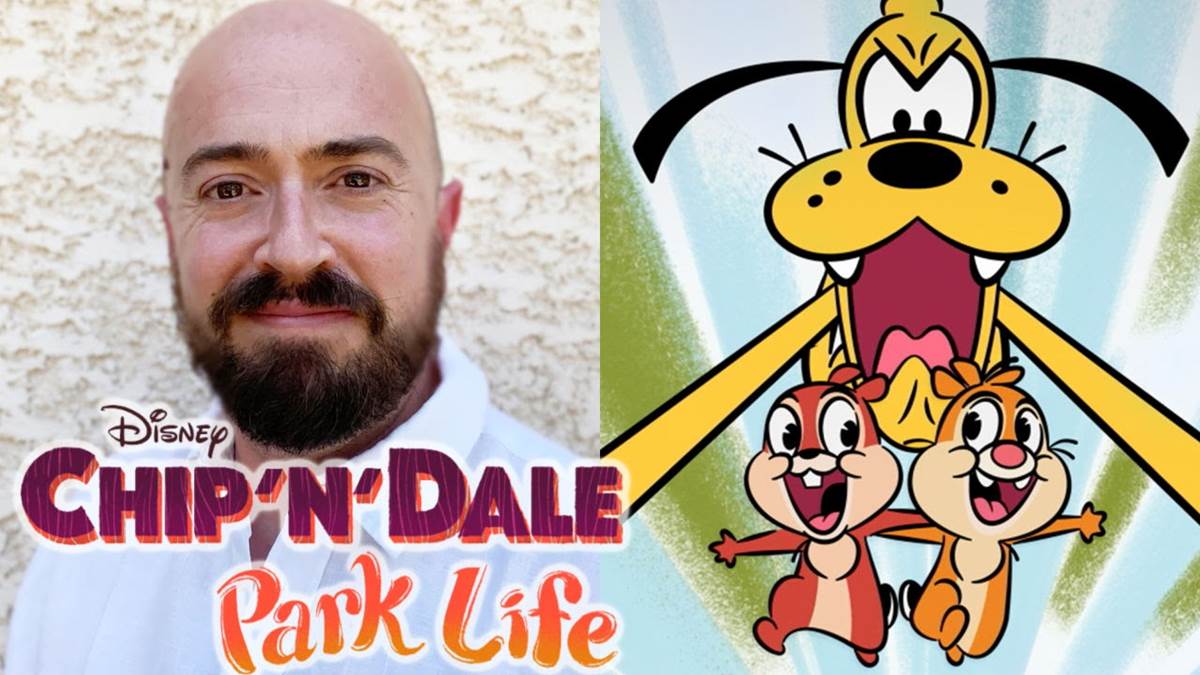 Benji: Chip ’n’ Dale: Park Life has a retro sensibility, like a classic Chip 'n' Dale short where they're very malleable characters, but it also has modern pacing and aesthetics. How did you discover what you wanted the show to be?

Jean Cayrol: Well, I guess there's two reasons for that, and thank you for that question, I think that's a great question. The first reason is that our version of Chip 'n' Dale, Chip 'n' Dale Park Life, is based on the old cartoon, a short animated Chip 'n' Dale, and we tried to keep as much as possible of that flavor, should I say. But we also wanted to make it as modern as possible. And we wanted Chip 'n' Dale Park Life to be set in the modern 21st century city. And the other reason for that is the show is completely 2D, hand-drawn animated. And from the very beginning, before I joined the project, Disney wanted to do a cartoon 2D comedy about Chip and Dale. And I'm working for Xilam Animation in Paris and we're doing pretty much only 2D cartoons and hand-drawn comedy. I learned the ancient way with paper and pencil and eraser, that kind of stuff. So, Disney asked us to do the show and I think that was a great choice to do a slapstick comedy. I mean, 2D is the way to go, I guess.

Benji: You mentioned that the series is animated in Paris and its destination is Disney+ where it will be enjoyed by an international audience. What opportunities did this international production present, knowing that the final audience would be very diverse?

Jean Cayrol: This was my first time working with Disney. Well, not really… We did a preschool show before that with Xilam and Disney, but the involvement was different and we were not talking about heritage characters, but we are now. It's a big responsibility to bring these two little guys on new adventures in a new series. I had a fabulous collaboration with Disney UK. They're very, very supportive and that kind of collaboration was very new to me because we used to work pretty much in our small space, small corner. It's a French show or it's a Spanish show, but for Chip 'n' Dale, we all know the little guys, we all love them. And when we share a connection, I mean Chip 'n' Dale are really a connection between us, really. So we worked closely together and the collaboration was great. They were really supportive. And with these needs, the scenes that they try first to understand what you want to do, and then they push you as far as possible in that direction. And that's great for the director. It is super important and it's great to have someone be able to say to you, ‘It's good, but I know you can do better than that. Dig deeper and deeper into what you really want to do.’ And that for me is the string of Chip 'n' Dale is the collaboration between Disney and Xilam Animation in Paris. So I guess people will have a sense of that in the show.

Benji: You dug deep into the Disney canon to introduce some really fun cameos for fans. Did you have a favorite character that you got in there?

Jean Cayrol: I do have a favorite. I don't know if I can talk about that, but if you look closely at the opening, you'll get some hints about who's in the show. I can say that I really, really enjoyed drawing a big yellow dog.

Benji: Speaking of the big yellow dog, there's some great moments with Pluto in the show. Did you get a chance to work with Disney Legend Bill Farmer, the voice of Pluto?

Jean Cayrol: Yes we did. Well when you're doing Pluto, how can you do that without Bill? Bill is thorough, right? So we had that chance. Of course, we all know what 2020 was, so I wasn't able to fly to LA to meet him, but so we were on Skype and that was great. The guy is just amazing, everything he does is insane. I mean, every take is excellent and the hard part of the job, I guess, is to choose between two or three excellent takes. Bill Farmer is great.

Benji: What do you hope fans take away from the show?

Jean Cayrol: What we really tried to do with Chip 'n' Dale Park Life is explore the real dynamic of Chip and Dale as a duo. Who they really are in private, answer all the questions I had when I was a kid watching the Chip 'n' Dale shorts. How do they really live? Why are they always eating acorns? Do they have a tiny sofa now? Those kinds of questions. So we tried to insert that, give them a real life in the treehouse, right? And I think a lot of people will find it appealing and will relate to their small domestic issues being two friends living together. Of course, you have to share some space and that's not easy every day. And I think also that every epic comedy cartoon situation will also appeal a lot to a younger audience. So Chip 'n' Dale really is a family show that you can share between generations. And I hope people will enjoy that as a family, as I do with my wife and daughter, when we watched some episodes.

Benji: Thank you so much, the show is a lot of fun. I remember talking to Bill Justice decades ago about what makes Chip 'n' Dale special and you guys really hit it on the head. Congratulations and I wish you much success.

Can’t wait for July 28th? Check out this advance clip from Chip ’n’ Dale: Park Life and don’t miss the premiere only on Disney+.