Tylor sees a chance to impress Mike during the Monsters, Inc Bowl-Off-A-Thon and uses it to try and fast-track himself into the role of Jokester on the Laugh Floor. 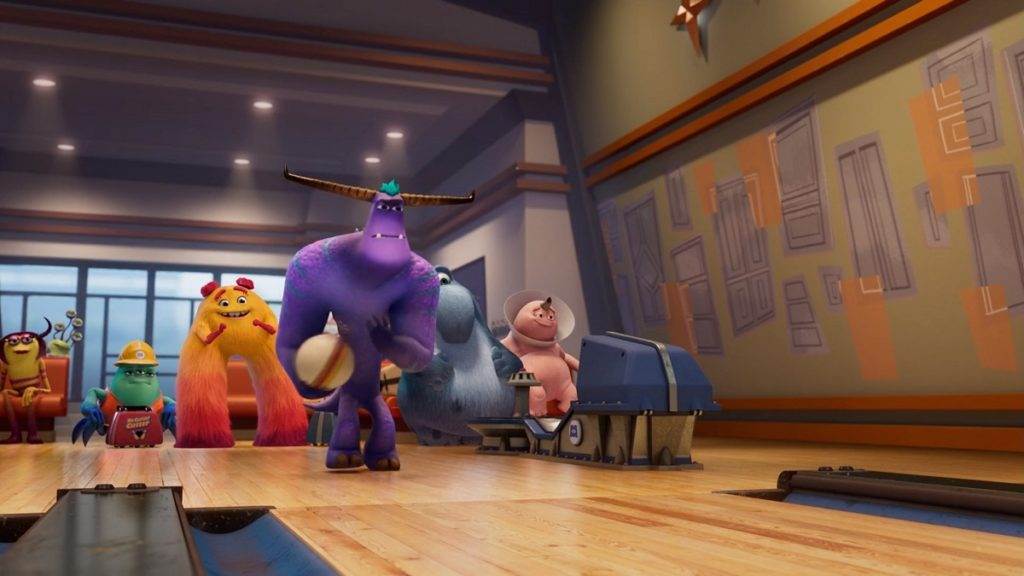 The Monsters, Inc Bowl-Off-A-Thon is coming up, and Mike can’t participate because he has to do all his paperwork, this time though, approving everyone’s since he is in charge now. Mike’s rival, Gary, shows up and taunts Mike about the Bowl-Off-A-Thon and also appears to be the apple of Rose’s eye, being allowed to skip his paperwork for bowling.

The MIFT Team is fixing the ball return at the Monsters Inc. bowling alley when they open the machinery and find Mike stuck inside after trying to “be the ball.” He explains why he was in the machine when Gary shows up at the alley with more taunting and Mike says he’s sponsoring a team that will beat Gary’s, who then shows off his incredible bowling prowess. Tylor wishes his team luck when Mike explains that he doesn’t have a team and needs to find one, of course, giving Tylor an idea to get in good with Mike to make him a jokester.

Down at the MIFT office, Tylor is trying to recruit Fritz and the others to form a bowling team and Fritz interprets this whole effort as a way that Tylor is trying to bond with the rest of his co-workers. Tylor tells Mike he has a team and Mike asks how good they are, with Tylor explaining that they’re so good they already have nicknames like No Splits Fritz and Pin Pal Val. Duncan doesn’t bowl though, he just enjoys the snot-chos. The best gag of the whole episode is subtle, but also the title of the episode: When Mike is trying to devise a team name for the BOWLING team, Sulley (Voiced by John Goodman) suggests “The Big Wazowskis,” an obvious nod to a film that heavily features bowling and stars John Goodman alongside Jeff Bridges and others titled The Big Lebowski. Mike even uses the term “Dude” a few times, possibly referencing the main character in that film. Mike goes on to tell Gary that he has a championship team and decides to make it interesting, saying the loser has to do the winners paperwork for a month.

Tylor and the rest of the MIFT team are down at the bowling alley and Tylor is pretty good, expecting a performance equally as good as the rest of his team. Spoiler alert: They’re terrible. Meanwhile, Duncan is laughing because he sees right through Tylor’s plan and watches his hopes and dreams crumble with great joy. However, through various circumstances and loopholes, the Big Wasowskis actually advance through the Bowl-Off-A-Thon eventually getting to compete against Gary’s team, the Garys. Mike decides to increase the bet to not only do paperwork, but be each other’s butler for a month.

After Tylor hears of this, he signs a written agreement/contract with Duncan to recruit bigger, better monsters for the team as long as he agrees to never try and go for Fritz’s job (which Duncan wants). Duncan fills his end of the bargain and gets Tylor the better players. Tylor tells the rest of the MIFT team that they should go to town for lunch and that the last round of the Bowl-Off-A-Thon has been cancelled via a poster he wrote the word “Cancelled” on. Mike is on scene at the bowling alley with Tylor when the new team arrives, but just behind them is Duncan the MIFT team who are devastated to find out that Tylor’s plan was selfish and his own interest the entire time. The new team decides that they don’t want to play with a captain that betrays his team, and now Tylor has nobody. Mike starts panicking and Tylor apologizes, but Fritz says that they’re still a team no matter what, and backs up Tylor to help him and Mike win the Bowl-Off-A-Thon.

Tylor proves he’s a team player and team captain by coaching them through their inabilities in the sport and the team does surprisingly well. After an 80s-esque montage, we see Needleman announce the winners of the Bowl-Off-A-Thon, which I won’t say here. Let’s just say Mike enjoys a dinner for two at Harryhausen’s (where his new position at Monsters, Inc has lifted his lifetime ban at the restaurant).

As usual, we now get to attend the next entry of Mike’s Comedy Class which deals with the topic of heckling, only to be interrupted the entire time by Gary, who is in fact, giving us a prime example of heckling. This really only succeeded in me wanting to see a scene where a kid is actually heckling a monster trying to collect the laugh energy, and how big of a problem this really is that it needs to be addressed in Mike’s Comedy Class.

The latest episode of Monsters at Work is now available on Disney+.