Blockbusters come in all shapes and sizes like Disney’s current success, Jungle Cruise. Sometimes blockbusters can be unexpected, like 1996’s Phenomenon. This surprise hit was another victory for the John Travolta comeback, and a benefit to Walt Disney Pictures coffers. 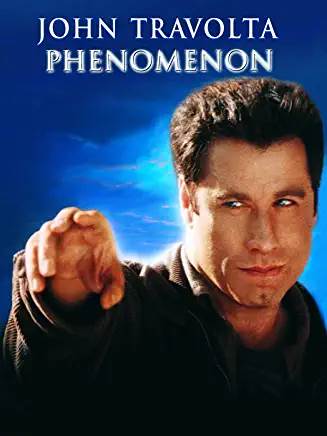 It’s a happy time for George Malley. The affable mechanic turns 37, and while celebrating the festivities with his friends at a local bar, George steps outside, only to be confronted by a ball of light descending from the sky. The light makes physical contact with George and knocks him down. Coming too, he reenters the bar describing his experience which everyone laughs off because they all think the slightly inebriated George imagined the event.

As day’s pass, George starts to exhibit new abilities. The average mechanic can now absorb large quantities of information. He becomes capable of doing anything, including learning new languages in minutes. While George has unique abilities which amaze and terrify the townsfolk, he runs afoul of the government.

After an incident in town, George learns the truth behind his amazing abilities, and his friends like Nate, Dr. Brunder, and Lace must deal with the reality of George’s situation.

Phenomenon succeeds based on John Travolta’s performance. He is at the height of his stardom in the 90’s, and George Malley is a perfect character for him to inhabit. Travolta gives George heart and soul that make the audience care for his success.

Phenomenon harkens back to the Jimmy Stewart and Gary Cooper everyman films of the 30’s and 40’s. The town and the people are spotlighted and thanks to unique supporting characters and the feel of the small town on screen, the audience connects with George on a deeper level. Travolta’s character is excellent, but he needs the town and the citizens to help him elevate his character.

There are too many plot twists in this story. The story of George Malley becoming super smart after being hit by a mysterious light is a great arc to explore. How he uses his intelligence to help the people in the town is a great follow up piece. Then having him become a master code breaker, the army chasing him and wanting to study his brain, the townsfolk go from awe to fright because he has developed telekinesis, the romantic relationship between George and Lace, and then the resolution to how George got smart is too much for the film. The removal of the army subplot would keep this a story about George and the town which was what I really enjoyed about the film.

Robert Duvall, Forest Whitaker, and Kyra Sedgwick are fantastic actors, but they aren’t given much to do in the film. A few less plot twists and more development between George and these three characters would have been a plus.

Phenomenon came out in the summer of 1996 the same weekend as Will Smith’s alien juggernaut Independence Day and was a success. The film was expected to be washed away in the wake of Independence Day’s box office domination but survived and thrived as counter programming to the alien epic. The reason Phenomenon did well at the box office and continues to be an enjoyable film is because of John Travolta and the innocence he brings to the role of George Malley.

Phenomenon gets 3 Golden Popcorn Buckets. The film is a wonderful throwback story about the everyman who experiences a great change but a lengthy storyline with multiple plot twists makes the story a little convoluted. John Travolta shines in the role and should have been nominated for an Oscar for his work.