High School Musical: The Musical: The Series is officially against the Tony Awards. Kidding, of course, but the take away from the finale is that sometimes the art is more important than the recognition. Before I go all philosophical and this turns into a memory play a la The Glass Menagerie, let’s break down the episode in full. 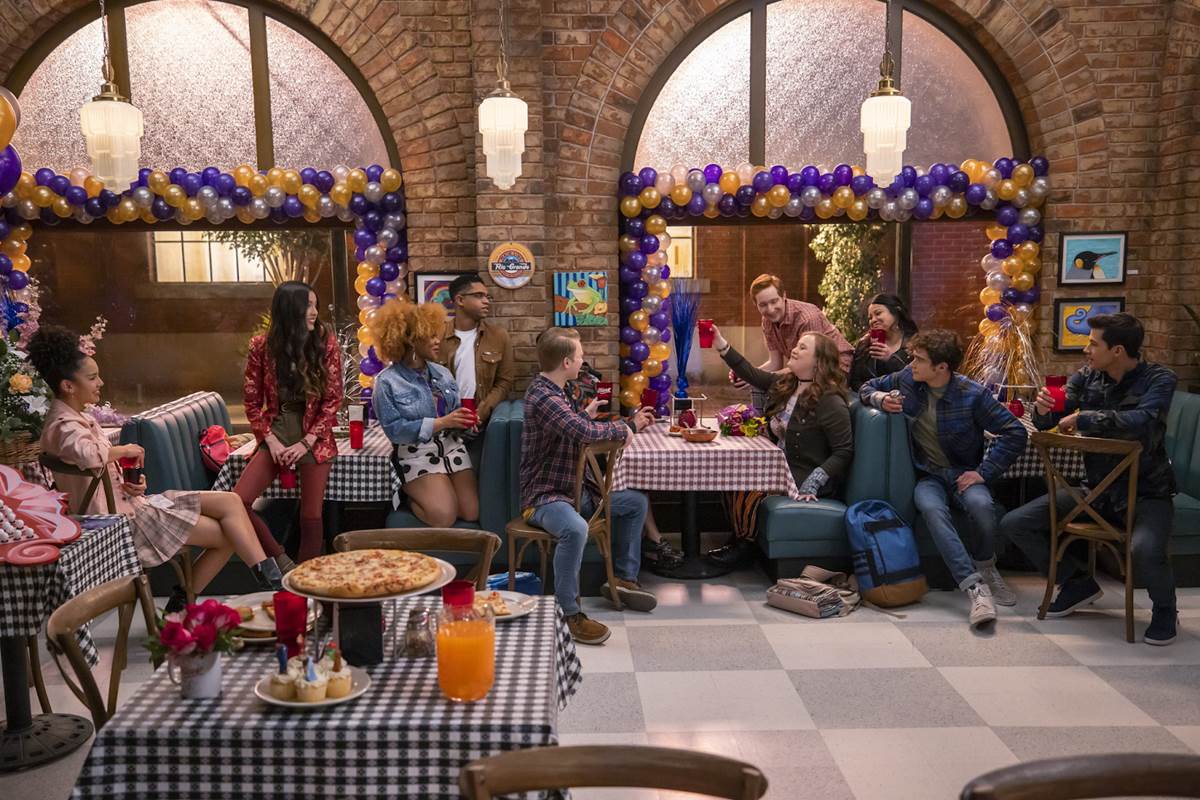 The problem-filled ending of last week’s episode is resolved quickly as the transformation is deemed “passable” by Kourtney, which is honestly a positive, so we’ll take it! The cast celebrates opening night and gets ready to head to Slices for the after party. Before the crew separates, Big Red surprises Ashlyn with a large sign, sharing that her name “deserves to be in lights.” We’re at cry number one for me this episode.

Howie runs into Kourtney, sharing that the weird energy he was giving off earlier was pure astonishment at her talent. Get you a man who looks at you like Howie looks at Kourtney after performing the role of Miss Potts! Was Kourtney’s mom looking at her during their entire heart-to-heart? Yep. Was I cringing as badly as Kourtney? Nope. Worse.

The “big brother energy” comment from Gina’s brother is still affecting EJ when we run into him. He quickly shuts down the risotto date, knowing that he’s not being seen as a potential love interest for Gina. Yet, as we know, Gina is all ready to date EJ and is in it for the long haul. Of course, the news devastates Gina. She runs back to the dressing room to slip out and skip the Slices party. Nini runs into Gina and they commiserate, while also uplifting each other. Nini says Gina is a score not only for any guy out there, but also for everyone in her life. Gina compliments Nini on her ability to look out for everyone during opening night. They are both finally happy to be in a place where they can love and appreciate each other and, like, same. Ricky and Nini share opening night cards that are very much “Go on, girl! Give us nothing!” Ricky ends up going to see Miss Jenn afterwards. Miss Jenn not only apologizes for her hurtful comments towards Ricky about the transformation, but also for pushing everyone too far in the name of awards recognition. Ricky goes ahead and gives Miss Jenn the approval for her to date his dad and she shines like fireworks on the 4th of July. She’s wanted this and [screams] I GET IT! Ricky is at a crossroads and his bubbly personality is starting to break away. I just want to hug him and say that everything is going to be okay, ya know?

Ricky, Nini, Gina, and EJ share the song “Second Chances” and I can’t put into words how much it hit me like a ton of bricks. It’s emotional, showcasing just how teens feel throughout the high school experience. You must watch below and openly weep, as I did.

By the time we get to Slices, the mood has turned into a true hatred for the Menkies. They have been fulfilled enough by the performance. Awards are meaningless and they have only created tension within the group. Miss Jenn arrives and agrees, never even opening the nomination envelope. A totally sweet way to end this season’s major performance arc.

Within the final moments, we get a whirlwind of news. Gina finds out about the “brother figure” comment and is able to rectify the issue…with her first kiss! EEK! Mr. Mazzara is also into Miss Jenn! Love triangle alert! Ricky is calling Lily (ew), Nini is calling Gina’s brother (yippee!), and I’m calling Tim Federle over the Seb erasure this ep (JK, love you Tim, cast me <3).

With that, we say goodbye to East High for the season. It’s been a roller coaster of a semester, but the hint at summer vacation is enticing and intriguing. What show will they perform next?! See you later, Wildcats!