Disney and Pixar’s Luca is now available on physical media for collectors to enjoy again and again. Whether your internet connection isn’t robust enough for streaming the film in high quality on Disney+ or you want a higher degree of clarity and more audio options, the 4K Ultra-HD/Blu-Ray/Digital Ultimate Collector’s Edition includes three formats to enjoy Luca anytime, anywhere. Plus, if you’re looking for a peek behind the scenes, the included bonus features feature content you won’t find anywhere else. 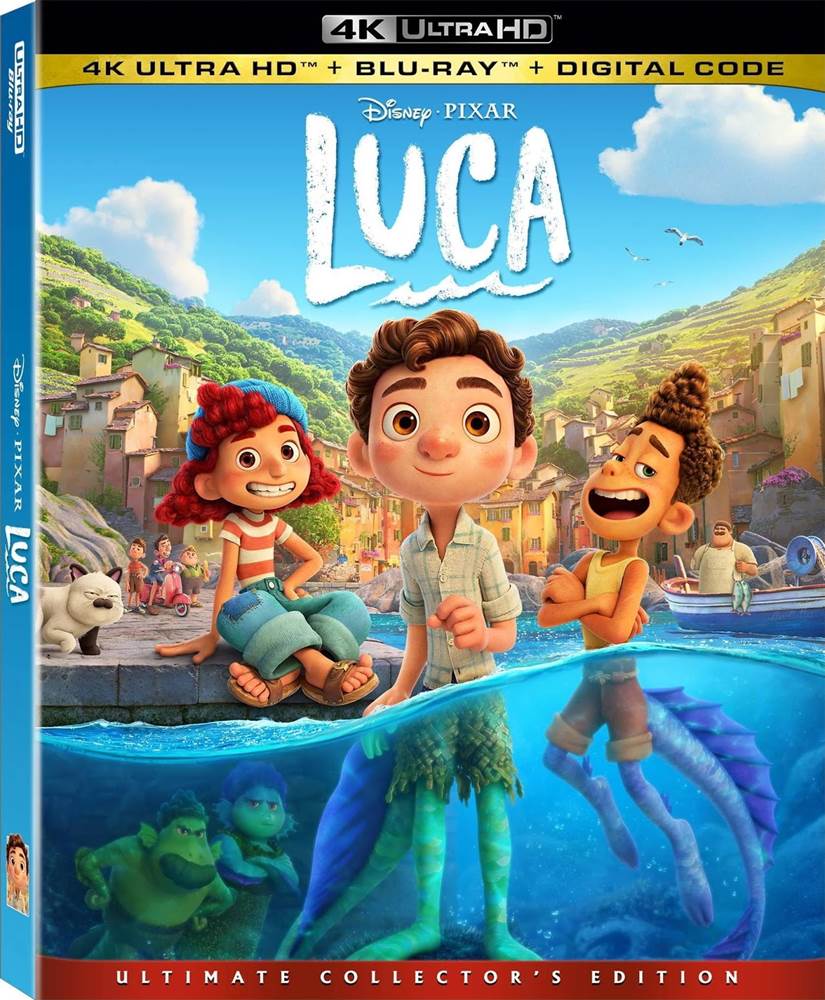 Luca is a curious sea monster who wants to know more about life on land. When he meets a new friend Alberto, he discovers not only what it means to be a best friend, but also a new passion for Vespa scooters. The two boys will do whatever it takes to finally get an elusive motorized scooter.

Released directly to Disney+, Luca missed its moment to shine on the big screen, enchanting an even wider worldwide audience. Full of humor and charm, the film was an instant winner, but left fans who prefer seeing movies on the big screen feeling a little let down. If you have a big screen TV and a surround sound system, this release not only offers enhanced video quality than what streaming can match, but also better audio options.

The 4K UHD disc is headlined by a Dolby Atmos mix (My home theater doesn’t have this option). With 7.1 Dolby Digital tracks in English, Spanish, French and Italian, this disc offers a superior auditory experience to the streaming version, which only offers 5.1. The Blu-Ray disc only offers an English 7.1 mix, with the other languages available in 5.1 surround sound. Pixar also offers an English 2.0 track and an English descriptive audio version on both discs.

The Ultimate Collector’s Edition of Luca is housed in a standard black Blu-Ray case with holographic embossed slipcover. Disc holders on the interior of both sides of the case hold the 4K disc on the right and Blu-Ray disc on the left. Both discs have artwork in this set and inserts include a code to redeem your digital copy (Movies Anywhere) and bonus points (Disney Movie Insiders).

Both discs have identical menus, depicting a moving screenscape of Porto Rosso set to score from the film. The Blu-Ray disc has one ad for Disney+.

Scaled back from Pixar’s typical 2-disc exhaustive home media presentations, collectors are lucky to have the opportunity to add Luca to their home video collection at all in a world where they’re becoming increasingly rare. With an exceptional 4K presentation, you’ll see more of the detail the Pixar artisans put into the film than you currently can through streaming. And with better sound options, those with their own home theater can get closer to the theatrical experience that Luca never had.