Are you ready to know the ins and outs of villainy? Disney Villains: A Portrait of Evil is a new release from Insight Editions that features original artwork, fold-out “Artifacts of Evil,” a recap of each villain’s success and failures, and other fun details. Perfect for ages 8 and up, it’s both fun for kids and Disney Villains fans of all ages. The first thing you need to know about Disney Villains: A Portrait of Evil is that this is likely the first in a series of books of its kind. Scribe Pat Shand makes it clear in a brief epilogue that they are still searching for more tales of evil, so if your favorite Disney Villain isn’t featured in this release, just know that they may be included in a future installment. This book divides the villains into three categories: “Enchanted Evil” (villains who have magical powers), “Mortal Peril” (villains who don’t have magic, but are still sinisterly evil), and “Inhuman Terror” (villains who aren’t technically human).

Four Disney Villains have fold-out hidden items, becoming somewhat of a scavenger hunt for readers. The artwork by Justin Hernandez and Alexis Hernandez has a gritty, chalk-like texture, with wavy backgrounds that conceal the seams in the paper. The Queen, Dr. Facilier, Captain Hook, Scar and Chernabog are the five villains to feature these “Artifacts of Evil,” one of which is actually removable from the book.

Other villains featured in the book include Maleficent, Jafar, Ursula, Queen of Hearts, Mother Gothel, Lady Tremaine, Prince Hans, Gaston, Cruella De Vil, Hades, Shere Khan and Kaa. The two most recent characters are King Candy from Wreck-It Ralph and Tamatoa from Moana, neither of whom come to the top of my mind when I think about Disney Villains, but I really enjoyed their sections. While all of the A-list Disney Villains are featured here, I already have some characters I’d love to see in a follow up (Yzma, Ratigan, The Horned King, Prince John, etc…).

Whether you’re young or young at heart, Disney Villains: A Portrait of Evil is a fun way to celebrate some of the greatest Disney baddies of all time. Full of gorgeous new artwork and fun pull-out features, there’s a treat (and a few tricks) with every page turn. 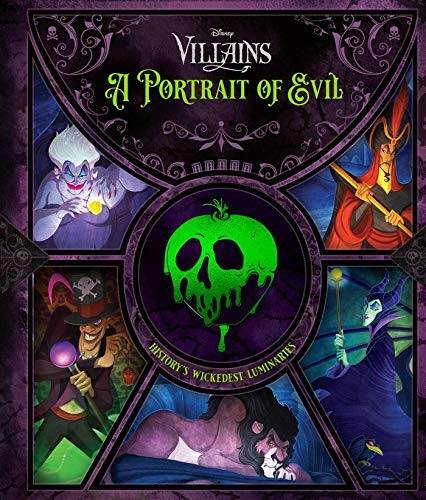