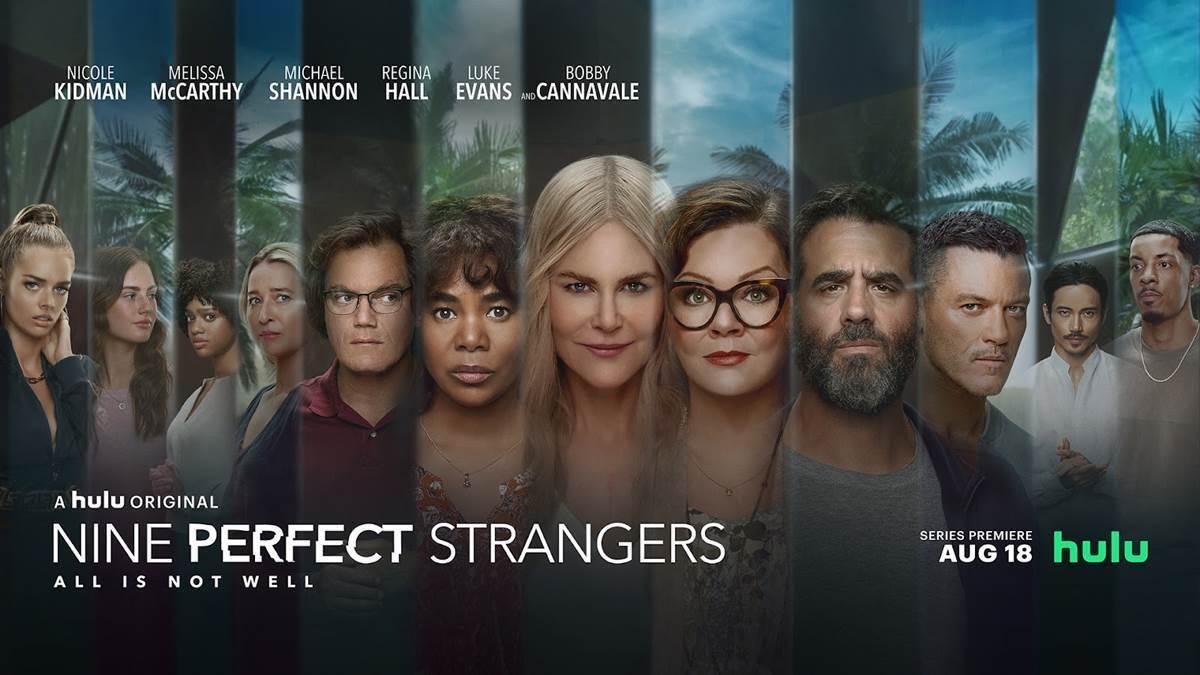 Each of the nine guests at the retreat are in pain and with the help of Masha and her creative treatments they will confront their deep-seeded sorrow and learn to move on from their pasts. Upon arrival at the retreat, each guest doesn’t know how regimented and unorthodox the program is or the methods employed to treat the guests.

Nine Perfect Strangers is a show about admitting to your past mistakes and letting go of the pain that you carry each day. In the world of Tranquillum guests will question what is real and what is not as they learn to move beyond their own pain.

Melissa McCarthy has a delicate balancing act as Francis. There are sprinkles of McCarthy humor throughout the series, but her refined and emotional arc as a betrayed novelist whose life is spiraling out of control is something we haven’t seen from McCarthy before. Seeing McCarthy take the lead in a dramatic role is a joy to watch. Not only is she funny, but her talent is undeniable. 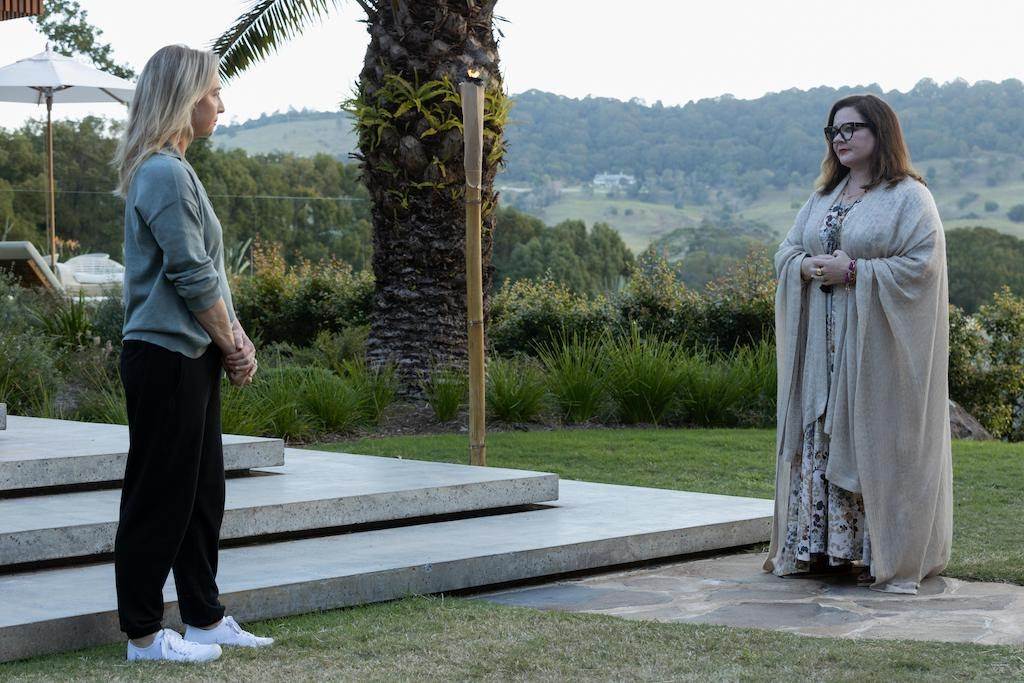 We feel for Francis because not only is her professional life in turmoil, (the failure of her latest book), her personal life is a wreck because of an online fraud/catfish scheme that cost her tens of thousands of dollars and damaged her emotionally. McCarthy contains this hurt, but plays Francis with skill, as she slowly unrolls her emotions in each succeeding episode.

Bobby Cannavale’s Tony is the opposite of Francis. We see the outbursts and his fragile emotional core on display from the moment he pulls up to Tranquillum. Tony is masking years of pain, a drug problem, a wrecked professional life, and family issues. His ego is bruised and his ability to be convivial with others is almost impossible. While it would be easy to not like Tony, Bobby Cannavale’s performance is nuanced and carefully constructed that he will certainly be nominated for an Emmy.

Michael Shannon, Asher Keddie, and Grace Van Patten play the Marconi’s. This family is still dealing with the aftermath of their son Zach’s suicide. This is a family walking a tightrope of survival. Michael Shannon plays against type as Napoleon the loving father who is trying to see the good in his life despite the loss of his son. His emotional arc throughout the series is the most evolving from episode to episode. Initially you wonder why he is there because he seems to be the most content. We quickly learn that Napoleon is suffering.

While Shannon’s Napoleon is a compelling character, the family dynamic between Michael Shannon, Asher Keddie, and Grace Van Patten is what makes the viewers feel the impact of Zach’s death the most. These three actors are a perfect family unit, taking their pain of the suicide and bringing their own reaction to the screen in a varied and emotional performance that will make viewers teary eyed during some particularly heavy scenes. Viewers will believe this is a family living the pain and not acting. 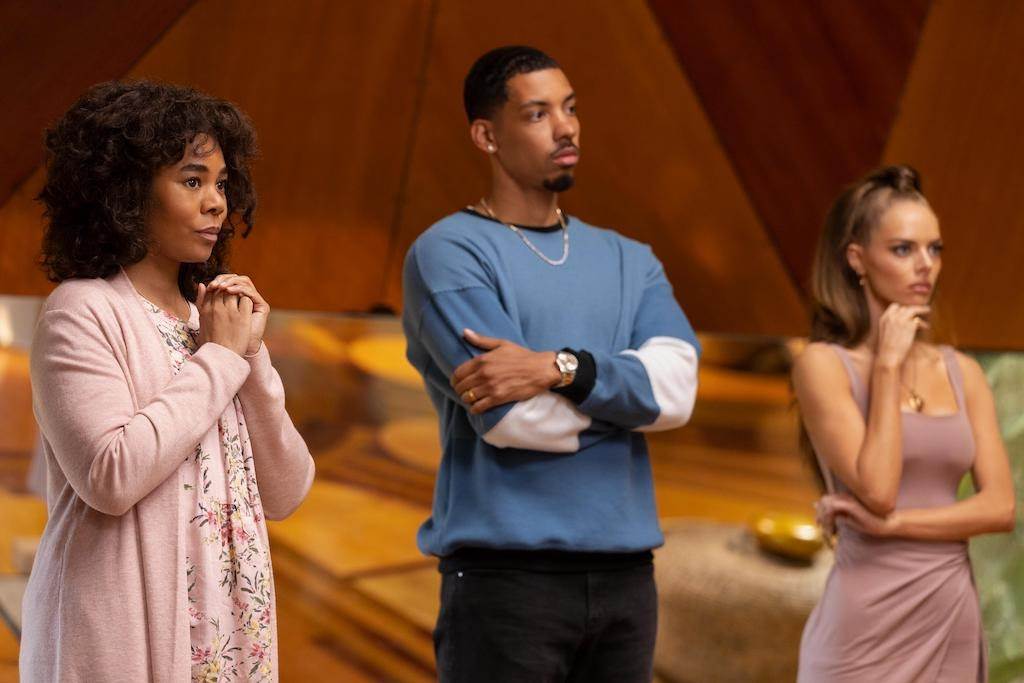 Nicole Kidman’s portrayal of Masha is unlike anything she has done in the past. She throws herself so deep into the role of the health guru that viewers will forget that Nicole Kidman is on screen and will buy into Masha as if they too were clients at Tranquillum. Kidman brings an ethereal forest nymph presence at the beginning of the series, but as viewers plunge further into the show, they will see the detailed and complicated life of Masha that is built on regret, violence, and heartache. Kidman not only plays the dual role of leader but scared survivor so well that she transcends the screen as an actor and brings real emotional depth to her role as Masha. If Kidman doesn’t clean up on the awards circuit for the next year, I will be shocked.

Luke Evans plays the reporter Lars who may or may not be trying to write a tell all about Masha and her work. Regina Hall as Carmel is another emotionally deep performance of a woman who was left by her husband for a younger woman. Carmel is a shattered woman who is holding herself together with all sorts of tape that is starting to fray. Samara Weaving and Melvin Gregg as Jessica and Ben play a wealthy married couple that have lost their relationship spark. Manny Jacinto and Tiffany Boone play Yao and Delilah, two delightfully complicated characters that have them spending an equal amount of time being all knowing leaders at the retreat to questioning Masha’s instructions behind the scenes.

From the first episode viewers will be hooked on the story of these nine strangers and will want to see what happens to each of them. Nine Perfect Strangers is loaded with multiple tour de force performances from a rich cast of talented actors. Fans of the Liane Moriarty book, which the series is based on, will find enough changes from page to screen to keep them guessing as the suspense builds in this eight-episode series.