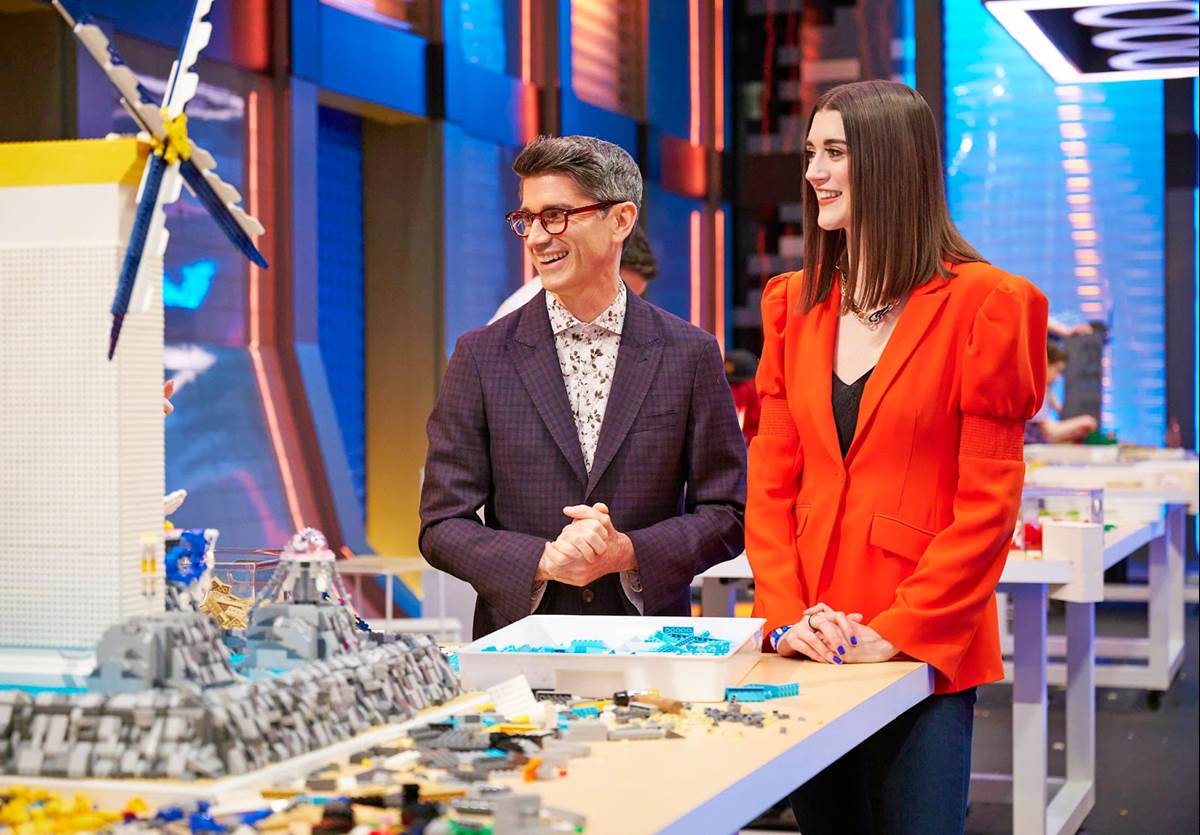 Laughing Place’s regular interview series with the eliminated contestants from FOX’s LEGO Masters continues this week with the sixth team to depart the show’s second season. Below I had the wonderful opportunity to speak with the married couple team of Maria and Philip. 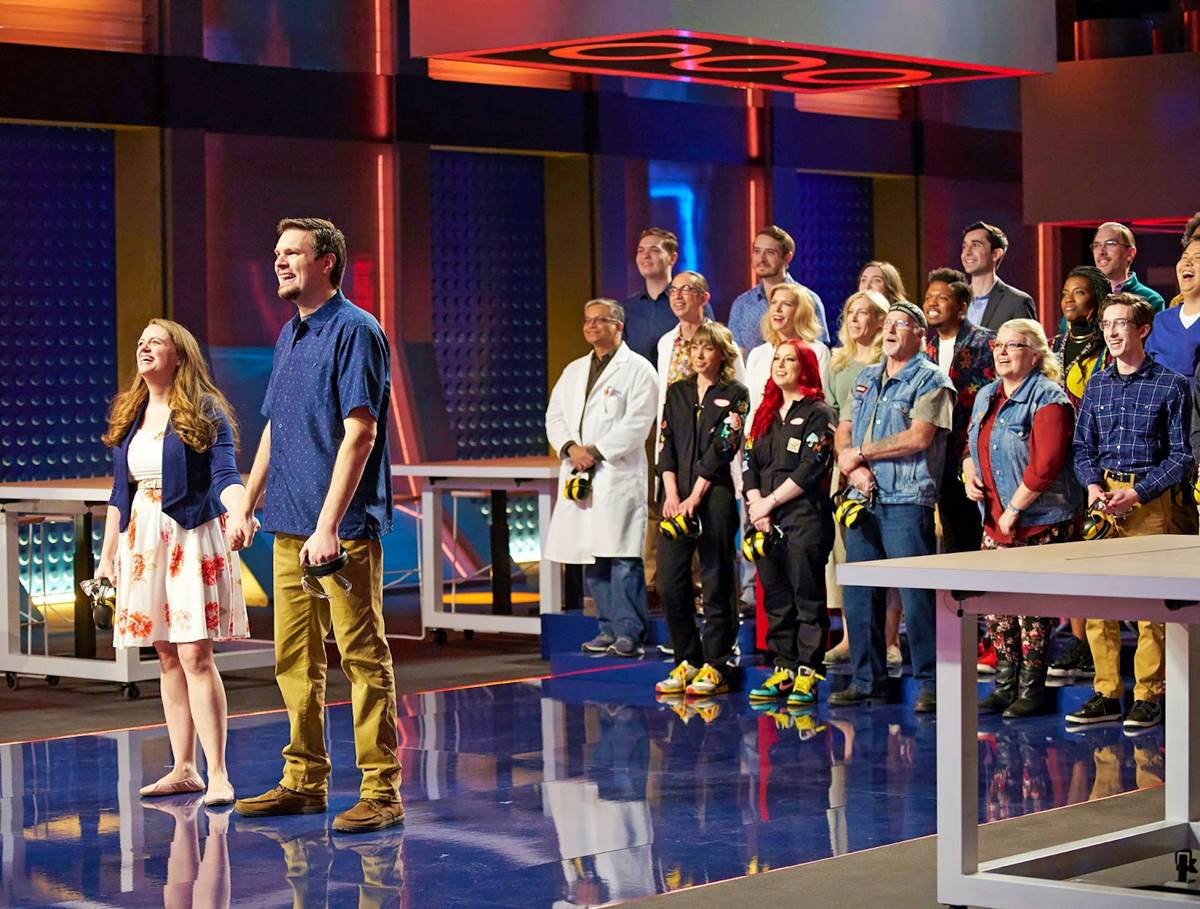 Mike Celestino, Laughing Place:  What was your history with LEGO before appearing on LEGO Masters?

Philip:  I played with LEGO as a kid growing up, pretty hardcore. It was video games, LEGO, and outdoor [activities]… and not in that order; [LEGO] was number one. That was pretty much the only toy I had growing up and like most [people], I stopped playing with them in my teens, with what we call our Dark Ages, which you don't spend building LEGO or buying LEGO sets. And then Maria was pregnant with our first-born and my parents brought our LEGO sets back to us, and I opened up the bucket and tried to reconnect with my childhood– [to] feel what it was going to be like to have a kid, and I just never really closed that bucket and that bucket has now grown. That's been 11 years now in the making as an adult fan of LEGO.

Then from there, discovering brick forums [was a] big part of our history, and then also discovering Brickworld Chicago. For a while there we were really broke, [and] it was our only vacation we would take every year– to drive down to Brickworld. And always displaying stuff and then getting involved with collaborative builds, and I had written for BrickNerd for a little while and now Maria writes for BrickNerd. That's my history… I kind of sucked Maria into my vortex of LEGO.

Maria:  Yeah, slowly but surely. I myself have only really been building for about two years but I've been attending Brickworld conferences with him since 2013, when I first found out that was a thing, I was like, ‘Okay, we go to conferences to see LEGO?’ [laughs] No, I love it; I think it's fantastic. I had been in that environment, seeing people create these amazing builds, helping him organize LEGO, giving him feedback, that kind of stuff, but I started building about two years ago when we were actually auditioning for season one of LEGO Masters. I built this little pine tree and a couple of little landscape-y things for the build that we did. Then obviously we didn't get into season one but I started building on my own after that and I actually started with a couple of little replica succulents, because I love succulents. I have a whole bunch of them– real ones. So I started an Instagram account and we started building together and creating MOCs together and I guess the rest is history.

Philip:  Maria was the one that really started our social media presence. I would post up on Flicker back when that was huge in the LEGO community. That died and I never really realized it had died and Maria's like, ‘No, everybody's on Instagram now.’ She was running that and that's pretty much our story of where we landed. 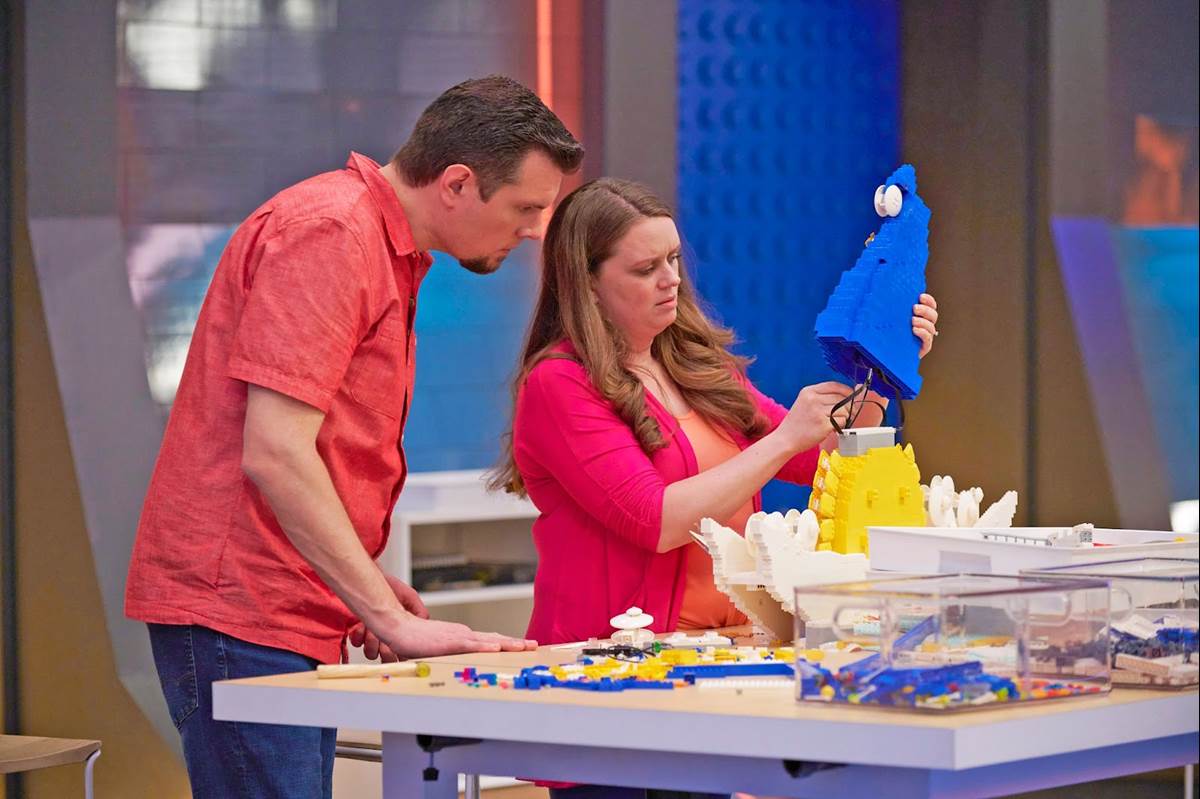 LP:  Once you did finally get accepted onto the show for season two, what would you say was your favorite part of the experience of actually shooting LEGO Masters?

Maria:  It was amazing. It might sound cheesy or cliché to say this, but the best part was definitely meeting the rest of the cast. All the other 22 cast members, they're like family now. I remember hearing season one [contestants] talk about their LEGO Masters family and I was like, ‘Oh, that's kind of cheesy.’ But I get it now. You go through this crazy shared experience that is really unlike anything else, and we may not have other things in common, but we have LEGO in common and we have LEGO Masters in common. We grew incredibly close with the whole cast and so that was definitely my favorite part… but building with the brick pit wasn't bad either.

Philip:  LEGO building and building MOCs, your own stuff, is still very much a very niche hobby. It's only getting bigger, [so] being around other individuals who love this stuff as much as we do is just [great]. And [the other contestants] being from so many diverse backgrounds, being able to make that connection is truly a fantastic way that people can pull back and realize that we have so much more in common than we think we do. People that I would normally not necessarily know in my life are now a huge part of my life. It has expanded my horizons as well as [Maria’s] horizons. This LEGO family from LEGO Masters will be something that will endure, I believe, forever. I'm sure you've heard this from other contestants as well. 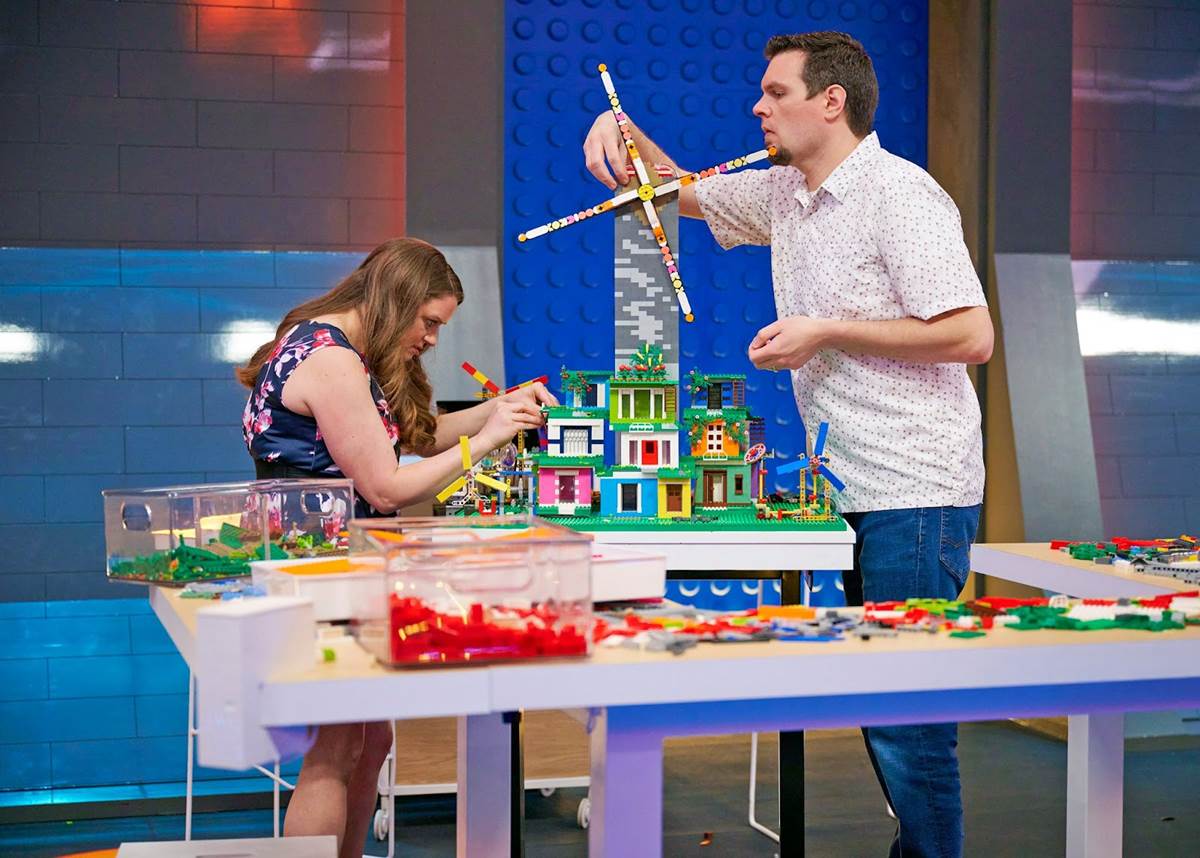 LP:  Yeah, I love hearing it over and over again. It seems like a really wonderful experience for those reasons. But moving on to the most recent episode, the challenge that got you guys eliminated was called “Bricking Wind.” How would you approach this challenge differently if you got a second chance at it?

Maria:  Well, one of the things about this episode was it was highly technical, and that's just in a sense that we had to create a propeller. It was also technical in the sense of the requirements that we had to meet in order for the build to qualify. I think the two of us got really bogged down in all those requirements– and trying to make sure that we met them– that we sort of forgot to be creative with our tower. So our tower ended up being too big for us to compensate for the propeller.

Philip:  Yeah, we spent too much time on trying to figure out how to make the actual tower stand up– which ended up not really being that big of an issue– and not enough time making the propeller itself strong, when that really should've been the focus. For that reason, I was still in a mindset of the shape challenge, where we had to build this super strong thing. The weak point, obviously [as] we learned, is the blade itself, and looking back I think we definitely would've spent a lot more time on that, maybe started with that first and then built out from there. LP:  How do you think you would have fared if you had survived the wind itself?

Maria:  My son actually asked me the same question. He goes, ‘Mom, do you think if you got to 60 [miles per hour] that you still would've gotten eliminated?’ And I was like, "Hmm… that's hard to say because 60 was the max." But I think even without the propeller breaking, we felt like we had the weakest build. I feel like we sort of said that every week. We were like, ‘All the builds are so good,’ because they were. But this one, in particular… it didn't feel like us. It didn't have our normal caliber of skills and details involved, and I think in the end we knew it wasn't as good as we could do.

Philip:  This was not our favorite build. There are times in your life where you're unsure about things and there's times where you're pretty sure and this was definitely one of them. We were like, ‘I'm fairly certain we're going home this week,’ which helps because you can kind of psych yourself up for the inevitable.

Maria:  We were mentally prepared. 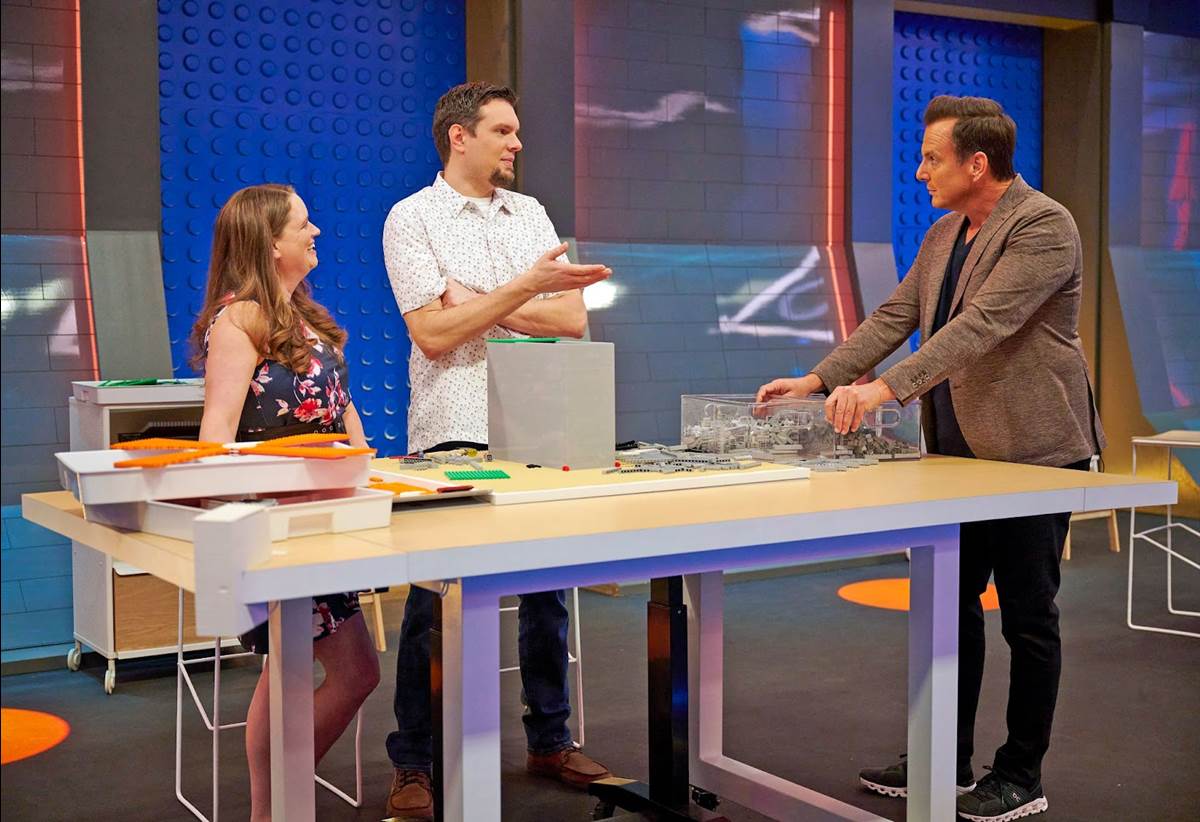 LP:  What tips might you give to contestants appearing on LEGO Masters in the future?

Philip:  The biggest thing to realize is if you're going to build something, remember what your audience is. You're building for TV, so always make sure that you're looking at the perspective of building for TV. Making things that are big and overexaggerated tend to win the day. Having those super fine details, some people can pull this off, [but] don't waste your time on a lot of the stuff that's not going to be seen. Make those details bigger and make them bolder. Coming up with crazy off-the-wall ideas definitely helps as well, and then practice ahead of time. Get a repertoire of things that you've never done before. We love building castles and buildings; that's our jam. But for example we could've spent a lot more time building characters, we could've spent a lot more time building creatures. You have those in there so you can spend the time working on the requirements of the challenge, like a fan, and then not having to worry about the rest of it.

Maria:  And learning how to use the Technic and technical stuff doesn't hurt either. [It’s] really important, and we knew that going in, but we were busy.

Philip:  Yeah, there's a lot of ramping up to being on the show that requires a lot of time. And then trying to raise two kids on top of that plus working full time is a challenge. Not an excuse, but a challenge.