“This right here is Disney Channel's first Indian American protagonist story,” Director Manjari Makijany said during a live Q&A at the drive-in premiere of Spin, the newest Disney Channel Original Movie (DCOM). Turning to the cast of four young actors, she adde “You guys are making history, in a way.” 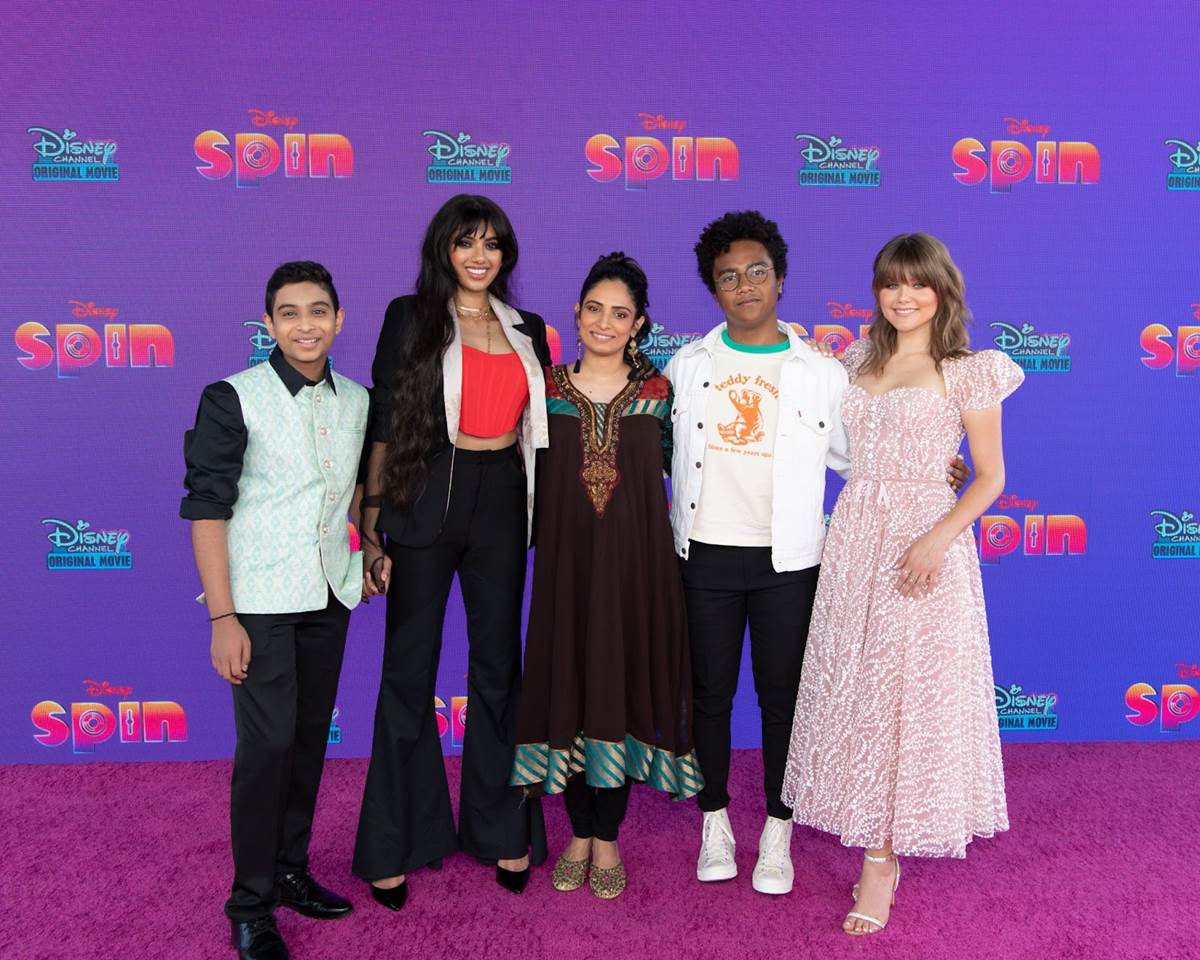 At a Southern California drive-in theater on August 10th, members of the cast and creative team gathered together to celebrate the release of their film. With a DJ party before the show by Girls Make Beats, photo ops, and food trucks, including a recreation of the “Taste of India” restaurant from the film, attendees got to step into Rhea’s world for the night. But the real highlight of the night wasn’t the Tik Tacos (chicken tikka masala tacos), but hearing from the cast, director and team.

“Every now and then, we get to work on a project that feels a little extra special to us because it's the kind of movie or show that we wish we got to watch when we were kids,” shared Mahita Penke, a creative executive at Disney Channel on the team that helped bring Spin to the screen. She recalled being a kid who was obsessed with DCOM’s like Brink, Zenon: Girl of the 21st Century and The Cheetah Girls, but not seeing herself in the characters. “Today, because of Spin, my nieces and my nephews are going to have that opportunity. They're going to get to see this movie of this empowered Indian American teenage girl go on this journey of self-discovery, and they're going to grow up with a movie that not only celebrates music and friendship, which it does beautifully, but it also celebrates the deep love between a multi-generational, multi-dimensional, Indian-American family.”

One of the surprising reveals was that this project almost got off the ground four years ago. “I actually auditioned for this project when I was 12 years old,” Avantika explained, who stars as Rhea in her first film role. It was actually the first thing she ever auditioned for in Hollywood, but the project was put back in development and refined. “I re-auditioned for it after spending two or three years in LA,” she continued. “To finally have gotten it, to be my first movie, it's just a really full circle moment considering it was my first audition ever back when I was 12 years old.” To cast Rhea’s family, Manjari Makijany went global with her casting, praising Disney Channel for giving their full support of her decisions. “I think it’s one of the best global casting pieces put together,” the director shared. “We have Meera [Syal] from the UK, we have Abhay [Deol] from India… It's really a beautiful ensemble put together, and I was really happy because I couldn't have imagined a better daadee, couldn’t have imagined a cooler dad. It really came together beautifully, and Disney really got behind that vision.”

Aryan Simhadri plays Rhea’s brother Rohan, who talked about creating the onscreen family dynamic. “We didn't have to put extra effort into building a family,” he shared. “We got along really well, off set and on. Everyone just bonded great, and even during the chemistry reads, which was one of the final stages of the audition process, I read with four different dads, I read with Avanti, without Avanti, and this was just a combination that really clicked and I think hopefully it shows in the movie.”

As a result of the international casting, not everyone was able to attend the in-person premiere. Through a video message, both Abhay Deol and Meera Syal reflected on their own excitement for the project. “It's an opportunity, not just for someone like myself who looks and sounds like me to play a role that is central to the plot of the movie, but it also represents this community, the Indian American community. It kind of gives us a voice, it gives us a platform. At the same time, it also just makes us look as normal and as average as any other American family. I think it's a really joyous celebration of biculturalism in a very muted unassuming way.” 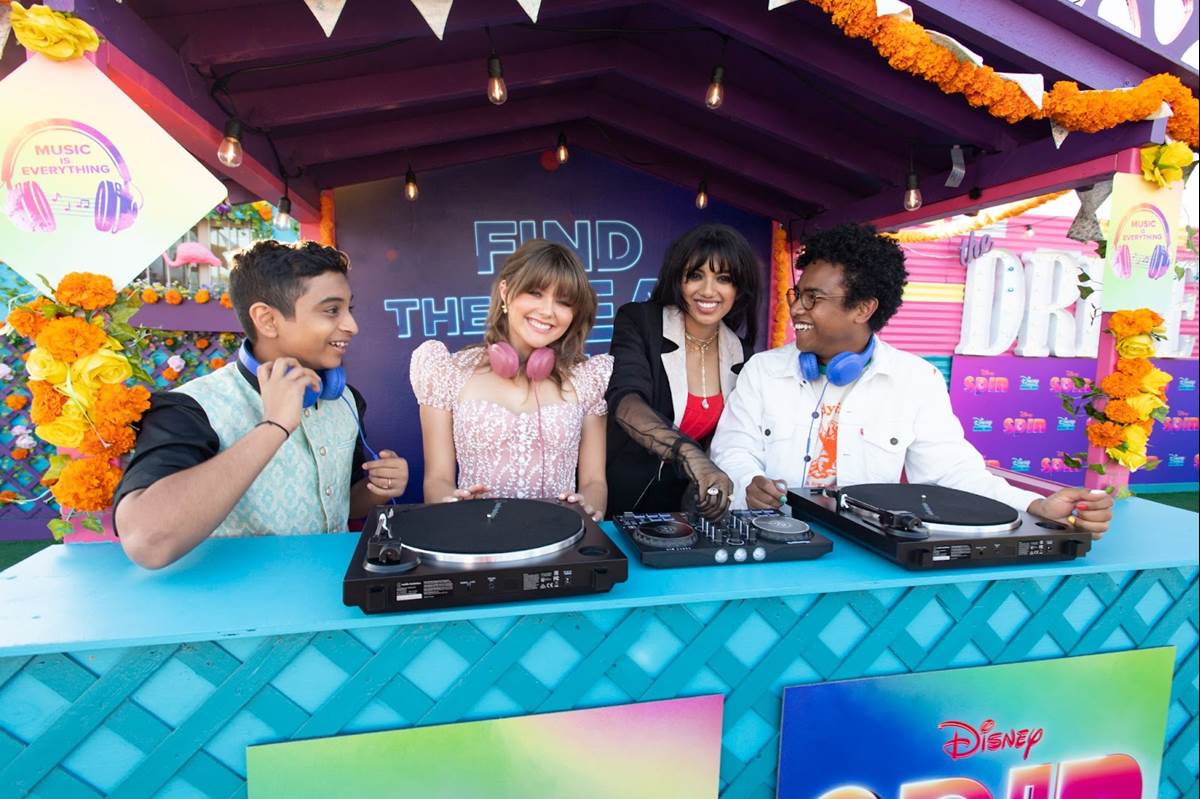 Meera Syal shared her enthusiasm for the dynamic of Rhea’s family. “What I loved about working on Spin was the opportunity to showcase an Indian-American family who, through their multi-generational living and working together, were always supportive and always having fun. I love sharing and presenting the journey of Rhea and her challenges to discover her voice as an artist and the courage that it takes to follow that voice. And it was a pleasure to work with Manjari and our cast from around the world. It was really an extraordinary opportunity to come together and tell this very, very special story.”

Director Manjari Makijany explained that when she read the script, she knew that she had to be the one to bring Spin to audiences. “I hope people can take the flavor of India and experience the culture in this amazing way,” she concluded. “But it's also about inspiring this new generation to really go after what they believe in it, doesn't matter if it's unconventional. Once you embrace your talent, you really come into your own. So I hope they take a little bit of that, and that's Spin for me.”