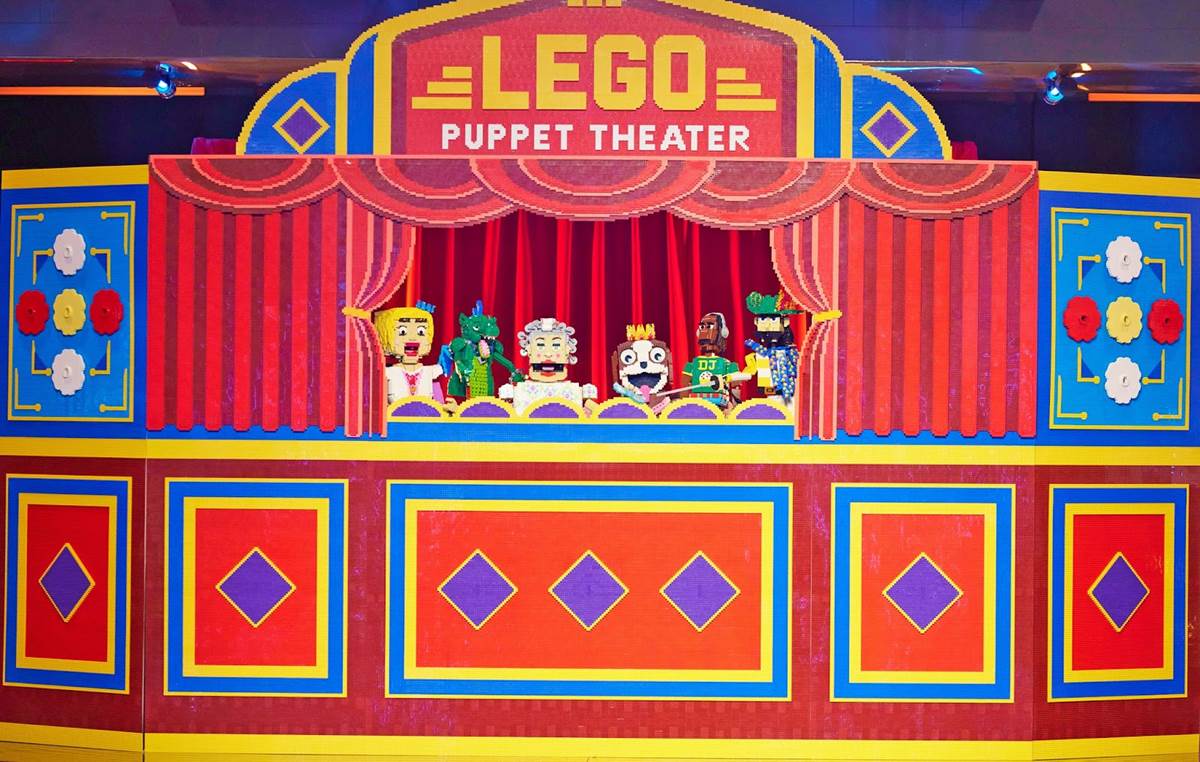 Laughing Place’s series of interviews with the eliminated contestants from FOX’s LEGO Masters continues this week with the seventh team we’ve had to bid farewell to during the show’s second season.

I had the wonderful opportunity to speak with the brother-and-sister team of Bryan and Lauren, who told me about their experience as LEGO builders and what it was like participating in the hit reality competition series. 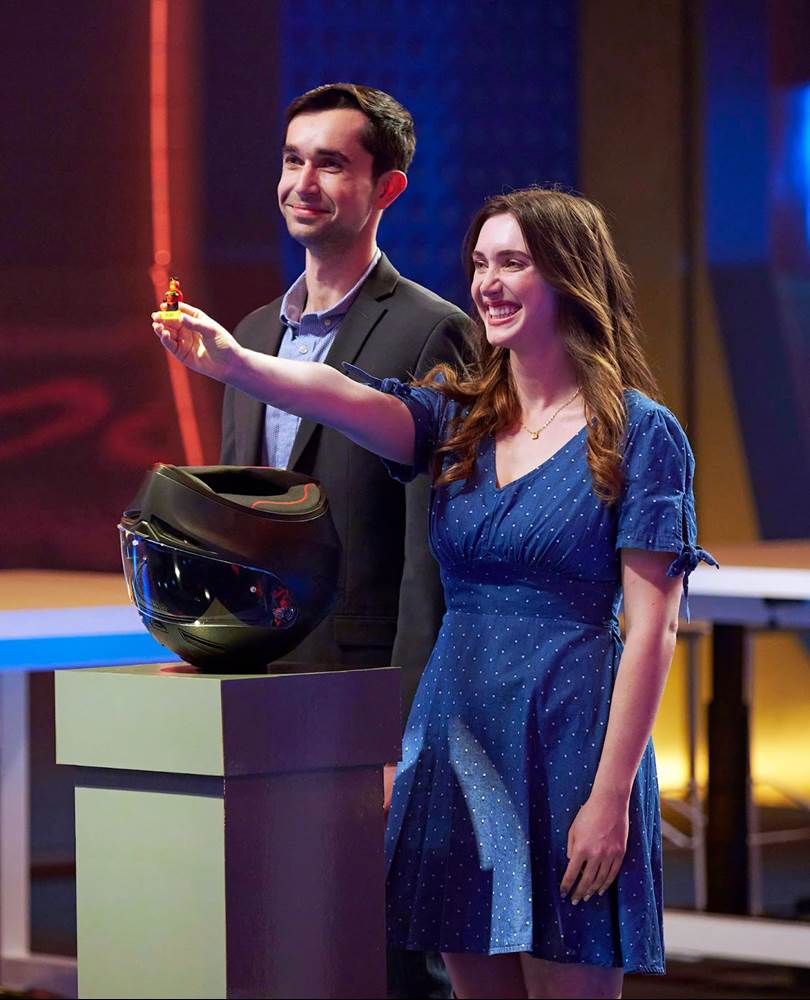 Mike Celestino, Laughing Place:  Tell me about your history with LEGO prior to being on LEGO Masters.

Bryan:  We've been building for a really long time. I started when I was three and my dad brought home a little Town minifigure set. I started taking it apart [and I’ve been] building my own stuff ever since. Then when Lauren was born, [we] brought her right into the hobby. We started getting a lot of Belville sets, and building those together– fairies and princesses.

Lauren:  It's a discontinued LEGO line, but it was my all-time favorite up until that point. We played a lot of the LEGO video games together: LEGO Star Wars, LEGO Indiana Jones, Batman, Lord of the Rings, Pirates [of the Caribbean]… so many of them.

Bryan:  Other than that, we go to LEGOLAND a lot. We're fortunate enough to live at this midpoint between LEGOLAND California and Disneyland, and we would go to both of those places.

Lauren:  We are theme park kids through and through. I think that bleeds into our building style, because we are big storytellers and we love fantasy.

Bryan:  Yeah, we love fairytales. We love to build things that are cartoony and fun and have bright colors. We just like to bring that energy to everything we do, and it all started with the fun sets that we grew up with as kids. 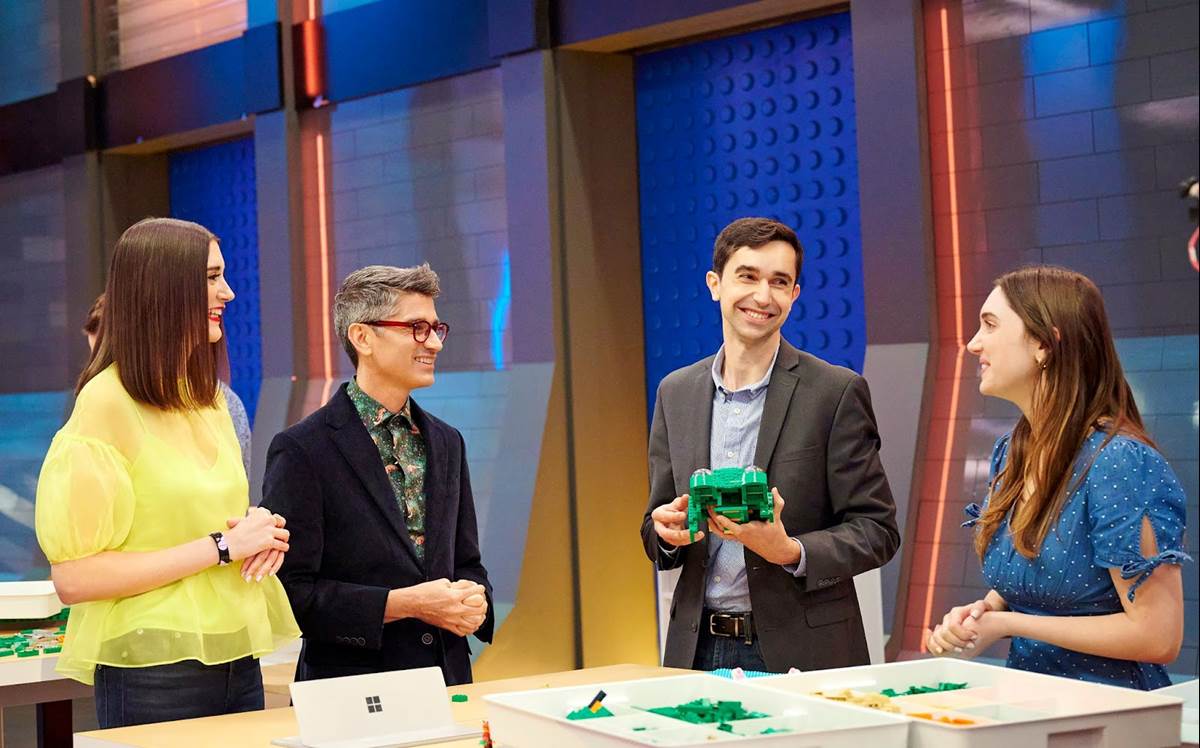 LP:  Once you became contestants on LEGO Masters, what was your favorite part of the overall experience?

Bryan:  There were so many highlights of our journey on the show. A high point for me was when we got to do this “Hero Shot” challenge in the second episode. We got to tell a story– we had to build something where our hero minifigure could stay standing in the foreground while something behind it blows to smithereens. We had a ladybug minifigure, and we had a giant frog behind it as her predator. She blew that frog up with an ingenious pollen plot, and it was so much fun. That build ended up getting us the win for that second challenge. Just having all the support from the other builders and to have everybody talking to us about it was really special.

Lauren:  Definitely. I'd say that's also one for me, and in addition to that it was so exciting having so many bricks at our disposal that we could use. We've never experienced something at all like that before. It just gave so many options for possibilities on what to build and what to create. I think another thing that Bryan and I both really [loved[ was meeting this incredible community of other builders. Bryan talked about how many fun conversations he's had with people about sets– they all had the same sets growing up together. [We enjoyed meeting] such kind souls and creative people and people who want to build each other out. LP:  What do you guys feel were your biggest challenges in this week’s “Puppet Masters” episode. If you had it to do over again, how might you approach it differently?

Bryan:  I think this episode was so fun, first of all. It was one of our most fun episodes. Everything was so happy on set– so great.

Lauren:  It was collaborative.

Bryan:  And we were really proud of the build that we were able to put forward. It was inspired by our dog.

Lauren:  Honestly, it's one of my favorite builds we made the whole time.

Bryan:  It is, yeah. We were really happy with the end result. It really captured the essence of our cute little puppy at home and we were happy with it. I think if we were to do anything differently, honestly, it probably would have come down to the performing of the puppet. I was doing the movement, and I was so caught up in having to memorize lines for the first time– which is something I've never done before– and having to hit all these beats. We had to do our special skill while holding up this really heavy LEGO puppet and operating the mouth and stuff.

Lauren:  It was a lot to think of at one time.

Bryan:  It was. I think I mentioned in the episode, I just got so absorbed in that that I didn't let the puppet shine as much on stage as I could have because I had so much else going on in my mind. I wasn't always remembering [to] move it so that the ears move, and do the mouth all the time. There were so many things to remember and I forgot a lot of those things. [But] we were happy with it. It was a happy feeling to go out on one that we were proud of. 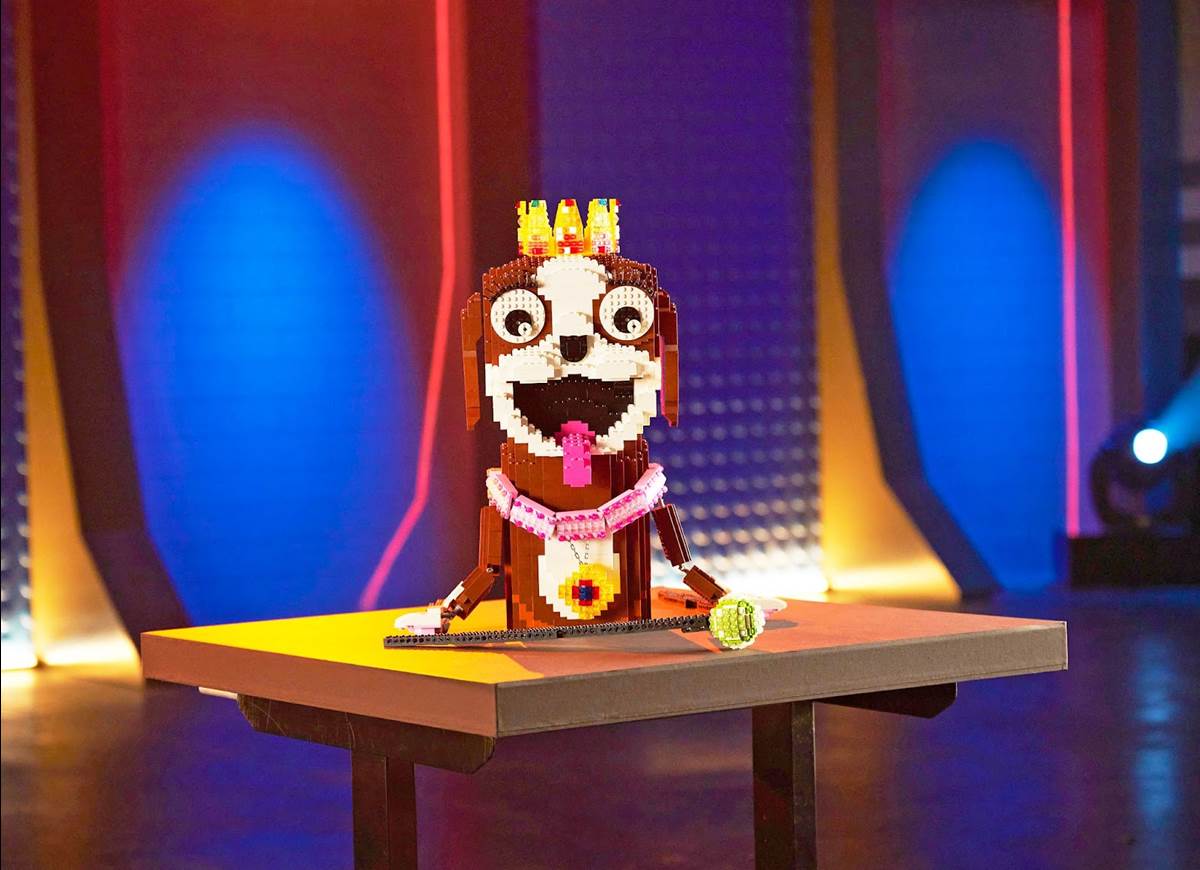 LP:  It seems to me the challenges have been more technical this year. Did you guys find that to be the case?

Bryan:  We did, yeah. That's something where, when we entered the show– having seen season one– we're storytellers and we loved all of the storytelling-centric builds that we saw in season one. We were like, ‘Oh my gosh, this is right in our wheelhouse. We're going to do this.’ And in season two, there is definitely still some of that, but a lot of the challenges are really technical and they're focused on building strong things that can withstand this and that. That's not how we build, and that's not something that was inherent in our building style. So we really had to adapt quickly to learn how to build strong [and] how to build with Technic.

Lauren:  We didn't expect that going into this. Definitely season two's a bit different from season one, but Bryan and I did still work to put a story into every single build that we had.

LP:  Were there any highlights that stood out to you from your interactions with the judges Amy and Jamie or host Will Arnett?

Bryan:  Yeah, absolutely. We felt that the Brick Masters were so great at guiding us during the build process. They gave really insightful feedback that really helped us hone not only our storytelling, but how to make the build meet the challenge. There were a lot of times where the challenges had so many technical rules, as you said, and it was hard to get a sense of what the Brick Masters really wanted. So when they would come around, they'd kind of specify and hone in on the parts that you knew were important. And they were good at guiding our path with our story, too. They were great.

Lauren:  They were so helpful. Bryan:  And Will was so fun.

Lauren:  Our favorite time with Will was in episode five where he called our mom and they had a whole long conversation. They actually pulled my phone out of the holding area so that I could call her, and she picked up and I just go, ‘Hi mom, it's Lauren, you're on LEGO Masters here's Will.’ And I was handing the phone to Will.

Bryan:  And then he goes, ‘Hi, Margie,’ which is our mom's name, and they started talking.

Lauren:  They talked [for] like 15 minutes, cracking jokes. He's asking which one of us would get [in] more trouble or [for] funny stories about us, ‘Which is the favorite child?’ [laughs] And our mom handled it great. It was so funny. It didn't make it into the final cut, but that was one of our all-time favorite moments. He was great; he was hilarious. We always had so many laughs with him.

Bryan:  He was so funny.

LP:  Lastly, if you could give advice to future contestants on LEGO Masters, what would it be?

Bryan:  I'd say if there's season three of LEGO Masters [and] if it becomes a technical thing like this season did, learn Technic because that was something that wasn't our strong suit going into this season. Every episode we were forced to learn brand new things with Technic we had never imagined we would have to do. So I'd say really hone your Technic skills. That would be the biggest piece of advice.

Bryan:  Another thing is keep your stories short.

Bryan:  We'd have like the core of our story that was pretty concise, but we'd elaborate so much. It would have so many fun details and then, you're not going to see it on TV. So just really boil it down. 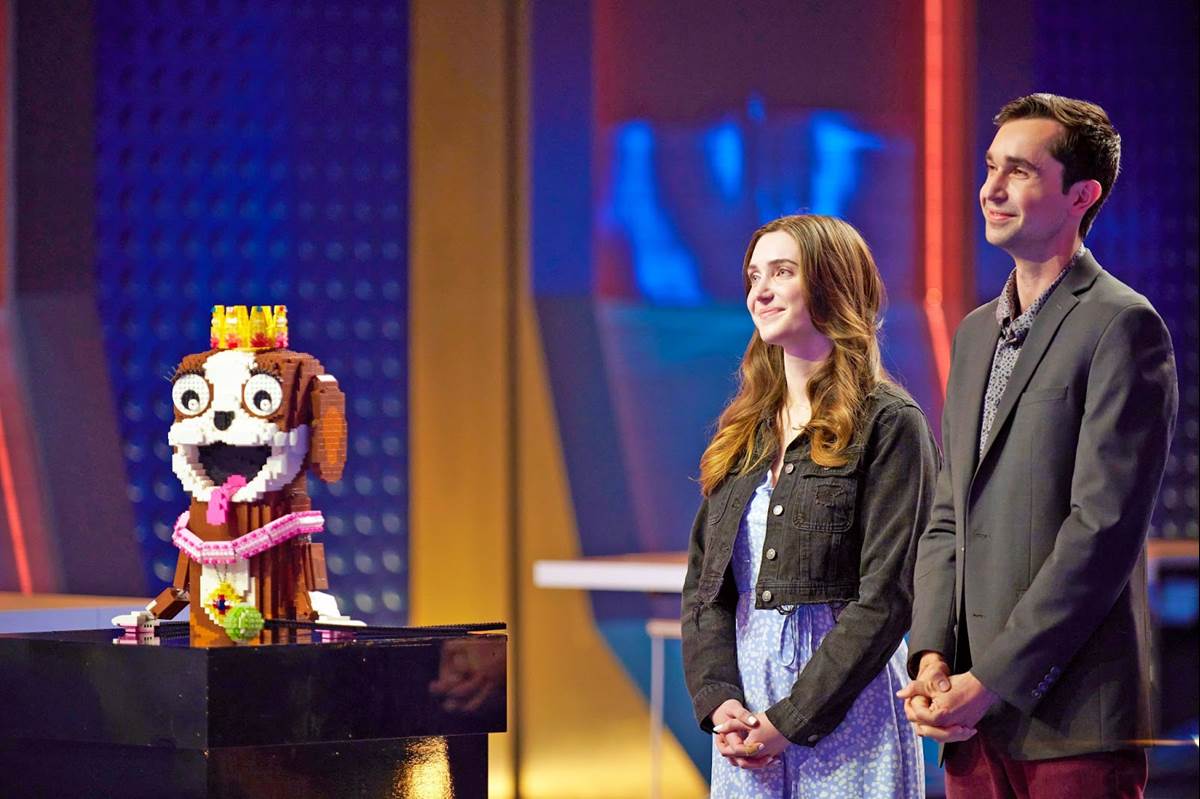