Nine Perfect Strangers is back with episode 4 “Brave New World”. Beginning with a flashback of Masha being shot in the parking garage, we see the health guru when she was a business executive and experience one of the reasons why she changed to a wellness goddess. Quickly the action is brought back to the dinner table at Tranquillum where her nine guests are waiting for Masha to answer Heather’s (Asher Keddie) question about whether they have been drugged.

Francis (Melissa McCarthy) adds her voice to the chorus of concern which Masha answers by assuring them all that the drugs are coming in micro doses. Sensing the unease in the room, Masha tells that nine that they are free to stop the dosing, and if they want to leave Tranquillum they may go.

Ben (Melvin Gregg) asks Masha point blank how crazy she is. The enigmatic guru retorts with

As the bombshell news wears off, Ben and Jessica (Samara Weaving) are discussing the events and the fact that Masha was not drugging either of them. Jessica convinces Ben that they should join the group.

Napoleon (Michael Shannon) has been against drugs his whole life. His worry about now consuming illicit narcotics is replaced by a more intimate moment with Heather. Away from the guests, we see how close the relationship between Yao (Manny Jacinto) and Masha has become. They discuss the threatening texts that Masha has received and wonder if a guest of the retreat is the one sending the messages. 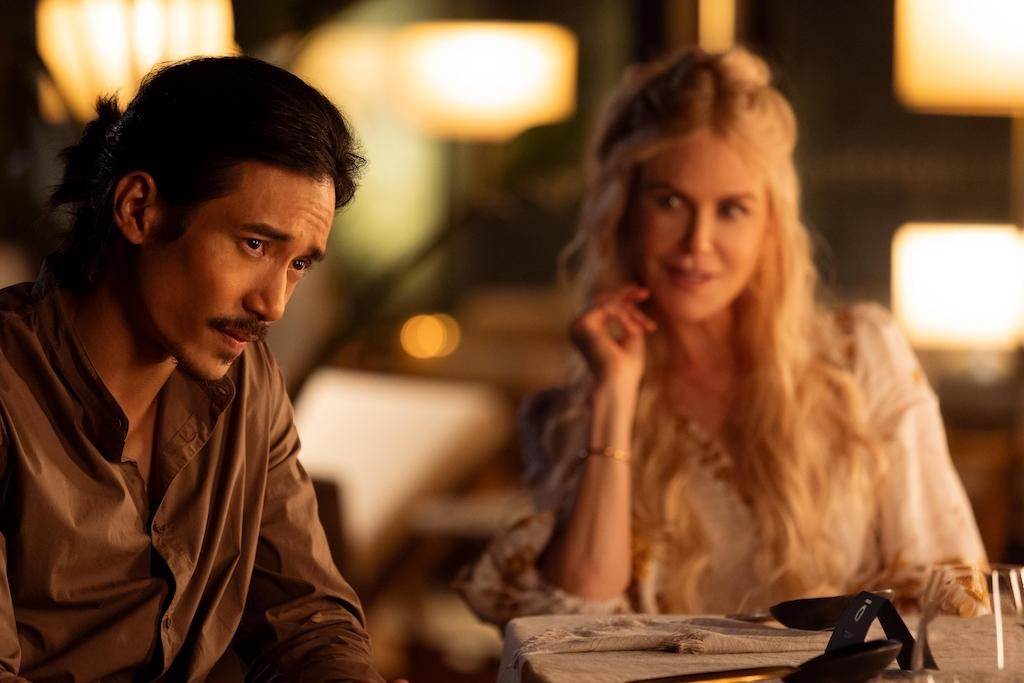 When Yao encounters Delilah (Tiffany Boone) later that evening, they discuss the threats to Masha, and he asks Delilah if she is the one making the threats. The night ends with Delilah denying the accusation, and the matter appears to be resolved.

The next morning Heather and Napoleon discuss the previous night's revelations. She assures her grieving husband that there was nothing that he could have done to have saved their son Zach. Prior to breakfast we see the precise means used in creating each guests’ smoothie with just the right measurement of drugs added to the liquid meal.

Napoleon is revitalized by his acceptance of the treatment and asks for all the drugs possible. Francis and Tony (Bobby Cannavale) talk about their comfort level with the treatment methods being used at Tranquillum. Encouragement from Francis keeps Tony in the program.

Today is Carmel’s (Regina Hall) turn to meet with Masha. Alone they discuss her violent tendencies, and Masha probes deep into the reasons for Carmel’s hostility and anger. Left by her husband for a younger woman, Carmel is forced to pick up the pieces of her shattered life. Alone, and with her kids living with their father and stepmother, Carmel is at her wits end.

In the sweat lodge Zoe (Grace Van Patten) and Lars (Luke Evans) build on their friendship. While Lars describes his breakup from his boyfriend, Zoe is adamant that her relationship with her brother Zach was not close. Lars is not believing a word and continues to push her about accepting what happened. Changing the subject, Zoe asks how Lars will report on his experience at Tranquillum. He admits to Zoe that as of right now he has no idea what to say about Tranquillum.

In a makeshift combat room, Masha leads the guests in their next exercise. Encouraging Francis to stay in her pain, she visualizes her ex-boyfriend in the form of the practice dummy and is given a wooden sword to attack the manifested image. Carmel is second and Masha uses the taunts of Carmel’s ex husband to help her unleash her anger. Attacking the dummy and tackling it to the ground, the other guests look on in worry and wonder.

Back in the sweat lodge, Tony is alone with his past misdeeds. Remembering a bar fight from years back, he is starting to come to terms with his own personal demons. Francis meets up with him and Tony describes how he killed a guy during a bar fight years ago.

Masha ends the night by toasting her guests and returning to her villa. The door is open, and signs of an intruder are all over the place. On the wall, is a message that Masha will not forget. ‘It’s good to die’ is written in large lettering on her walls.

Nine Perfect Strangers has had me on the edge of my seat because I genuinely don’t know what the endgame is for all the characters. This episode highlights the primal human need for care. The guests are at such a breaking point, that they are willing to forgo consent to being drugged because they are in such a desperate situation. Masha, thanks to Nicole Kidman’s brilliant performance, seems like a genuine person who wants to help. Can Masha be trusted?

Bobby Cannavale continues to shine as Tony. The layers are starting to be peeled back, and the Tony we see is a broken individual who has nowhere else to go and wants to change. Or does he? Is Tony hiding something deeper?

Stay tuned to find out.