It’s David Day at Monsters, Inc. as the whole company remembers a favorite co-worker from MIFT who met a tragic end in Shredder Shaft B four years ago. 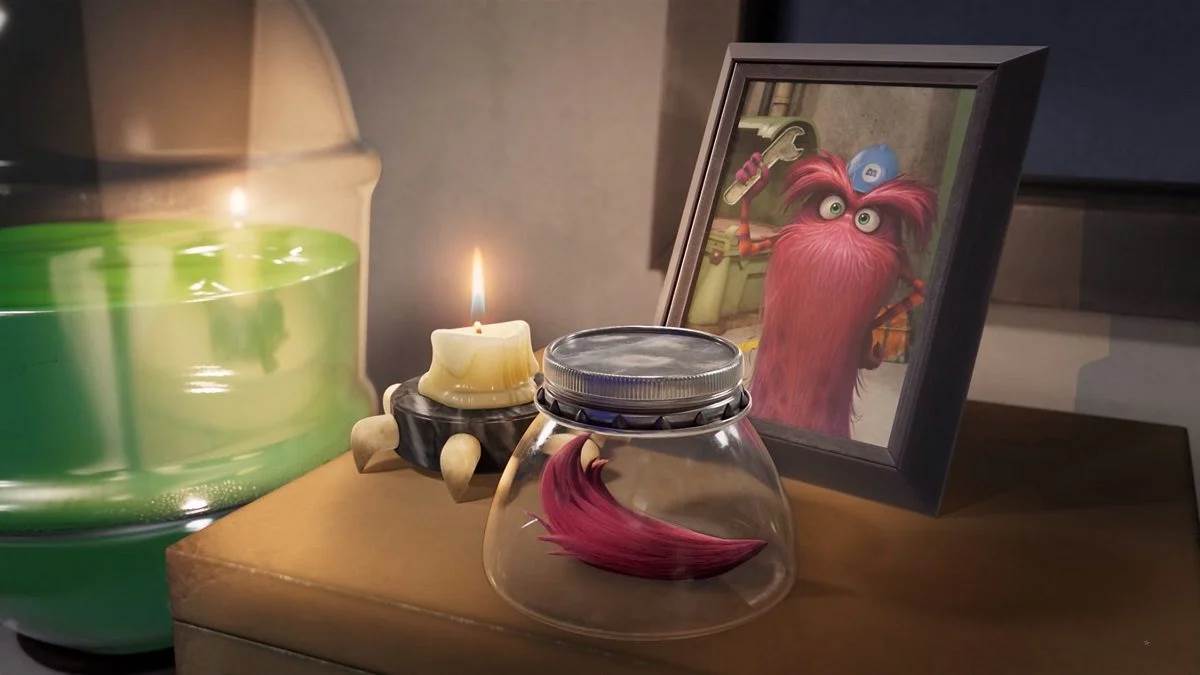 Convinced he’ll never become a jokester, Tylor has decided to become the best MIFTer that he can be, and decides to try and fit in with the rest of the group. Ready to embrace his fate, he decides to bring in donuts for the rest of the gang but shows up and the donuts are immediately burned (in the best gag of the episode, and maybe even two pieces of product placement) because “he” hated donuts.

Who? David! Today is David day at Monsters, Inc. David is a former MIFTer who met a tragic end with the shredder shaft, and today just happens to be the fourth anniversary of that incident. The team keeps a lock of his (perfect) hair in a jar next to a photo and candle. While everyone refers to him in the past tense, Val believes that he is still with them. As part of the tradition, and paying homage to David’s hair, the group goes to the salon to not get a haircut, because David never did.

While at the salon, Tylor hears stories and anecdotes about David and realizes he was the perfect MIFTer and asks questions about him, learning more about his honesty and devotion to the team and his work efforts. But the group can’t stay at the salon too long, they have so much to do, which presents Tylor with the opportunity to jump in and have the team see him be as good as David, so he volunteers to feed Roto, switch out canisters, and other tasks that everyone mentioned so that they can enjoy their David Day.

Back down at the MIFT office, Tylor is feeding Roto when he gets out of his cage and after a chase with Tylor, ends up eating that last bit of David’s hair. So not only is he chasing down Roto, he now his to cover his tracks and replace the hair too so the team thinks he’s as reliable as David was. As he is chasing down Roto, he comes upon Roze, who he sees has the same color hair as David, and tries to get a lock of her hair. She threatens to call security, and Tylor sees Roto in the tubes and runs off after him instead before getting stopped by Val, who takes him to David’s hallway lunch, where he sees the affinity that not only the MIFTers had for him, but the whole of Monsters, Inc.

During lunch, we learn more about what happened to David, and Duncan explains the finer details of how a shredder shaft works…almost like we’re going to see it again soon. Convenient since Tylor now knows that’s where he can find any other traces of David, like more of that hair that he needs to replace. He takes out that special maintenance vehicle we’ve seen in some prior episodes and heads deep to Shredder Shaft B, and very quickly finds more of David’s hair. Easy enough, until Tylor’s giant antlers get caught on the switch that powers up the shredder shaft, and we see David’s demise start to replay for Tylor.

Uncomfortably, this whole sequence is played out comedically when you, the viewer, knows what happened to David. As Tylor is about to go through the gears and end up like David, he throws his hard hat out into the mechanism and it spits it back out, hitting Tylor in the head and knocking him unconscious. After hearing echoes of Val, “he is still with us,” we see a silhouette of David come down from some heavenly gates saying some of his trademark phrases (and traffic rules). Tylor asks for advice, and is told to just be honest. He wakes up, and realizes after the hard hat hit him in the head, it fired back and landed on the lever, powering down the machine.

Back down at the MIFT office, Tylor has put Roto back in his cage, and Roze decided to give him some of her hair, but it is quickly noticed by the rest of the team that it’s not David’s hair and Roto coughs up the furball he had eaten. Tylor cracks and tells the truth about the whole day, with Fritz saying that David was honest and he can see that in Tylor. Turns out, he didn’t need to go through all that trouble though, because they actually had a full sack of David’s hair in a locker.

Mike’s Comedy Class is all about improv, saying the audience can call out anything and he can become it, but most of what he suggests are round. The class tosses out other suggestions, all of which are cubes. Mike quickly says he can’t work like this, and they don’t understand. It was only during Mike’s Comedy Class that I realized this is the only episode so far that Mike and Sulley don’t make an appearance.

Monsters at Work is now available on Disney+.