Yesterday was the big day a lot of Southern California theme park fans had been waiting for since the spring of 2020– the return of an Annual Pass-type program to the Disneyland Resort. After the recent announcements regarding the newly branded Magic Key, previously frequent guests have been counting down the days to when they could begin visiting Disneyland and Disney California Adventure again on a regular basis.

While many of those prospective Magic Key Holders opted to (or were forced to, due to prior engagement such as work or school) purchase their new passes remotely via the official Disneyland website, I decided to try my hand at buying a single-day parkhopper ticket in advance for Wednesday, August 25 and then upgrading that ticket– as advertised– to a Magic Key while visiting the resort. 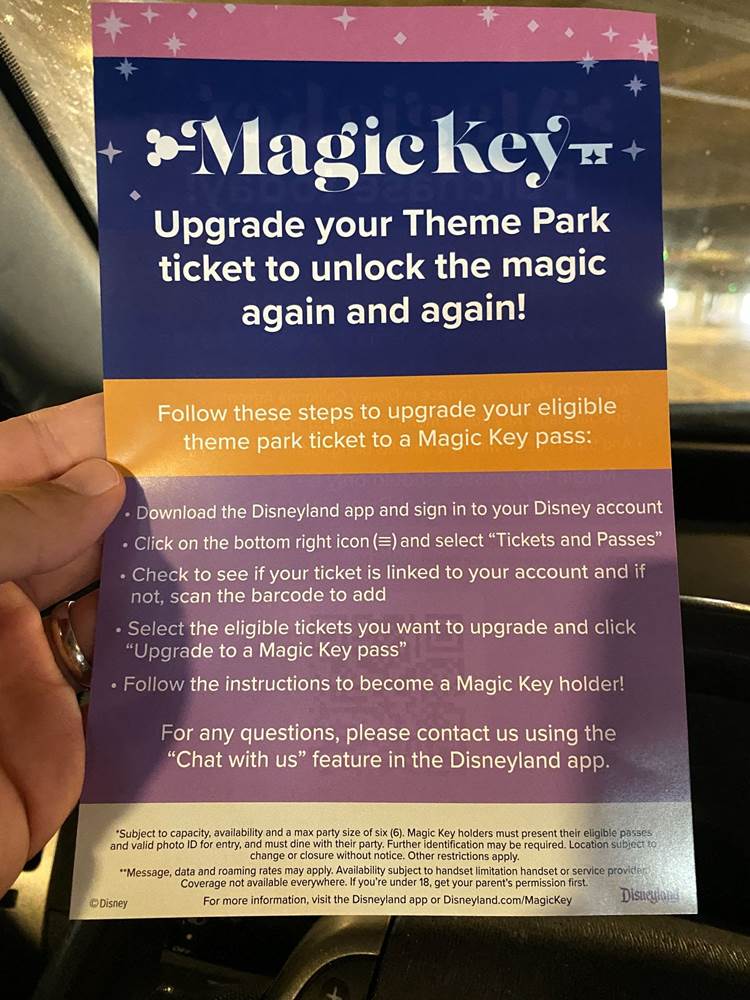 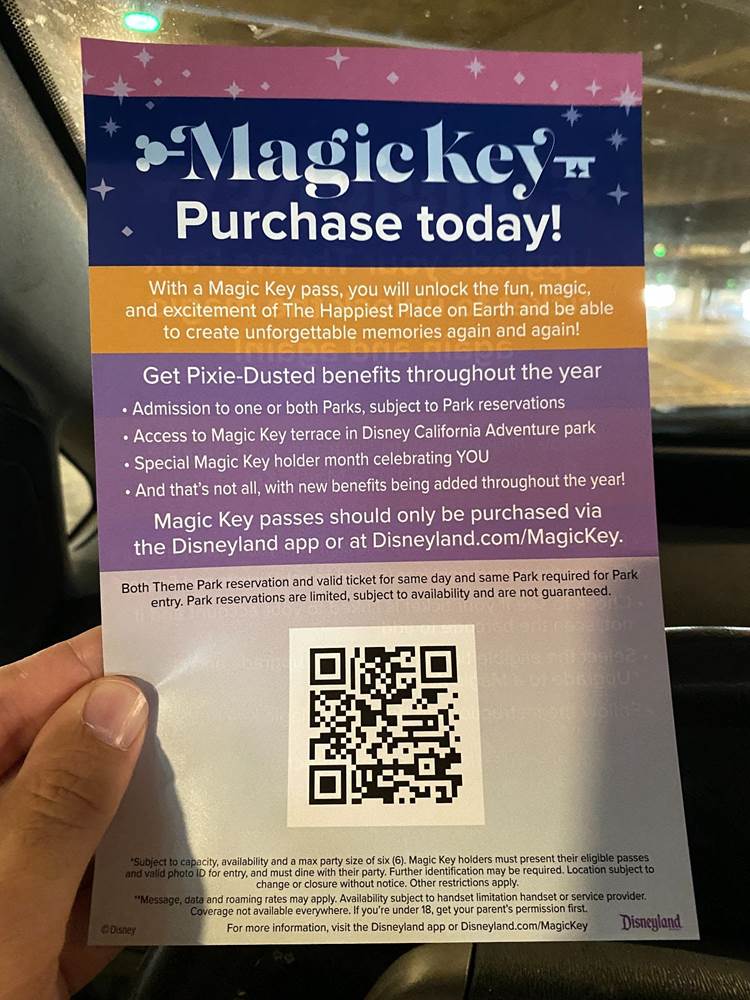 Upon arriving at the Mickey & Friends parking structure yesterday morning, I was handed the above two-sided flyer by the booth attendant. One side provided information on how to upgrade a theme park ticket to a Magic Key, and the other side displayed details about what benefits were included in the Magic Key itself. Unfortunately, in trying to follow the upgrade instructions right away as soon as I had parked, I found that the app on my iPhone wasn’t quite working as detailed on the flyer– I got through the first three steps but once selecting the eligible ticket, there was no button to “Upgrade to a Magic Key pass.”

What I was eventually able to figure out, thanks to the help of some of Laughing Place’s Twitter followers, was that current ticketholders had to first enter the park before the app would allow them to upgrade to a Magic Key. I was surprised to find that even Cast Members posted in the Disneyland Resort esplanade didn’t seem to be aware of this step in the process, as the one I asked simply told me to wait until the app eventually updated itself. Fortunately I took Twitter’s advice, stepped through the Disneyland main gate after having my ticket scanned, and was immediately able to upgrade, as evidenced by the above screenshots. The app applied the $159 I had spent on a single-day parkhopper ticket and gave me the option to purchase one of the four Magic Key tiers– Imagine Key, Enchant Key, Believe Key, and Dream Key. Choosing the Dream Key, my new total came to $1240 after the deduction.

I immediately received a confirmation, was asked to input some additional personal details such as my address and phone number for the new Magic Key account, and then I saw that my parkhopper had instantly been modified to the “Dream Key Pass” Magic Key in the “Tickets and Passes” section of the app, complete with scannable barcode for entry into the parks and a link to the “Access Calendar” blockout dates.

Sadly when I first attempted to make my six reservations for upcoming dates using my new Magic Key, the Disneyland website was having some difficulty, as you can see in the screenshot above. I assumed the system was being temporarily overwhelmed by new Passholders and took a break from the process. About 20 minutes later, I tried to make reservations again, and this time the website worked very smoothly. I was able to select six upcoming dates, one at a time (which was a tiny bit frustrating), and then choose which of the two theme parks in which I wanted to start each day. Once that was finished, I wanted to try out my new Magic Key discount, and found that the 15% off was automatically applied to a mobile order I placed for the Hungry Bear Restaurant in Critter Country. After I left the resort, I heard that other folks were having trouble applying their discounts to merchandise at points-of-sale around the parks and Downtown Disney District, but I haven’t tried that out yet. But for myself, once the dust had settled, I felt so ecstatic to be a Magic Key Holder that I couldn’t help but celebrate with Mickey, Minnie, and the Disneyland Band on Main Street, USA.

See how Mickey waves at me? Pretty sure he knows I’m a #MagicKey holder. #Disneyland pic.twitter.com/x4UUOUop6s

I know the process of purchasing a Magic Key was much more difficult and time-consuming for those who had to do it at home or elsewhere outside of the resort, so I was very appreciative of how streamlined it was once I had actually entered the park. Checking the website just now, I noticed that the wait time is down to a much more manageable 6 minutes. While it was pretty neat to become a Passholder again while actually inside Disneyland, for those who couldn’t be there I guess the lesson is sometimes it pays to wait until the next day.