Author Serena Valentino has taken the world by storm with her New York Times best-selling Disney Villains novels and it appears that the traditional novel format is just the beginning for these Villainous tales.

Valentino’s novels explore the backstories for Disney villains that readers know and love as well as introduce readers to new characters that operate behind the scenes of classic Disney plots. The novels seem to keep on coming with eight books having been released to date. The most recent novel is Cold Hearted (based on Lady Tremaine) which was released on July 6th. 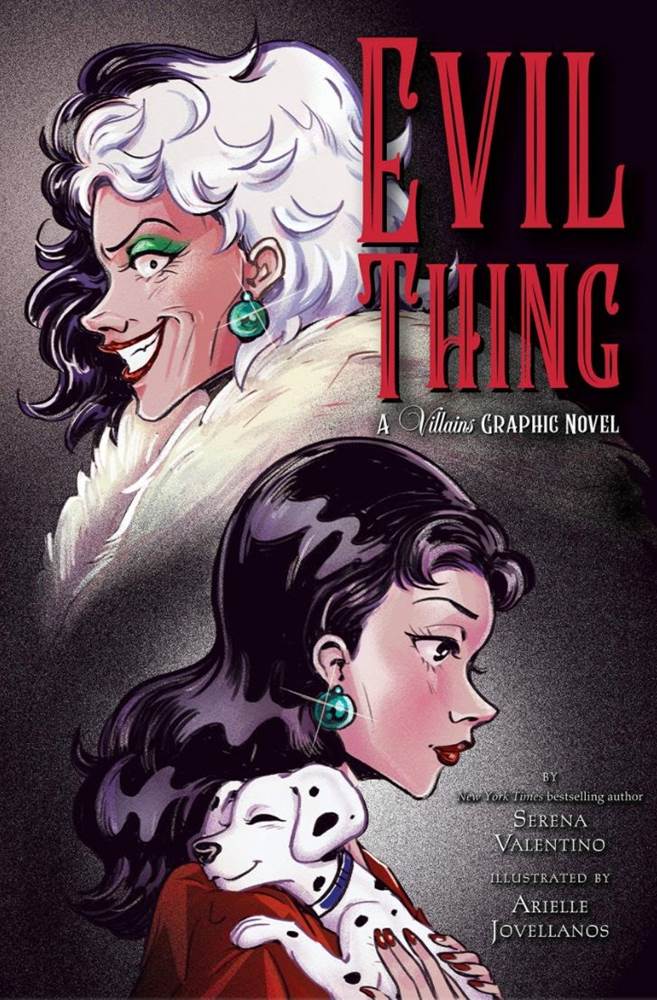 Despite the continued fanfare and support for the novels, at least one of the Villainous tales is also taking on a stunning new format.

Evil Thing, which is novel number seven in the Villains series lineup, has been splendidly transformed into a graphic novel.

Evil Thing is Cruella De Vil’s story told by none other than Cruella herself. With a swish of her fur coat and an appropriate amount of ‘darling!’, Cruella dramatically enters our hearts and minds in a complex and clever origin story of her own making. Before the car crash, before the dognapping, before furs became her only true love, there were best friends, lovers and daring dreams. Cruella bears all and in doing so reveals that nothing is as simple as black and white.

Evil Thing brought about a new flavor to the series while employing the most effective storytelling tools from Valentino’s repertoire – even before it became a graphic novel.

Although the graphic novel is based on the same story told in the traditional novel, Arielle Jovellanos brings Valentino’s darkly captivating world to life with beautiful and haunting illustrations. Janet Sung adds appropriate depth to the chilling tale with a minimalist color palette.

There is less written scene-setting in the graphic novel (I happen to love Valentino’s rich and inviting descriptions), however the images themselves add a new dimension to the story. Jovellanos beautifully translates Valentino’s characters with simple yet sophisticated illustrations. The style is reminiscent of graphic novels and comic books that I grew up with, adding an enticing nostalgia element to the story experience while still appealing to a modern audience.

Valentino preserves the first-person writing style in the graphic novel which maintains its appeal as possessing a deeply character-driven approach to the tale. It profoundly thrusts the reader into Cruella’s childhood and early experiences. Coupled with the illustrations, Valentino returns to her graphic novel roots while Jovellanos dances onto the Villains series stage. It is sure to leave fans begging for more graphic novel adaptations of our favorite Disney Villains.

The graphics also communicate story themes visually and powerfully. Valentino juxtaposes superficial happiness – wealth and status – with meaningful relationships. Cruella’s denial and distorted measure of ‘love’ is cause for appropriate angst throughout the story and we not only read about it but see it materialize with Jovellanos’ crisp, sharp and moving illustrations. The character exploration conducted in Evil Thing is unlike any Villains novel before it and now we can experience it in a whole new aesthetically engaging way.

The Evil Thing graphic novel is a must-have for fans and provides a welcome introduction to the series for those who may be more inclined to pick up a graphic novel than a traditional novel. It is set to be released on September 28th, darlings.