The first season of The Wonderful World of Mickey Mouse came to an end on August 25th with the 19th and 20th shorts of the introductory season on Disney+. Both shorts, “Once Upon an Apple” and “Game Night,” feature tons of Disney references for devoted fans to delight over. Here’s a detailed recap in case you missed any of them.

Once Upon an Apple

Mickey Mouse wakes up singing a 1980’s-infused song called “Giving the Love” as he goes out on the town to make smiles, which strengthen his heart. Among his clients are J. Thaddeus Toad from The Adventures of Ichabod and Mr. Toad… … And Cinderella, with Mickey replacing her glass slippers with glass boots. In a rapid-fire succession of cameos, Mickey also helps Horace Horsecollar and the Cheshire Cat. Passing an alleyway, we pass through the castle from Snow White and the Seven Dwarfs in which the Evil Queen disguised as an old peddler woman dips an apple in poison brew and then heads out to give it to Snow White. Stopped at a crossing, Mickey sees her and decides to help an elder cross the road. The Evil Queen is none too pleased and tries to get rid of Mickey by giving him one of the poisoned apples. He returns in a flash with a fresh pie and the queen takes a bite, after which Mickey reveals he used the apple she gave him to make it. The Evil Queen awakens in her bedchamber sometime later and returns to try and murder her step daughter, spying on the happy princess as she sings with the forest animals. The queen uses a crossbow and is about to fire a poisoned apple into Snow White’s singing mouth when Mickey surprises her with a cake and she misses. 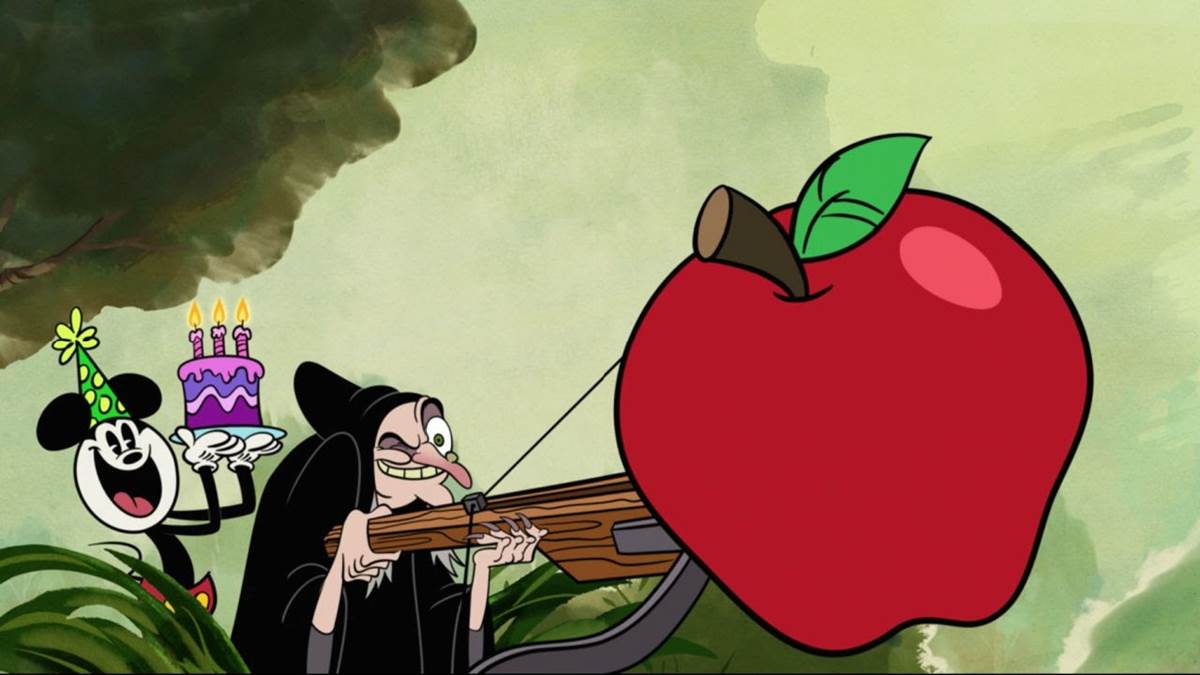 Poisoning another apple in the dungeon, Mickey appears and tries to help by adding pepper to what he assumes is soup. The queen sneezes and gets doused with the concoction. Next, she walks down the steps and slips because Mickey just waxed the floors. With Mickey causing so much trouble, the Evil Queen changes tactics, creating a poison banana and bringing it to Mickey, commanding that he eat it. Mickey squeezes a little too hard and the banana slips out of the peel and goes right down the Evil Queen’s throat. Pacing in her throne room, the Magic Mirror reveals that Snow White is no longer the fairest in the land, Mickey Mouse is. The Evil Queen then goes on a rampage of attempts to kill Mickey, including trying to push him off a bridge, bobbing for grenade apples, and chasing him down on his scooter from “Croissant de Triomphe.” This last attempt ends with the Evil Queen in traction. While she recuperates, the Magic Mirror sings the “Mickey Mouse Club March” and dons mouse ears, which does nothing to please the Evil Queen. Recuperated, the Evil Queen boobie traps Mickey’s house with poison apples that will bombard him when sits in his chair. Seeing Mickey go home, the Queen goes to the door to see if he’s dead, but he’s fine. When Mickey turns to face the door, the wires connected to the apples also turn and launch at the Evil Queen, stuffing her with poison apples. The Evil Queen awakens in a glass coffin in the forest that was meant for Snow White, telling Mickey Mouse that she hates him and sobbing because she will never be the fairest in the land. Mickey gets an idea and brings her to his house. 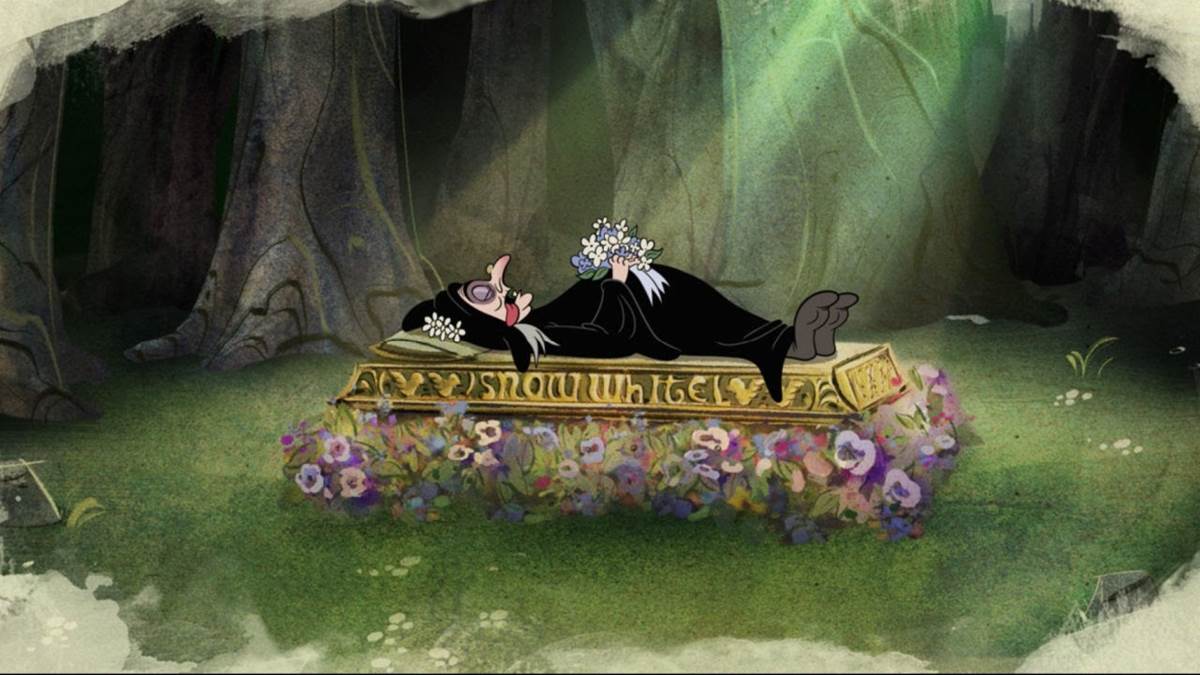 Assembling his neighbors around his porch, Mickey unveils the Evil Queen with a makeover, dressed as Snow White. The Magic Mirror cries happy tears, proclaiming her as “The fairest of them all.” Rats, skunks, rabid dogs and vulchers assemble to carry the Evil Queen on the back of a donkey off into the sunset while “Someday My Prince Will Come” plays. The Evil Queen smiles and her powerful energy blast overfeeds Mickey’s heart, his eyes turning to X’s as he falls down. Dragging their feet, Minnie, Donald, Daisy and Goofy head to Mickey Mouse’s house for game night, tired of playing the same game each week and complaining that Mickey always wins. But when they arrive, Mickey’s House unfolds to reveal a giant game board, a mix of Candyland, Mouse Trap, Labyrinth, Jenga, Chutes and Ladders, Tetris and more. 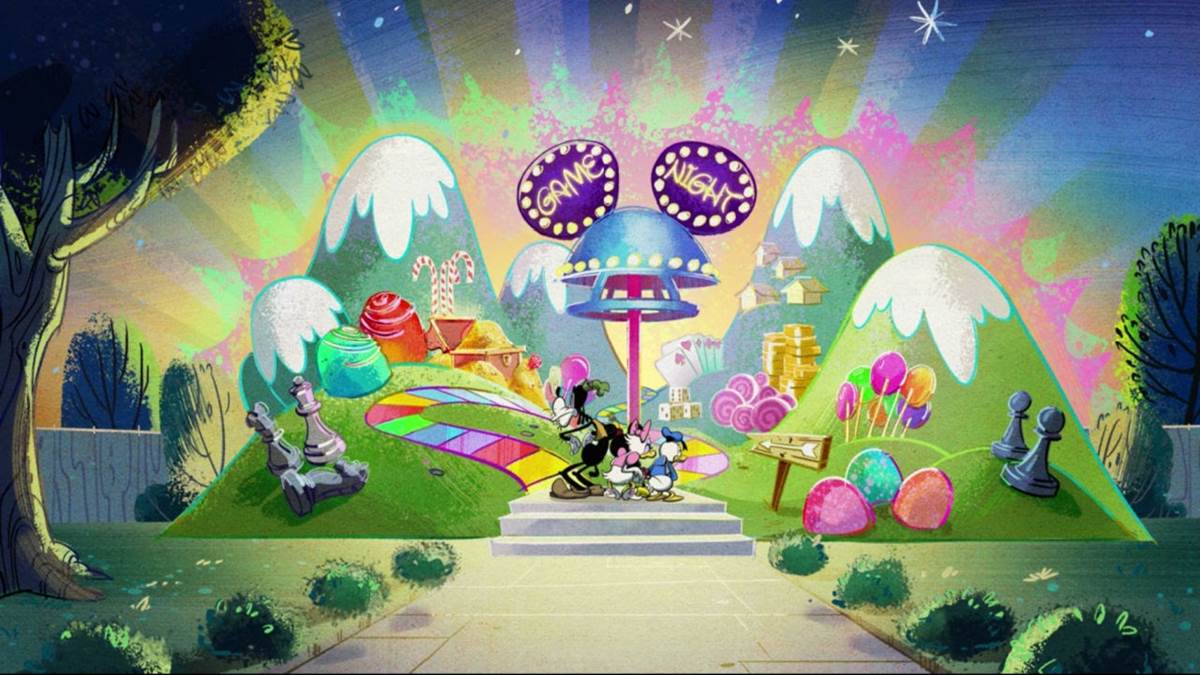 Rolling giant dice to determine how far they move, each player receives something nice on the space they land on, except for Donald. He gets a whole pie lobbed at his face. Moving walls slide towards the players at times and they have to match the shape to fit through them. Mickey does it perfectly by striking a familiar pose. 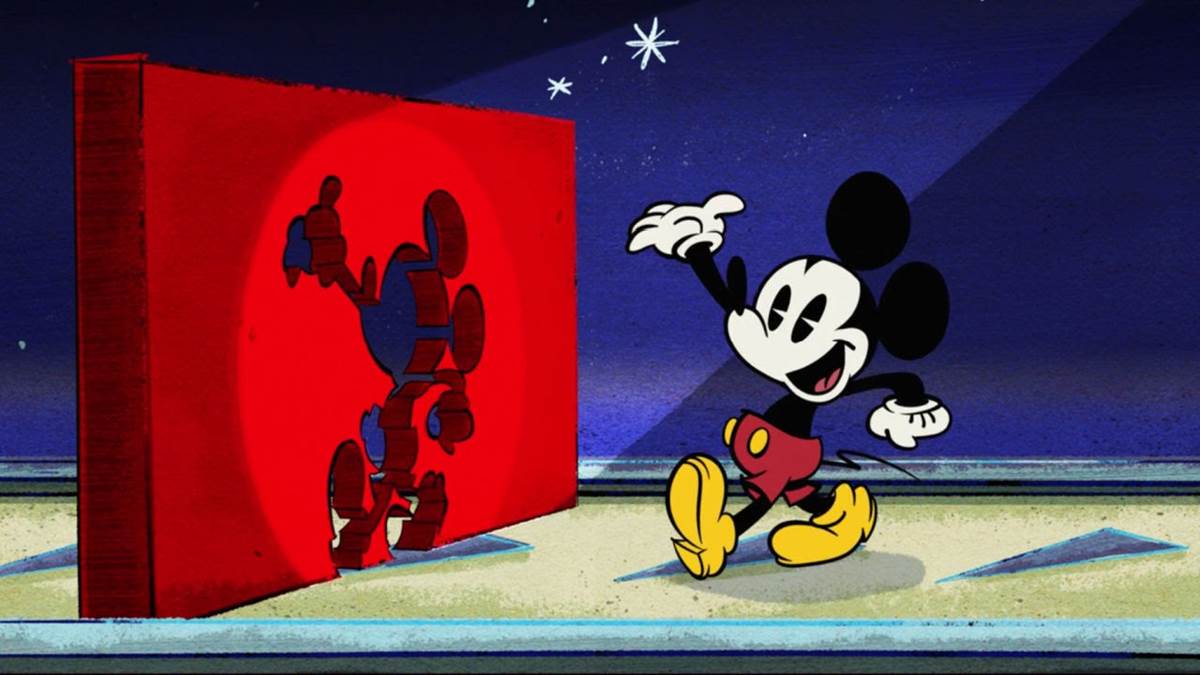 But when Donald’s turn comes, he gets an impossibly small couch-shaped hole that he gets stuck in, met on the other side by a pie to the face. Picking cards, Mickey gets a car, Minnie gets a house, Donald gets an onslaught of pies to his face. 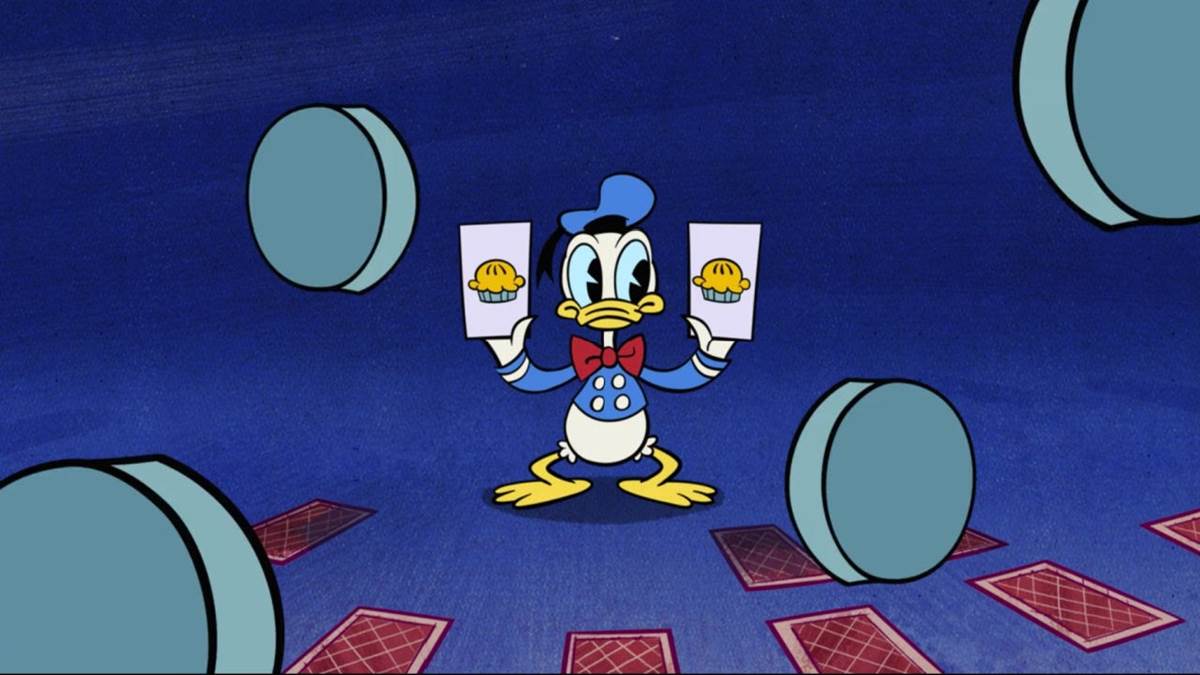 Making it through the small hole again, Donald is relieved to not have a pie to his face, only to find that a giant pie is in the place where he lands. By this point, Donald Duck is ready to call it quits, but Mickey points out that the end of the game is just up ahead and when one player crosses the finish line, Mickey’s house will go back to normal. But just then, metallic pig chefs rise up around the cliffs and begin hurtling pies at all the players. With Donald already having had his share of pies, he somehow dodges them all. Goofy, Minnie and Daisy are the first to get knocked off the board, with Goofy eager to watch Mickey and Donald keep playing. Mickey is the next casualty, hanging on to the side of a cliff. Donald is about to reach out and pull Mickey back up, but when Mickey mentions to Donald that he could win the game, he suddenly has visions of glory. After crossing the finish line in his mind, Donald flashes back to Mickey Mouse’s life, but with the duck in his shoes. From his first appearance in Steamboat Willie… …To this iconic tribute at Disneyland. Walt Disney’s voice begins to play from The Disneyland Story with one of his most famous quotes of all time: “I only hope that we never lose sight of one thing, that it was all started by… …A DUCK!” It’s Donald’s voice coming out of a still image of Walt Disney with a hinged mouth. 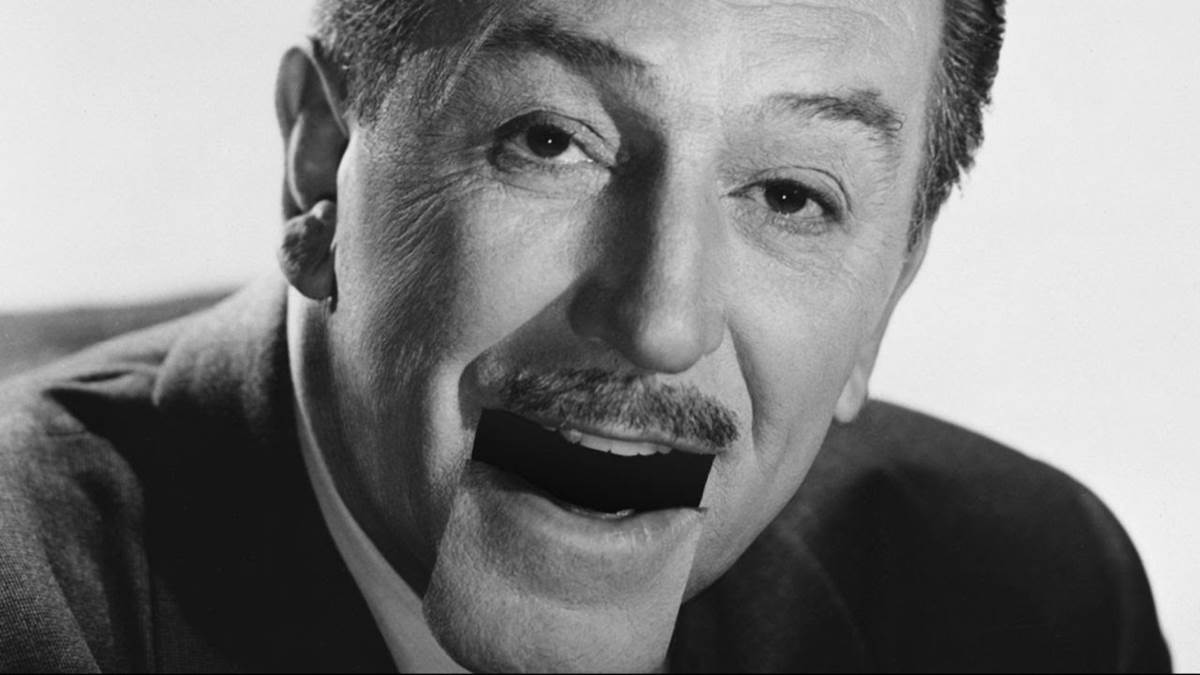 Back to reality, Donald realizes that it’s Mickey who is meant to win and he returns to his lifelong pal, pulling Mickey back up and sacrificing himself into a barrage of pies. 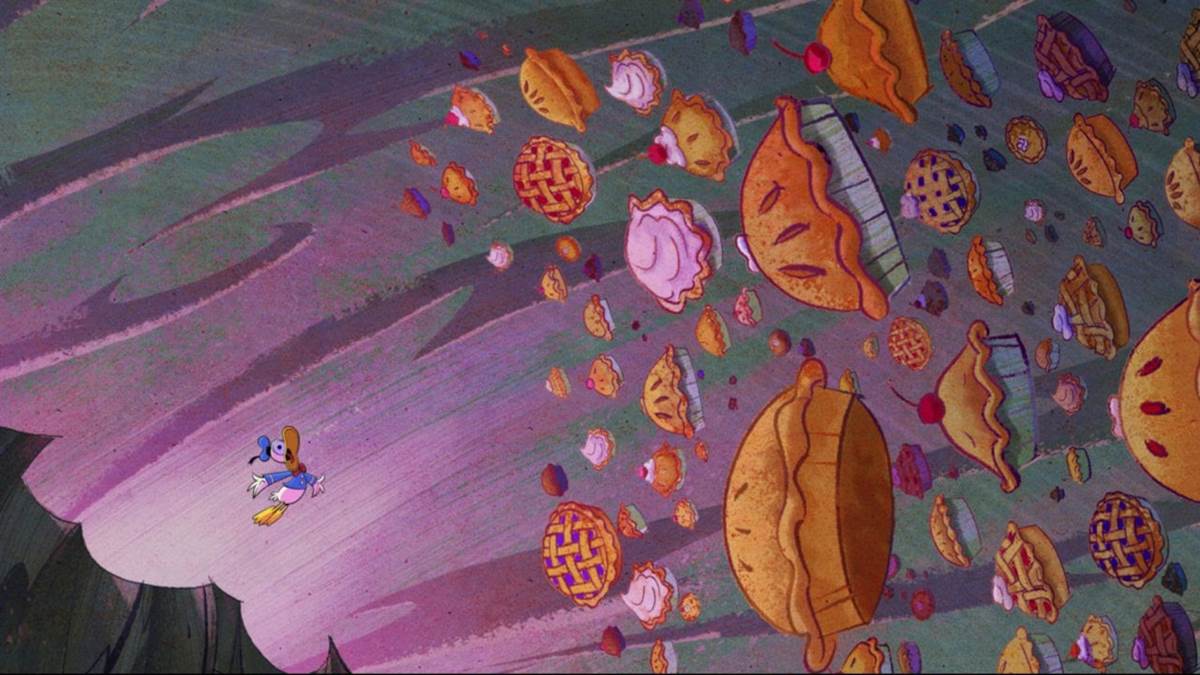 Mickey slides across the finish line and the game is over, the magical board folding back up into the Earth as Mickey’s house unfolds in its place. Mickey, Minnie, Goofy and Daisy are all in the backyard celebrating when they realize Donald’s not there. He steps out of Mickey’s house, pie in hand, and hurtles it at the night’s game master.