In the first episode of this new series, titled “The First Game,” Eli Manning takes us all the way back to the very beginning of the sport. Eli heads to New Jersey to look into the story of the very first college football game, played between Rutgers and Princeton. The episode opens with a familiar gag – Peyton Manning talking to the host of the new show following the format he pioneered for ESPN+. This time around though, it has a little extra meaning to it because the new host is his younger brother. The chemistry between these two is effortless, as you might expect with brothers, and they throw some chuckle-worthy jabs at each other.

After introducing his new show, Eli explains that he is going to be looking into the start of college football. He tells the story of the two cannons that started a dispute between Princeton and Rutgers and led to the first ever college football game.

Eli drives from Princeton to Rutgers to meet with comedian and New Jersey native Jon Stewart. After some information about what that first game looked like, they take a trip to the site of the first game, located on the main campus of Rutgers University. Turns out, the field on which the game was played has been turned into a parking lot.

After they line the “field,” we see some footage of John Herbert, a member of the original Rutgers team, discussing the story of the game. He explains that there were 25 players on each team, a big difference from the current 11-on-11 game. He also explained that they planned to play three games, one at Rutgers, one at Princeton and a third at a neutral site.

Eli then takes some time to talk to Stewart about his history with football and his fandom of the New York Giants. After some jokes about New Jersey, they then get back into the game by looking at some images from the first game. The art they share features players in dress clothes seemingly in a constant scrum. 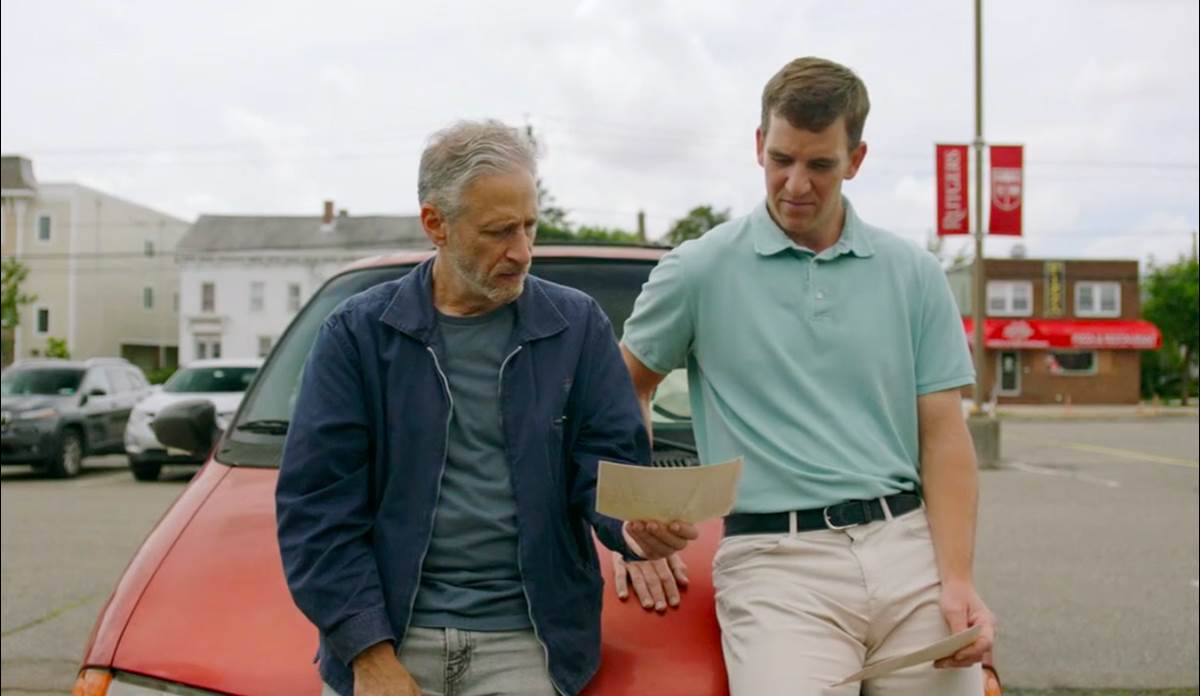 Eli shares a description of the first game from the then Rutgers newspaper, which likened the sport to soccer. That leads to a conversation about Stewart’s time as a college soccer player. They then get dressed in period-appropriate garb and test out their kicking abilities with a ball similar to what they used in that first game. Eli makes the best joke of the episode by telling Stewart not to worry about hitting a car because Peyton is his brother, so naturally he has more insurance than anyone.

They then discuss an incident that took place in the first game, in which a player was tackled through a fence and knocked unconscious. Eli and Stewart reenact the play, with Stewart tackling Eli through their own fence. Stewart then completes the story by getting water from a horse trough and dumping it on Eli’s head, which was done to revive the player in the first game.

The two of them are then joined by former Rutgers player Marco Battaglia to celebrate the birthday of football, even if it’s not actually the right date. The episode then comes to a close with a montage of how football has changed over the years.

This first episode of Eli’s Places was a great start to the new series. It’s certainly not breaking any new ground, as it almost feels as though it could have been another episode of Peyton’s Places, but it is also just as informative and entertaining as any installment of its predecessors. Eli doesn’t quite have the comedy chops of his brother, but he can certainly carry this show.