“I grew up a huge fan of the big promotions and then inevitably would end up going to one of these small things in and around the South,” said Michael Waldron, creator, writer, and executive producer of Heels. He also worked on Marvel Studios’ Loki and the upcoming film Doctor Strange and the Multiverse of Madness. The Starz wrestling drama tells the story of two brothers in a small town in Georgia who fight over their father’s family-owned wrestling promotion. “The level of ambition and the love is no different than what you see in Monday Night Raw. These people are as dedicated to their craft as the people who are making millions of dollars doing it, and it’s not just the wrestlers. It’s their families and it’s the people behind the scenes.” The cast and creative team gathered together virtually at the TCA Summer Press Tour to talk about the show, which is already a hit with critics. 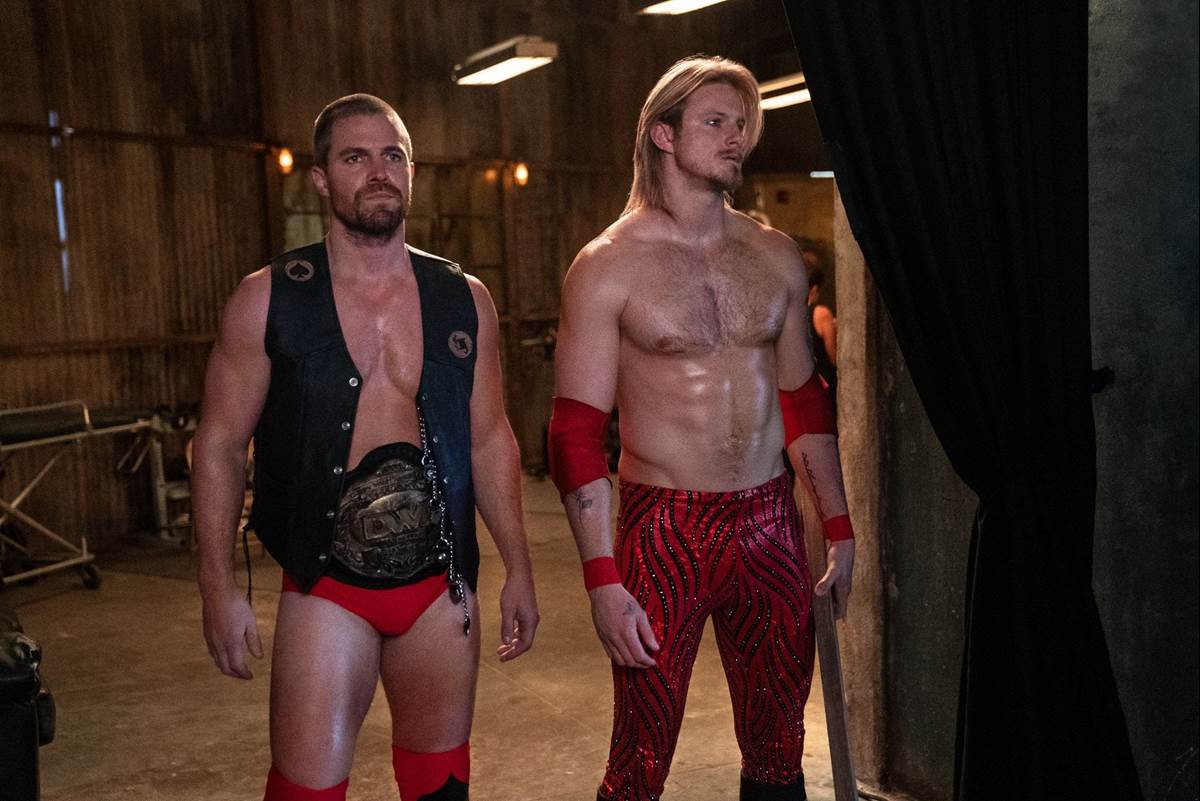 Star Stephen Amell is no stranger to professional wrestling, leveraging his success from The CW’s Arrow into fighting in the ring for both WWE and AEW. “It was certainly helpful to be able to reach out to people that I've met in the world of professional wrestling, Cody Rhodes, Kenny Omega, just a laundry list of guys that were very, very helpful,” the actor shared about preparing for his role as Jack Spade. “To say nothing of Luke Hawx, who was our wrestling consultant on the show and I think plays a character in the Florida Wrestling Dystopia later on in the season. It was invaluable to be able to talk to those guys about the basic things, like where would we set up the video footage in the gorilla position?… It was invaluable to be able to reach out to those guys and they were extremely helpful throughout the first season of the show.”

Alexander Ludwig has transitioned from child and teen star in films like Race to Witch Mountain and The Hunger Games to mature, adult roles. In Heels, he plays Amell’s brother Ace. “A lot of us didn’t have as much wrestling experience as, say, Stephen might have had,” Ludwig confessed. “We were immediately in training with a guy named Chavo Guerrero, who comes from a very prolific wrestling family. Pretty quickly, we all realized just how much athleticism goes into this sport. My respect for the men and women that do this has grown just exponentially since we've been training for this.” He added that the stunts, for the most part, are performed by the actors, which required a lot of trust between the cast.

Heels also tackles the tougher barriers to entry for women in wrestling through the character of Crystal Tyler, played by Kelli Berglund (Lab Rats, The Goldbergs). “We meet her in circumstances that aren't great and we immediately want to root for her,” Berglund said about the likeability of her character. “We start to learn what Crystal wants and she's not so outward about it at first. But as we go on, we learn that people have more respect for her. She does know what she's talking about and she knows that and almost doesn't necessarily need the validation of everyone else. She just wants to be recognized for something she's good at and something that she loves, she just wants to succeed. All these characters have a dream, and especially with the way that Crystal is treated, we want to see that happen for her.”

That shared dream of reaching the peak of success in wrestling is shared by most of the main characters in Heels and it’s one that rarely comes true for anyone. “Can everyone have the same opportunity?” Showrunner, writer, executive producer, and cast member Mike O’Malley proposed. “Can everybody have the opportunity to be the star? Does it happen on the same timeline?” That’s the main conflict between brothers Jake and Ace and many of the characters on Heels.

Heels is currently in the middle of its first season on Starz, available through cable and live TV streaming services and as a standalone subscription. The season finale debuts on October 10th.