This past Tuesday, FOX’s hit reality competition series LEGO Masters wrapped up its second season with the reveal of the winners and two teams of runners-up. And earlier this week, I had the opportunity to speak with all three teams who competed in the finale. The third-place partnership of twin brothers Caleb & Jacob will be the first of these interviews presented here on LaughingPlace.com, with the other two teams’ conversations coming up next week. 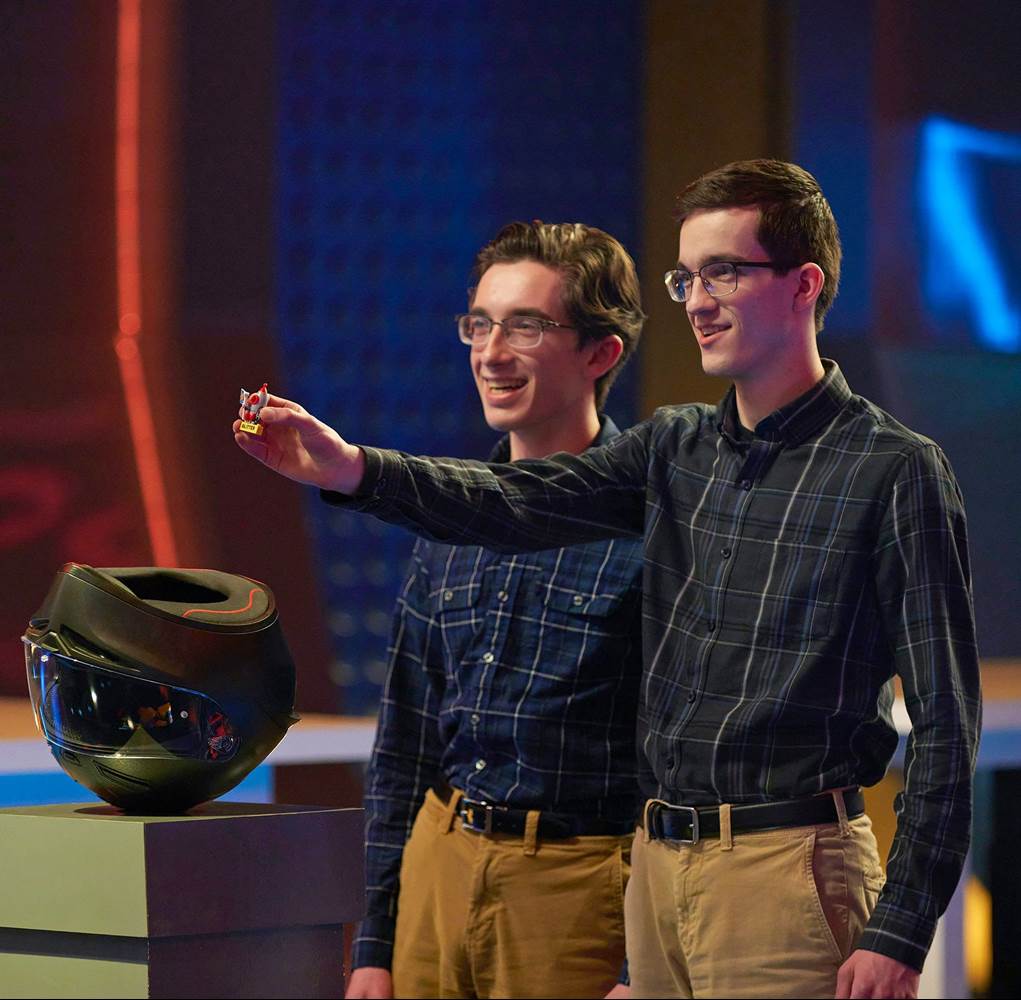 Mike Celestino, Laughing Place:  What was your history with LEGO prior to being on LEGO Masters?

Caleb:  It's hard to imagine a point in our lives where there wasn't LEGO. I had been going through an old photo album to try to figure out exactly where it started, and I found a picture of us at age one and a half with a larger version of a plastic building block in our hands. So it has almost always been a part of our lives.

Jacob:  A pretty large chunk of our lives. And then obviously we progressed down to the normal bricks by around four or five, right Cale? From there on it was just learning, playing, having fun with it as we went. And then eventually Caleb started presenting at conventions and stuff like that, which is really where we got our name out there. And that's what eventually landed us on LEGO Masters.

LP:  Once you got to that point and showed up on the set, what ended up being your favorite part of that whole experience?

Caleb:  The best part of the show is just meeting all these wonderful like-minded LEGO nerds and really bonding with them, because it's a friendly group of people. Yes, it's a competition– we all want to win. But at the end of the day, we were going off set and we were still talking about LEGO together, sharing techniques, sharing our love for the hobby. It was just so positive. We left the show with 22 new best friends.

Jacob:  Another great thing for me and Caleb was just the fact that we have both been off to college, so obviously we're not interacting as much– totally different schools, four hours apart. So that made things difficult. This was our ‘get back together, bring back the good old days when we played together as kids.’ It was great to be back building with my bro like we just did at home in our basement, years before. 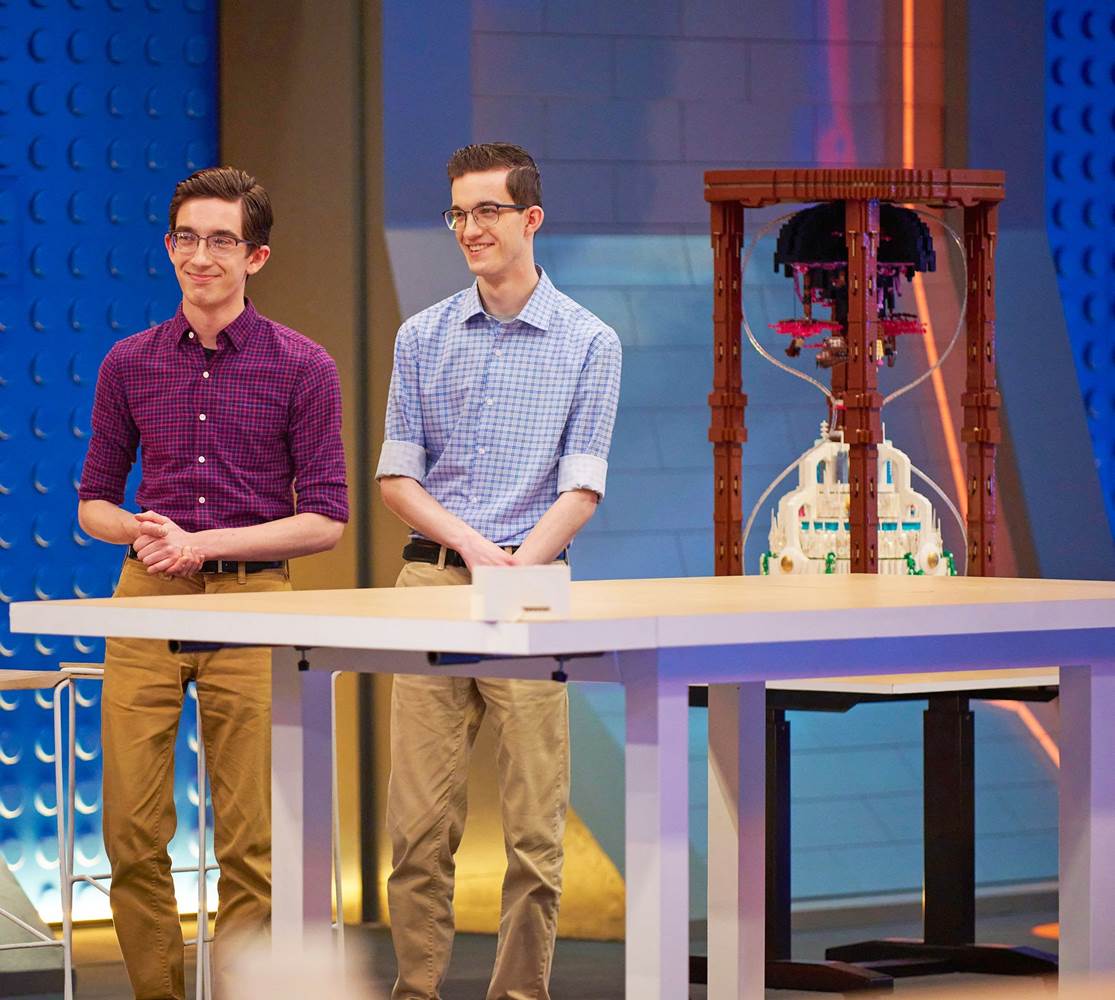 LP:  Congratulations on coming in third place overall. I was so impressed with all of your builds, but if you had this final challenge to approach again, what might you do differently?

Jacob:  The one thing that we noticed early on with our build is that we had confined ourselves to a small area. It's hard to gauge what you can accomplish with 24 hours. We didn't want to go too big, but we ended up going a little too small, probably, in the shape of the hourglass. That really confined how much more we could do inside, so we had to focus more on those smaller details, making it more outwardly visually appealing.

Caleb:  I wish we had incorporated lights a little bit better too, just because, again, we had a small space to work within and it was hard to get the wiring just right to make it really pop as much as, say, Mark and Steven's build. [They] really went all out with the lighting.

LP:  Speaking of Mark and Steven, you guys won the title of the Castle Bros from them. Tell me a little bit about that rivalry between you guys that ran through the whole season and how that was spurred on by your relationship with host Will Arnett.

Caleb:  [By] the end of the show, we had a fantastic relationship with Will. I think that really started kicking off probably around episode four or five. And one of Will's favorite things to do is to stir up a little drama, so it is definitely Will who started the rivalry between the brothers, and we're so glad he did because it was the funniest running joke. We would tease each other off-camera and it was so great, because Mark and Steven have a lot in common [with us]. We're roughly the same age, brothers who grew up building castles together, so it was really fun to play out this fake drama. It was relaxing, almost. It sounds ridiculous to yell at somebody across set, just to get some of the pressure off and not take ourselves too seriously. They were great guys– so much fun to have on set and to have this really ridiculous banter with.

Jacob:  The other running joke became the Sunshine Wagon. At every check-in, Will would pause and be like, ‘Let's play that clip again of Sunshine Wagon driving off [the table]. It was the one thing guaranteed when we had check-ins. 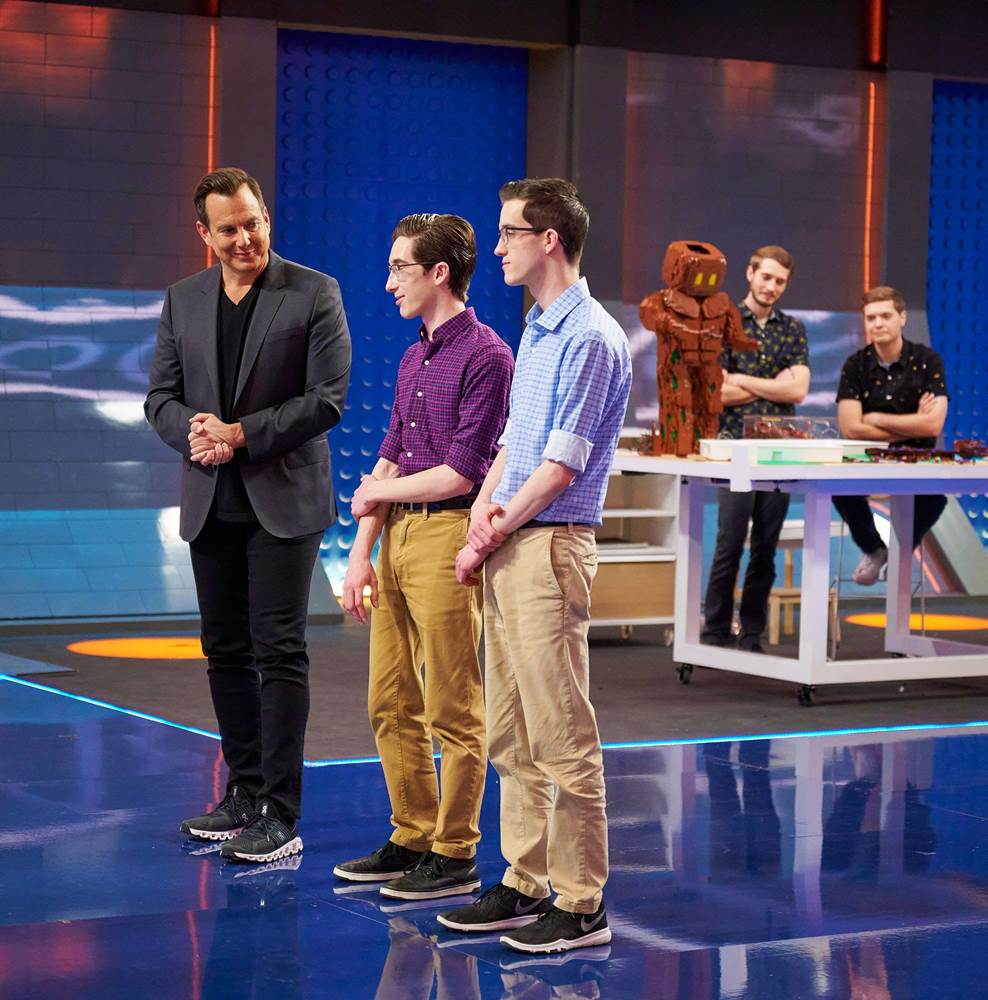 LP:  Did you guys have any particular highlights in your interactions with judges Amy and Jamie, and did you learn anything from them throughout this experience that will stick with you?

Caleb:  It's pretty easy to choose a highlight: Jamie called our episode 11 build the best build, perhaps of the entire season. That felt amazing because Amy and Jamie are people I've looked up to for years. They have my dream job, Lead Designers for the LEGO group. They were so awesome to have on set. They really wanted everyone to succeed and they encouraged us to just go crazy. They really loved our wild ideas, starting with “Make and Shake” when we incorporated rubber tires into our shock-absorbing base. Jamie was almost giddy with joy that someone was trying something so ridiculous, even if it didn't quite work out the way we wanted it to. He said, ‘That is the spirit of this show. If you have another idea like that, go with it.’ It was so cool to see, and I loved them encouraging us to think outside the box and really be imaginative and creative while we were on the show.

Jacob:  They really just encouraged us, and we stuck with that mentality. We developed crazy stories, and we also liked to take those risks, so we incorporated things like that. They really encouraged the storytelling and thinking about what's behind the build other than just placing the bricks down.

LP:  Beyond the “Castle Cliffhanger” episode that got you that very high praise from the judges, was there another challenge that you felt you really succeeded at? Which one of the others did you like the most?

Caleb:  Obviously episode nine is a clear choice, but I would really like to highlight our “One Hanging Brick”– our floating island build. That was crazy because instead of having one floating thing, we decided to have four floating islands connected to our brick. I think that was a really big, early success for Jacob and I.

Jacob:  That's also where Caleb and I were, for the first time in the whole show, totally in sync. Everything was coming together. That build was the same energy we had going into the episode 11 build. Our best builds were just where we were relaxed, totally in sync and just having fun. 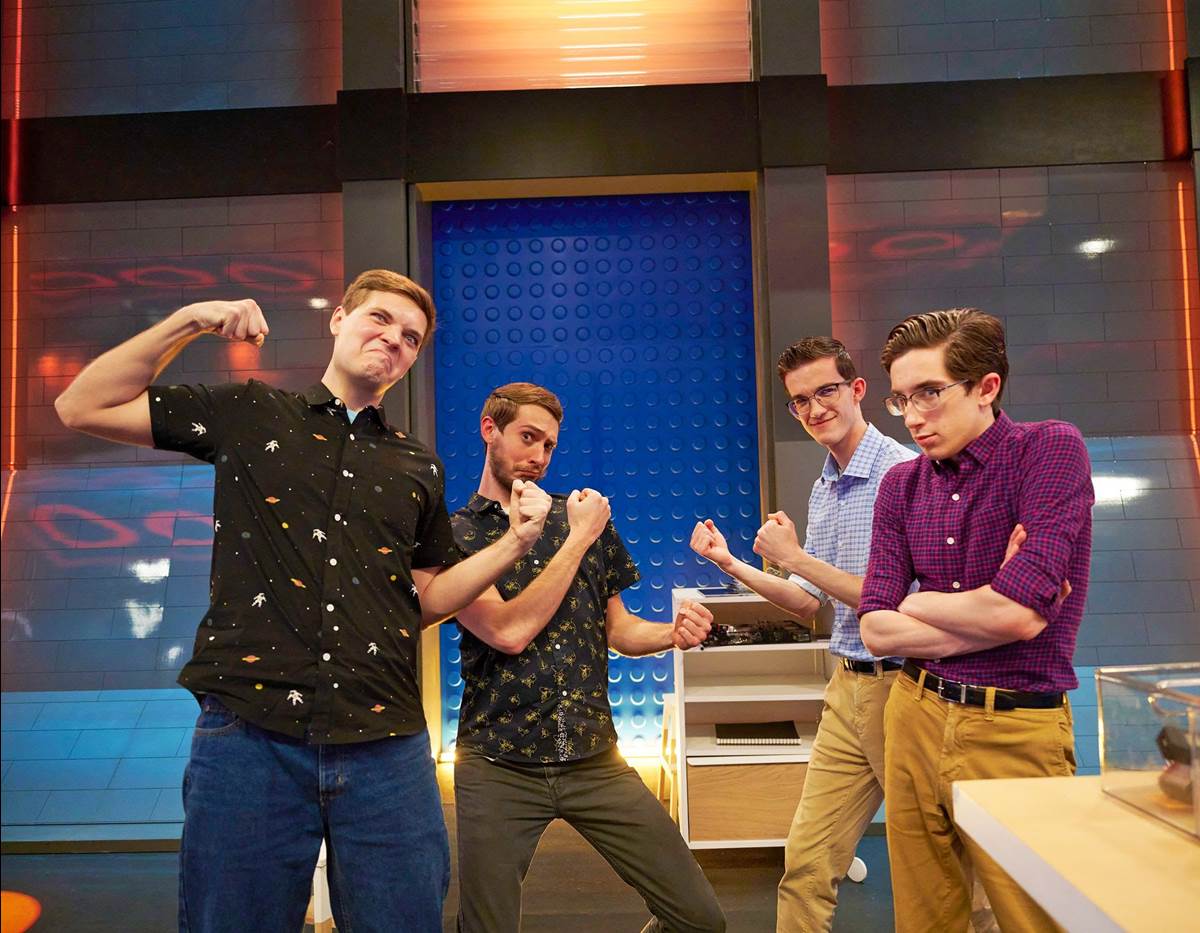 LP:  Lastly, if you could give advice to any future contestants on LEGO Masters, what would it be?

Caleb:  Get ready. Train physically, emotionally, and mentally because it is a wild ride and you never know what's going to get thrown your way. It was a shock to us when we got there and we had a ton of technical challenges on the show, so be prepared to diversify your LEGO portfolio because the challenge masters are very creative people. They will find a way to make you build something that you've never even dreamed of building.

Jacob:  You can watch all the previous seasons and then come up with something new and surprising so you can train. Learn the basics, learn everything. Just have fun. Don't take yourself too seriously. Just enjoy the time there. It's cool enough to be on the show. This was our mentality. It's just like, ‘We made it here. Let's enjoy this.’ 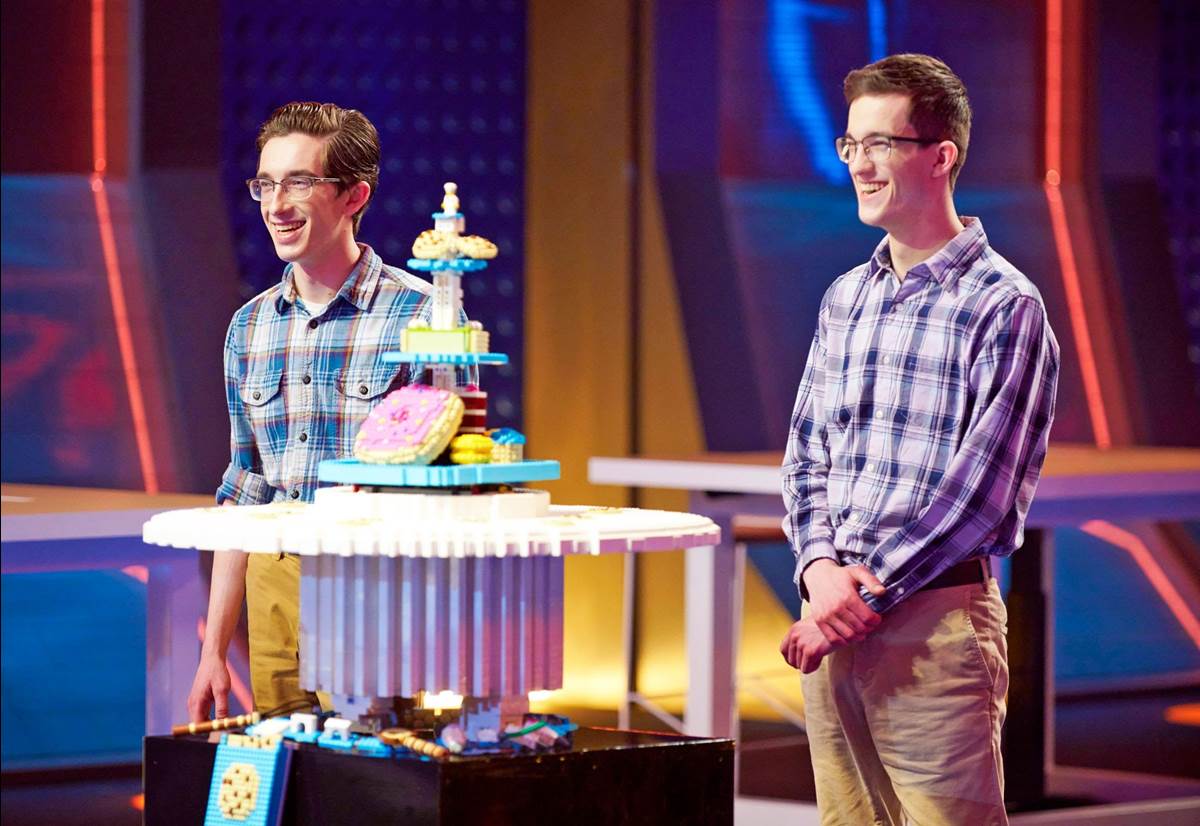 LEGO Masters is available to stream on Hulu.