Photographer Michael Yamashita recounted tales of two thrilling assignments for National Geographic during the Nat Geo Live event “Echoes of the Silk Road” on Thursday, September 16th. In his first in-person public speaking engagement since February 2020, the New Jersey native started by explaining that this event, held at the Blackhawk Museum in the California Bay Area, was a bit of a homecoming as he was born in San Francisco and had extended family in the audience of the sold-out presentation. While his 40-year partnership with National Geographic has taken Michael Yamashita to many exciting places, as you’re about to see, nothing could quite compare to retracing the steps of two legendary explorers: Marco Polo and Zheng He. 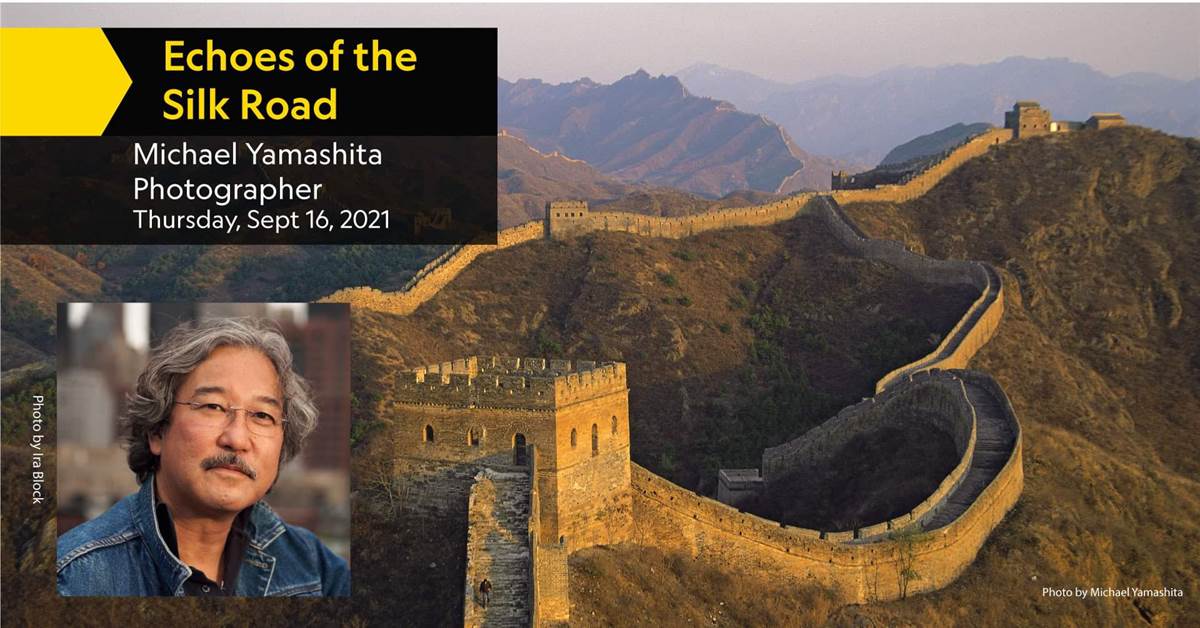 Published across the May, June and July 2001 issues of National Geographic magazine, “The Adventures of Marco Polo” was an 82-page story by Mike Edwards with photos by Michael Yamashita, who started his presentation by sharing the article’s origins. Partially in response to a book by Francis O’Donnell called Did Marco Polo Go to China?, Michael Yamashita set off to retrace the steps of the famous Venitian explorer who, at the age of 17, journeyed along the Silk Road trade route and later recounted his journey in Livres des Merveilles du Monde (Marvels of the World, aka The Travels).

Michael Yamashita took the audience along with him through a slideshow of amazing photographs that accompanied the article, including a few bloopers. As a professional photographer, he described his job as “Getting paid to be lucky.” One humorous anecdote came from the start of the trip in Venice, where he wanted to photograph the port that Marco Polo sailed out of in a way that had never been done before. Standing on a ladder in the road, he hoped to catch a modern cruise ship pulling into port, but the ship was late and he was almost ordered to stop by local authorities. As the ship finally pulled in, he clicked away only to find that his photos were full of blurred birds in flight, startled by the loud horn. Years later, while back in Venice, he was surprised to find this photo for sale on t-shirts at tourist shops.

Traveling through Afghanistan, Iraq, Iran and China in 1999 and 2000, Michael Yamashita felt like he was visiting a world largely unchanged since Marco Polo passed through in the 1300s. With the live event just weeks after the Taliban has reclaimed control of Afghanistan, many of the areas he photographed in these countries have been destroyed by wars. He also recounted how he snuck some of the photos that were published, with a minder (a government-assigned guide) telling him what not to do. In Iran, he got permission to climb a minaret so long as he didn’t take photos, but he beat his guide to the top and photographed a medieval city that was still inhabited as it had been for centuries.

Meeting descendants of the royal families Marco Polo recalled in his book, Michael Yamashita quickly became convinced that Marco Polo’s tales were real and not merely recountings of stories heard from other travelers. Locations like a hot spring in the Persian Gulf were exactly where the explorer said they would be. In China, where he didn’t mention the Great Wall, Michael Yamashita soon learned why: The parts of the Great Wall Marco Polo saw were built before the Ming Dynasty, was only 12-feet tall, and paled in comparison to a walled city Marco saw and wrote about in Banff. When Michael Yamashita traversed this region, the simple wall was being used as part of a sheep pen.

“If Marco Polo was alive today, he would be a National Geographic Photographer.” – Michael Yamashita

As fascinating as the stories of retracing Marco Polo’s travels were, the bigger highlight of “Echoes of the Silk Road” was about a lesser-known explorer who came 150-years later, Zheng He. “The world’s greatest explorer that nobody’s ever heard about,” Michael Yamashita joked, showing a mural of the admiral from his hometown in China which has not been well cared for. Of central Asian origin and raised in a landlocked agricultural village called Kunming, Yunnan, Zheng He was captured and put into service by Zhu Di, the Prince of Yan, who later became the Yongle Emperor. After proving himself to be an accomplished leader in battle, Zheng He was made admiral of the Emperor’s Treasure Fleet, sailing around the world to give gifts and bring back treasures for the emperor. The assignment was for the July 2005 issue in a story titled “China’s Great Armada” by Frank Viviano with photos by Michael Yamashita.

Sailing by ship, Michael Yamashita set out to retrace Zheng He’s voyages, who is known to have gone as far as Zanzibar and some have speculated that he may have even reached the America’s before Christopher Columbus (who did so by mistake as a direct result of Marco Polo’s book). With a fleet of hundreds of the world’s largest wooden ships ever built, retracing the journey provided insight into how the explorer may have helped spread new technologies around the world.

The Treasure Fleet ships grew vegetables on board through hydroponics, a skill the sailors likely learned in Vietnam. In Thailand, Zheng He is worshiped as a god of business prosperity and good fortune. Chinese fishnet technology is still in use today in India, the first nets of their kind were likely gifts from the treasure voyage. And along the Swahili Coast of Africa, it is rumored that shipwrecked sailors from Zheng He’s ships assimilated into the culture and started new families with the locals. An offering made to Sri Pada/Adam's Peak in Sri Lanka (a holy site for Buddhists, Hindus, some Muslims and Christians) can be seen today in the national museum in Sri Lanka, a tablet to asks the world for tolerance of all religions and ethnicities.

Zheng He’s voyages came to an untimely end when he died in Zanzibar and was buried at sea. Over time, China closed off its borders, locking the country within the Geat Wall and limiting trade. But when Michael Yamashita travels to China in the modern era, the ports are busy with large shipping containers, with China once again dominating trade by sea. Back to that t-shirt Michael Yamashita saw in Venice with his photo of a cruise ship at Marco Polo’s port with blurred birds flying in front, he checked the tag: Made in China.