TV Recap: “Gabby Duran and the Unsittables” – “Welcome to the Club” and “Dinas and Dougs”

Disney Channel’s Gabby Duran and the Unsittables returned with two new episodes on Friday, September 17th. This is a two-for-one recap of both “Welcome to the Club” and “Dinas and Dougs.” Enjoy!

Welcome to the Club 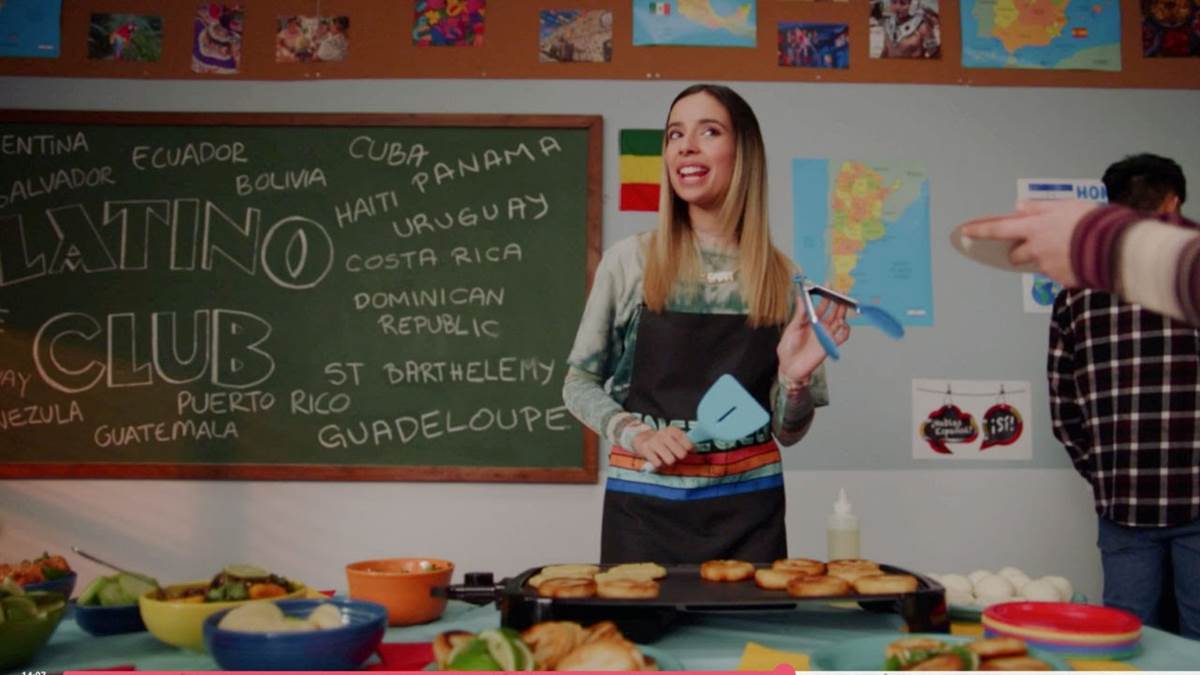 It’s time for Havensburg Junior High’s Heritage Night and Gabby is excited for the free food. When music starts playing in the hallways, she discovers the Latinx Club and meets Santi Garcia, the harp-playing president. Gabby tells Wes that she misses the Latinx community she had in Miami and wants to get more into her culture. When Santi and his crew pass Gaby in the halls, she asks to sign up and they tell her to meet in the Spanish classroom after school.

When Gaby arrives at the Latinx Club meeting after school, she is put in the hot seat and gets asked a lot of questions. She doesn’t know the name of the city in Venezuela her family came from, nor does she know any of the celebrities, tv shows, or foods the club members mention. The last question they ask Gabby is about her favorite food and when she tells them she makes peanut butter and jelly arepas, they laugh and call her a “Gringa.” Later, Gaby goes to Luchachos to vent about it. She walks away determined to find out more about all of the club members’ interests to prove that she’s the most authentic Latina they know.

Earlier, Wes told Gabby that he and Sky have an anniversary date that night and that he made her a candle with all the smells of New York City, which Gabby tells him smells gross. During their date, Sky beams them to Mars for a romantic dinner and Wes feels like his gift isn’t special enough, so he tells Sky the candle isn’t her real gift, which will be delivered by midnight. He goes to Jeremy for help, who takes him to the alien pawn shop where the clerk suggests an exotic plant.

While Wes is dealing with his gift dilemma, Gabby explores the music, shows, foods and content she found on social media about the Latinx Club members. She also calls her grandma to learn more about where her family came from in Venezuela. The next day, the club members are all impressed by Gabby’s knowledge and she is accepted by them.

Wes is anxious the next day about Sky’s gift and he calls her to ask if she liked it. She tells him she needs to break up with him, so he races to her house to find that she has dressed up the plant, named it “Planty,” and it’s her new boyfriend. Sky’s dad recognizes the plant, a Lovazalia Princapecia (love plant), and Wes learns that anyone who smells it will fall in love with it. Since he is a superior telepath, he offers to go and break Sky’s connection to the plant. But when he doesn’t come down, Wes goes to check on him and finds that he, too, has fallen for “Planty.” Wes has his nose pinched with a clothespin to avoid smelling it.

At Heritage Night, Gabby stands at a griddle serving arepas, which everyone loves. She tells the group that it’s her Abeulita’s recipe and when someone asks her for it, she offers to send it to the entire Latinx Club group chat. She asks her phone in Spanish to send it, but she accidentally sends the notes she took about everyone’s interests. They feel stalked and are weirded out. While Gabby tries to plead her case, she tries to grab Santino’s phone and he knocks backward, his harp-playing hands landing on the hot griddle.

Gabby runs into the hallway upset and bumps into her mom, who was running late. She tells Dina what happened and her mom tells her that when she was a kid in Miami, her family wanted to assimilate and only spoke English. But then her friends called her a “Gringa” because she didn’t speak Spanish, so she learned to speak it, but it didn’t help because they found another trait to exclude her, her green eyes. “There’s no one way to be Latinx or to be anything,” Dina tells Gabby, convincing her to go back in the Latinx Club.

Wes tries to tackle “Planty” and ends up bound to a chair by Sky and her father. They plan to invite Wes into their plant-loving world and seeing the candle he made for Sky, he suggests that they set the mood by lighting it. As soon as the flame is struck, it emits smoke and smelling it, Sky and her dad lose their love for “Planty.” Wes apologizes to Sky for the gift of the plant and she tells him that the candle was very thoughtful, kissing him on the cheek. However, “Planty” isn’t gone and as they cuddle, Sky’s father proposes to it.

Gabby apologizes for burning Santi’s hands and for trying to be something she’s not. She quotes what her mom says, but also defends herself by telling the group that learning their interests exposed her to a lot of cool stuff. They agree to forgive Gabby as long as she promises to make them some PB&J arepas. Dina introduces Gabyy and Olivia to her new boyfriend Doug. Both girls are very protective of their mom, recalling some of the unworthy guys she’s dated in the past. They are prepared to put Doug through the wringer to prove that he deserves their mom, who they say is a queen. During dinner, Doug wins over Olivia, but Gabby is not convinced, looking for reasons to not like him.

At Luchachos, Gabby and Olivia see a man who looks just like Doug who picks up a large order of burritos and begins eating one as he walks out. They call out to him, but he doesn’t recognize them and as it turns out, Dina is at the house with Doug right now. The girls follow the Doug with a bag full of burritos to a house. Looking through the windows, they see him remove an ear to scratch a glowing itch. Freaking out, the girls turn around and are caught by another Doug. It turns out to be a house full of guys who look just like Doug and are also named Doug.

Inside the house, Gabby and Olivia learn that these are aliens from a planet called Dougulon XII and all of the Doug’s in the house (each with a different personality) are clones of Doug Prime. They all want to go back to their home planet, but Doug Prime wants to stay on Earth for Dina. Gabby and Olivia make a plan with the Doug clones to help split them up.

Back at home, Gabby and Olivia tell Dina that they don’t like Doug, giving as a reason that he’s too nice and his thumbs look like toes. Dina thinks the girls are worried that the girls will think she has less love for them if she is serious about a boyfriend, but asks the girls to give Doug a chance.

Gabby and Olivia go back to the house of Dougs to share that they weren’t successful in getting Dina to dump Doug, but end up finding that they have cloned Dina. There’s now a Dina with a matching personality for each of the Doug clones and Doug Prime has been locked in a closet by the clones. Gabby fress Doug Prime and apologizes. Suddenly the doorbell rings and it’s Dina. The Dougs and Dinas quickly hide around the room, with Gabby and Olivia taking a spot out of sight. Doug Prime opens the door for Dina who comes in and tells him she needs to break up with him for her girls, but that it’s hard to do because she really likes him.

The next day, Dina comes running into Luchachos because Gabby sent her a distressing text with a skull message and she thought someone was in trouble. The girls get up to reveal that Doug Prime is in the next booth, giving Dina their blessing to keep seeing him and apologizing for getting in the way of their mom’s happiness. Later, Gabby and Olivia go to the Dougs house to say goodbye to the clones, who are returning to Dougulon XII with their Dinas and leaving Doug Prime on Earth. As they teleport, Gabby asks Olivia if it was a mistake to send clones of their mom into space.

While all of this was going on, Wes and Jeremy filmed an audition tape for a survivalist show called “Tame the Wild,” but got locked in Swift’s basement when Jeremy got the password wrong to Swift’s computer. Trapped together for 48-hours along with Jeremy Jr., the boys decide to use their survival skills, but soon turn against each other. But things get really tense when they run out of food and look at Jeremy Jr. as a potential protein, only to find the fuzzy creature capable of growing in size and hunting them both. Swift, who was taking an extremely long bath during all this, comes downstairs just in time, scaring Jeremy Jr. back to his regular size.

The episode ends with a preview of the next episode, which will be Halloween-themed. Disney Channel hasn’t released the episode name, description or air date yet, but from the clip, a creature called the Fright Master comes to town, delivering customized terrors to Havensburg.