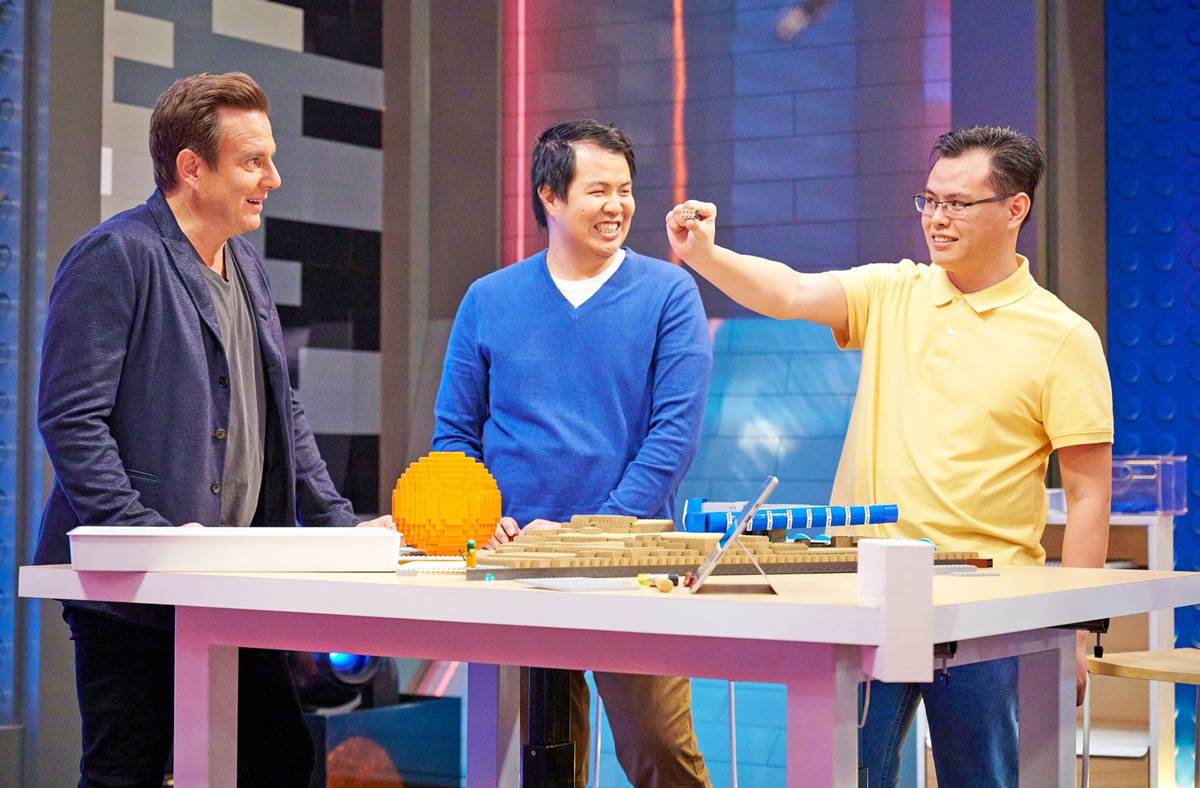 Last week, FOX’s hit reality competition series LEGO Masters wrapped up its second season, and here at Laughing Place we’ve been chatting with all the eliminated teams. The two brothers Zack and Wayne made it all the way to second place, and I had the wonderful opportunity to talk to them about their experience on the show. 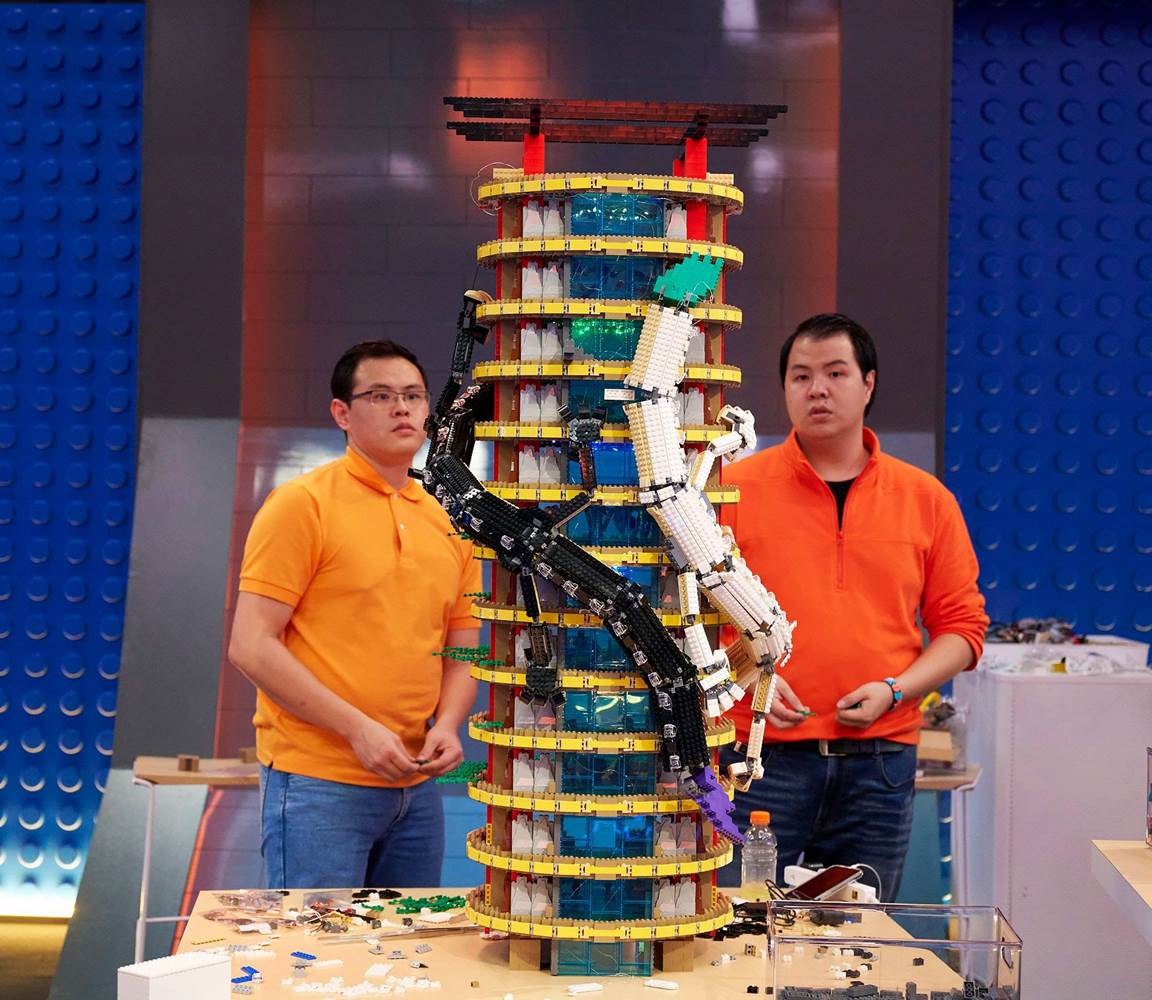 Mike Celestino, Laughing Place:  What was your history with LEGO prior to participating in LEGO Masters?

Zack:  We grew up with a huge bin of LEGO [bricks], when we were kids [that we got at age] six or seven from our cousins.

Wayne:  Our Aunt just dumped a ton of LEGO on us. It was a mix of Blacktron, Star Wars… that type of thing.

Zack:  Then the LEGO sets we usually would buy [were] Star Wars [themed]. And I'd always be trying to add motors and electronics to them. I also liked the Technic LEGO sets, specifically the cars and such. I tried to get those running as well.

Wayne:  It's a funny story. I used to be primarily the guy selecting the LEGO sets. I had some really rare stuff, but then Zack and I were bickering about who gets to keep this LEGO versus vice-versa. And I can happily say that I have become an unintentional financier for his genius because, for every tank he ever made us, I remember where [the pieces were] from, and I remember how much it hurt [to lose them]. But it's okay.

Zack:  Yeah. I’d be taking off all the tan parts from his LEGO Star Wars sets to put into my Desert Storm tanks. [laughs]

Wayne:  Oh boy. My favorite ship of all time was the Slave I from Star Wars, the blue one. This is before it was easily swishable. He offered to buy me another one and I'm like, ‘I'm sorry, Zack. It's because it was so crappy and stupid. That's why I liked it.’ 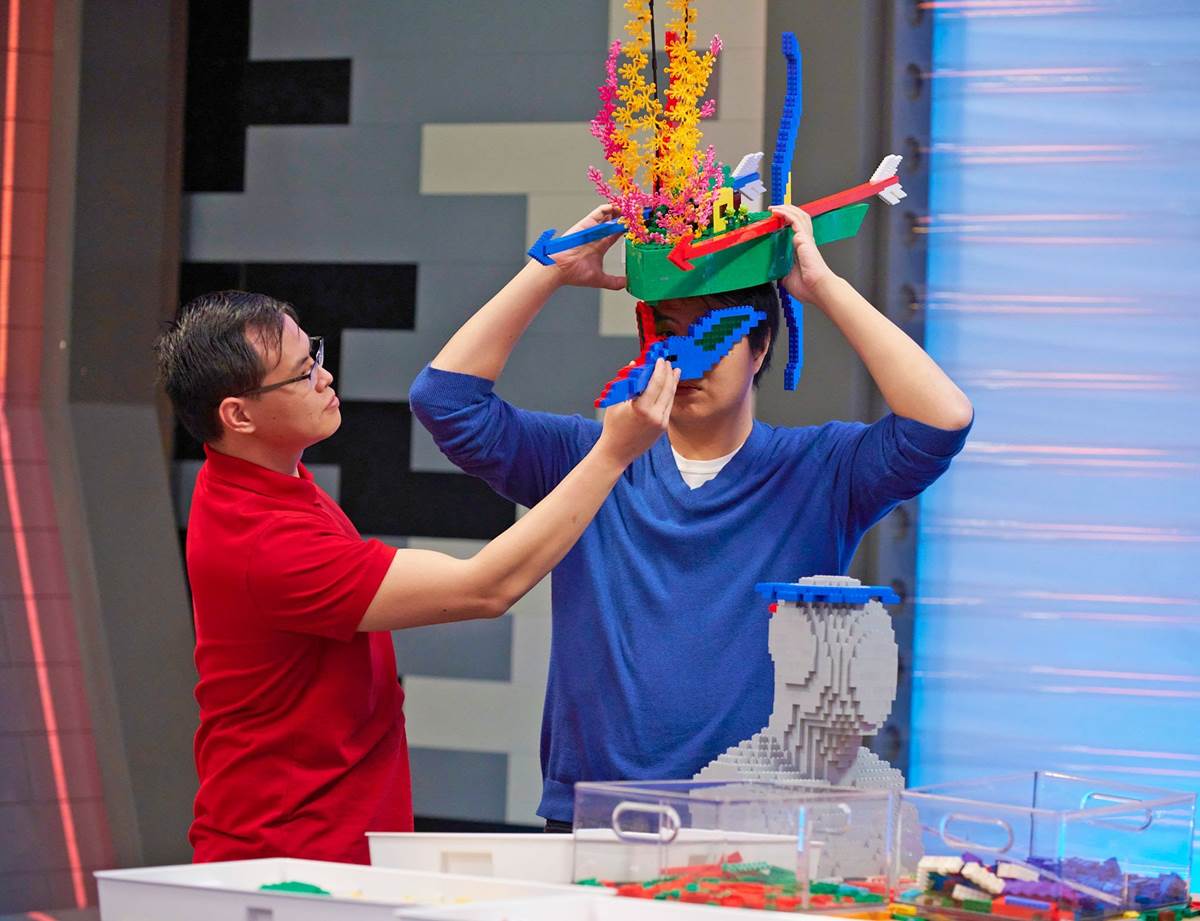 LP:  Once you actually did get on LEGO Masters, what was your favorite part of the overall experience?

Wayne:  I really liked the cast, I really liked the makeup crew, and I really liked the costume crew– very fun people. You always felt like we were all doing this thing to put on a good show together. When all was said and done, these are people I genuinely would like to see again. That's what we have right now: we rented out an Airbnb here in Utah, we watched the finale together, and now we're going to go visit the LEGO store and make some kids' brains melt. That should be nice and fun.

Wayne:  It's so funny. We have this thing called a radius. If we get within a 20-meter radius and they're facing us, you can see the face go up, the jaw drop, and you can hear their voice go, ‘Aw.’ It's nice to know we have an effect on people. 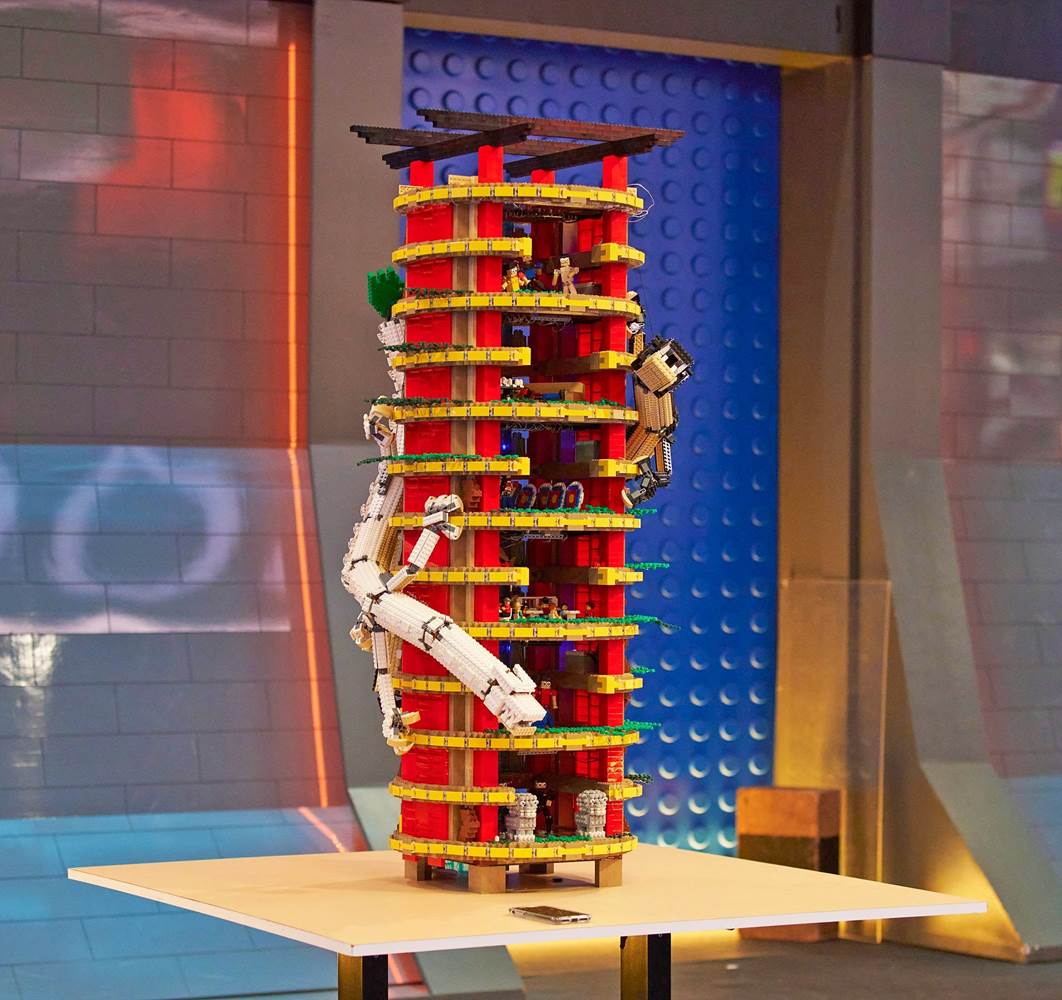 LP:  You came in second place in the finale and the challenge was called ‘Day & Night.’ Looking back on the recording of that episode, if you had to approach it again, is there anything that you would do differently?

Zack:  I tried to accomplish a lot in that challenge, and that doesn't really get addressed a lot on the finale. I wanted really big stuff moving– I wanted the entire thing to be turning in a circle. And then on top of that, the Dragons [were supposed to be] moving as well. [Plus] I wanted it to be really lit up, but it just was not coming together. And then I might have done some more detail work with the pagoda and tried to blend that more with a couple of other ideas. When we were coming up with the pagoda, it was also supposed to be a landscape of a mountainside and waterfall. We kind of just mashed all those ideas into just one build, and you don't really get to see it that much on the show, but it's supposed to be two-sided. One side is a scene of my family, with stories of me and my brother. Then flip it around and it's a waterfall scene where fish are climbing up and they turn into dragons. That's what we were trying to do.

Wayne:  I’d say the main thing is the theme we're trying to go for– that we arrived on the show as dragons. We wanted to leave as dragons [as well], but somewhere along the line I think we had just kind of burned ourselves out a little bit. The previous day, when we were filming the Castle challenge, my friend had literally just passed away, moments before we started filming that episode. The day afterwards, Zack's friend had also passed away from cancer. It's just really killer timing, if that makes sense. I wish it was as simple as saying we were off of our game. It was almost annoying to me– we know what we're capable of and it just felt like there were a lot of things that we wanted to achieve.

Zack:  I guess [we should have] downscaled, right? We wanted it to be this absolute best [build]. Maybe it was just too much for 24 hours, what we were trying to accomplish. So maybe [we should have] scaled back a little bit.

Wayne:  If I had to do it over again, I would love to make a boat. What we could have done was make a really nice boat and have a really nice waterfall.

Zack:  I think we just needed some more time to plan it.

Wayne:  My brother is a genius. That's the thing right there. He was accomplishing a lot of things we didn't think were physically possible. When we get together, interesting things happen. We're going to keep doing interesting things. 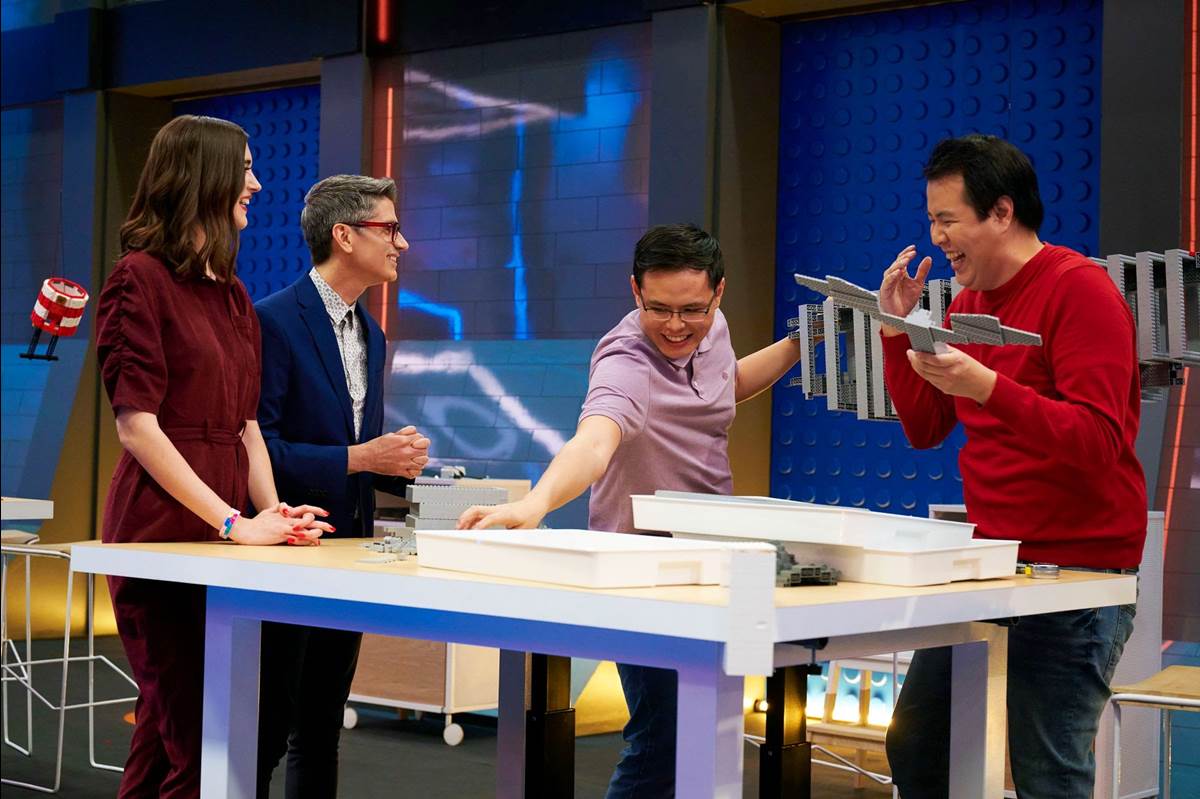 LP:  In the finale episode, you got to watch video messages from your family. How much total time did you spend away from them during the production?

Wayne:  When you are filming as much as we were doing, your sense of time gets a little bit warped.

Wayne:  That's exactly what it felt like, because you really don't get a chance to talk with [your families] the entire time. Our family is super tight-knit.

Zack:  When your friends pass away, you usually want to talk with your family, no one else. You want to be with people you know and trust. And I think that's [what was going through my mind] when I was seeing my family at the end.

Wayne:  Yeah. If the goal was to make us cry, good job. It did. Thanks, production. We shed our tears for this month. LP:  If you had the opportunity to talk with future contestants on LEGO Masters, is there any advice that you would offer them in approaching the show?

Wayne:  Talk to a LEGO Master.

Zack:  Don't feel afraid to say, ‘Hey, I'm thinking about getting onto LEGO Masters. Do you think I have a chance?’ And I'll tell them, ‘Yeah, you definitely have a chance, but definitely watch [the show]. Don't be afraid. Ask for all the advice; they're willing to give it."

Wayne:  I can offer some advice. First things first: $200 worth of blankets. Don't even question why; just do it. You'll thank me later. And then if you know how to get your hands on a real charcoal grill, depending on where you're filming, that could not hurt. Start there, and then afterwards you'll find out. We were filming in Georgia, and when I went there for the first time, it was really cold. I made the mistake of coming in my California uniform. I was wearing shorts. I was just telling myself, ‘It has to be warm in Georgia.’ And no, it was not warm in Georgia. So definitely understand what temperature you're dealing with. We'll start from there.

Zack: Start making a fish bowl of ideas– any idea is a good idea. We put a lot of ideas in the fish bowl. Just have random sketches.

Wayne:  We were hoping to do an ‘Elvis on Mars’ build, if we ever had the chance. That's the one I really wish we had an opportunity to do. ‘What if Elvis never died? What if he just went back home to Mars?’ This would be perfect. [laughs] We [also] have this one where we're playing with Oni, the Japanese demon. Wouldn't it be so funny if you have the story of the three monkeys but instead of three monkeys it was demons? That would be a pretty fun story. I think that's the nice thing: any of those ideas would be useful for LEGO Masters. Now we can do them on our own time, and hopefully people like what we do. The second season of LEGO Masters is available to stream in its entirety on Hulu.