Since the launch of Disney+, Bluey has consistently been in the top 5 of trending content on Disney’s streaming platform. Produced in Australia by Ludo Studio and distributed around the world by BBC Studios, there are few places in that the adorable blue heeler puppy hasn’t made a name for herself. In celebration of the October 1st release of Bluey: The Album on vinyl and CD, I got to speak with composer Joff Bush about his work on the series and why the album’s success has been an unexpected surprise. You can read the full interview and check out the video interview at the bottom of this post. 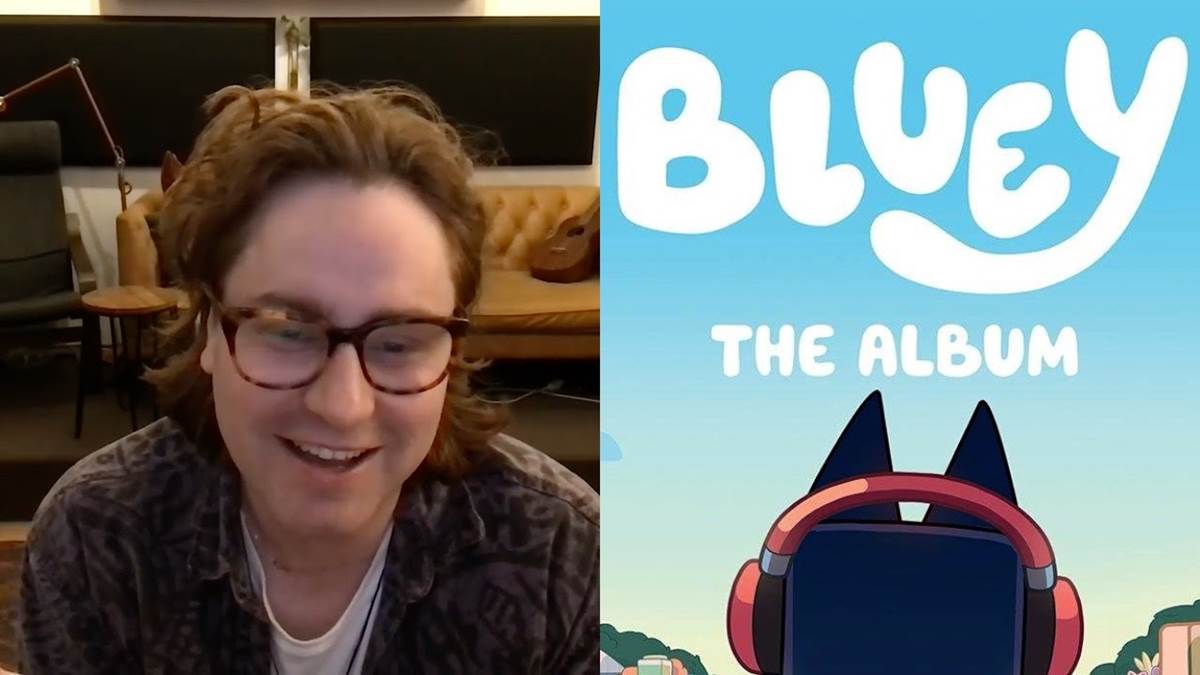 Alex: Bluey has been a huge success, but the music separate from that has been a success. With children's programming, instrumentals don't normally take off like this. What's it been like to have your work embraced by such a wide audience that wants to experience the Bluey music outside of the show?

Joff Bush: You're absolutely right. I think that's been a big surprise is that it isn't in… There is a song at the end, but it's basically an instrumental album. Everything's been a surprise. I'm surprised that I'm talking to you from Australia right now. It's really exciting. But yeah, the response has been amazing. A lot of composers are saying leave our egos at the door and just try and focus on ways to sort of elevate the show. And the show was already great, so finding those, that was the focus. And then when we got the opportunity to do the album, went back through and found that all these tracks that went for about 30 seconds long and wanted to extend them and even during the process of doing the album, we never thought, "Oh, this is going to be popular or a hit." Okay, well, it's an instrumental music album. I hope people like it. But the response has been fantastic.

Alex: You had to take your music that you had composed for the show and expand those into tracks for the album, it's not just a straight soundtrack. So what was that process like? How did you select which tracks were going to be done?

Joff Bush: Well, the first half of the album is focused on the games. And I know from friends who have kids, we knew what their favorite games were. And so we took those pieces like “Grannies” and “Keepy Uppy.” And then I got to extend them and bring in horn sections and string sections. I went a bit overboard with it, I totally blew the budget. I just went crazy with it. And I just got obsessed with that. And then we found there are all these other episodes people love, like “Camping” and things like that. And they were sort of stories. And so we put that at, the journey sort of starts all the games. And some of the tracks may be a little bit too long, but I wanted kids to be able to play them and play the games from the show and have their own imagination around it. Maybe that's why it's been doing well, is that kids can actually play the games while playing the soundtrack…. So there's that and then the story side of it, similar, we just sort of taking these tracks that we'd written for the show and I was able to do everything I really wanted to do, but I didn't have the resources or all the time to do it then. So yeah. I'm not sure… It's so funny looking back on these things and going, "Oh, how did we make that album? How did that even happen?" Because it's such a blur of just getting excited by ideas and "Let's do this. Oh, let's do this." And seeing where it goes.

Alex: You can hear just a few notes of the music and instantly recognize that as Bluey, it has such a specific sound. I was curious to know, how did you find that Bluey musical sound?

Joff Bush: Oh, that's so nice of you to say. And yeah, I think it's one of the first shows where I've… Well, a few shows being similar, but one of the first shows where I've really gone, "This is kind of my sound." I get to use all my sort of broken instruments and things like that. And I think no matter what I write I'll end up sounding like me. But I think for the show there's a lot of live players as well, like musicians, and their talent really adds to it. And they're all such unique players as well. So when they come in and play, they add to that sound and it just sort of comes gelled together and it ended up that way. But it's really hard to put my finger on what it is specifically. I think there's this aspect of, I will use like a $20 second-hand thrift shop guitar rather than a really nice fancy one and try to make that sound good and find things with character that I like and try and incorporate that into the score. But it also doesn't really have that big upfront overwhelming sound that a lot of kids’ shows have. And that's just because of what's on hand for me and what I was liking when I was writing it.

Alex: I was curious to know your background with music. When did your love of music start? What were the sources of inspiration for you that made you want to even become a composer?

Joff Bush: I was never a prodigy kid. I wasn't one of those, but I loved it, like, loved it so much. And when I was about 12, I had a teacher called Ken McLean, piano teacher, and he was also a TV composer, and he gave me the writing bug and he also introduced me to Duke Ellington and others that I absolutely loved, and I still do. And then I started playing when I was 14. I just got obsessed and practiced all the time, just for the joy of it. And when I was 14, I got a gig playing in a restaurant. And I thought I was the coolest person in the world because I was making $20 playing in a restaurant. And I just got obsessed from there, really. And I guess I always loved TV and I love film and it was something I wanted to do by the time I finished high school. I actually started wanting to be a concert pianist, but I wasn't good, I just don't have that talent. I was definitely the worst at what I was studying at university. I was definitely the worst of them, right? And my piano mentor said, "You're just writing all the time. You need to stop and change what you're doing." And then at that time I met a lot of the people, even Daley Pearson, we met when we were both 18 and she's an executive producer at Bluey. And we've been making things ever since so. That's been the sort of journey and I guess everything just landed on things I was obsessed with really.

Alex: There's been so much interest in Bluey: The Album, which was released as a digital soundtrack, that now it's coming out on CD and vinyl. What does it feel like to have people want to have your music as something that they can hold onto? And are you a vinyl guy?

Joff Bush: I love vinyl. I love the ceremony of putting it on. I love playing. I love that you can't skip tracks sometimes. I think that's great. And you can sort of hear the album how a lot of them are supposed to be heard. I mean, obviously, not everyone has access to vinyl, but we did design this album to be played as an album. It does sort of have a through-line and we were really pedantic about how does that key leads onto this key and all this sort of stuff. Just lots of technical little things. We also recorded a lot in the studio next door in all sorts of 70s gear and things like that. So vinyl feels like home. And I also think there's a real nostalgia about it with this is a lot of kids' first album. And so when they've got it, it's almost like a souvenir. You can go, "This is the first album I got, not the first album I streamed." Which doesn't sound as cool, but maybe in the future it will be.

Alex: And it comes with some physical goodies. The CD has some stickers and the vinyl has a poster with it. And that blue vinyl is really attractive.

Alex: Are there any plans for a follow-up album?

Joff Bush: I'm pretty adamant that we'll get it happening. We're working on a plan to do something. If I do it, I really don't want to do a cookie-cutter, just drag things from the show. I really want to make something special, which takes a lot of time. And that's just important to me. I'm sure people will still like it anyway, but I really want to make something that keeps the vibe of the first album. But I'm also right in the middle of season three. So it's really hard to find the time for writing new pieces and then revisiting the old ones. But I'd love to, I'd absolutely love to, and I'm always open for anybody who has any ideas about what their favorite pieces… What must-haves do we have to have on the album? Yeah, they can hit me up. I'd love to hear about it.